Home » Texas ends its mask mandate and says all businesses can fully reopen.

Texas ends its mask mandate and says all businesses can fully reopen. 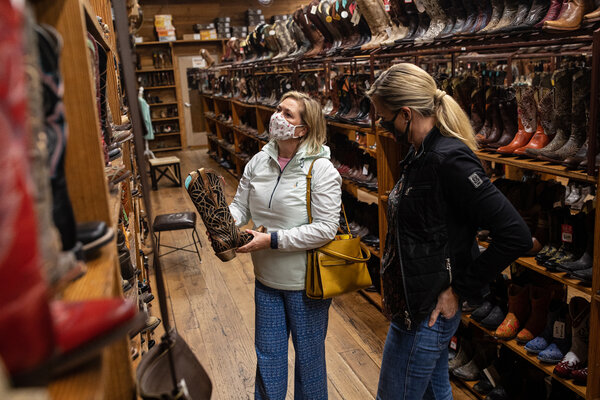 Gov. Greg Abbott of Texas ended his statewide mask mandate on Tuesday and said that all businesses in the state could reopen next Wednesday with no capacity limits. He took the action after federal health officials warned governors not to ease restrictions yet, because progress across the country in reducing coronavirus cases appears to have plateaued in the last week.

“To be clear, Covid has not, like, suddenly disappeared,” Mr. Abbott said. “Covid still exists in Texas and the United States and across the globe.”

Even so, he said, “state mandates are no longer needed,” because advanced treatments are now available for people with Covid-19, the state is able to test large numbers of people for the virus each day and 5.7 million vaccine shots have already been given to Texans.

Speaking to reporters in Lubbock Tuesday afternoon, Mr. Abbott said that most of the mandates issued during the peak of the pandemic in the state would be lifted, but he did not specify which mandates would remain in place. He said Texans could decide for themselves what precautionary measures they want to take to limit the spread of the virus and that top elected officials in each county could reimpose restrictions if hospital capacities passed 15 percent.

“At this time, however, people and businesses don’t need the state telling them how to operate,” he said.

The director of the C.D.C., Dr. Rochelle Walensky, said at a White House virus briefing on Monday that she was “really worried” about the rollbacks of restrictions in some states. She cautioned that with the decline in cases “stalling” and with variants spreading, “we stand to completely lose the hard-earned ground we have gained.”

And the plateauing case levels “must be taken extremely seriously,” Dr. Walensky warned at a briefing last week. She added: “I know people are tired; they want to get back to life, to normal. But we’re not there yet.”

Though conditions have improved from a huge surge over the holidays, the coronavirus is still spreading rapidly in Texas. The state has been averaging about 7,600 new cases a day recently, a figure that has rebounded after a drop in February when testing was disrupted by a severe winter storm. It is among the top 10 states in recent spread, relative to the size of its population, with a daily average of 27 cases for every 100,000 people, according to a New York Times database.

And Texans are still dying of Covid 19 in significant numbers: The state reported an average of 227 Covid-19 deaths a day over the past week.

Mr. Abbott made the reopening announcement on the anniversary of Texas’ declaration of independence from Mexico in 1836.