Home » The Cicadas Are Here. For the Chef Bun Lai, They’re on the Menu.

The Cicadas Are Here. For the Chef Bun Lai, They’re on the Menu.

WOODBRIDGE, CONN. — For Bun Lai, cicadas are mesmerizing to eat, their sweet, bitter flavor reminiscent of walnuts, chestnuts and adzuki beans, and their gently crunchy exterior giving way to creaminess, like a soft shell crab.

Every technique for cooking them “brings out different tones and shades,” he said.

Mr. Lai, 47, is the chef of Miya’s Sushi, his family’s sustainable sushi restaurant in New Haven, Conn. This summer, he is turning his attention to insects.

As Brood X cicadas emerge by the billions in coming months, he will host a series of cicada-centric dinners at his farm in nearby Woodbridge, where he recently shifted part of the restaurant’s operations so he could do outdoor events and cook closer to nature.

Besides being delicious, cicadas align with his mission to encourage diners to eat in an environmentally conscious way. They’re also a part of Mr. Lai’s heritage.

During his early childhood in Kyushu, Japan, his summertime memories included “climbing up trees, following the song of the cicada” to catch one, he said. In that country, cicadas symbolize summer and rebirth. 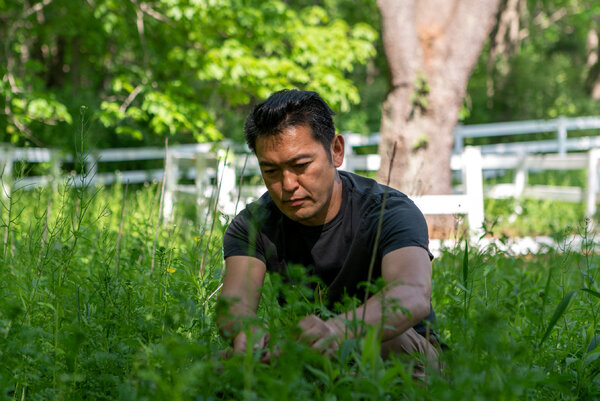 His mother, Yoshiko Lai, who founded Miya’s Sushi in 1982 and grew up in the Kyushu countryside, said that eating bee larvae was commonplace when she was a child.

Cicadas are consumed in many countries, from Mexico to Thailand to the Democratic Republic of Congo. They are rich in protein, less expensive than many meats, land efficient and because they emerge in outsize numbers, eating them does not tend to harm their existence. Mr. Lai’s hope with these dinners is to pay homage to the global prevalence of cicada consumption while normalizing insect eating in the United States, where the practice is often stigmatized.

“On three different continents, people love to eat insects,” he said. Indigenous people the world over have consumed the cicada. “They didn’t eat it because it was starvation food,” he added, but because it tasted good.

While Mr. Lai enjoyed catching insects during his childhood, he didn’t actually taste one until he attended a 2000 exhibit on insect eating at the Yale Peabody Museum of Natural History. He ate steamed rice with crickets. “I thought it was really cool,” he said.

In the summer of 2013, when Connecticut was a hot spot for Brood II cicadas, Mr. Lai — fresh off a James Beard award nomination for Best Chef: Northeast — declared he would be serving them to diners, roasted and tossed in kelp salt. The announcement was widely reported in the news media, but often in a skeptical or disparaging way. “So while our ear drums and gross-out muscles are getting an extra work-out,” one article read, “at least we can bask in the knowledge that we won’t go hungry.” On “Saturday Night Live,” Amy Poehler, then an anchor for the show’s “Weekend Update” segment, said Mr. Lai was “trying to get fired” by serving cicadas.

It was a sensationalizing “of something that holds profound meaning to nature, and to other people,” Mr. Lai said.

And while there are commercial insect products in the United States, many are geared toward masking the flavor and appearance of the bugs, from cricket brownie mix to Cheddar cricket chips.

Emily Weinstein has menu suggestions for the week. There are thousands of ideas for what to cook waiting for you on New York Times Cooking.