‘The jabs are working’: Only three fully vaccinated people hospitalised in UK with Delta variant

London: Fully vaccinated people make up a tiny fraction of those being hospitalised with the new Delta variant of coronavirus, new figures show, giving officials more confidence in the success of Britain’s world-leading rollout.

Of the 12,383 people infected with the variant, which was first detected in India and has also been identified during the most recent outbreak in Australia, 464 sought hospital care and 126 were admitted.

Of those 126, some 83 had not been vaccinated at all, 28 had received only one shot and just three had been fully vaccinated with two doses. 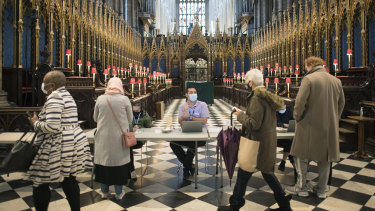 Hancock made the announcement as scientists work to calculate how much more transmissible the variant is, whether it causes more serious disease, and whether it has a better chance of evading vaccines.

British scientists believe the Delta mutation could be 40 per cent more contagious than the previously dominant UK variant, which also had a higher level of transmissibility than the original virus which caused tens of thousands of deaths in the UK last year.

The new variant makes up the vast majority of new infections in Britain.

Confirmed daily cases fell from a high of nearly 60,000 in January to low of just over 2000 last month, but have crept back up to about 5000 as the toughest elements of a national lockdown are swept away.

Nearly 76 per cent of adults in the UK have had at least one shot of vaccines by AstraZeneca, Pfizer or Moderna, and 52 per cent two doses.

“Every day in the UK at the moment, there are 4393 cases,” he told reporters. “That is in a country that has a 75.8 per cent vaccination on first dose.”

However the data released by Hancock shows the vast majority of new cases do not require hospitalisation and those who are in hosptial may have avoided admission had they been double-vaccinated sooner.

The three fully vaccinated people hospitalised with the Delta variant represent 0.02 per cent of cases, and 2.38 per cent of those admitted for treatment.

“Despite the rise in cases, hospitalisations have been broadly flat,” Hancock said. “The majority of people in hospital with COVID appear to be those who haven’t had the vaccine at all.

“We should all be reassured by this because it shows those vaccinated groups who previously made up the vast majority of hospitalisations are now in the minority.

“We have to keep people coming forward to get them and that includes, vitally, that second jab which we know gives better protection against the Delta variant.”

Preliminary analysis by Public Health England recently suggested there might be a 17 per cent reduction in the effectiveness of AstraZeneca and Pfizer vaccine against symptomatic disease caused by the Delta variant compared to the British (variant known as Alpha), but only a modest reduction in effectiveness after two doses.

The UK will announce next week whether the final stage of unlocking can go ahead later this month as planned.

Prime Minister Boris Johnson will make vaccinations a key topic at this week’s G7 summit in Cornwall by asking world leaders to sign up to a pledge to vaccinate every person in the world by the end of next year.