Home » World News » The one New Year’s resolution I’ve kept: a glorious kilometre every day in an ocean pool

The one New Year’s resolution I’ve kept: a glorious kilometre every day in an ocean pool

After the dystopic world of 2020 when the entire world turned upside down, I approached 2021 with a distinct focus. To aim for a resolution that was both doable and practical and didn’t involve giving up the little pleasures of life. I resolved to swim a kilometre in a local ocean pool every day. 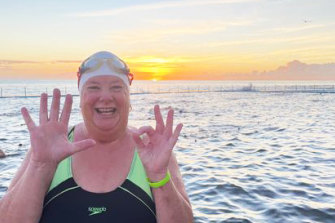 DiAnne McDonald kept one New Year’s resolution this year: to swim a kilometre in an ocean pool every day in 2021.

The first few months were effortless. I would arrive early to claim my lane and follow the local etiquette of swimming along the clearly marked white line. The first lap was always the hardest, pressing the newly awoken body to adjust to the rhythm of freestyle. Each morning began the same way, forcing my body to co-ordinate arms and legs, sometimes flailing in the water like a graceless dugong; other times being hit by the voluminous high tide as if I was a drowning plastic bag. But I kept at it.

The summer months brought the crowds. Teacup humans with their already morning-weary parents would gleefully sample the water, squealing their delight as tiny waves would wash over them. Along the ocean pool wall, the regulars gulped for air as the tides changed and water gushed over the edge engulfing all in its wake. The mature ladies with their swimming caps adorned with garish pink flowers would gently bob like teabags in the pool, jiggling and dangling, a ritual more akin to gossiping and laughing than actually swimming.

As the seasons changed, so did the swimmers. The small group of regulars were there, day after day, lap after lap, following that same white line. The water chilled as the temperature outside dropped but devotion to the ocean remain undimmed. Through chattering teeth, howling wind, driving rain and layers of hastily thrown-on clothes we would all laugh and convince ourselves it was the best way to start even the coldest winter morning. And over time, I realised we were right.

Not only did my resolution make me love the water even more, but I have also seen every single sunrise this year. There is something singularly spectacular watching the sun rise out of the ocean. Some mornings there are strips of magenta turning into the vivid yellows. Even on a grey day watching the light change reminds me just how insignificant we all are, in contrast to the magnificence of the natural world around us.

Outsiders look at swimming as a solo isolated activity. In contrast, we gather like Shakespeare’s band of brothers. Caps are pulled on tightly to protect hair, for those who still have it, and goggles are adjusted to deal with the tidal changes in the water. Damo is always first, particularly if he’s been up overnight watching UK football. Ron arrives with his flippers claiming the outside lane. Thomas and his nameless mate arrive, with their friendly rivalry swapping laps and swimming as smoothly as Thorpey.Julia and Danielle are always up for a chat as they walk their laps before starting work in the local aged care facility.

At 85, Margaret arrives for a quick float before heading back to the hospital to see her beloved terminally ill husband. Ian arrives riding his bike, as part of his morning triathlon-like routine, before diving in claiming the only spare lane. Once done we share a camaraderie based on water and air temperature, and as the events of the year unfolded, the ways we would rule the world.

DiAnne McDonald is a drama teacher when she is not swimming.