London: The clue was in the last-minute nature of the cancellation of the Queen’s attendance at Sunday’s service of Remembrance at the Cenotaph.

The decision went to the wire precisely because the 95-year-old monarch had clearly been so keen to attend what has always been a sacrosanct date in the royal diary.

For the truth is, no one will be more frustrated by her recent spell of ill health than the Queen herself. 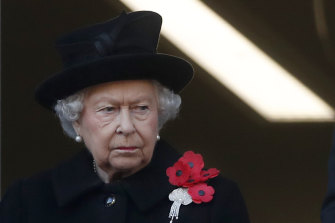 Britain’s Queen Elizabeth II attends the Remembrance Sunday ceremony at the Cenotaph in London in 2018. Credit:AP

News that she has now sprained her back – after she was spotted using a walking stick for the first time in 20 years last month – lends more weight to the theory that Her Majesty’s issues are largely mobility-related.

As Buckingham Palace admitted with regard to the walking aid, which the sovereign used to attend a Royal British Legion service at Westminster Abbey on October 12, the concession to her advancing years was made for the monarch’s “comfort”.

But the trouble is, the Queen prefers to live her life outside of the “comfort” zone of most people her age and much younger. 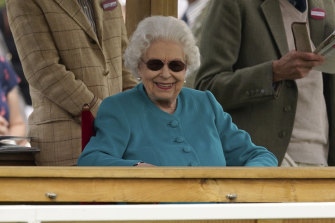 Until she cancelled a planned two-day visit to Northern Ireland after advice from her doctors that she should “rest for the next few days” on October 20, the Queen was still walking her dogs, riding her horses and happily driving herself around the grounds of Windsor Castle. It is what she has always done.

Having “hated” lockdown, and the restrictions it brought to her personal and professional life, she will be loath to face yet more mollycoddling which could see her prevented from doing the very things in life that she loves.

The Queen has enjoyed riding since childhood and is closely involved with the welfare of the horses she owns for breeding, riding and racing. In September, it was reported that she had had to stop taking out her horses due to “discomfort” and was “determined to get back in the saddle after some rest”.

Clearly, part of the reason why doctors are now urging her to be so cautious is because she is keen to get back to the routines she has enjoyed throughout her nearly seven decades on the throne.

Horses are so important to the Queen that she marked the end of the first lockdown in June 2020 by agreeing to be photographed riding a 14-year-old fell pony called Balmoral Fern.

Beaming as she took to the saddle in the grounds of Windsor Castle, it was the first time she had been seen outside since locking down with the Duke of Edinburgh and a small retinue of staff, dubbed “HMS Bubble”.

As a lifelong dog lover, the Queen surprised her family and aides when she decided to take on two puppies in the new year – a dachshund-corgi cross (dorgi), Fergus, and a corgi called Muick.

Sadly Fergus subsequently passed away but she still has Muick and her old dorgi Candy, which she regularly walks around Windsor Great Park.

Although Buckingham Palace has stressed that the Queen’s back sprain is unrelated to her medical team’s recent advice to rest, and that she has not received hospital treatment for the injury, it is no secret in royal circles that in recent years she has not been as mobile as she used to be, suffering particularly from knee and hip pain.

In 2003, she underwent a successful operation to remove a torn cartilage from her right knee, but like anyone five years shy of their 100th birthday, she suffers from joint pain.

As someone whose mantra has always been “I need to be seen to be believed”, the Queen will be desperate to get back to business.

But with the Platinum Jubilee, next summer’s celebration of the 70th anniversary of her reign, fast approaching, doctors will want to do everything in their power to ensure that the grandmother of the nation is in the finest fettle possible.