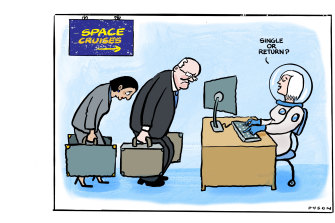 To submit a letter to The Age, email [email protected] Please include your home address and telephone number.

While it is true that the vaccine rollout has been ineffectual, the rapidly escalating COVID-19 outbreak in Sydney is largely due to those in charge playing politics. The people of New South Wales should be outraged they are in this situation through the egotistical machinations of the leaders of their state government and federal government trying to prove that a Liberal-style lockdown is better than a Labor-style one. Hang your heads in shame, Gladys Berejiklian and Scott Morrison.
Julie Perry, Highton

Fighting a war we are still not prepared for

The enemy army is marching down Pitt Street in Sydney. It is not a race. It is a war. A war we have known was coming for 18 months. A war we are still not prepared for. A war we may well yet lose, victims of apathy, smugness, selfishness, political games, disunity and penny-pinching on vaccines and quarantine. Shame. Tragedy. Not yet inevitable, but definitely unforgivable.
Ian Powell, Elsternwick

Thank you to education unions for lobbying for teachers to be prioritised for vaccinations. We want to return to the classroom when it is safe. Our children want to be back with their friends who make them happy. In what are confusing times, where conversations involve vaccinations, isolation, lockdowns and letdowns, friends are of comfort to them.

To our Prime Minister, as our leader and as a parent of school-aged children, please prioritise vaccinations for educators. Inject us, protect us and get everyone back to a school environment that is safe.
Louise Cass, Camberwell

Masks to protect our staff and our customers

Dan Andrews, I am fed up with customers coming into my shop saying that they are exempt from wearing a mask. Now that NSW plans to bring a requirement of medical proof for not needing to wear a mask, can we have this in Victoria too. Please.
Anne Tyers, Richmond

Do you want the good or the bad news first?

Federal Health Minister Greg Hunt says the “good news” is that the Therapeutic Goods Administration has approved the Pfizer vaccine for 12 to 15-year-olds. He forgot the punch line. The bad news is there is not enough Pfizer vaccine available.
Bruce McQualter, Richmond

What an absolute rock show these NSW and Victorian press conferences are when it comes to questions. It is simply a case of whom among the reporters can shout the loudest and longest. Surely in this day and age a government media adviser could set up a system that makes it more efficient. How about each reporter gets a number on arrival, the Premier calls out the numbers in sequence and the reporter gets to ask a question, plus one supplementary question. If required, go through the sequence again until the questions are exhausted.
Chris Grigsby, Beaumaris

Pharmacists are ready and waiting to assist

The Prime Minister has finally announced that appropriately trained pharmacists will soon be able to carry out COVID-19 immunisations. Pharmacists have been ready to do this for months. Another instance of Scott Morrison’s slow response to need.
Louis Roller, Fitzroy North

A question to the NSW Premier: What happened to your “gold standard” contact tracing system? It was easy to boast when others struggled, but at the moment you and your team seem to have no answers. A total lockdown and curfew is required to bring this Delta strain under some control. Your lack of action is holding the nation back.
John Tingiri, Mornington

An apology, if credible, should be given as close to the recognition of the fault as possible. For a politician, a delay until significant falls in popularity appear to mar the appearance of a really effective mea culpa.

Also, when it is contained in a rush of mitigating issues rather than be allowed to stand in its own space, and it comes in a vocal tone at odds with the words uttered, the mere use of “sorry” itself means little.

While it is always good to hear the word “sorry” from a politician, in the words of my golfing friends/opponents when commenting on a crucial missed putt: “Please work on your sincerity.” Scott Morrison needs to take some lessons in delivery.
Peter Evans, Bentleigh East

Did Scott Morrison apologise for not ordering sufficient quantities of vaccines? No, of course he did not. It was a classic “footballer’s apology”: If I offended anybody, I am sorry.
Leonie Millar, Ripponlea

The Prime Minister’s “apology” is like my saying “I am sorry the Australian softball team lost to Japan”, which in no way is me admitting that I caused the loss.

It is also interesting to listen to Gladys Berejiklian in her daily press conferences, the theme being “expect more cases because people are doing the wrong thing”. No apology for, or acknowledgement of, her government’s responsibility for not locking down earlier or for why the lockdown conditions are still very loose. Another example of political decisions trumping expert medical advice.
Phil Mackenzie, Eaglemont

Speeding up the rollout

Why aren’t local government vaccination teams, who are trained and experienced, not being utilised in the pandemic?
Susan Rogan, Williamstown

It is a lockdown and citizens have to work and study at home, while nursing loneliness, stress and often disrupted sleeping patterns. Meanwhile, the workers next door, with their bulldozing team in the backyard, have their rap music competing with their roaring machines. Does anyone have an ounce of respect these days?
Jennifer Minter, Blackburn

The next race has begun

Congratulations, Scott Morrison, on finally acknowledging that the “not a race” comment was inappropriate. If the rollout can be completed as planned, the next race is that we will need booster doses, preferably with a second generation mRNA vaccine that provides greater resistance to variants. Europe and other countries have started procurement of these booster doses. However, Australia does not seem to be participating in the race for them or even aware that this next race has begun.
Dr Guy Toner, Brighton

How to avoid lockdown

Can anyone remember the proposed, purpose-built quarantine facility at Mickleham? How is it going and why is it not finished? Aargh!
Peter Molina, Brighton East

It is extremely disappointing that the Victorian government has refused “bubble” permits to arts organisations to rehearse shows for performances once lockdown lifts (The Age, 23/7). If COVID-safe protocols are followed, then we need to encourage and assist our arts community to return to the stage as soon as possible otherwise, many wonderful artists/performers will leave the arts to find other work.
Kate McCaig, Surrey Hills

At a time when the AFL and other sports are continuing, it is no wonder the arts industry is frustrated. The sweeping rejections and cancellations among the industry, especially music and theatre, are disheartening and symbolic of a country that places a focus on sports over the arts. Both bring joy for the professionals and consumers alike. With major cities in lockdown and individuals undergoing the mental duress that come with this, we need the arts now more than ever to lift and inspire us.
Stephanie Ashworth, Pascoe Vale South

Facing up to bullies

Well done, Greg Baum, on calling out John Coates’ appalling “leadership” style (Sport, 23/7). How many people in senior positions do we see who are just like this, but no one is game to call them out for what they really are?
Steve Malcolm, Ringwood

The ignorance of John Coates’ performance at the press conference astounded me. His was textbook, bully-boy behaviour. Some commentators have said he humiliated the Queensland Premier.

Actually, he went much further. He demeaned his fellow Australians and infantilised us in the eyes of the watching world by trying to parade muscle, leaning back in his chair and looking proud of himself. A man of such immaturity should not be representing us in the 21st century.
Susan Cowley, Caulfield South

In defence of Coates

John Coates says: “The Premier and I have a longstanding and very successful relationship and we both know the spirit of my remarks. She has given no indication to me that she was offended in any way.“

This reinforces his earlier explanation that his remarks were taken out of context. He also explained the Premier had been under pressure from some sections of the media not to attend the opening ceremony.

Although Coates’ suggestions to the Premier were delivered in imperious tones, the target audience seems to have been the media, something some commentators have missed. I would hope they will take his explanation on board and allow Annastacia Palaszczuk to carry out her responsibilities without misguided and angst-riddled media pieces.
John Fitzgerald, Glen Huntly

Allow all schools to excel

It has been heartening to see The Age’s acknowledgement of “Schools that Excel” this week. The professionalism of teachers and the resilience of students are exemplary. But we should not overlook that while “academic disadvantage created by the pandemic” (Editorial, 21/7) is real, it is but a subset of the ongoing structural disadvantage that is seemingly taken for granted in education policy and funding. The very notion of “disadvantaged schools” is shameful. It does not have to be that way, but somehow we acquiesce.
Jim Spithill, Ashburton

Where funding should go

A voice from the party pooper: imagine how many high-quality maths teachers we could employ for those Olympic billions, to boost our presence on the science and engineering map instead of the tourist map.
Ralph Böhmer, St Kilda West

Why is Australia able to plan for the Brisbane Olympics in 2032, but not for effective reductions in the atmospheric carbon dioxide level? I wonder how much the changing climate will adversely affect the Games.
Andrew Rothfield, Northcote

Federal Environment Minister Sussan Ley objects to a duty of care to Australian children (The Age, 23/7). Who does she think she is working for – the coal mining industry? Our government is responsible for this country’s shocking failure with regard to a practical climate policy when the effects of inaction are being clearly seen world-wide. Our children are showing the only leadership on offer in Australia, and deserve our support and thanks.
Mike Francis, Fitzroy

Apropos the recent discussions regarding gender-neutral language, my daughter rang me yesterday and said: “Hi, birth person, how are you today?” I answered: “Hi, financial drain, I’m well thank you, and you?“
Leah Shaw, Melbourne

A question of safety

If Foreign Affairs Minister Marise Payne is considering sending Australians back to Afghanistan, maybe she needs to check with the Taliban first.
John Quinn, Avoca 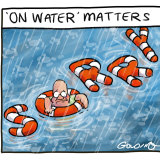 The PM may well have said “sorry” but it was not an apology.
Mary Wise, Ringwood

“Sorry” seems to be the hardest word. And “blame” the easiest. What a sad and sorry lot we’ve become.
John Skaro, Malvern

Pollies, saying “sorry I stuffed up” will get you more respect and support. Gladys, please take note.
Veronica Dingle, Brighton

John Coates, I don’t buy it. With your arms folded you were talking at the Premier, not to her.
David Price, Camberwell

Has Coates seen fit to apologise to Palaszczuk or is he too small for that?
Marlies Johnson, Balwyn

And the winner for mansplaining is John Coates.
Sue Tuckerman, Kew

Palaszczuk should consider herself lucky Coates didn’t give her 100 lines of “I must not think for myself”.
Barrie Bales, Woorinen North

Despite its flaws, the Olympics brings together most of the world’s nations and is watched by a huge number of people.
Phil Lipshut, Elsternwick

Chris Scott, it’s easy to explain. Geelong wins too many games at GMHBA to hold the finals there.
Graham Fetherstonhaugh, Carlton North

Please mandate that when we talk about the cost of a lockdown we also consider the cost of not locking down.
Jane Farago, Toorak

The Age’s editor, Gay Alcorn, writes an exclusive newsletter for subscribers on the week’s most important stories and issues. Sign up here to receive it every Friday.