Many Australians are furious about how difficult it is to buy rapid antigen testing kits, price gouging and long lines at PCR testing stations with their experiences marring summer holiday plans.

Today The Age and The Sydney Morning Herald asked readers of the national news blog for their experiences seeking out rapid tests and at testing lines and responses flooded in from Brisbane to Sydney and right down to Phillip Island in Victoria’s south. 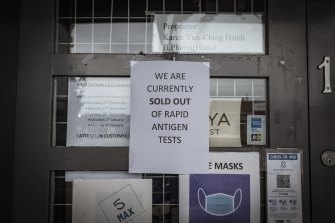 A sign posted to the door of a pharmacy on Nicholson Street in Carlton informs customers it has sold out of rapid antigen tests.Credit:Chris Hopkins

Prime Minister Scott Morrison ruled out free rapid tests again this week, despite many people needing them to be allowed back to work.

Here is a selection of responses, some of which have been edited for brevity, style or typos:

“I have made 18 visits to a number of pharmacies and shops over the last three days. I have not managed to find one single test. So off to work it is. The whole situation is a farce when it is cheaper to buy RATs online and have them sent from Europe! Disgraceful.”

“I spent two days looking and can’t find any [rapid testing kits] on the Central Coast NSW. I can’t be bothered to wait hours for swab test again just to be turned around like today. Big stuff up Dom [Perrottet]!”

“Two of us need RATs because our granddaughter has been diagnosed as positive from a PCR; she and her family of parents and two siblings were staying with us over Christmas. We tested negative to a RAT on day one, when they left to go home but as ‘close contacts’ we are required to test negative again on day six or else continue in isolation.

“We have no symptoms but cannot get a RAT in our hometown. We ordered two from the local pharmacy at $20 each, but they have not yet received them.

“We cannot get a PCR. We can’t leave our home. Even if we could get a PCR, how long before we would get a result? Our granddaughter’s test took five days to be confirmed. I feel really angry that I am confined to home, cannot go to the Foto Biennale in Ballarat, which was my plan, and it closes this weekend. We should have been able to get a RAT at a reasonable price given the rules which have been imposed on us. We are going to have to shop for food by tomorrow [Wednesday] but technically this is not allowed.”

“I have a disability and am an NDIS recipient. I need regular RATs to attend medical appointments in a small town. Even to get my life-saving INR and blood-thinning results [I need tests] three times per week. The only local pharmacy that had stock had my name down for five tests today. However, sold my tests to unknown people. 300 tests gone in 30 minutes. I only saw eight people enter the store at this time. I was waiting with my carer with a catheter in and my walker. Only to be told they weren’t using the list anymore, my tests had been sold. It’s first in, best dressed. No apology, no understanding. This is deplorable.”

“We are a family of six but are restricted to purchasing the same two box limit as couples or smaller families. Two boxes of two does not allow us to test our whole family. Wishing limit was based on a number of people on a Medicare card or something similar to make it equitable.”

“My mother and I drove 60 kilometres and spent about $40 in road tolls just to get a pack of two tests to fulfil interstate travel requirements.”

“I’m trying to get one between Coffs Harbour and the Tweed (to no avail) in order to return to Queensland which has made a law it is impossible to comply with.”

“There is nowhere in Bondi Junction to buy RATs. I checked every pharmacy, supermarket and vitamin store. Cannot remember the store count. It is devastating to me and my wife. We have been thrown to the wolves. Absolute lack of leadership. State and federal governments have abandoned protecting their citizens.”

“We attended a Christmas party and another person at the party developed COVID symptoms the day after. We self-isolated, but we’re unable to get a PCR done (due to queues and testing centres being shut). Between the other people at the party we would have called over 30 pharmacists for an RAT, but all were sold out. One person managed to find one RAT and was charged $30. We never ended up completing a RAT. The person who had symptoms was confirmed as COVID-19 positive (seven days after having their PCR test). I have ordered a box of 25 RATs, but they are not expected to be delivered for another two weeks.”

“I went to the first chemist, none. They couldn’t say when more would be in. Likewise, second chemist. Then heard from a friend about ones in Fitzroy North. I lined up for 20 minutes. Feel fortunate to have got some. It seems like luck and I can’t imagine how the elderly, those with mobility or financial issues would deal with it all. I’m not symptomatic, but was with a relative yesterday who is unwell today.”

“An Instagram account bondi_lines has posted RAT locations. I’ve bought expensive singles ($15 each) so I could test before visiting vulnerable family. I found a two-pack today ($25), but the pharmacy (sensibly) limited sales to one per customer.”

“I went to five shops/pharmacies today. No stock available and stores unable to give information about availability. Poor signage and information by stores.”

“We live on Phillip Island. The population has swelled four-fold with party people. No RAT tests and drive-through [testing] has shut down for a week, maybe more. My daughter feels sick and has a sore throat. What do we do government? Just wait it out?

“PS Booster shots are not available until March. Thanks government, good job.”

“I have tried every website and local store to buy a RAT kit so my son (who is a close contact) can test to get out of isolation on Thursday and go back to work.”

“My dad lives in Brisbane is in his mid-70s and has been presenting with mild COVID symptoms for several days – which in the past has been allergies. The nearest open testing facility to him in the inner west is 15 kilometres away – as most private centres are shut. He queued for three hours for PCR testing at the Royal Brisbane Hospital on Monday, only to be turned away at 7pm, when testing was supposed to occur until 9pm. He arrived at 5.30am this morning, Tuesday, ahead of the centre opening at 7am, only to be told at 7.30am that “only severe cases would be seen.” We have been to 11 chemists and supermarkets to find RATs and have sourced nothing.”

“Here in Randwick, NSW, most pharmacies have signs posted to say they do not have any rapid antigen tests in stock but hope to obtain some in the coming days. I, fortunately, don’t need them. I’m into being prepared for emergencies, so when I saw a good deal on a seven-pack a few weeks ago, I bought it.”