‘Papa!’ Adorable moment three-year-old girl hears her soldier father’s voice and runs giggling into his arms as he returns home after seven months away

This is the moment a toddler heard her soldier father’s voice for the first time in seven months and ran into his arms in a tear-jerking reunion.

Derick Nazario, 25, had left wife Naiomy Cores, 24, and their three-year-old daughter, Skye, at home in Florida when he set off for basic training in Fort Leonard Wood, Missouri, before being moved to Colorado months later.

Footage filmed by Ms Cores shows the toddler hearing someone outside the front door repeating ‘my beautiful Skye’.

Suddenly the little girl recognizes whose voice it is and cries ‘Papa!’ before running towards her father, laughing with excitement, as he enters the house. 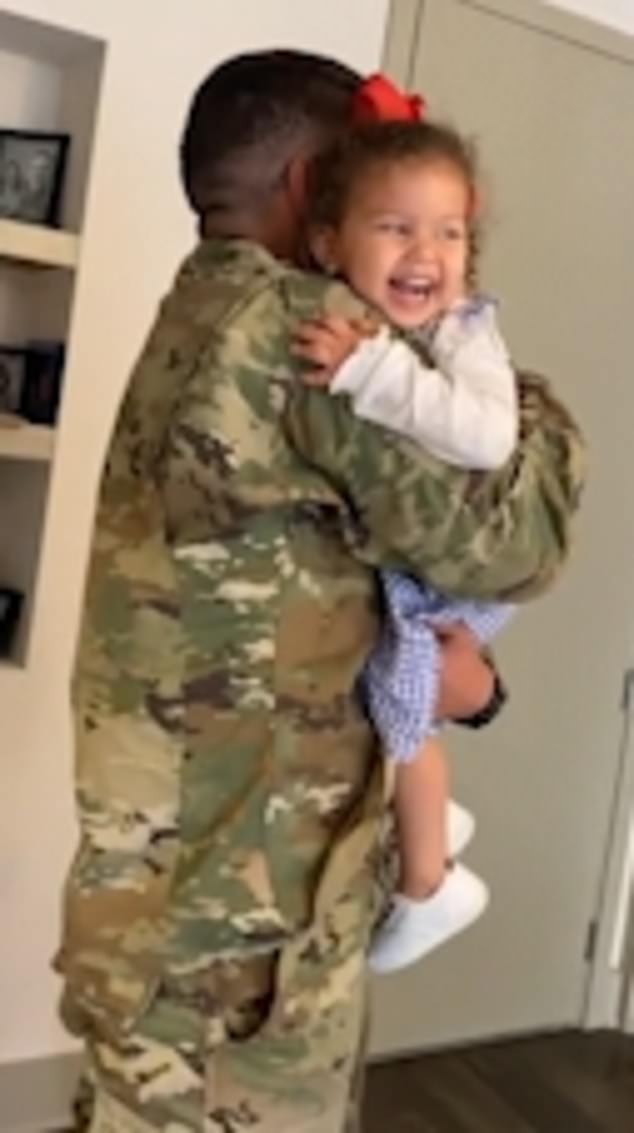 Derick Nazario, 25, left home in Florida for basic training at Fort Leonard Wood, Missouri, and was reunited with his wife Naiomy Cores, 24, and their three-year-old daughter, Skye, seven months later

Ms Cores, from Bayamon, Puerto Rico, set up the touching moment when she knew her husband was due home

Whilst Mr Nazario – a Private Second Class in the U.S. Army – was away from their home in Florida, Skye cried for her father at night and would always say how much she missed him.

Ms Cores, from Bayamon, Puerto Rico, decided to set up the surprise when he was due home and travelled to her mother’s home in Frisco, Texas, as it was equidistant between their family home and the Colorado army base.

The reunion took place in October 2020, but Ms Cores did not share the footage until this year in a throwback post on social media which quickly went viral, receiving millions of views.

Recalling Skye’s amazement, she said: ‘I felt like crying when I saw her reaction because I knew how much she missed him.

‘After all the nights she went to sleep crying out for him and finally they were going to sleep together again. 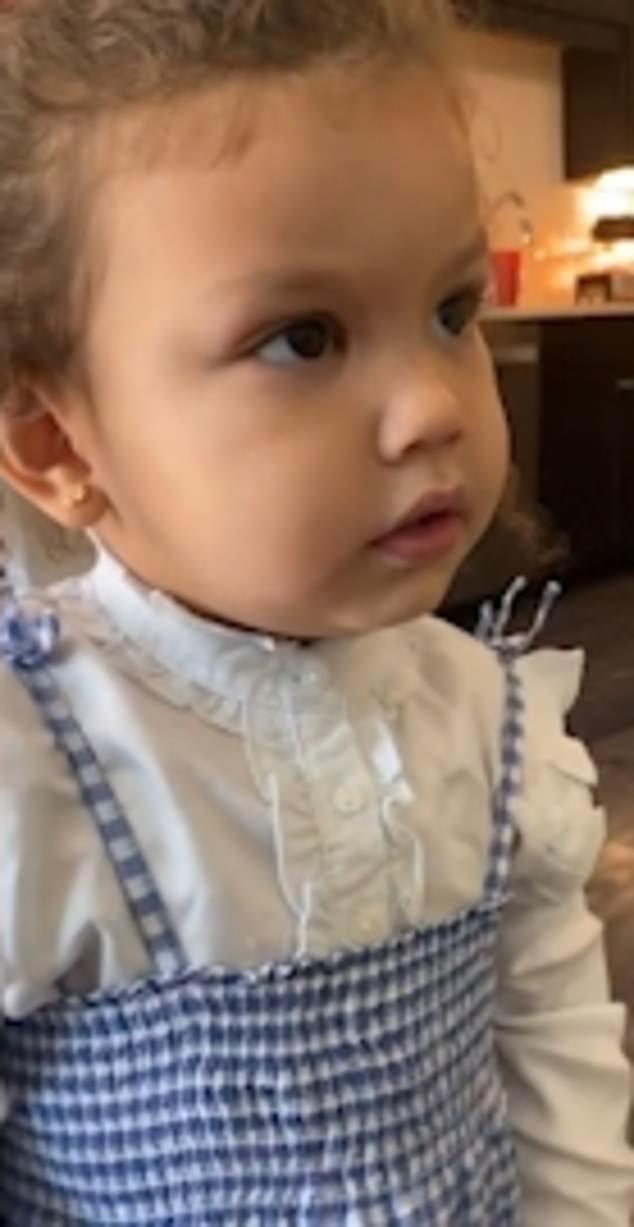 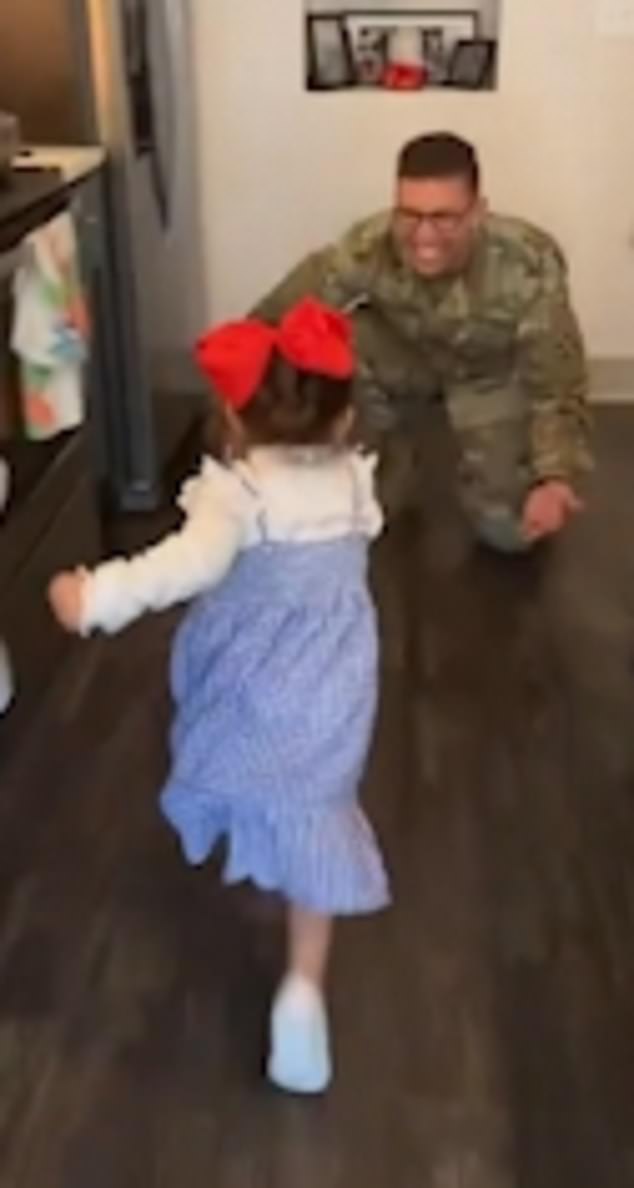 As Mr Nazario entered the room, Skye yelled out, ‘Papa!’, and ran to her father’s open arms, as she laughed with excitement 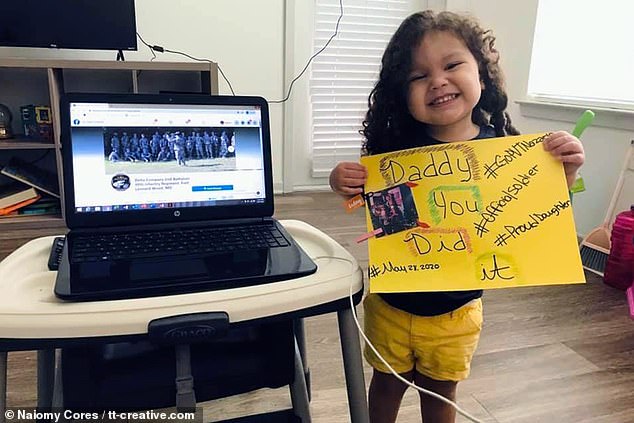 When Mr Nazario – a Private Second Class in the U.S. Army – was away from their home in Florida, Skye cried for her father at night and would always say how much she missed him

‘It was so overwhelming – in a good way – and also happy, because I was able to record that perfect moment so we can always have memories of what true love and a true bond looks like.

‘We are both in shock still with the reactions online and the video going viral, because we didn’t expect it to be seen by so many people around the world.

‘I am very, very thankful for the positive comments and good vibes sent our way because of the post.

‘I just hope that people see that, even during these times, we can still hold onto those we care about and love, because that’s what really matters.’