Treasurer Josh Frydenberg retreated to his happy place on Sunday, the Kooyong Lawn Tennis Club, to smile away the pain of a bruising weekend Liberal preselection by having a hit with retired tennis player Sam Groth.

“Hitting balls at Kooyong beats Cabinet meetings in Canberra any day! Good to catch up for a rematch with Aussie Davis Cup champ, @samgroth!” the Treasurer exuberantly posted to his 22,200 Instagram followers. 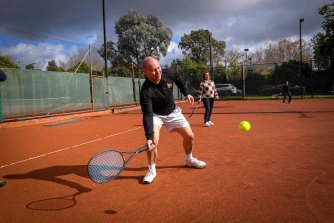 Alas Groth, who had already featured the Treasurer on his Instagram three weeks ago, did not return the favour by posting the rematch to his 52,100 Instagram followers.

On Saturday, the Treasurer failed to get his man Simon Frost up in a Senate preselection. After failing to save ancient MP Kevin Andrews in the seat of Menzies and get favoured candidate Andrew Asten up in the seat of Casey – that’s got to hurt.

Happier news was the confirmation of Sarah Henderson in the number-one spot on the Senate ticket.

But after more than 80 members who voted for Henderson did not vote for Frost, Greg Mirabella, the man who lost out to Henderson last time, took the number-three spot, which caused Frydenberg ally and party elder Michael Kroger to hastily exit the auditorium.

A quarter of registered delegates, despite all sorts of cajoling from the Frydenberg camp, simply failed to turn up, which hurt Frost’s chances.

The vacancy came about because departed Senate president Scott Ryan, who was going to serve the full term, suddenly didn’t, leading to speculation he must be getting a plum posting to get him out of the way. High Commissioner to Canada, perchance?

Mirabella, now number three on the coalition ticket, will make history if he follows his wife Sophie, the former Liberal MP for Indi, into Parliament. The preselected candidate thanked his wife in his acceptance speech, but she was absent from the meeting.

Sophie Mirabella painfully lost the rural seat of Indi to independent Cathy McGowan in 2013. Now some are determined to blame her for helping to spark the independent “Voices” movement in readiness for next year’s election are spreading the country and threatening a raft of inner city Liberal seats.

The only place to be on Monday night will be Stonnington Council for the vote on who will be mayor for the next 12 months. Naturally, this column will be at home watching the final of Celebrity MasterChef.

As this column has all too frequently detailed, the richest local government area in Victoria, which takes in South Yarra, Prahran and Malvern, is possibly the only place in the state more toxic than the state Liberal Party.

Rookie mayor Kate Hely’s 12-month term is up. She was installed to make a clean break with previous dramas, but Liberal councillor Alexander Lew has for months been calling for her to step down, criticising her inexperience.

Lew has more recently turned his attention to state politics and is hoping to knock off dumped Liberal leader Michael O’Brien for the seat of Malvern in a preselection.

But he has cemented his unpopularity with his fellow councillors.

As one observer put it. “The vote will be decided by the seven councillors who are not Alex Lew or Marcia Griffin.”

Former mayors Matthew Koce and Jami Klisaris are seen as the frontrunners to become mayor again.

Hopefully, the meeting will not see temperatures reach the heights of a council meeting in June when as a sports complex redevelopment was approved a local eco-warrior brandished a dead possum in front of startled councillors. Only in Stonnington folks, only in Stonnington. 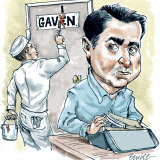 As ABC news director Gaven Morris’ final day in the top news job at the national broadcaster fast approaches, all chatter inside Ultimo and Southbank is focused on a long list of contenders regarded as potential successors.

But there are more immediate concerns. Including who will fill Morris’ chair in the intervening period between him skipping out of Ultimo for the final time and a no-expenses-spared recruitment process landing on a successor. A job ad is imminent, we hear.

As a result, ABC’s head of network and news gathering Gavin Fang is expected to be announced as the acting news director.

As this column revealed, Fang – who’s known inside ABC corridors as ‘G2’ to Morris’ ‘G1’ in a cute homage to the broadcaster’s signature Bananas in Pyjamas children’s program – is G1’s protege and a frontrunner for the big job.

But as is the way, there are strong views forming on the floor. Some in the newsroom are mad keen to see 7.30 executive producer Justin Stevens in the role. But he has been on family leave for the past three months but will return to 7.30 in the new year.

As we said, the formal process is yet to begin. Grant Sherlock who is head of ABC News Digital is understood to have also put his hand up for consideration. Others regard former investigations boss Jo Puccini as a strong contender even though others question whether she would gladly leave the newsroom for the management-heavy role. And then there’s Genevieve Hussey, the head of state coverage, whose diversity advantages include being female and Brisbane-based, as well as the well-regarded executive editor and head of investigations John Lyons, who memorably live-tweeted when the Australian Federal Police raided the Sydney office of the ABC two years ago. As always, another prospective candidate is former Sydney Morning Herald editor Judith Whelan, director of regional and local.

Last week we brought you details of a skirmish involving media union MEAA and its endorsement policy for the election of directors for the Copyright Agency, which led to disgruntled CA candidate Chris Pash standing for the post of MEAA national president of the media division against Karen Percy.

The MEAA’s main governing body, the federal council, has 21 positions also up for election. There are 24 candidates standing for the upcoming election and in a clear signal of the MEAA’s diversity, some of the nominees do not work for the ABC.

MEAA sources are worried about a low voter turnout for the postal ballot which runs over the peak of the silly season from December 8 to January 19. There’s even talk of getting some actors to film a humorous educational video to reintroduce the concept of snail mail to union members. All this because the Australian Electoral Commission and Registered Organisations Commission will not allow electronic voting.

And standing unopposed for vice president of the Victorian branch is our colleague Myriam Robin, who writes the Rear Window column for the decidedly pro-capitalist Australian Financial Review. Nobody tell Stutch.