Their ’embarrassing’ vaccine promotion video, which promotes getting the COVID-19 booster, had Twitter users insisting that ‘nobody’s laughing.’

Biden, 79, acts as a cameraman in his new gig with the superstar brothers, lip-syncing to a viral Sidetalk video – an Instagram show where the hosts interview New Yorkers – where Biden’s last name is incorrectly pronounced ‘Byron’ and the Jonas brothers ask what ‘dinner plans’ the president has.

This isn’t the first time the president has used the Gen-Z social media platform to push liberal policies and to encourage vaccinations.

Earlier in the day, he posted a video with acapella group Pentatonix, which received negative comments.

He’s also collaborated with Benito Skinner – a TikTok comedian who often makes fun of Gen-Z by posing as an ‘intern’ – and even brought Gen-Z singer Olivia Rodrigo to the White House earlier this year. 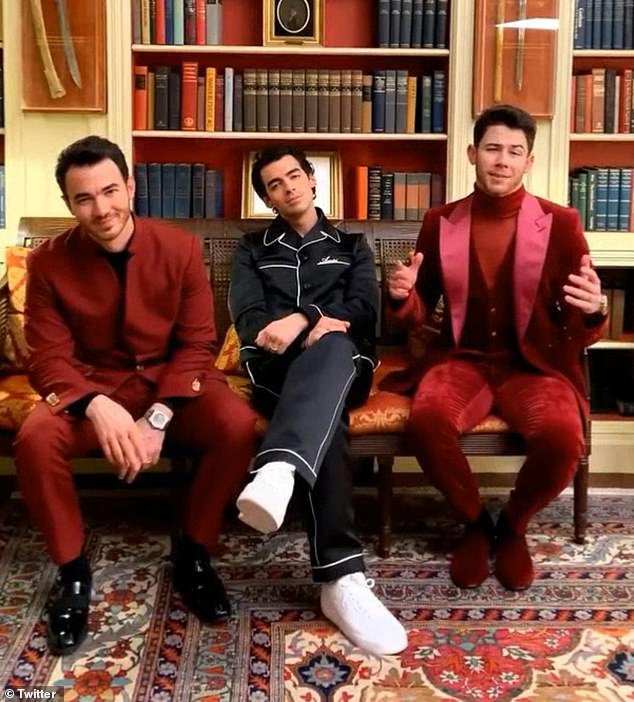 The Jonas Brothers (L-R: Kevin, Joe, and Nick) are the latest Gen-Z influencers to pair up with Joe Biden for a hilarious TikTok promoting vaccines.

Joe Biden, 79, acted as the trio’s cameraman and insisted they ‘got’ the shot. Despite the lip-synced audio mispronouncing Biden’s last name as ‘Byron,’ the president was a good sport 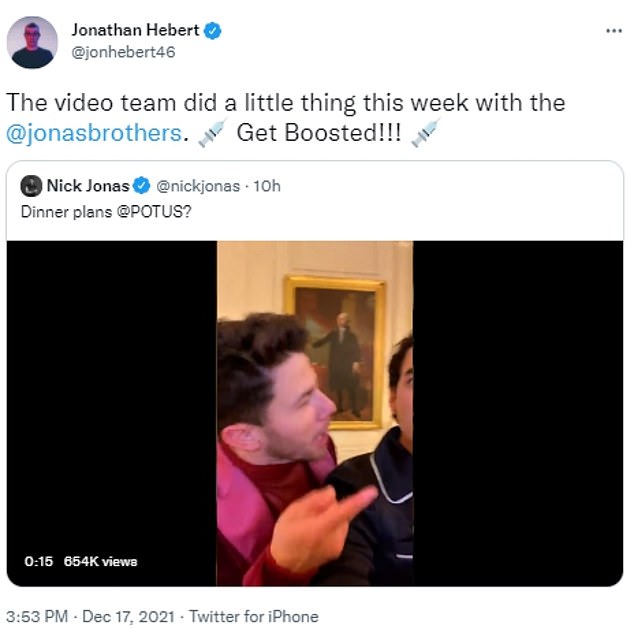 In his latest video, the Jonas Brothers – made up of brothers Joe, 32; Nick, 29, and Kevin, 34 – opened up the video asking each other if they were ‘vaccinated,’ which  all three brothers confirmed, before asking:

Joe and Kevin pop up behind his shoulders, confidently saying: ‘Byron… Byron.’

As the video continues, the boy band sits on a couch in festive suits and asked what they’d like to tell Biden.

Kevin, lip-syncing, replies: ‘What up, baby?’

Meanwhile, Nick says: ‘Take me out to dinner.’

Afterward, the group drops the act, with Kevin asking: ‘Did we get it?’

The camera pans behind and shows none other than the president himself holding a black-cased iPhone in front of his face, acting as their faithful cameraman.

He lowers the camera and says: ‘We got it.’

White House Video Director Jonathan Herbert proudly posted the video to his own Twitter page, writing: ‘The video team did a little thing this week with the @jonasbrothers. Get Boosted!!!’

Despite the playful moment, fans were critical of the ’embarrassing’ moment.

Despite the video being satire, many fans were critical of the collaboration and demanded the president do ‘actual work’ and insisted that ‘no one was laughing.’ Some fans, however, did enjoy ‘Grandpa President,’ while other just insistent he cancel student loan debt

Gian B wrote on Twitter: ‘God this is embarrassing.’

Dylan, who does not have his last name on Twitter, simply wrote: ‘Delete this.’

Others suggested the group ‘needed help’ and that ‘nobody’ was ‘laughing.’

However, the majority of the comment section was dedicated to asking Biden to erase student loans, as many loaner owners are preparing to start paying their debt back after months-long standstill. Students have to start paying back loan on January 31.

One wrote: ‘Bestie, tell that man to cancel my damn loans.’ 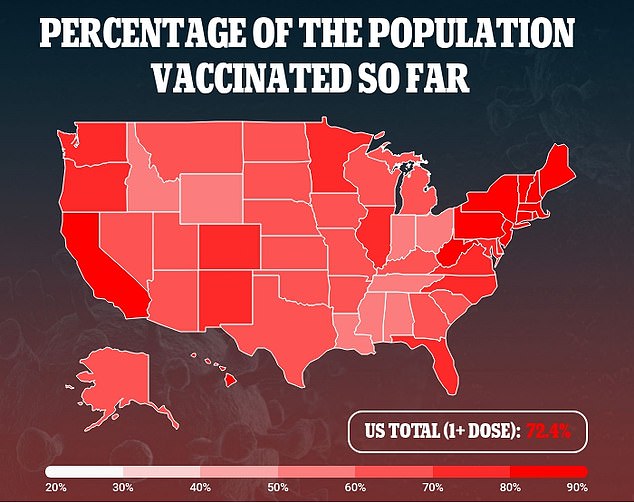 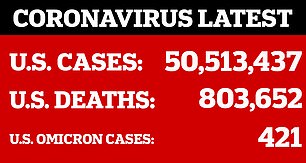 The US has experienced 50.5million COVID-19 cases and over 400 of those are from Omicron

But not everyone was against the collaboration, with one writing: So cute. I love Grandpa President. So normal. So adorable.’

More than 70 percent of the US is vaccinated with at least one dose and more people are getting boosters are it becomes available to them.

It is unknown how much Biden’s TikToks are influencing the vaccine increase, but nevertheless, he keeps pushing out more content.

Now experts are pushing for Americans to become fully vaccinated and to get boosted.

‘Clinical studies show that boosters reconstitute the antibodies titers and enhance the vaccine protection against Omicron,’ Fauci said on Wednesday.

In addition, the US currently has over 400 Omicron cases as the variant continues to spread through the majority of the states.