UK flights have DOUBLED since last summer to nearly 3,500-a-day

UK flights have DOUBLED since last summer to nearly 3,500-a-day… but still lag behind pre-Covid levels

The number of flights to and from the UK has more than doubled since last summer – but remain well below pre-Covid levels.

The seven-day average for last week was at 54% in the same week in 2019, the Office for National Statistics revealed.

Yet the daily average of around 3,500 is still around half of what was seen before the pandemic, new data showed today.

Yesterday saw 3,477 flights at UK airports, more than times the 753 seen on the first day of this year. 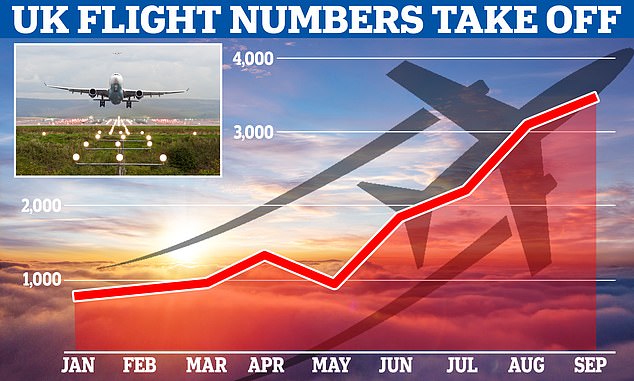 This graph shows the increase in the number of daily flights this year, with the first day of each month used to illustrate the trend

The travel industry has borne the brunt of pandemic disruption, with international travel grinding almost to a halt throughout much of the crisis.

Yet the sector received a major boost with the news earlier this month that the current traffic light system is being ripped up.

The double-jabbed will no longer have to take costly PCR tests when they return from abroad. Instead, they will need only a cheaper lateral flow test.

The ‘pre-departure tests’ that travellers are forced to take before flying home are also likely to be scrapped.

The new travel rules from October 4 at a glance…

There will also be changes to the controversial ‘traffic light’ rules – which will be cut to a two tier ‘go’ and ‘no go’ system.

The new rules will be in place from October 4.

Bookings surged by up to 700 per cent within an hour of the President’s announcement and airlines’ share prices rocketed.

In a further boost, Business minister Paul Scully has said the Government could scrap the need to take departure and arrival PCR tests when travelling abroad, from as early as the October half-term holiday.

Asked on Sky News whether PCR tests would be scrapped in time for half-term, the minister said: ‘That’s absolutely the aim.

‘We’ve got to get the systems in place because we want to move to lateral flow tests to make it easier and cheaper for people to be able to enjoy those holidays at half-term.

‘The aim is later on in October.

‘We know that half-term is looming, we know people want to get away, but we also want to encourage business travel as well, because that is investment in the UK, it is investment in jobs and creates opportunities for people.’ 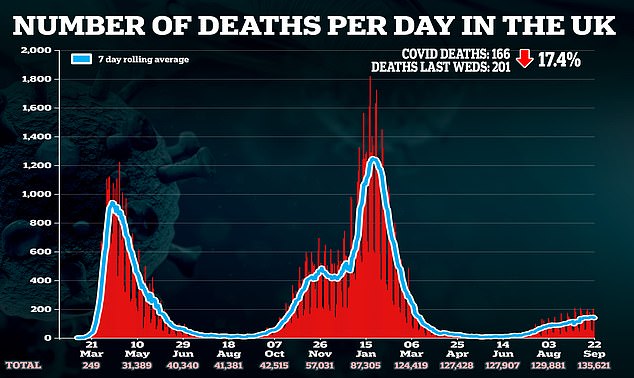 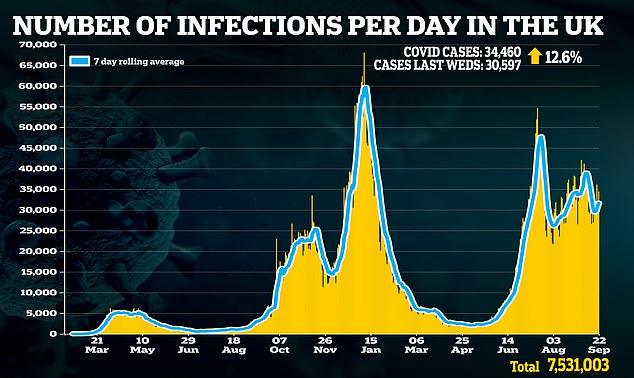 Department of Health data contradicts the ZOE study, showing that Covid cases rose week-on-week for the last five days. But it is picking up a surge among younger age groups, which matches the study

In another sign of the economy reopening, the number of suits being dry cleaned at Timpson is up 80% compared to the same month last year, CEO James Timpson told MailOnline.

Britain’s pubs are reporting a surge in sales as thirsty workers head back to the office – with some already outpacing pre-pandemic figures.

Profits have been recovering since the easing of lockdown restrictions in July, especially in city centres such as London and Manchester.

But a shortage of EU workers – exacerbated by Brexit and Covid – means many pubs are struggling to fill the job vacancies required to cope with the fresh demand. 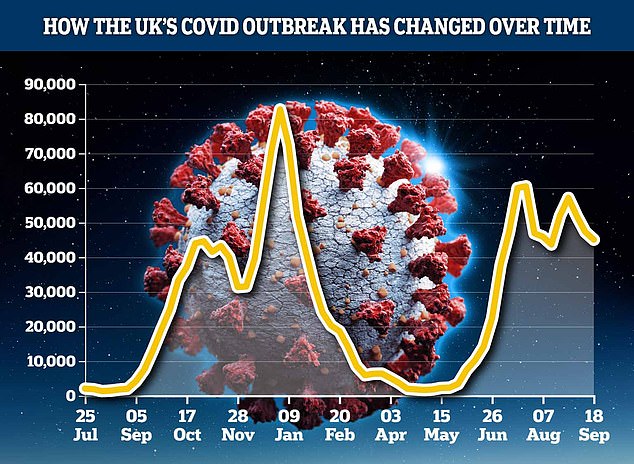 King’s College London scientists estimated 45,081 people caught the virus every day in the week to September 18, down from 47,276 in the previous seven-day spell

Pub group Fuller confirmed office workers were an important factor in its recovery, which has seen sales in the seven weeks to September 18 reach 86% of levels seen before the pandemic.

Boss Simon Emeny added: ‘We are now beginning to see a return of customers to our central London pubs, which is a great sign as we head into a busy trading period.’

Meanwhile City Pub Group revealed sales are at 90% of 2019 levels since indoor service was resumed in May, while Mitchells and Butlers said sales in the last eight weeks have now overtaken pre-pandemic levels on a like-for-like basis.