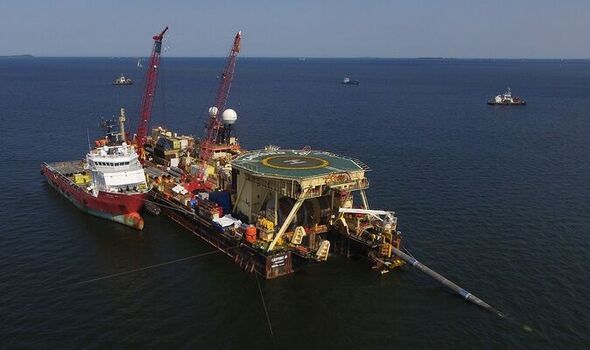 The virtual gathering follows four ruptures last week in the Nord Stream 1 and 2 undersea gas-carrying pipelines running from Russia to Germany under the Baltic Sea. Those blasts occurred as Russian President Vladimir Putin was preparing to announce the annexation of four Ukrainian provinces – a move widely denounced in the West as a violation of international law and a serious escalation of the conflict.

The Sunday Express has learned that a Nato briefing suggested the 1,200km Russian pipelines could have been constructed with back-door booby traps allowing Moscow to sever them in times of war, though this is just one of many working hypotheses.

While Russia denies responsibility, the event has raised concerns about the safety of other crucial infrastructures such as offshore pipelines, undersea communication cables and wind resources, which are generally considered to be vulnerable.

PM Liz Truss on Friday echoed Nato sentiments that they were “”clearly an act of sabotage”, and last week agreed to assist both Denmark and Norway in shoring up their defences.

Royal Marines from a specialist counter drone commando unit have already been put on standby to join Norwegian forces who have already deployed to oil and gas platforms across the North Sea in readiness to deter any air infringements.

Both countries are members of the UK-led JEF, a naval high reaction group which also includes Finland, Estonia, Iceland, Latvia, Lithuania, the Netherlands, and Sweden.

Many of Nato’s maritime assets are already planned to be in the North Sea this week for the start of their annual Joint Warrior Exercise, which will see 40 vessels from Britain, the US, Poland, Denmark, Norway, Germany, Netherlands, Canada, France and Latvia congregate off the West Coast of Scotland.

Because of its geography, the UK is a transatlantic “hub” around which the hundreds of fibre-optic cables pass along the sea bed to Europe.

These cables transmit 98 percent of global communications and £7 trillion in daily financial transactions and include the 4,500-mile Havfrue/AEC-2, owned jointly by Google and Facebook, which spans between New Jersey to Ireland, Denmark and Norway as well as Google’s 4,000-mile Grace Hopper, which will stretch between New York to Cornwall and then Bilbao in Spain when it is operational.

In June Admiral Sir Tony Radakin, head of Britain’s armed forces, warned about the “phenomenal increase in Russian submarine and underwater activity in the past 20 years”

Of particular concern is Russia’s development of the K-329 Belgorod submarine, a 182m behemoth which acts as a mother ship for deep diving nuclear-powered midget submarines capable of sabotaging undersea internet cables in relatively shallow waters of the North Sea.

Last year the UK announced a new Multi-Role Ocean Surveillance Ship (MROSS) to offer “360-degree protection” to safeguard not only Britain’s national infrastructure. but also major EU economies as a sign of the UK’s continued commitment to European defence.

However, that vessel, which will be based on an existing North Sea patrol boat, won’t be ready until 2024.

However extra measures to safeguard the UK’s assets are already being prepared.

These include more deployments of hi-tech capabilities by the RAF and Royal Navy to monitor the seabed and search the ocean for signs of hostile activities.

The effort is being led by RAF Poseidon P8 surveillance planes, based at RAF Lossiemouth, which are capable of dropping acoustic sensors to map activity on the sea bed, as well as autonomous Royal Navy subsea drones to search for mines and scan seabed pipelines.

The Royal Navy will deploy a survey vessel, based at Faslane which carries the fleet’s autonomous mine hunting force, to scour the sea bed for threats.

Under Operation Wilton, the autonomous naval system is based around sub-sea drones which can search hundreds of miles in a day, delivering high-resolution footage for naval operators to scan and interpret.

Astute-class hunter-killer submarines have also been placed on high alert. Though they cannot operate in the shadows of the North Sea, they will linger in the northern extremes to prevent any Russian submarines from nearing the nexus of strategic communication cables, as well as oil and gas pipe flows to Shetland.

A senior Royal Navy source confirmed: “A virtual meeting between the JEF will take place tomorrow to discuss how best to pool our maritime resources in order to safeguard vital infrastructure.”

The meeting is revealed as Russia is today being forced to accept the loss of Lyman, a stronghold in eastern Ukraine’s occupied Donetsk region which has served for months as a logistics and transport hub anchoring Russian operations.

Acknowledging the ” threat of encirclement” by Ukrainian forces, a Russian defence ministry spokesman said its forces were withdrawn “to more advantageous lines,”

It represents the biggest gain for Ukrainian forces since Kyiv launched its counter-offensive last month, and comes a day after Putin proclaimed Donetsk, as one of the four regions officially annexed by Russia.