Victoria has recorded 510 new local coronavirus cases and one death on Friday as the state’s list of high-risk exposure sites expanded overnight to include a plethora of new venues in the state’s regions.

Of the new cases recorded in the 24 hours to midnight on Thursday, 124 have been linked to known clusters, meaning more than 380 remain a mystery, according to the Department of Health. 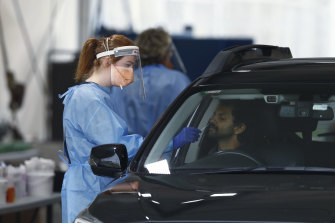 One person with COVID-19 has died.

Of the 510 local cases, 124 have so far been linked to known cases and outbreaks.

More than 43,993 vaccine doses were administered in Victoria on Thursday, pushing the state past the first dose vaccination target of 70.25 per cent, according to Prime Minister Scott Morrison.

There was also a new case recorded in hotel quarantine, with a total of 4,697 active cases in Victoria.

The figures come as more than 20 exposure sites were listed across the regions overnight and as Victorians prepare to enjoy more freedoms after it was announced that social outing rules would be loosened.

From Saturday, up to five fully vaccinated adults or two non-vaccinated people, from two different households, will be able to meet outdoors after the state was due to reach the 70 per cent first-dose vaccination target overnight on Thursday.

Premier Daniel Andrews acknowledged the practical limitations on policing people by vaccination status, and said he was relying on Victorians doing the right thing.

“We can’t literally have a situation where we are going park by park, picnic by picnic,” Mr Andrews said on Thursday.

“There’s a degree of good faith in this … if people do the right thing, then we’ll be out of lockdown sooner.”

As well as limited outdoor gatherings such as picnics, the changes from 11.59pm Friday also include the widening of the five-kilometre movement limit to 10 kilometres, the reopening of outdoor gyms and skate parks and Melburnians will be able to exercise for four hours per day, up from two.

While gyms and pools can reopen with density limits in regional Victoria, Ballarat, which began a week-long lockdown on Thursday, shares the same restrictions as Melbourne.

Six cases have been recorded in the regional city so far. The cases were sparked, health authorities said, by an authorised worker who travelled from Melbourne for work in Ballarat.

Most of the exposure sites listed for regional Victoria overnight were in Ballarat, and include shopping centres, supermarkets, a Bunnings warehouse and the Myer store in the centre of the city.

A medical clinic on the Bellarine Peninsula has also been classified a tier one site after two cases in Greater Geelong were newly diagnosed on Thursday.

The health department are asking anyone who was in the Curlewis Medical Centre on September 9 from 11am to 12.10pm to get tested and immediately isolate for 14 days.

While the NSW border city of Albury went into lockdown on Thursday night, sister city Wodonga has not yet suffered the same fate, though a new exposure site was listed overnight on the Victorian side.

In other announcements on Thursday, the construction industry will be subject to mandatory vaccinations from September 23.

All construction workers in Victoria will be required to show evidence to their employer that they have had at least one dose of a vaccine before Friday next week, though limited medical exemptions and proof-of-booking exceptions will apply. Construction workers will be given priority vaccination appointments, the health department said.