‘We need food and water’: Philippine typhoon’s trail of despair extends to Malaysia

Singapore: When typhoon Rai tore through the Philippines at nearly 200 kilometres an hour late last week, Jamaica Guanzon and her young family were gripped by fear.

Now, while the fierce winds have died down, they have been left to process the devastation of the poor area of Kabankalan City where they live.

Jamaica Guanzon and her family, whose house in Kabankalan City was destroyed by typhoon Rai.

“My house is destroyed. We don’t have electricity now, we don’t have a water supply. We need food, we need water,” she told The Sydney Morning Herald and The Age on Monday.

“Right now are living in [a] small house we built [on Sunday] made of nipa and bamboo.”

The city, in Negros Occidental province in the Western Visayas region of the Philippines, is just one area flattened by the super typhoon which tore through the central and southern parts of the archipelago on Friday. 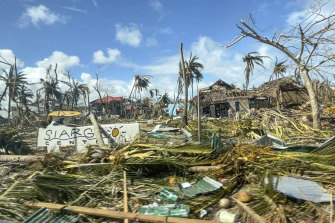 Surigao del Norte, on the north-east corner of Mindanao, has been one of the hardest hit by the typhoon.Credit:AP

More than 300,000 people were forced to flee their homes as Rai, called Odette locally, approached landfall late last week. The death toll rose to at least 208 on Monday, the national police said.

Across the Visayas island group and on Mindanao, the Philippines’ second-largest island, houses and other buildings have been levelled, the power and telephone supply cut off and residents have been trapped, with military, police and coast guard deployed in an ongoing search and rescue mission. 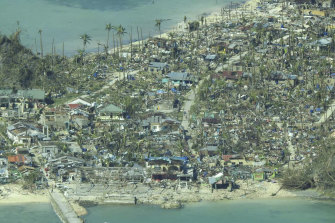 It is a cruel pre-Christmas blow in the mostly Roman Catholic country and while outgoing Philippine President Rodrigo Duterte has pledged 2 billion pesos ($56 million) to the recovery process, Guanzon barely knows where to start.

“Most of my friends here in my community, their houses are also destroyed and some of them are living in evacuation centres,” said the mother of three, whose family took shelter from the typhoon at her parents’ house.

“One of my relatives [is missing]. We don’t know whether she’s alive or not.

“We are praying and asking for help in building our houses again.”

While at least 34 people are reported to have died in Negros Occidental province, there have been another 74 fatalities in Bohol to the east, the province’s governor Arthur Yap said on his Facebook page.

The natural disaster has revived memories of super typhoon Haiyan, the worst storm on record in the Philippines, which left more than 6300 people dead and displaced more than 4 million in 2013. 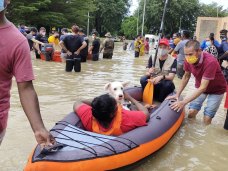 Malaysian MP Ong Kian Ming (with paddle) and other volunteers help with the rescue effort amid flooding in Selangor state.Credit:Facebook

“There are some areas that look like it has been bombed worse than World War Two.“

There has also been a major rescue effort taking place in Malaysia, with 21,000 evacuated over the weekend after major flooding in its central region.

Volunteers in boats and canoes have helped emergency services personnel ferry those stranded in cars, houses and hospitals to safety in Selangor, Malaysia’s most populous state.

“I was with a guy who bought six canoes from [sports store] Decathlon to help get people out,” said Farhan Iqbal, who was among the community responders shuttling people out of flooded buildings in the Selangor state capital of Shah Alam on Sunday night.

“We were clearing out hospitals in waist-deep water. There were actually mothers with their three-day-old children in canoes heading out.”

Ong Kian Ming, an MP in Selangor, said he had managed to make about 15 trips into the heavily flooded Taman Sri-Muda district in Shah Alam in his kayak, rescuing about 40 people over four hours.

“Road signs, streetlamps, fences, gates of the houses were all under water,” he said. “To make matters worse, Taman Sri Muda is a very big [township]. Slightly less than 3 kilometres from north to south and about the same distance from east to west. [There are] more than 10,000 residents and we had no idea how many of them needed rescue.”

By Monday there was one reported death from the floods, a man who drowned in Shah Alam.

The downpour across the central states of peninsular Malaysia on Saturday exceeded the average rainfall for a month, according to a government spokesman.