Athas Zafiris was tucked up in bed and preparing to go back to work on Tuesday morning when he received a WhatsApp message telling him he would have to isolate for another seven days.

Late at night, his friend had noticed a change to information on the Victorian Health Department’s website, and got in touch. 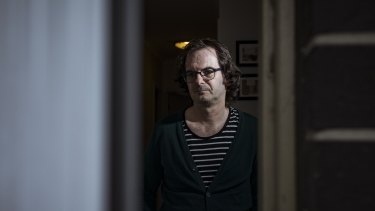 Athas Zafiris is isolating at home, but only because his friend alerted him to new advice posted late at night.Credit:Chris Hopkins

People who had visited the Bodriggy Brewing Company in Abbotsford between 2.50pm and 5.30pm on December 28 were now advised to get tested and remain in isolation for 14 days of the potential exposure.

Mr Zafiris had previously read that he would be safe to leave home isolation after returning a negative test, as he had on Monday.

“My mate took a screen shot of the new update,” he said.

“But what if my friend didn’t contact me? I would have gone to work and not followed the advice.”

Victoria’s public health team has been praised for making significant improvements to the state’s contact tracing system since huge delays during the second wave of COVID-19 – but some issues are still being reported.

Mr Weimar said he expected “everyday Victorians” to be checking the DHHS website “at least once or twice a day”.

The public has not been advised when major changes have been made to correct mistakes in information about possible exposure sites, or alerted to changed advice.

Meanwhile, some managers of venues listed as exposure sites and their patrons say they haven’t been contacted by the Department of Health and Human Services, hearing the news first from friends or in the media.

Victoria’s COVID-19 response commander, Jeroen Weimar, revealed on Tuesday that information about some of the exposure sites had been changed “six times over” as more information had come to light since the Black Rock cluster was first identified last Wednesday.

Mr Weimar said he expected “everyday Victorians” to be checking the DHHS website “at least once or twice a day”.

He said all primary close contacts of positives cases were being contacted within 24 hours, though sometimes the news spread ahead of contact tracers – a trend he wanted to encourage.

“The bush telegraph has worked very effectively. People are already getting the news out,” he said.

Following public feedback, Mr Weimar also said a box had been created at the top of the exposure site page to better flag recent changes.

Mr Zafiris, a logistics worker in Melbourne’s northern suburbs, said the first time he was aware he may have come into contact with someone with coronavirus was on Sunday, when a friend noticed the brewery had become an exposure site during the time they visited, requiring 14 days' isolation.

Later, he said the advice was changed to say that they didn’t need to isolate if they got a negative coronavirus test, before being changed again on Monday.

Mr Zafiris said he gave his contact details via a QR-code system when he visited the brewery with about 10 friends and their children on December 28, but as of Tuesday afternoon none of them had been contacted by the DHHS.

He said he was concerned elderly people or migrants might miss notifications and changes to the government website.

“They have your contact details, they have your phone number, so that’s why I was a bit frustrated,” he said.

The Black Rock cluster has been centred on a spreading event at the Smile Buffalo Thai restaurant on the night of December 21, which has so far accounted for 12 of the 27 cases. There are yet to be any other cases linked to other public exposure sites, with people instead catching the virus from close contacts in private homes, and one via a work connection.

But La Trobe University epidemiologist Associate Professor Hassan Vally said the danger of communication failures was that people with coronavirus would be missed and be moving around the community without knowing they were infected.

“As I heard another epidemiologist say, no one every gets to the end of a pandemic and says that we communicated too much,” he said.

“You’ve got to take on feedback and keep on adjusting your strategy.”

Get our Coronavirus Update newsletter

Stay across the news you need to know related to the pandemic. Sent Monday and Thursday. Sign up here.