Home » World News » With Gladiator on board Thailand readies to reopen, but is it too soon?

Singapore: In August, Nicole Kidman sparked public outrage in COVID-zero Hong Kong by gaining an exemption from quarantine to shoot a television show there.

Two months later, another Academy award-winning Australian actor is receiving a vastly different reception to filming in Thailand as it prepares to take a bold step towards living with the virus. 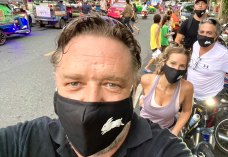 Russell Crowe is in Bangkok filming.Credit:Twitter

Russell Crowe was able to skip hotel-room quarantine as well but via the so-called Phuket sandbox, a scheme allowing fully vaccinated overseas arrivals to roam the holiday island before being permitted to travel to the rest of Thailand after 14 days.

His glowing reports on social media and presence now in Bangkok have delivered a “soft power gift” to the kingdom, the Bangkok Post declared in its editorial on Monday.

However, as Thailand races towards welcoming back international arrivals without quarantine from November 1, the question is whether it is joining the reopening race in south-east Asia too early?

Singapore, with 84 per cent of its population fully vaccinated, has resumed quarantine-free travel for the inoculated from a range of countries that is expected to soon include Australia.

Malaysia, with a double dose figure of 70 per cent, is getting ready to relax its border restrictions when it hits 90 per cent in December and vaccinated travellers will from next month be able to fly to its tourist hotspot Langkawi without having to isolate.

Thailand, though, trails those two significantly on vaccination, with only 36 per cent of its 70 million population having had two shots and just 53 per cent having had one. It is also recording the highest daily infection numbers in the region, with 10,111 new cases on Monday as well as 63 deaths.

The reopening will be initially restricted to 15 provinces and only include arrivals from “low risk” nations – the United Kingdom, United States, Germany, China and Singapore have been named so far – but the survey highlighted concerns about infections soaring, tourists bringing in the virus or a new variant and about the country being forced back into lockdown.

Public health experts have also queried whether authorities are ready to handle the testing requirements for a mass reopening.

Customers at gin bar Teens of Thailand in Bangkok’s Chinatown on the weekend. Bars and restaurants reopened last month after a lockdown.Credit:Getty Images

“If you see the WHO and others’ recommendations, they are saying if we are looking at the herd immunity the country must be at least 60 per cent fully vaccinated so we’re in a much safer environment,” he said.

“Several countries like Thailand are trying to see how they can really [reopen] sooner rather than later … what they are currently, is not the optimal level that is recommended to ease up the restrictions.“

However, he said he had confidence in Thailand’s “very strong health system” and the plans being implemented to try and keep the virus in check and respond to any surge. 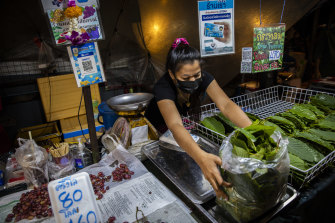 “From what I understand…they are also planning to have very strong or concrete public health measures to be in place so that the community transmission is still controlled,” he said.

Tourism-reliant Thailand, does not have a choice, according to its government.

The country had 40 million visitors in the last full year in 2019 and prior to the pandemic tourism accounted for 12 per cent of its GDP.

The number of foreign arrivals fell to 6.7 million in 2020, most before the virus took off, delivering a crushing blow to the economy and the millions who worked in the tourism sector.

As economist Chartchai Parasuk has pointed out, the risk of a rapid escalation in cases may well come not from international tourists importing the virus but from the local staff mobilising to look after them. But it’s one he argues has to be taken for economic survival.

Tourism and Sports Minister Phiphat Ratchakitprakarn has said the same.

“There is a competition to draw tourists in. So if we still impose a COVID-19 quarantine on them, such as for seven days, we won’t be able to compete well with other countries,” he said in the wake of Prayut’s announcement.

It is a different tone to what is being struck by Indonesia on Bali, where fully vaccinated foreign tourists from 19 countries are now allowed back but only after spending five days confined to a hotel.

“We have priority that the safety and health of Indonesians must be put on top of all things.
“We would remind everybody that we are still in the middle of the pandemic.“