When Heather Cunsolo, an architect and mother of three, sees someone in her area asking for help, she jumps in.

“It’s [from] a sense of community service; especially on social media if I see a post saying, ‘Can you help me with this?’ I’m very drawn to helping people and connecting them with information,” says Cr Cunsolo, a City of Port Phillip councillor who started in public life by supporting people via a community Facebook page. The same drive brought her to local government.

An analysis of the 2020 Victorian council elections by La Trobe and Melbourne University researchers has found voters want women and recognise their “overwhelming motivation to make their community a better place”. Only 40 per cent of 2020 candidates were women but almost 44 per cent of elected councillors were women, a Victorian record. 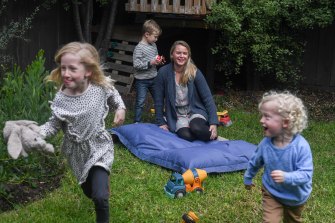 Cr Heather Cunsolo says many aspects of council life make it difficult for mothers to stand for office.Credit:Joe Armao

But because women with children aged under 18 carry far more of the housework and childcare duties than male counterparts, even if working full-time, mothers aged under 40 are put off by “role strain” and are largely missing on councils. The research found the mean age for councillors is 51.

“Women are more electable but we can see from the data they’re bearing the brunt of the pressure on the home front; women councillors are doing double the amount of housework and three times the amount of childcare of [fathers who are councillors],” said Associate Professor Andrea Carson, of La Trobe, who partnered with Melbourne University Policy Lab’s Leah Ruppaner and Gosia Mikolajczak.

“We find women more than men experience role strain and this ‘motherhood’ penalty leads to a missing cohort in public office.”

Surveys with women who were interested in running for council, but who eventually did not, found trepidation about role strain was the deal-breaker.

Mothers faced barriers including being hesitant to claim allowable childcare for fear of being pilloried when expenses were published (which has happened in some electorates) and the need to take a financial hit by dropping to part-time work to fit in council work, a factor not found to affect male councillors. These were causing mothers not to run or to drop out after one term.

“Until this is properly addressed, the gender gap in politics will continue to exist, which is bad for representative democracy,” said Dr Carson.

Deborah Wu, women’s policy and engagement officer at the Victorian Local Governance Association, said authentic community connection made women popular among voters but several obstacles remained if the state government’s aim of a 50/50 gender split was to be achieved by 2025.

The research found women were more likely to list altruistic reasons as their main motivation while for male candidates it was “to develop their own leadership skills, improve their CV or the status of being a councillor”, according to Dr Carson.

Dr Wu said more women needed to be visible in councils and they needed to be supported to feel as confident as men to run. “So many women are leading in informal ways that is good preparation; being on school councils or volunteer boards … but we see the classic CV key selection criteria conundrum,” she said.

Sarah Race, deputy mayor of the Mornington Peninsula Shire and a mother of children aged nine and 10, said having a full-time working partner who shared the domestic load enabled her to spend dozens of hours a week on council work. “It is all-encompassing,” she said.

“There is role strain, it is really hard, you couldn’t do it if you didn’t have a supportive partner. It would break you.”

Although Cr Race needs to use some paid childcare to cover council work, she does not claim it due to concerns about being criticised when councillor expenses are published.

Cr Cunsolo says the conflict between full-time work, parenting and council life that involves non-stop emails, large amounts of reading and contact hours is difficult for mothers of young children and, as well as making claiming for childcare less arduous (she uses it but has not claimed the money back), the introduction of fixed, daytime hours would help.

Despite her commitment to “giving back” to a community she loves, the strain of the juggle, with children aged three, six and eight, is such Cr Cunsolo is not sure she will manage a second term.

“Right now, it’s so hard it’s probably not worth it to run again. I don’t know how I’ll feel as the kids are getting older – I have heard from others that you don’t get enough done in that first term.”