Feminists claim victory over trans lobby as 2021 census chiefs agree to change official guidance on ‘What is your sex?’ question that allowed people to pick their own gender

Women’s rights groups have claimed a victory over the trans lobby after 2021 census chiefs agreed to change official guidance on the ‘What is your sex?’ question.

The Office for National Statistics guidance previously read: ‘If you are considering how to answer, use the sex recorded on one of your legal documents such as a birth certificate, gender recognition certificate, or passport.’

Campaign group Fair Play for Women launched legal action against the Office for National Statistics arguing what they were doing was ‘unlawful’ and describing it as ‘sex self-identification through the back door’ because citizens are able to self-identify their gender on passports.

And following a hearing last week, Mr Justice Swift ruled the online guidance – which is not in the paper versions of the census – should be altered to make it clear the question can only be answered by reference to a birth certificate or gender recognition certificate.

The judge also gave the campaign group permission for a full judicial review of its claim, which was due to be heard on Thursday ahead of the official census date on March 21. 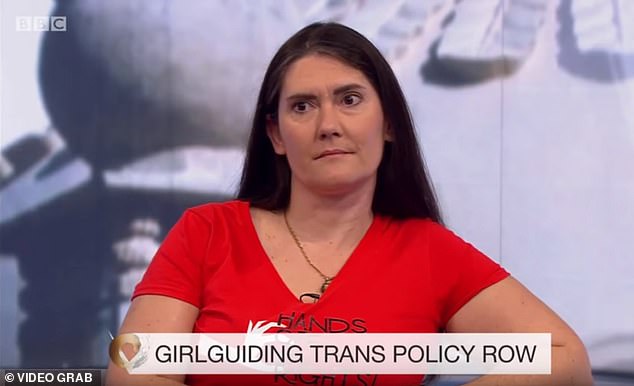 Campaign group Fair Play for Women (pictured: Dr Nicola Williams) launched legal action against the Office for National Statistics arguing what they were doing was ‘unlawful’ and describing it as ‘sex self-identification through the back door’ because citizens are able to self-identify their gender on passports

But the ONS has now agreed to a declaration that the revised guidance will remain in place and Fair Play For Women agreed to withdraw its case, meaning a hearing is no longer necessary.

Dr Nicola Williams, director of Fair Play For Women, said in a statement: ‘Being male or female is a biological reality that affects all our lives.

‘That’s why it’s important to collect accurate data on sex in the Census.

‘Sex data gets corrupted if the ONS conflates sex with the idea of a feeling, called gender identity, under the question ”What is your sex?”.

‘It is also wholly unnecessary because a new question has been added to this census specifically about gender identity.

‘We welcome this separate question on gender identity. We simply want accurate data on sex to be collected too.

‘ONS plans would have seen gender identity recorded twice and sex getting muddled.’ 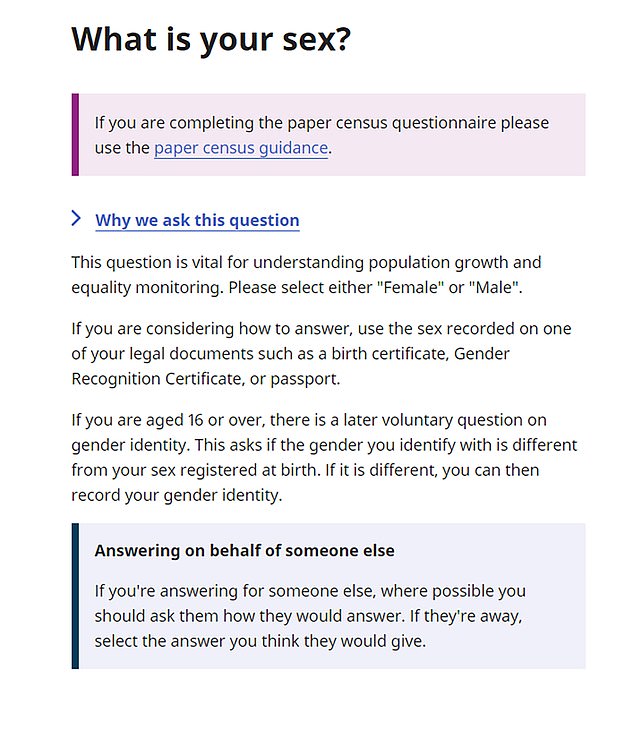 The Office for National Statistics guidance previously read: ‘If you are considering how to answer, use the sex recorded on one of your legal documents such as a birth certificate, gender recognition certificate, or passport’

She added: ‘The public needs to trust that our National Statistician will always prioritise good data over political correctness.

‘Wider questions must now be asked about how this was allowed to happen. This is not a problem confined to the ONS.

‘The idea that sex isn’t just a matter of being born female or male, and that we all have a gender identity, has become embedded within organisations.

‘As a result, sex is being overridden by gender identity in a whole range of public policies without proper scrutiny. It’s women and girls who pay the price.’

Dr Williams said that £100,000 which was crowdfunded to bring the challenge against the ONS will be used ‘to protect our sex-based rights in other areas, including paying for legal advice and action where necessary’.

He told the court that a person’s sex on a passport, or other legal document such as a driving licence, can be altered without a formal legal process.

The barrister argued this could potentially have the effect of ‘distorting’ the data the ONS gathers through the census.

Lawyers for the ONS argued that, in the context of the ‘What is your sex?’ question, sex is an ‘umbrella term’ which could refer to a person’s sex as recorded in any document provided by the state.

But, granting Fair Play For Women’s application, Mr Justice Swift said he was satisfied the campaign group had a ‘strongly arguable case’ on the issue.

The judge said there was a ‘mismatch’ between the way the guidance was phrased and the legislation which sets out how the Census must be conducted.

He also said he was satisfied the campaign group was ‘more likely than not to succeed’ on its case regarding the legal meaning of sex as defined in the legislation.

In a statement posted on its website in February, the ONS said: ‘We are continuing to ask a binary choice male or female sex question on the census.

‘This approach is unchanged since 1801.

‘There is a new voluntary question on gender identity for people aged 16 years and over later in the questionnaire.

‘We have worked closely with organisations and individuals from a wide range of representative groups over five years to ensure the Census questions we ask provide the best information possible.

‘As with previous censuses, most people will not need help to answer the sex question, but for those that do, guidance will suggest they use sex as recorded on legal documents such as a birth certificate, gender recognition certificate or passport.

‘This is not self-identification, which was evaluated as part of a range of options but not taken forward.’

Dr Williams said the High Court’s declaration has implications for the planned guidance to accompany the Scottish census in 2022 and that Fair Play for Women will be writing to the Scottish Government and the National Records of Scotland.