Yakuza boss is first ever to be sentenced to death in Japan: Senior crime clan member tells judge ‘You will regret this for the rest of your life’

A yakuza boss has been sentenced to death in Japan in what is believed to be a first after his criminal organisation murdered and attacked other citizens.

Satoru Nomura, 74, told the judge Fukuoka District Court, in western Japan, on Tuesday: ‘I asked for a fair decision… You will regret this for the rest of your life,’ Nishinippon Shimbun newspaper reported.

It is believed to be the first time a senior yakuza member has been sentenced to death, the BBC reported.

Nomura, the head of the ‘Kudo-kai’ crime syndicate in southwest Japan, denied accusations he had masterminded the violent assaults. Kudo-kai is often described as Japan’s ‘most violent’ yakuza gang.

According to Japanese broadcaster NHK, there was no direct evidence that Nomura had ordered the attacks.

However, in handing down the sentence, the judge said that the gang operated under such strict rules that it was unthinkable that attacks could have been carried out without its leader’s authorisation.

The trial revolved around attacks carried out by Kudo-kai members between 1998 and 2014. During that time, a former head of a fishing cooperative was shot and killed, and three others – including a nurse and former police officer – were injured by shooting or stabbing. 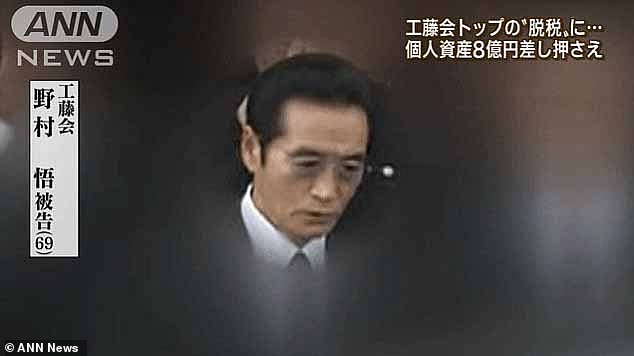 Satoru Nomura, 74, (pictured) is the head of the Kudo-kai crime syndicate, often described as Japan’s ‘most violent’ yakuza gang

Defence lawyers for Nomura plan to appeal the ruling, according to Kyodo news agency. Nomura’s number two, Fumio Tanoue, was jailed for life on Tuesday, the court said.

The yakuza mafia were long tolerated in Japan as a necessary evil for ensuring order on the streets and getting things done quickly, however dubious the means.

Nomura was found guilty of ordering the fatal 1998 shooting of an ex-boss of a fisheries cooperative who exerted influence over port construction projects, major media outlets said.

He was also behind a 2014 attack on a relative of the murder victim, and a 2013 knife attack against a nurse at a clinic where Nomura was seeking treatment, the court reportedly said.

The 2012 shooting of a former police official who had investigated the Kudo-kai was also deemed Nomura’s responsibility. The official survived with serious injuries to his waist and legs, media said.

The yakuza grew from the chaos of post-war Japan into multi-billion-dollar criminal organisations, involved in everything from drugs and prostitution to protection rackets and white-collar crime.

Unlike the Italian Mafia or Chinese triads, yakuza have long occupied a grey area in Japanese society – they are not illegal, and each group has its own headquarters in full view of police.

With more than 100 inmates on death row, Japan is one of few developed nations to retain the death penalty.