REVEALED: Angelina Jolie pays secret visit to orphans in Ukraine during whistle-stop tour of warzone as actress declares: ‘The impact on the children is devastating to see’

Angelina Jolie made a secret visit to an orphanage in Ukraine as part of a whistle-stop trip to the war-torn nation.

The Hollywood star, 46, kept her journey under wraps, with members of her entourage reportedly signing deals banning them from revealing any details.

Local officials had no knowledge of her visit to the orphanage at an undisclosed location around 90 minutes’ drive from the western city of Lviv. 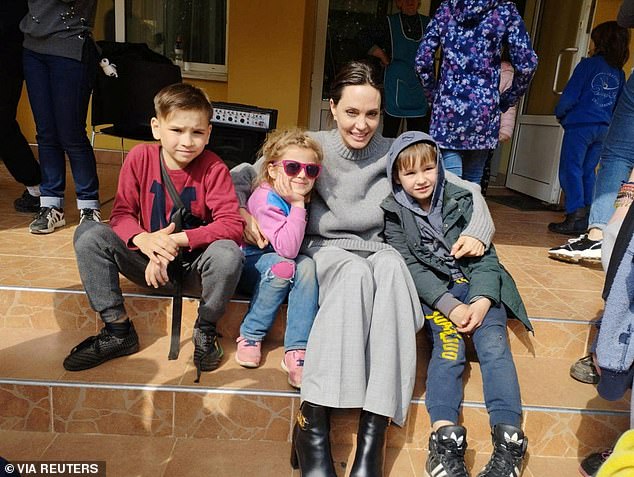 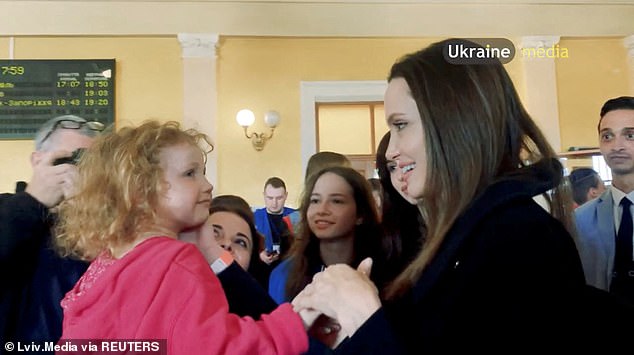 The US actor and UNHCR Special Envoy, pictured here interacting with a child at Lviv railway station, made the visit in a ‘private capacity’

The mother of six is a UN envoy for refugees but officials there insisted her visit was made in ‘a private capacity’.

The star of Tomb Raider also visited children at a hospital and later spoke to refugees at the train station, which 1.5 million Ukrainians have travelled through fleeing to safety.

When an air raid alert sounded, Miss Jolie seemed unfazed before being ushered away.

Asked if she was afraid, she replied: ‘No, I don’t care.’

Last night in a statement, the actress said: ‘I’m humbled to witness the resilience and courage and dignity of the Ukrainian people. The impact the war is having on a generation of Ukrainian children is devastating to see.’ 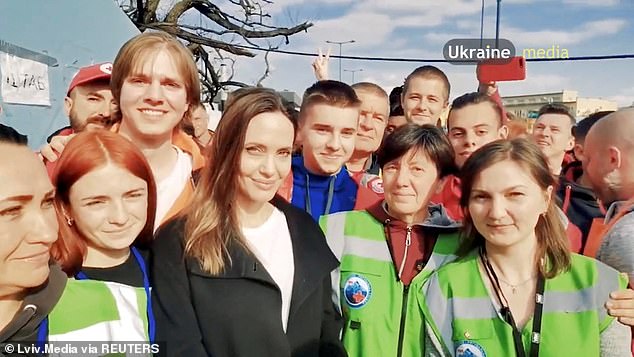 A spokesman denied that Miss Jolie, who has three adopted children, planned to adopt another, insisting that the secrecy around the orphanage visit was for security reasons.

Reporters who tried to approach the star at the train station on Saturday were told it was a private visit.

‘Angelina said her visit was not for press,’ said aid volunteer Rostyslav Hetman (CORR) who posed for a selfie with Ms Jolie at the station. 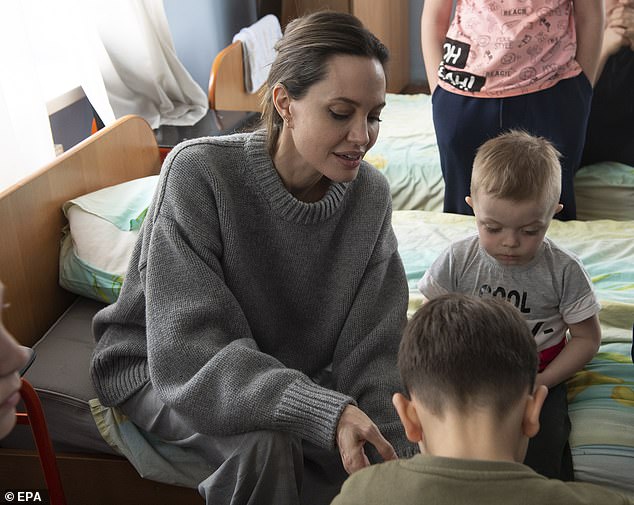 Ms Jolie visited the children’s hospital in Lviv. Here she is pictured with victims of the Kramatorsk railway station missile strike

However, Ms Jolie did pose for dozens of selfies and travelled with her own personal photographer who supplied pictures hand-picked by the star to the media.

Before giving birth to her three youngest children Shiloh, 14, and twins Knox and Vivienne, 13, who she had with actor Brad Pitt, Jolie became a mom to Maddox, 20, Pax, 18 and Zahara, 17, through adoption.

Maddox and Zahara were adopted from orphanages in Cambodia and Ethiopia by Angelina.

She and her ex-husband Billy Bob Thornton adopted her oldest child, Maddox Chivan in 2002. 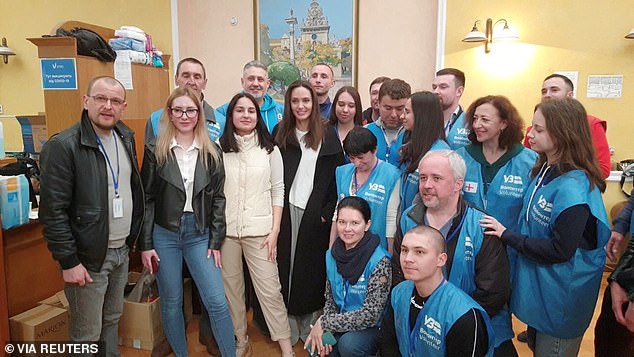 The pair took in Maddox after finding him in a Cambodian orphanage, but the adoption process took a while due to US government legislation.

Miss Jolie previously opened up about the importance of honouring her three adopted children’s roots in an interview with Vogue.

‘Each is a beautiful way of becoming family. What is important is to speak with openness about all of it and to share. “Adoption” and “orphanage” are positive words in our home,’ the Oscar winner said. 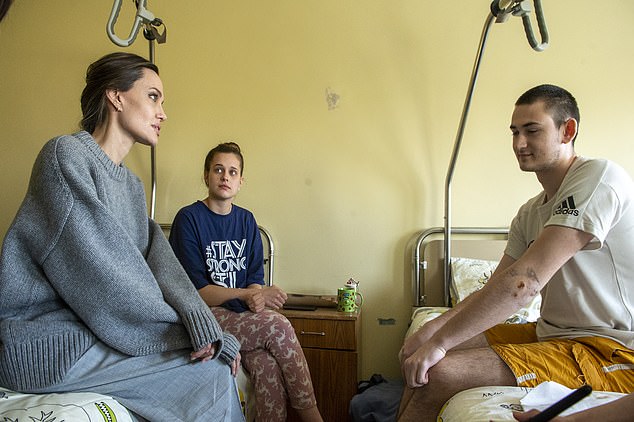 Reporters were told her visit was private. ‘Angelina said her visit was not for press,’ said aid volunteer Rostyslav Hetman (CORR) who posed for a selfie with Ms Jolie at the station. Here she is pictured with people at Lviv children’s hospital

She went on to describe her children as ‘six very brave, very strong young people.’

In the same interview, the movie star spoke of ending her marriage to Brad Pitt, whom she met in 2004 on the set of the film Mr. And Mrs. Smith, for the ‘well-being’ of kids.

The former Hollywood power couple – known as Brangelina – married in August 2014 after 10 years together.

But they split in 2016 after Mr Pitt and Maddox allegedly got into an argument on a private jet while on the way to Los Angeles.

The row led to Angelina filing for divorce that year. Mr Pitt was later cleared of any wrongdoing but a judge granted Angelina physical custody of all six children.