‘You are dead to me’: Ant McPartlin makes a jibe at I’m A Celeb’s Sue Cleaver during quiz trial as he quips that she SHOULDN’T have come on the show

I’m A Celebrity…Get Me Out Of Here! had their very own version of classic quiz show Who Wants To Be A Millionaire on Saturday evening, with a jungle twist.

And during the Bushtucker trial, presenter Ant McPartlin appeared to snap at campmate Sue Cleaver as she told him ‘don’t humiliate me on national television’.

The geordie TV star appeared unfazed as he replied: ‘Don’t come on the show then’, leaving the soap star to hit back: ‘You are dead to me’. 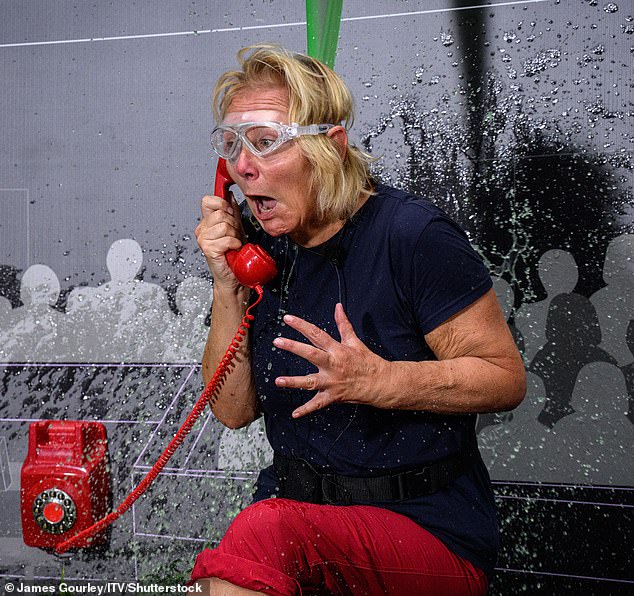 ‘Don’t come on the show then’: Ant McPartlin made a jibe at I’m A Celeb’s Sue Cleaver during Saturday’s quiz trial as she begged him ‘don’t humiliate me’

It was Matt Hancock and Owen Warner who were challenged with taking on the quiz, being covered by a plethora of slimy substances and feathers while they did so.

But following the layout of the famous game, Ant and co-presenter Declan Donnelly allowed the two men to ‘call a friend’ to help answer one question.

With their fellow campmates as an audience, the duo used this opportunity during a question which asked: ‘Which of these happened first?’ 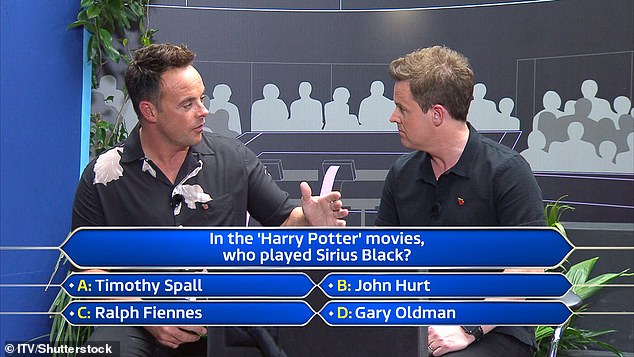 Awkward: The geordie TV star quipped: ‘Don’t come on the show then’, to Sue, after she had told him ‘not to humiliate me’ 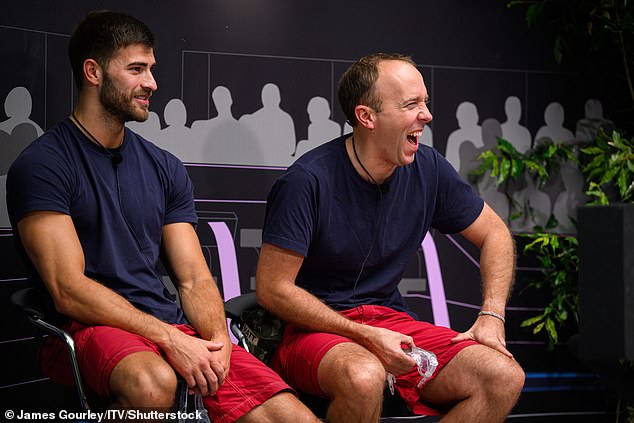 They’re up: It was Matt Hancock and Owen Warner who were challenged with taking on the Who Wants To Look Silly On Air challenge

With the options being: The release of The Beatles first single, president Nixon being elected, the Apollo 11 moon landing and the first episode of Coronation Street.

Matt and Owen called on Sue, who has been acting on Corrie for over 20 years, to help with their timeline.

‘We need to know when Coronation Street first aired,’ explained Matt, as Owen suggested: ‘Well let’s give Sue a bell’.

But as her name was brought up, the actress put her head in her hands and refused to move from her seat.

‘Sue, if you could just sit right up there in the corner please,’ asked Dec. 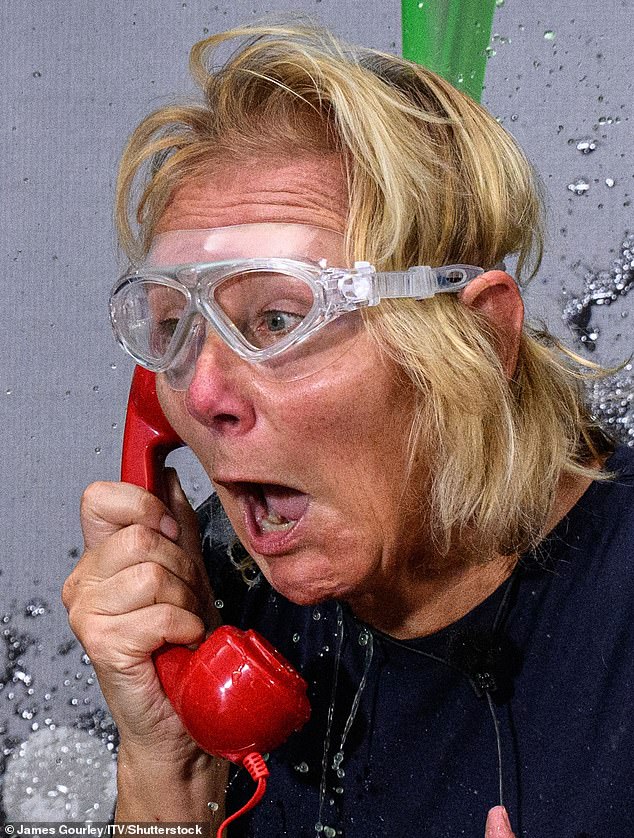 Helping hand: They called upon Sue, who has been on Coronation Street for over 20 years, for a question about the soap – getting it correct in the end 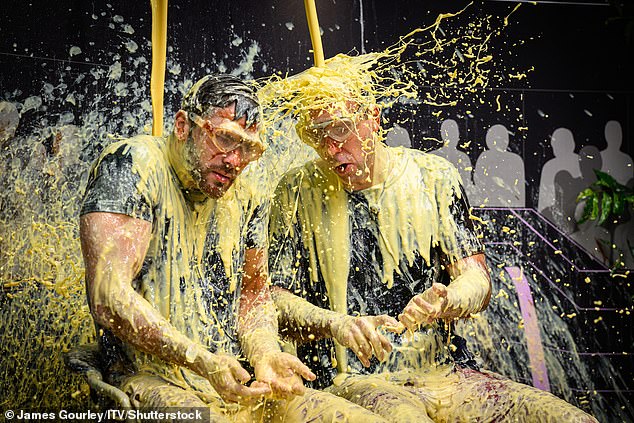 Soaked: Matt and Owen were covered by a plethora of slimy substances and feathers while they did the challenge

But an uncooperative Sue replied: ‘No, don’t humilate me on national television.’

Not taking the dig, Ant was quick to snap back: ‘Well don’t come on I’m A Celebrity then,’ as her the other campmates let out a giggle.

‘You are dead to me’, said Sue, before reluctantly answering the phone and taking part.

The soap star then made her way up to the phonebooth and managed to remember that the show is at least 60 years old, helping Matt and Owen successfully answer the question. 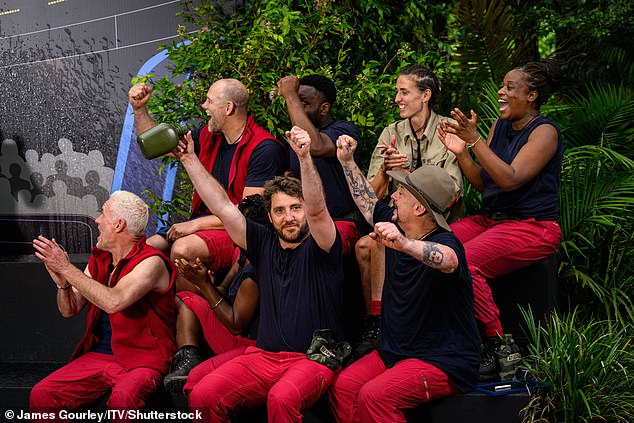 Studio audience: The campmates gathered to watch the trial live, in typical gameshow fashion, but caused a stir when they attempted to cheat on one question 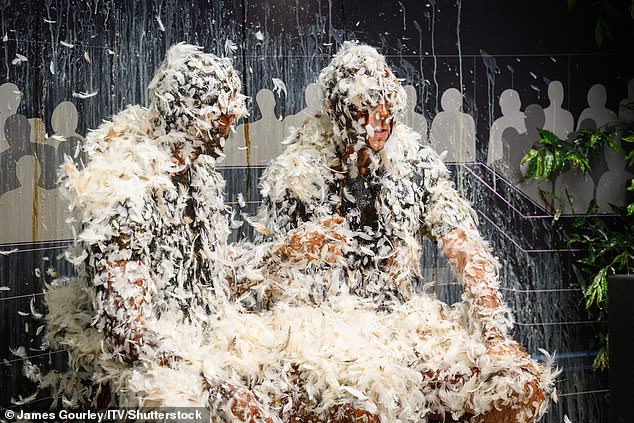 Finally over: Matt and Owen finished off covered in gunk and feathers, going back to camp with five out of 11 stars

During the trial, dubbed Who Wants To Look Silly On Air, the celebrities were caught trying to cheat – with the audience caughing and spluttering during one question to signal to Owen and Matt that they were on the wrong track.

Reprimanding their shady actions, Dec said: ‘We’re going to stop there as there was some audience cheating then… so we’re going to have to take your answer of C Michael Owen.’

Responding to the groans of the unhappy audience, he snapped: ‘It was your final answer as you all coughed! That was the rules guys!’ before revealing that the answer was in fact incorrect.

After battling their way through the questions, Matt and Owen finished off with five out of 11 stars for camp – meaning they were left with less food for the evening.