Ben Affleck was every inch the doting dad when he was spotted sharing an affectionate moment with his stepson Max on Monday.

The 50-year-old Oscar winner was seen wrapping his arms around his wife Jennifer Lopez’s son while he dropped by a studio in Los Angeles.

It wasn’t clear if Ben’s 53-year-old wife, who had some fun with him over the weekend while hosting a celebrity karaoke party, was working at the studio during the visit.

The Argo director was seen rocking a casual-cool look built around a stylish beige blazer as he headed into the studio. 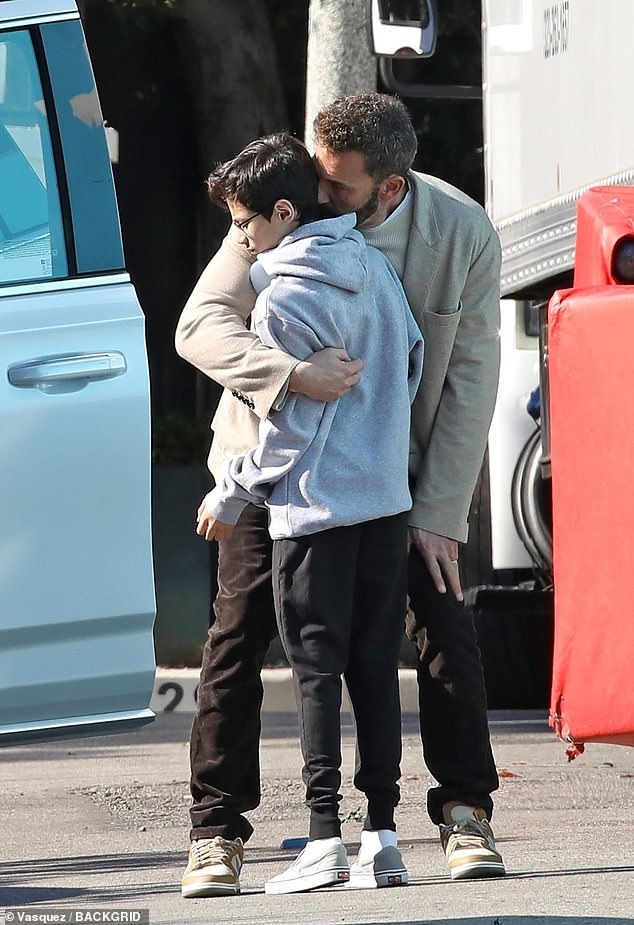 Too cute! Ben Affleck, 50, shared a loving hug with his stepson Max, 14 — whom he shares with wife Jennifer Lopez, 53 — as he arrived at a studio in LA on Monday

Ben complimented the jacket with a cozy cream-colored sweater, along with black jeans and brown, white and blue Nike sneakers.

Max was dressed casually and comfortably in a gray hoodie with black sweatpants and gray slip-on sneakers.

Ben appeared to be exiting a waiting vehicle just as Max was heading toward it.

The Last Duel actor and co-writer leaned down to Max’s height and wrapped an arm around him for a hug while Max’s arms were stuck down at his sides.

His stepfather leaned in toward the side of his head, possibly for a kiss or to whisper something to him. 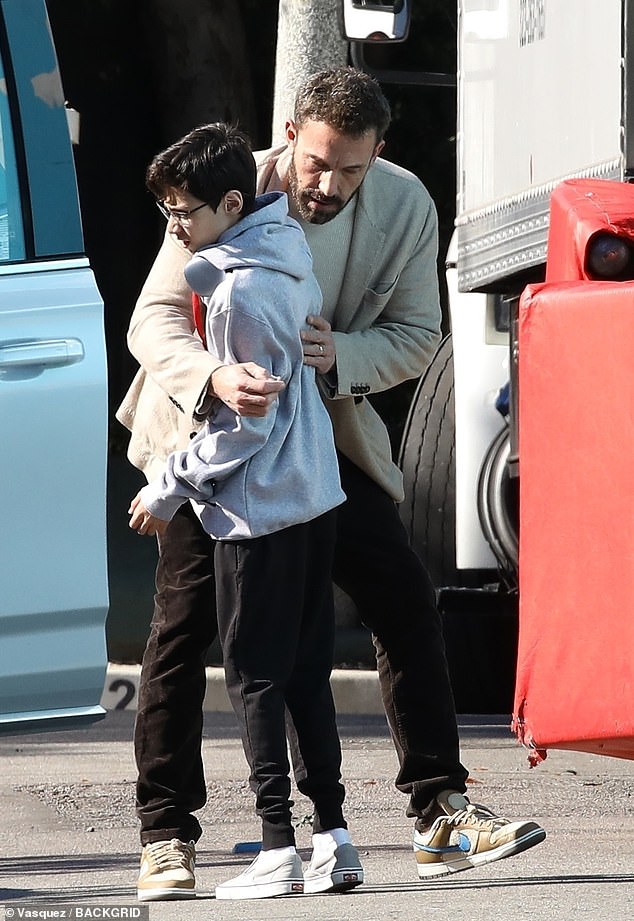 Sweet: Ben leaned down to hug Max and went in for a kiss or to whisper something to him. He looked cool in a beige blazer with a cream-colored sweater, black jeans and Nike sneakers

After their embrace, Max appeared to head on toward the car, while Affleck dashed into the studio.

Max didn’t appear to have been joined by his twin sibling Emme, and Ben’s own children from his previous marriage to Jennifer Garner — Violet, 17; Seraphina, 13; and Samuel, 10 — weren’t seen either.

Ben married Max’s mother Jennifer in April of this year in a low-key Las Vegas wedding, before repeating their nuptials with a lavish ceremony for friends and family and his enormous plantation-style estate in Riceboro, Georgia.

The couple began dating again in April of 2021, before getting engaged in April of this year.

It was the lovebirds’ second try at romance after they dated from 2002 to 2004, which led to a failed engagement. 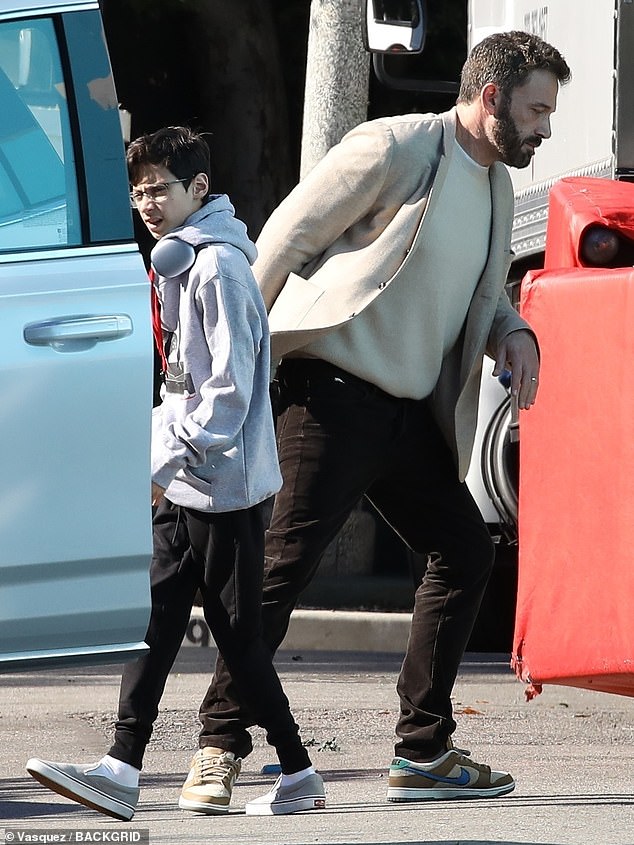 Passing paths: Max — who wore a gray hoodie, black sweatpants and gray sneakers — was seen heading toward a car afterward while Ben went toward the studio

Ben has made all of his children — including his step-children with Jennifer — a major priority, and he was seen enjoying a game of hoops with his youngest child Samuel on Saturday.

His concerns about spending as much time as possible with his children led the actor to even change up his role in Ridley Scott’s critically acclaimed box office bomb The Last Duel.

After reuniting with his friend Matt Damon, with whom he co-wrote the Oscar-winning screen to Good Will Hunting, and the filmmaker Nicole Holofcener to craft the script for The Last Duel, he was originally set to play opposite Damon as a squire accused of raping a knight’s wife.

But Affleck later decided to play a smaller supporting role while being replaced in the lead part by Adam Driver so that he wouldn’t be away from his children as long, as the film was being shot abroad in France and Ireland. 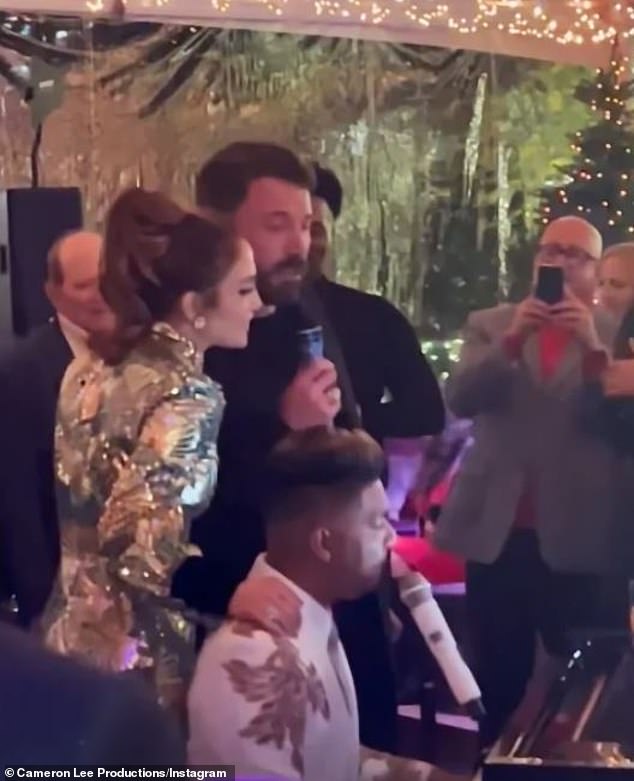 In the moment: Ben and Jennifer hosted a Christmas party on Saturday at their home in Hollywood, with guests like Kim Kardashian, Billie Eilish and more 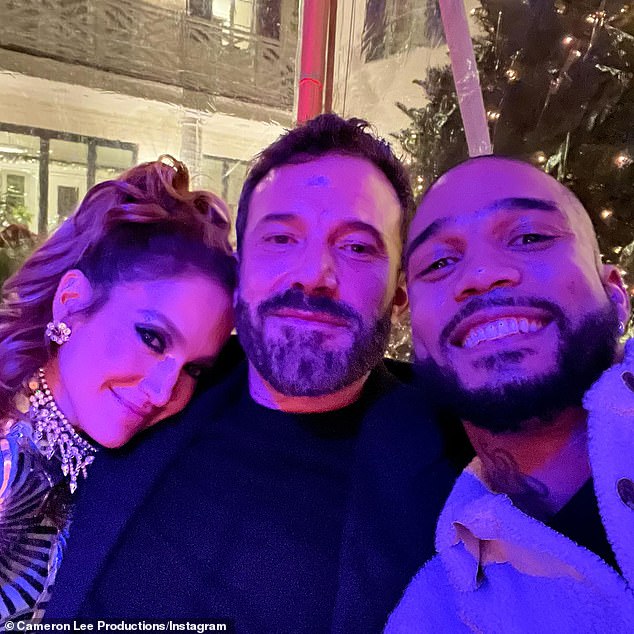 Star power: During the party, Ben and Jennifer serenaded guests with John Legend’s song By Christmas Eve alongside vocal coach Stevie Mackey on the piano, according to Us Weekly

On Saturday, Ben and Jennifer showed they were as in love as ever when they sang John Legend’s By Christmas Eve at a karaoke party they threw at their Hollywood home.

The couple were joined by the vocal coach Stevie Mackey on the piano, according to Us Weekly.

The two reportedly shared a passionate kiss after wrapping up the performance, which received a round of applause from guests.