Beyonce and her husband Jay-Z were one stylish couple in a trio of snaps shared to her Instagram account on Saturday.

In the shots, the 40-year-old songstress and her spouse were pictured enjoying themselves while they relaxed with their close friends on what appeared to be a private yacht.

The performers have been romantically involved for nearly two decades, and they currently share two daughters and a son. 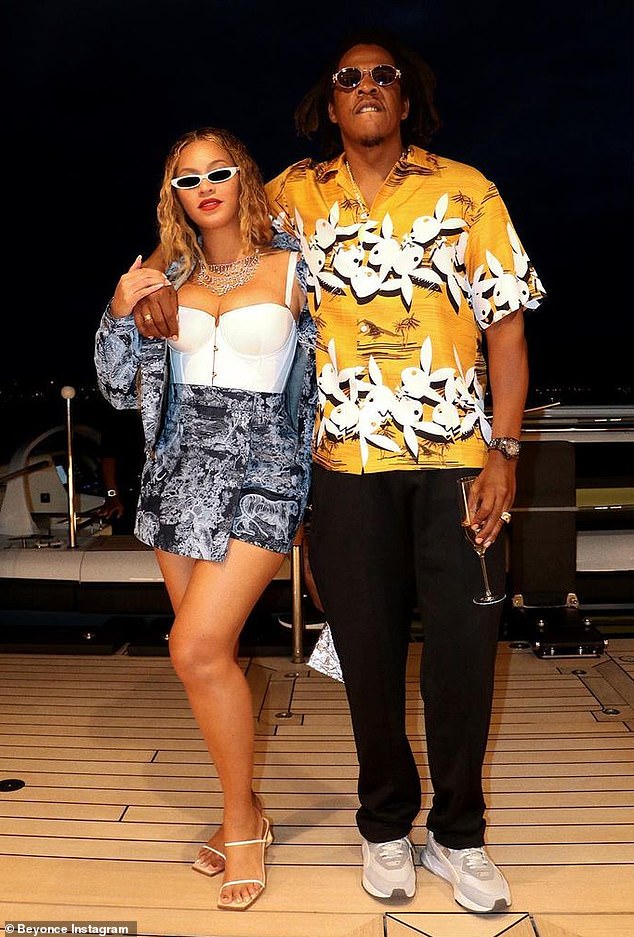 Happy couple: Beyonce was seen being held by her husband, Jay-Z, in a shot from one of three photosets that were shared to her Instagram account on Saturday

Beyonce wore a beautifully patterned and neutral-toned jacket that was paired with a matching skirt, which served to show off her beautifully sculpted legs.

The Love On Top singer added elements of brightness to her clothing ensemble with a white corset that left little to the imagination, as well as pairs of high-heeled shoes and sunglasses that matched her top’s tone.

The Grammy-winning singer notably sported a gorgeous diamond necklace and a pair of sparkling earrings that added a bit of shine to her outfit.

Her beautiful brunette hair gently fell onto her shoulders and backside as she posed for the sizzling snaps. 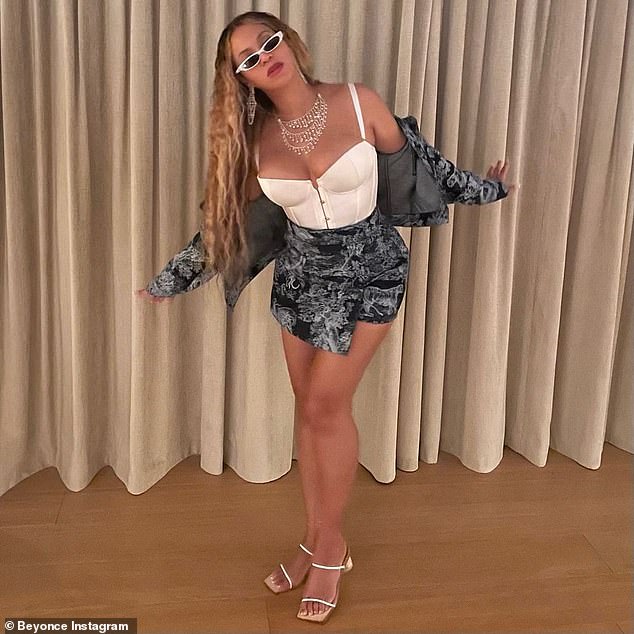 Looking good! The singer wore a beautifully patterned and neutral-toned jacket and a matching skirt that showed off her toned thighs and legs 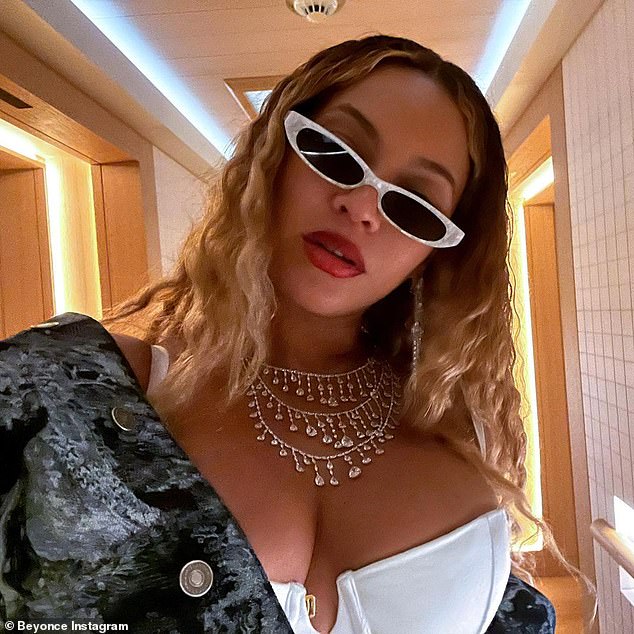 Stylish singer: The performer also wore a tight-fitting white corset that left little to the imagination in the shots

Jay-Z wore a yellow Hawaiian shirt that featured numerous Playboy Bunny designs on its front and back portions while spending time with his wife.

The 51-year-old hitmaker contrasted his top with a pair of slightly loose-fitting black trousers that added an element of darkness to his clothing ensemble.

The Beware rapper also kept it slightly casual during the boating excursion, as he wore a pair of light gray athletic shoes.

He also sported a pair of gold-framed sunglasses that paired well with the dark yellow shade of his shirt. 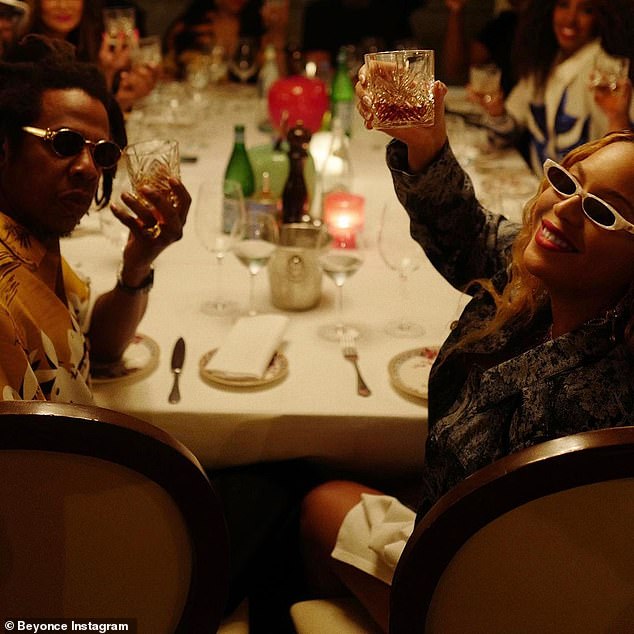 Good times: The happy couple was seen raising their glasses while spending time with their friends at a dinner party

In one of the shots from the sets, the couple was seen holding up their glasses while enjoying the company of their friends during a dinner party.

The superstar pair were first introduced when the Single Ladies singer was just eighteen years old, and they developed a close friendship not long after their initial meeting.

The two went on to begin a romantic relationship, although they initially withheld news of their connection from the public.

In 2002, the pair collaborated on the track ’03 Bonnie and Clyde, which went on to peak at the number four position on the Billboard Hot 100 chart. 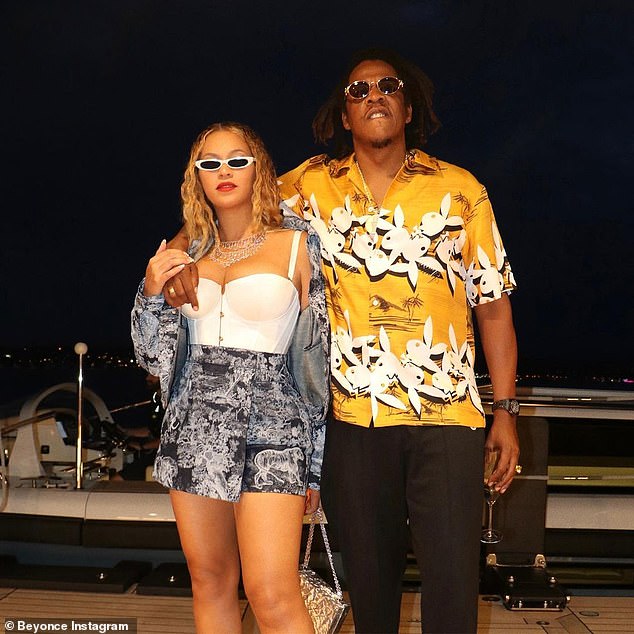 Starting off strong: The pair initially met when Beyonce was just 18, and they developed a close friendship that eventually turned into a relationship

The following year, Beyonce and Jay-Z collaborated on Crazy In Love, and they went on to take home the Grammy Awards for Best R&B Song and Best Rap/Sung Collaboration for their work on the track.

They later made their red carpet debut during the 2004 MTV Video Music Awards and collaborated on several more tracks during the time period.

The happy couple went on to tie the knot during an intimate wedding ceremony in 2008, although they did not make the news about their nuptials immediately known to the public.

Jay-Z later confirmed that he and the songwriter had tied the knot in an interview that was published that August. 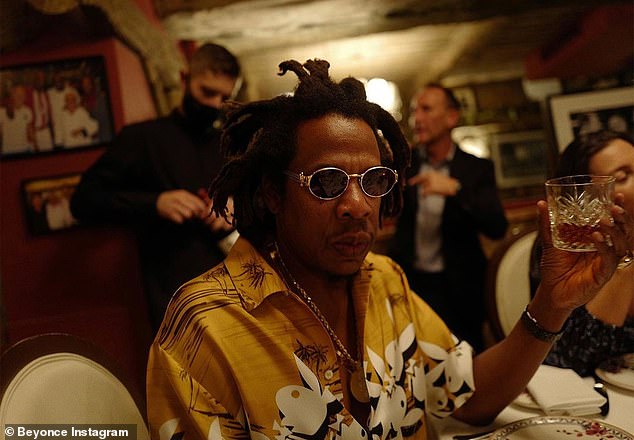 Making it official: Jay-Z and Beyonce tied the knot in 2008, and the rapper confirmed that they were married during a 2008 interview

In 2011, Beyonce revealed that she and her husband were expecting to welcome a child into their lives during that year’s VMA’s.

She went on to give birth to the couple’s eldest daughter, Blue Ivy, the following January, with the first photos of the child being released in February.

The rapper fielded accusations of infidelity throughout the mid-2010s, many of which were later confirmed and addressed by the couple, although they have worked on their marriage and remained together.

In February of 2017, the pair announced that they would be welcoming more children in the future, and the singer gave birth to a daughter named Rumi and a son named Sir that same June. 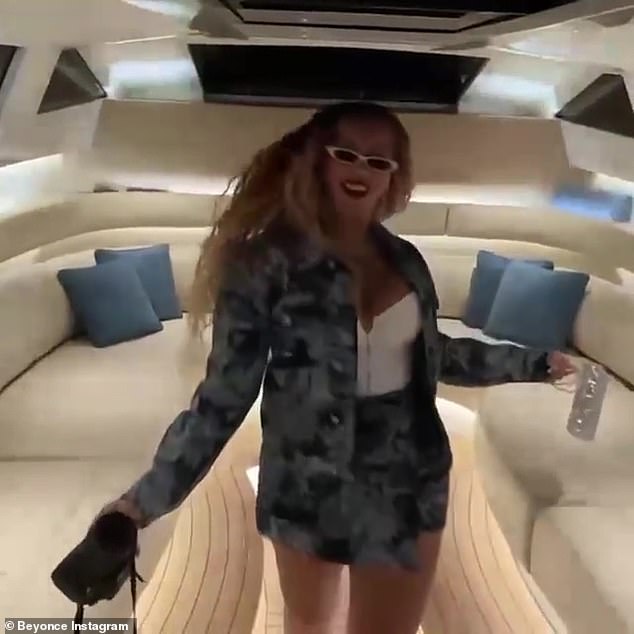 Proud parents: The happy couple welcomed their eldest daughter in 2012, and they went on to welcome a pair of twins five years later