There appeared to be a bizarre love triangle at play on Monday evening.

A Star Is Born actor Bradley Cooper, 47, hit the CFDA Awards in New York City looking dapper in a black suit and blue shirt with no tie and his brown hair worn slicked back as he posed with rocker Lenny Kravitz.

Also there was his 36-year-old on-again partner Irina Shayk in a black and white dress whom he was caught touching in a tender way over the weekend; together they share a daughter, Lea De Seine Shayk Cooper, age five.

And not to be left out was Cooper’s alleged one-time girlfriend, 46-year-old Huma Abedin.

Rounding out the night was 73-year-old Vogue editor Anna Wintour who supposedly played matchmaker between Bradley and Huma, per a summer report. 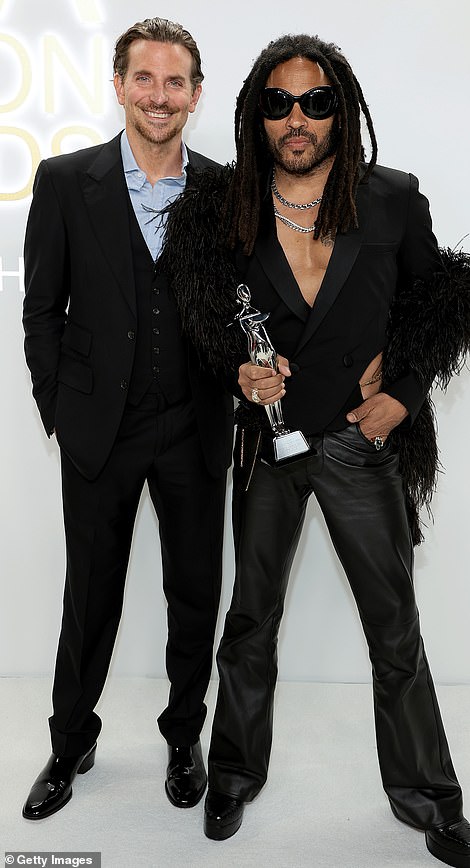 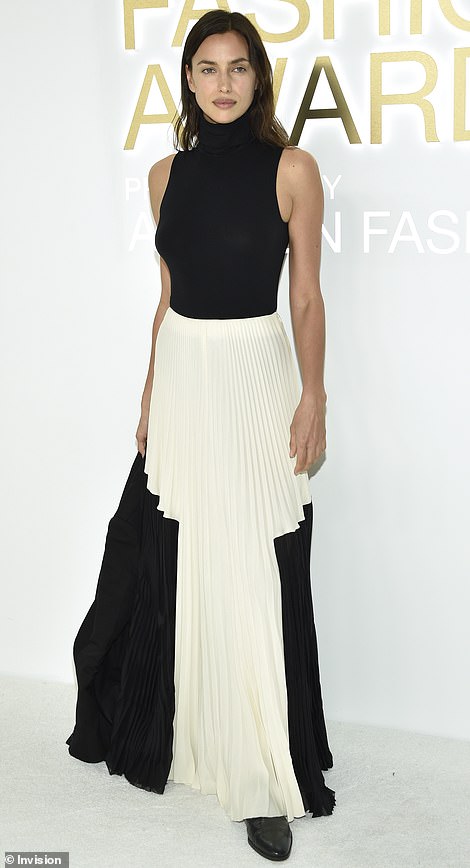 Same place, same time: It was a strange evening for love triangles on Monday evening. A Star Is Born actor Bradley Cooper, 47, hit the CFDA Awards in New York City looking dapper in a black suit and blue shirt with no tie and his brown hair worn wild. He posed with rocker Lenny Kravitz. Also there was his on-again love Irina Shayk in a black and white dress whom he was caught touching in a tender way over the weekend; together they share a daughter, Lea De Seine Shayk Cooper, age five

None of them were seen in the same frame as they appeared to keep their distance on the red carpet.

Bradley is a film star who has been nominated for an Oscar and will next star in Maestro about legendary composter Leonard Bernstein.

Irina is a fashion model who is a Vogue favorite; she will next appear in Rihanna’s Savage x Fenty runway show.

And Huma – born Huma Mahmood Abedin – is an American political staffer who was vice chair of Hillary Clinton’s 2016 campaign for President of the United States.

They were there too: And not to be left out was Cooper’s alleged one-time girlfriend, 46-year-old Huma Abedin, left. Rounding out the night was Vogue editor Anna Wintour, right, who supposedly played matchmaker between Bradley and Huma

Before that, Abedin was deputy chief of staff to Clinton when she was U.S. Secretary of State from 2009 to 2013.

She is also the ex-wife of the disgraced New York congressman Anthony Weiner.

Wintour is one of the most powerful people in fashion as she heads up Vogue and has a lot of say in the Conde Nast empire. She also rules over the annual Met Gala.

Over the weekend Bradley seemed to be back on with Irina as he placed his hand on her bottom.

In July PageSix reportedly Bradley and Huma were dating after being set up by Wintour.

The power couple were allegedly seeing each other for several months in secret and even arrived at the Met Gala together in May 2022 before parting ways to keep their affair under wraps.

Abedin and Bradley are both good friends of the longtime Vogue editor. 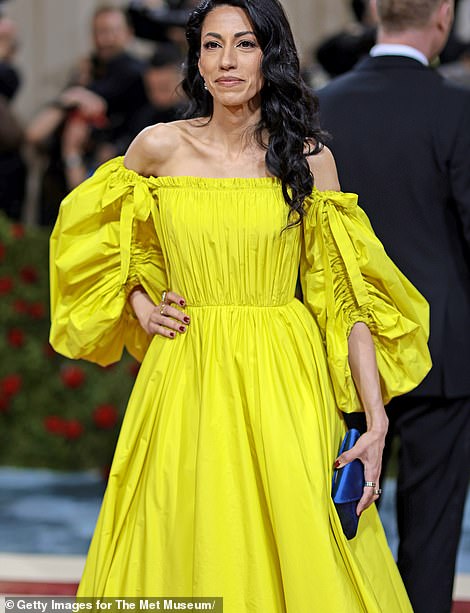 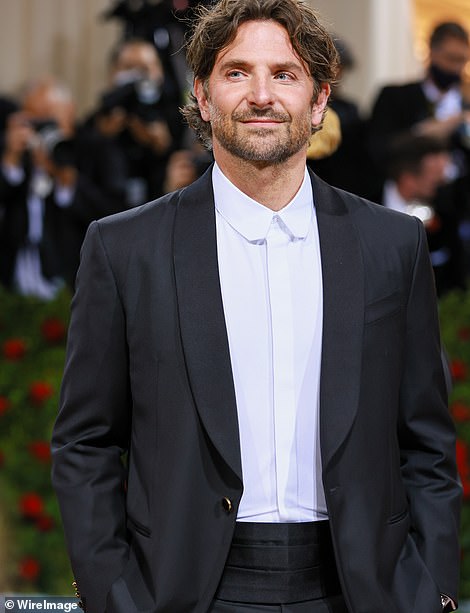 This spring: Abedin and Bradley were reportedly dating after being set up by Vogue editor Anna Wintour, 72; seen in May at the Met Gala

‘Bradley has been quietly dating Huma for a few months now, [and] they’ve been keeping it really quiet,’ the insider said.

The source added that Abedin has confided that she was in a relationship, but was keeping the identity of the ‘new man’ in her life from even them.

‘She didn’t say who it was. She was keeping it very close to her chest.’

The relationship with the A-list actor is a far cry from Abedin’s marriage to Weiner, who was sentenced to 21 months in prison in 2017 for sexting a minor.

She wrote about the harrowing experience – which saw her caught in the middle of the media circus caused by her husbands lurid behavior – in a 2021 memoir, Both/And: A Life in Many Worlds. In it she revealed that she didn’t lost her virginity till she was with Weiner at 32-years-old.

‘I had my heart broken, dragged out, stomped on, humiliated. I lived with shame, in shame, for so long,’ she told The Cut in a 2021 interview before the release of her memoir, ‘In hindsight, I was in extreme trauma.’

Abedin told The Cut that the memoir was Wintour’s idea, adding that the famously icy editor was one of her strongest sources of comfort, and came to her ‘rescue’ during the public turmoil caused by her husband, who she shares a 10-year-old son with.

‘Just being out and being with her, I just felt sort of normal and loved,’ she said.

‘Bradley is a big step up from Anthony Weiner, to say the very least,’ the inside source said.

Abedin, a devout Muslim, was born in Michigan to two professors of Indian and Pakistani descent. When she was two-years-old both of her parents were offered teaching posts at the University of Jeddah in Saudi Arabia, where she lived until she attended college in the United States.

She enrolled in George Washington University in Washington DC, where she undertook an internship at the White House and was posted to assist Hillary Clinton – then the first lady.

Abedin held a position as the backup to Clinton’s aide for several years before assuming the role as personal advisor during her US Senate campaign in 2000.

She served as Clinton’s close personal advisor – valued for her insight on the middle east – up through her failed 2016 presidential bid.

Abedin started dating Weiner – then a congressman – in 2007. The pair were married in 2010, and their son, Jordan, was born the next year.

The pair announced their plans to separate in 2016 following years of embarrassing and criminal sexual scandal from Weiner. They are reportedly still finalizing their divorce. 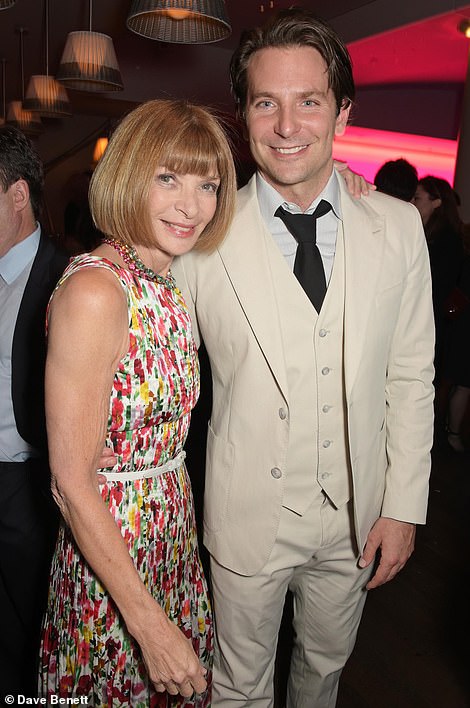 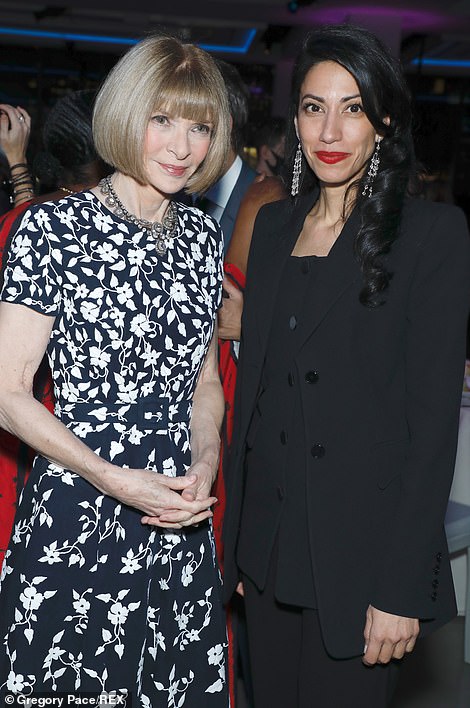 Pals: Cooper and Wintour have reportedly been close friends for years (see together in 2015, left). Wintour and Abedin are also pals (seen together at event in 2021, right)

The relationship is a change up for Cooper, too, whose love life has long been marked by relationships with and rumors about models, movie stars, and pop singers.

According to Page Six, Cooper was seeing singer and actress Dianna Agron before he broke it off and shacked up with Abedin.

‘Bradley broke up with Dianna Agron and started dating Huma,’ the insider said.

Cooper dated Russian Shayk – who appeared on the cover of the 2011 Sports Illustrated swimsuit edition – for just over four years between 2015 and 2019.

During his relationship with Shayk, rumors swirled that he and A Star is Born co-star Lady Gaga were having an affair when they were seen getting close on and off the set of the torridly intimate film. Both denied the rumors and insisted they were merely close friends.

Before Shayk, Cooper was with model Suki Waterhouse for two years, and actress Zoe Saldana for two.

He dated fellow A-lister and Case 39 costar of Renee Zellweger following the breakup of his marriage to Jennifer Esposito.

He and Esposito’s marriage was short-lived – they were engaged in October 2006, and she filed for divorce in May 200

Cooper and Abedin’s previous love lives couldn’t be more different, the inside source felt that just like Wintour knows how to pick a dress, she can pick a couple too.

‘They are perfect for each other. They’re both into power and politics and human affairs,’ the source said. 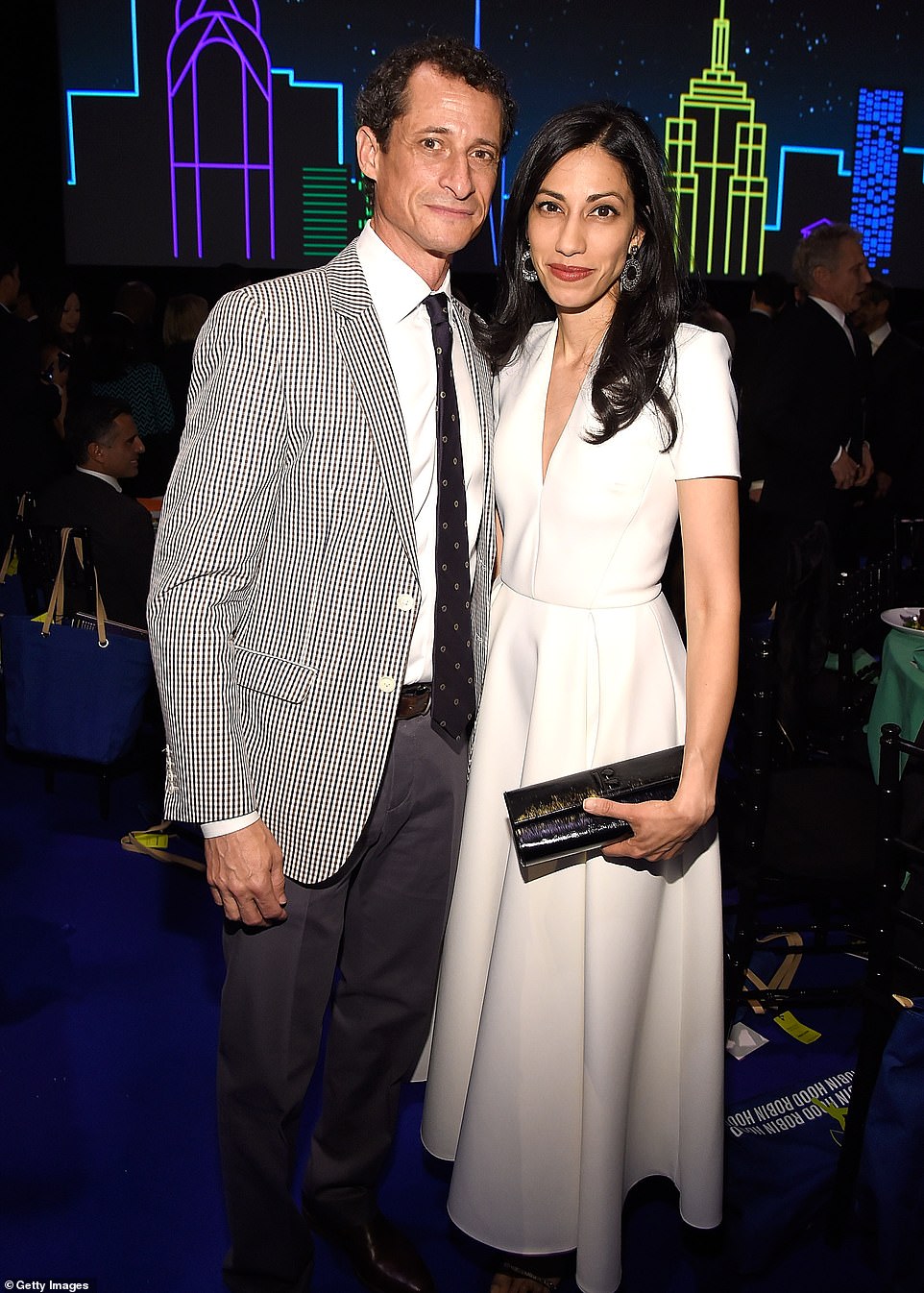 Abedin with disgraced ex-husband Anthony Weiner. In a 2021 memoir, she wrote  ‘had my heart broken, dragged out, stomped on, humiliated,’ during her their marriage; seen in 2016 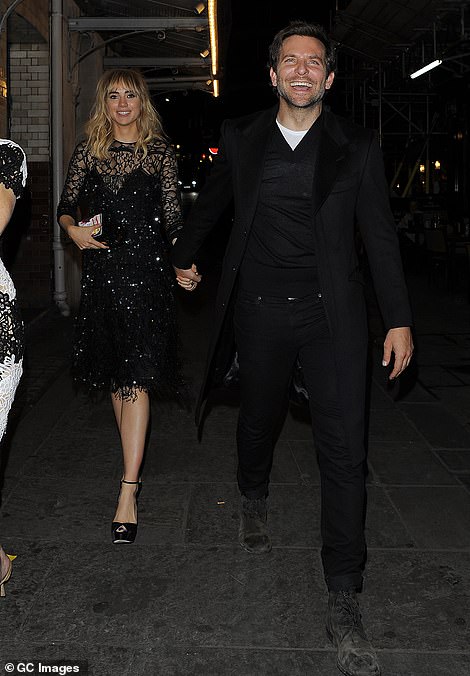 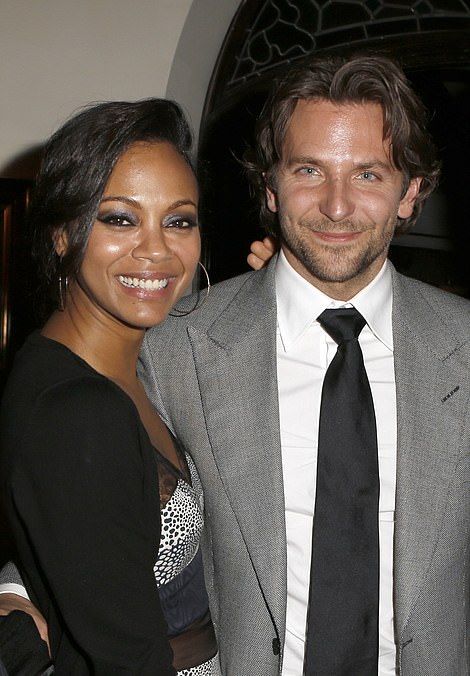 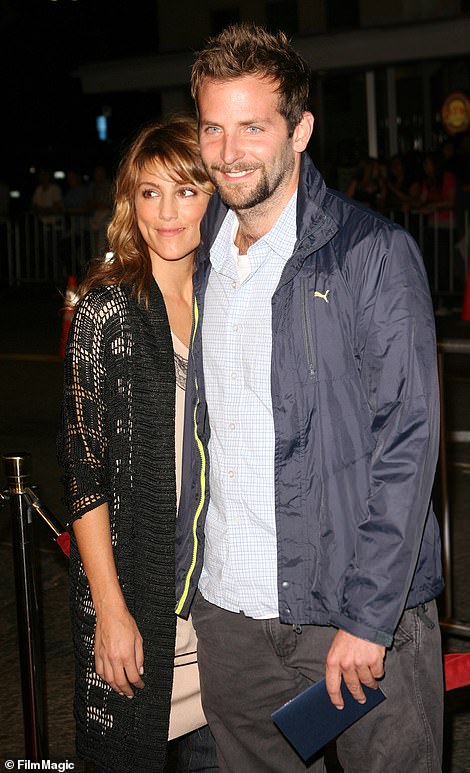 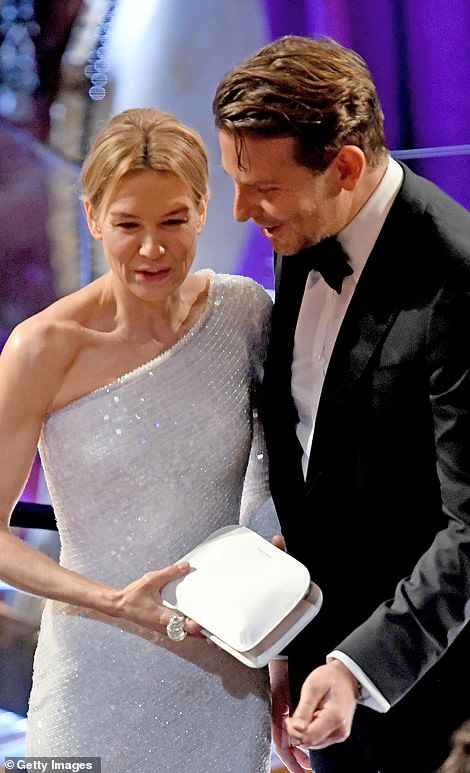 Cooper and Esposito’s marriage was short-lived – they were engaged in October 2006, and she filed for divorce in May 2007. Cooper and Renee Zellweger reunited at the 2020 Academy Awards in Los Angeles. The pair dated after the breakup of Cooper’s marriage to Jennifer Esposito

Cooper was raised outside of Philadelphia and was inspired to be an actor at an early age after his father introduced him to movies. He attended Villanova and Georgetown Universities, where he participated in theater programs.

In 1999 he held a brief role in Sex and the City, and a year later travelled the world as a presenter with the travel series Globe Trekker.

His first major film appearance was in Wet Hot American Summer in 2001, and he held a recurring role in the television show Alias from until 2006.

Cooper held supporting roles in a number of comedies after Alias, and saw his breakthrough as a leading character in the blockbuster comedy The Hangover in 2009, a role which turned him into a household name.

He appeared in the highly acclaimed Silver Linings Playbook in 2012, and received four academy awards from 2012 to 2014 for that film, American Hustle, and American Sniper.

In 2018 he wrote, directed and produced A Star is Born, which earned him three Oscar nominations and two Grammys.