Britney Spears shares NUDE snap of herself on beach on Instagram

Britney Spears shared another fully nude photo of herself onto her main Instagram page on Monday not long after making a grand return to the platform.

The Grammy award-winning singer, 40, posed on a sandy beach in the latest racy snap, using flower emojis to cover her breasts.

The star started posting on the social media outlet on Sunday after deactivating her account earlier this month on October 13. 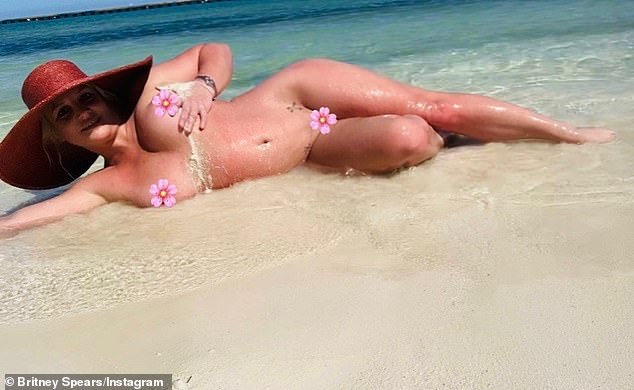 Latest post: Britney Spears, 40, uploaded a fully nude photo onto her main Instagram page earlier Monday shortly after returning to the platform over the weekend on Sunday

The Hold Me Closer hitmaker could be seen posing on a sandy shore near shallow water, wearing nothing but a sun hat to shade her eyes from the bright sun.

For the caption of her post, Britney added three red lipstick emojis and the letters ‘MX,’ referencing to a trip to Mexico.

The singer uploaded the photo to her 41.8 million followers, however, the comment section was flooded with concerned responses or followers asking the star to stop posting nude snaps.

One user typed out, ‘We get it already. Lol, I swear I’ve seen you naked more than I’ve seen myself naked.’ 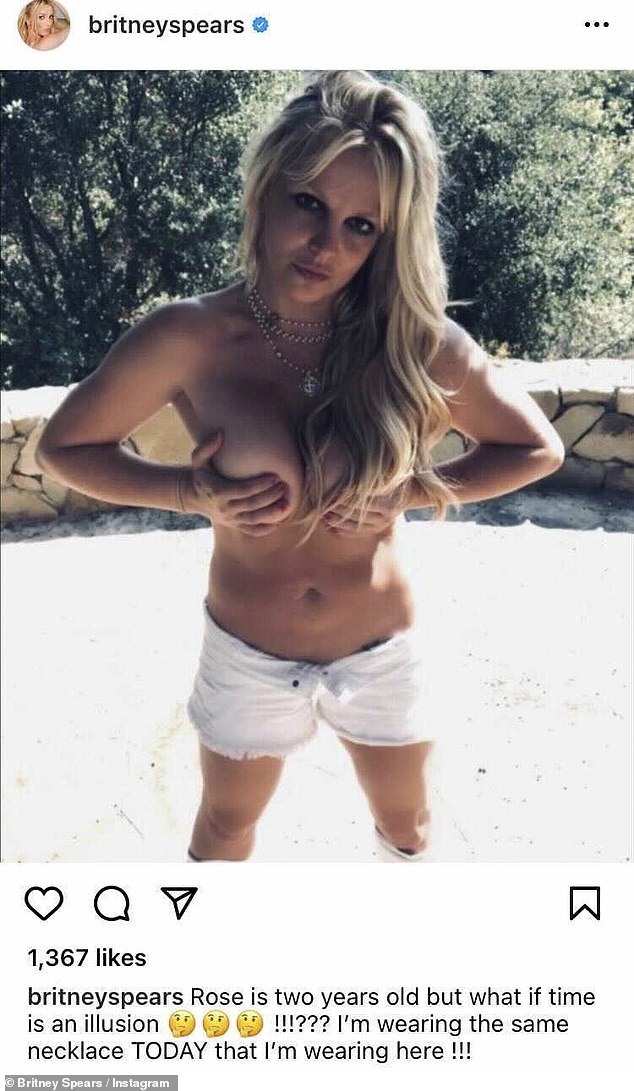 Returning: Earlier on Sunday, the performer returned to her Instagram account by sharing a topless photo of herself to her followers

Another follower added, ‘Enough with the nudity already ! How desperate are these repetitive naked posts?’

One Instagram commenter speculated that Britney was not actually posting the photos herself, writing, ‘Here we go again, why? who is in charge of this account? I don’t think she is posting this, maybe this is a trip from several years ago and someone is keep posting pictures from years ago.’

Britney, however, is no stranger to sharing revealing posts on her social media. On Sunday, the star uploaded a topless photo of herself to make a grand return to Instagram after deactivating her page.

The singer donned only a pair of white shorts, and used her hands to cover her breasts in the snap. 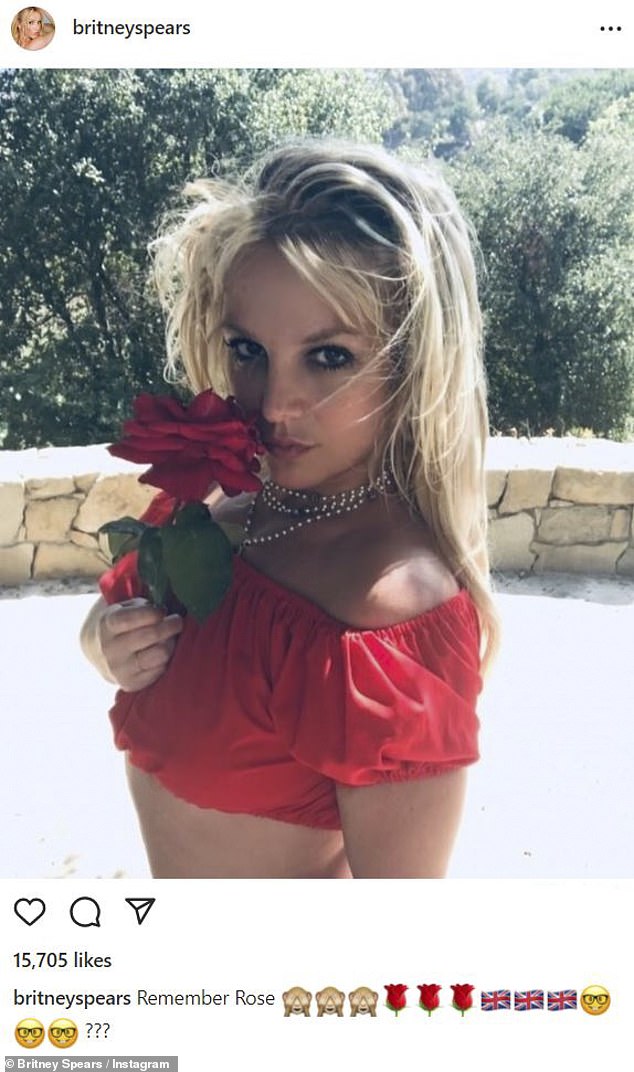 A rose: Along with the topless post she shared over the weekend on Instagram, the singer shared a throwback snap of herself holding a red rose asking ‘Remember Rose’ in the caption

In the caption, she typed out, ‘Rose is two years old but what if time is an illusion!!!??? I’m wearing the same necklace TODAY that I’m wearing here!!!’

Once again, Britney’s followers and social media users jumped to the comments, attempting to decipher what ‘Rose’ means, and to also give their thoughts on the photo.

‘I think she is trying to say, that she feel controlled still, even after two years, and justice is not moving forward… That is what I’m reading… I hope she is ok though, like where is she? I hope she is doing what she loves and felling happy. Nothing more,’ one user wrote.

During her short break from Instagram, the singer spent time on Twitter, and shared an additional fully nude snap of herself posing on a bed earlier last week.

The racy snaps were shared after her teenage son, Jayden, whom she shares with her ex-husband, Keven Federline, had wished his mother to stop posting the explicit content during an interview with ITV News. 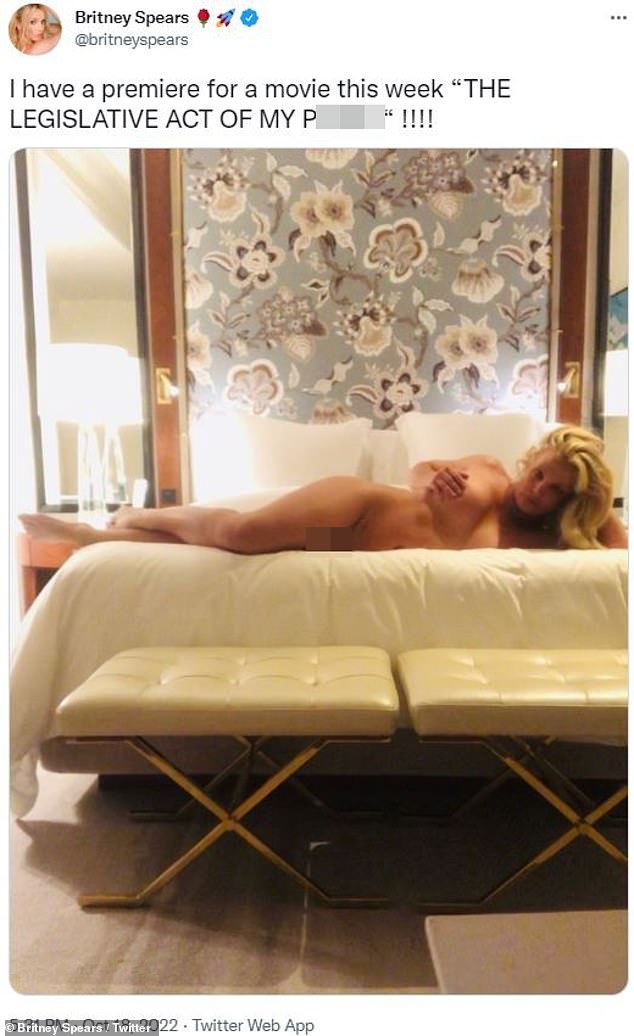 Other posts: During her short break from Instagram earlier this month, the star spent time posing on her Twitter page, including an additional fully nude photo

Support: One user defended the Hold Me Closer hitmaker, typing out that the star was ‘fine’

Britney made the choice to deactivate her Instagram shortly after she claimed that her mother, Lynne Spears, had slapped her in the past.

The star had explained that she had spent a night out with Paris Hilton and Lindsay Lohan, and was dropped off at her ‘beach house.’

She typed out on Instagram, ‘I partied till like 4am’ and claimed, ‘my mother was PISSED!!!! I walked in she looked at me and hit me so hard the I will never forget it!!!’

Britney then added, ‘Psss since then I’ve always wondered what it must feel like to slap someone…. GUESS I WILL NEVER KNOW!!!!! Stay classy folks!!!’

The entertainer later recounted on Twitter of another event involving Lynne and claimed her mother had shown a lack of care in a situation where she was ‘scared of people.’

The singer expressed she had traveled to see her mother and claimed, ‘She just STAYED SEATED with the phone in her hand and gave me the hold finger.’ 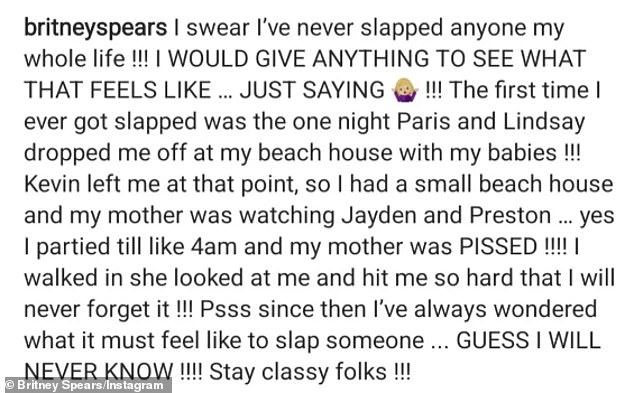 Recounting: Before leaving Instagram for a short time, Britney claimed that her mother, Lynne Spears, had slapped her 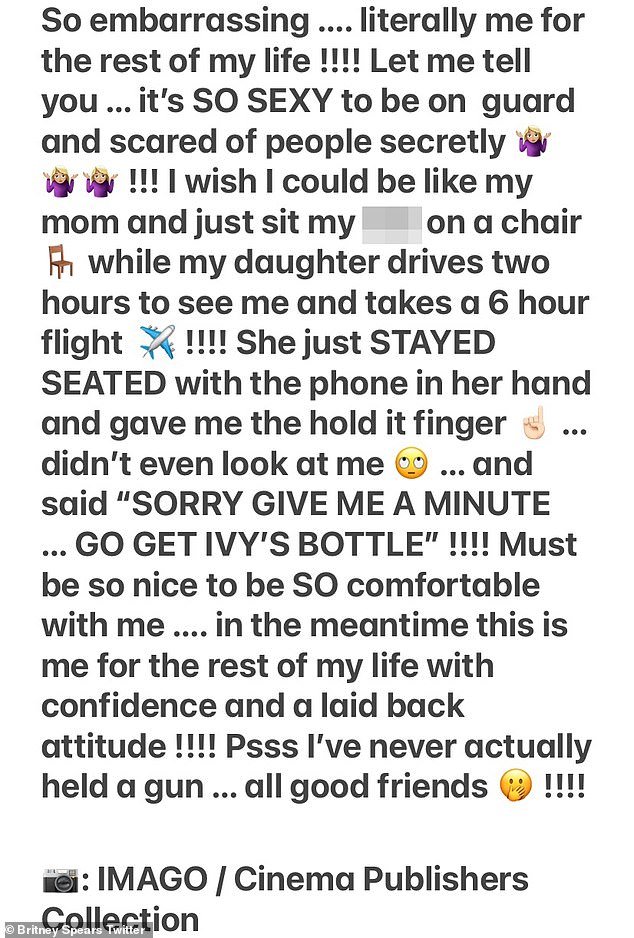 Other details: After claiming her mother allegedly slapped her, the performer detailed another past experience of her mother showing a lack of care towards her