Cardi B fired back at Candace Owens after the conservative commentator bashed her for deleting tweets about their ‘WAP’ feud.

Cardi B is ready to move on from her feud with Candace Owens, but Candace simply won’t let it die. The political pundit fired yet another shot at the rapper after seeing that she tweeted a number of tweets from their fight about her 2021 Grammys performance of “WAP.” Cardi tweeted back at Candace on March 18: “Actually I deleted all the tweets between us from the beginning because my platform is for fun and entertainment. The tweets between me & you was not entertaining anyone. It was getting boring. Get a life Candy it’s been two days.”

Candace had tweeted earlier in the day speculating why Cardi deleted the tweets, which included a claim that Candace’s husband had an affair with her brother. She wrote: “Too late, degenerate. You mess with my family, I won’t stop until I’m the CEO and chairman of that WAP…” whatever that means.

The controversy began after Cardi and Megan Thee Stallion performed their raunchy hit “WAP’ on the March 14 Grammy Awards. The song, which is about… you know… got equally scandalous choreography (which you can see here). Candace appeared on Tucker Carlson‘s Fox News show the following day and called it an “attack on American values, American traditions.” She likened the performance to “a lesbian sex scene being simulated on television” and claimed that it was “actively trying to make children aspire to things that are grotesque. We are celebrating perversity in America.”

Cardi was actually delighted by the insults. She tweeted to her fans, “Yaaaayyyyyyy WE MADE FOX NEWS GUYS!!! Wap wap wap… Matter fact I’m just going to thank Candy. She put my performance on Fox News giving it more views that boosted the views on YouTube and is counting towards my streams and sales.” The tweet has since been deleted. 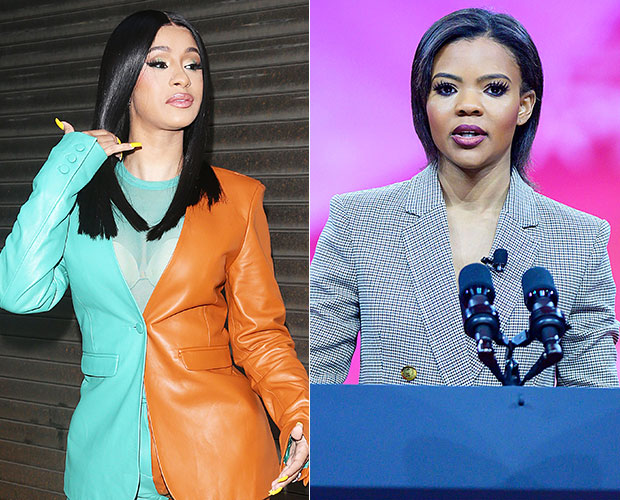 The animosity escalated as the women engaged in a back-and-forth on Twitter which included Cardi posting a nude photo from former First Lady Melania Trump‘s modeling days. It ended with Cardi challenging Candace to a debate. The women have both threatened to sue each other.