She’s been enjoying a sun-soaked break with her pals and new boyfriend, Hollyoaks actor Owen Warner.

And Chloe Ferry ensured all eyes were on her as she rocked a tiny thong bikini for a beach stroll in Portugal on Sunday.

The Geordie Shore star, 25, who recently hinted she was engaged to her new beau, looked sensational as she flaunted her famous curves in the snakeskin two-piece. 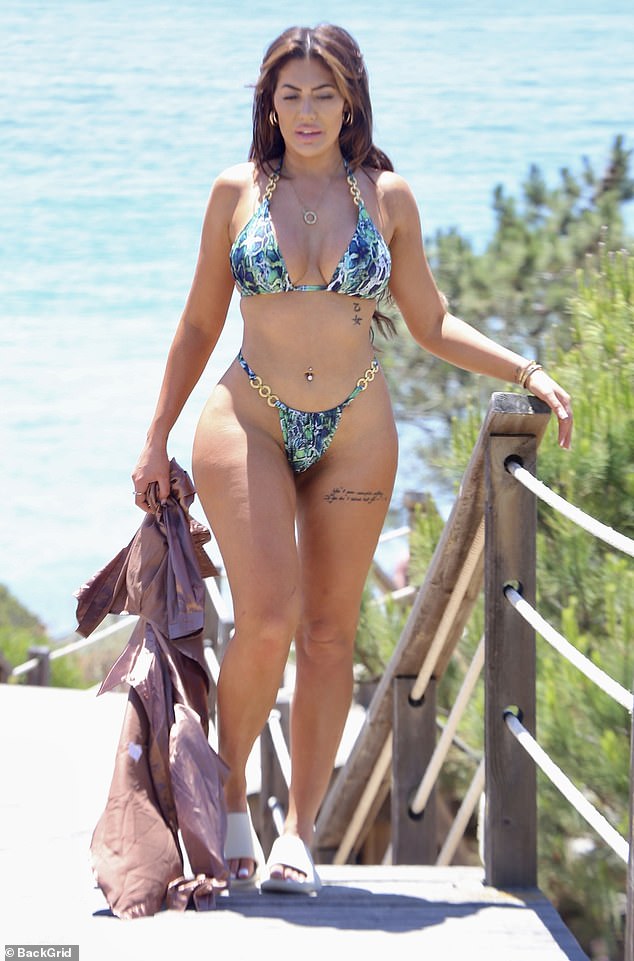 Wow: Chloe Ferry ensured all eyes were on her as she rocked a tiny thong bikini for a beach stroll in Portugal on Sunday

Chloe looked relaxed as she took in the stunning sea views and walked along the golden sand in her sexy bikini.

The beauty accentuated her pert derrière in the thong bottoms, which sat high on her hips and featured a stylish gold detailing on the front.

She wore her long locks down, letting them cascade down her back as she posed up a storm after stepping off the beach.

Not forgetting her glam, Chloe added a touch of makeup for the beach trip including a slick of pink blusher and lipstick. 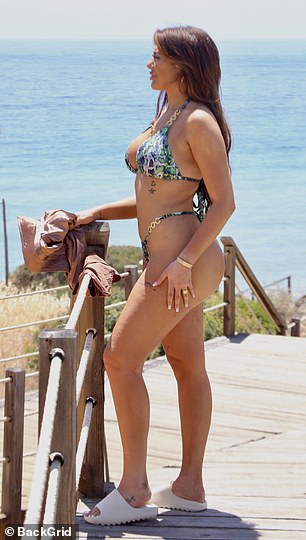 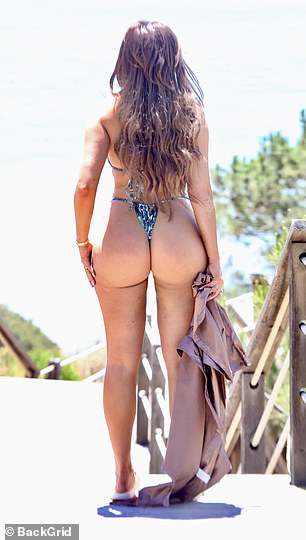 Work it: The Geordie Shore star, 25, looked sensational as she flaunted her famous curves in the snakeskin two-piece 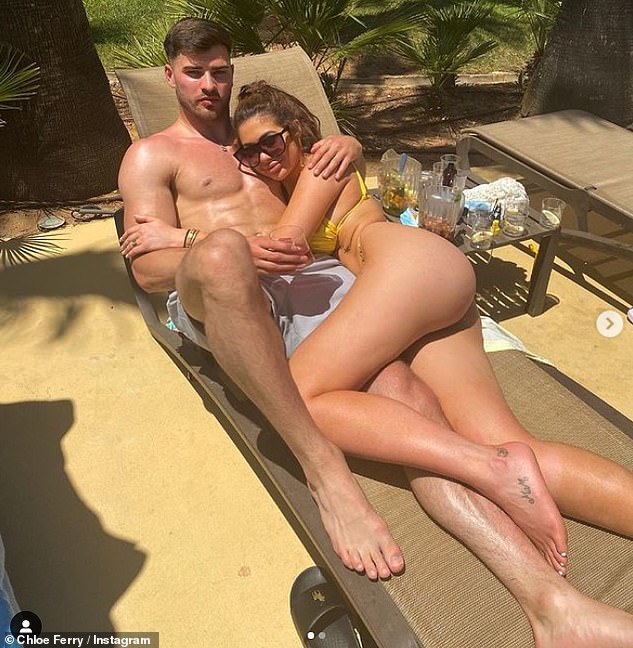 Big news? It comes after Chloe hinted that she is engaged after making her relationship to Hollyoaks hunk Owen Warner Instagram official on Saturday

The brunette beauty was joined for her walk by stunning pal Bethan Kershaw, who was also rocking a skimpy bikini.

Bethan opted for a neon orange number with yellow string ties sitting just above her hips and pulled her blonde locks back into a ponytail for the tanning session.

The two beauties happily chatted on the beach before quickly dipping their feet into the water, however they did not seem too impressed with the chilly climes.

Portugal is one of the 12 countries currently on the UK’s ‘green list’ following the easing of lockdown restrictions in Britain last week. 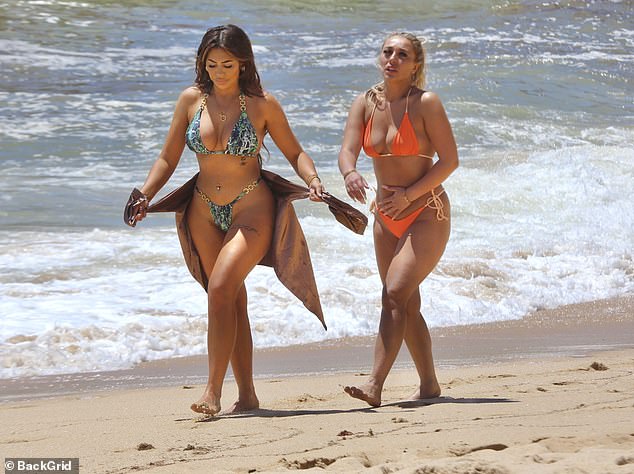 Pals: Chloe was joined by her bikini-clad friend Bethan Kershaw for the beach stroll 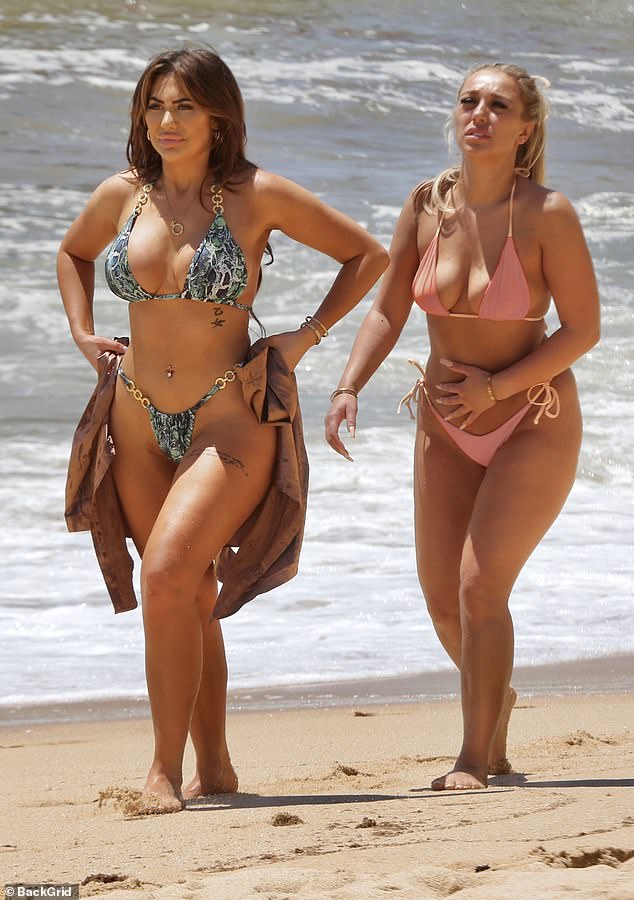 Looking good: The two beauties both opted for bikinis, with Chloe also accessorising her swimwear with a circle necklace

It comes after Chloe went public about her romance with Hollyoaks’ Owen Warner, 21, on Saturday, sharing a series of loved-up snaps to Instagram.

The beauty even hinted that she is engaged as she shared a picture of the duo putting on a very cosy display up on a sun lounger.

She appeared to confirm they are set to tie the knot as she penned in the caption: ‘Now I no what love feels like @_owenwarner,’ (sic) alongside a diamond ring emoji.

Her Geordie Shore pals were left confused by the apparent engagement news while others congratulated her on the announcement. 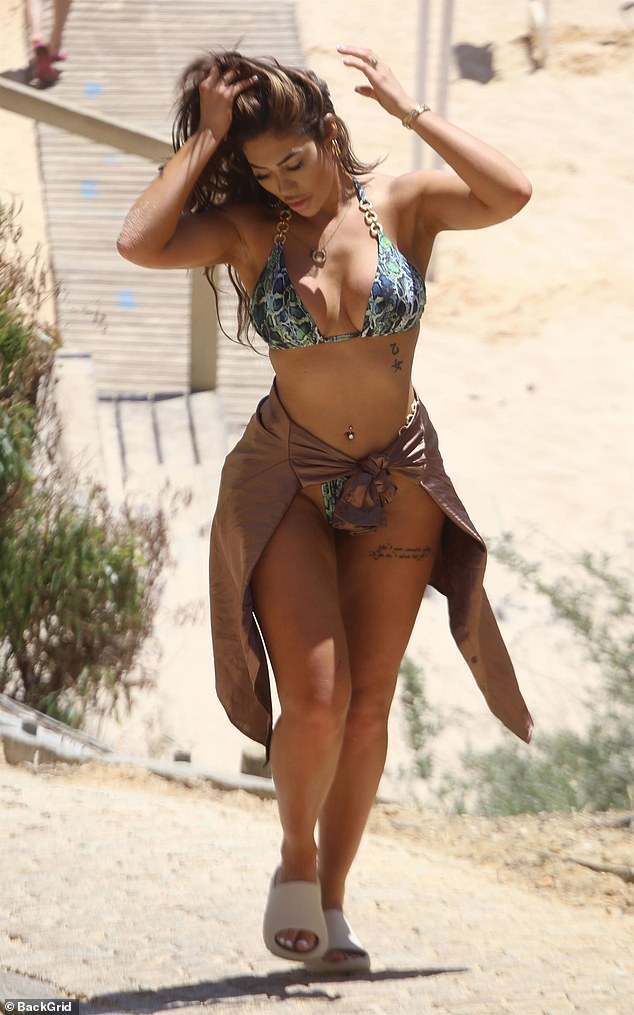 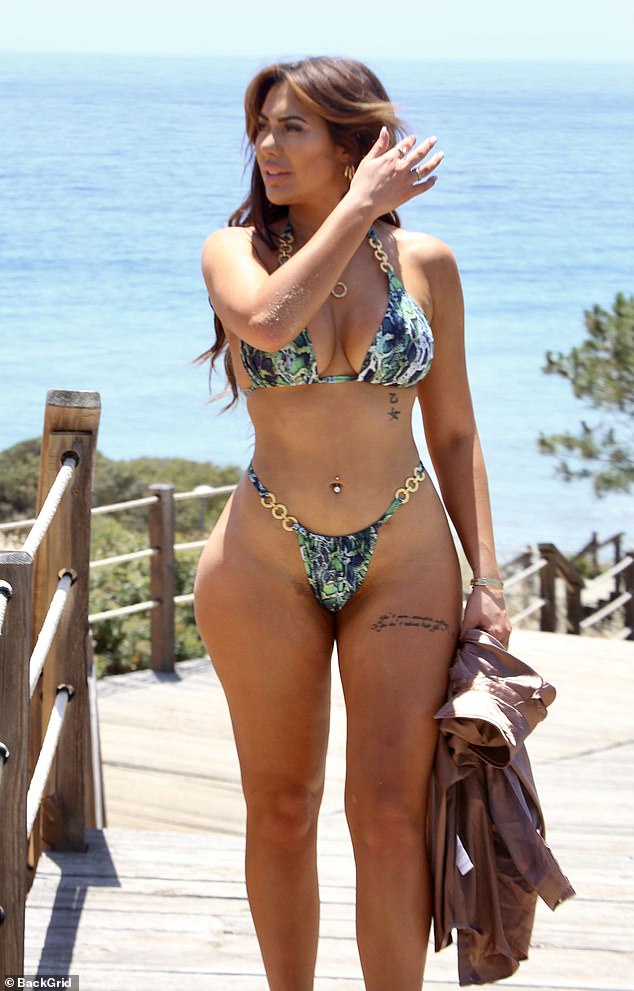 Killer curves: She exuded confidence as she strutted around the beach in Portugal 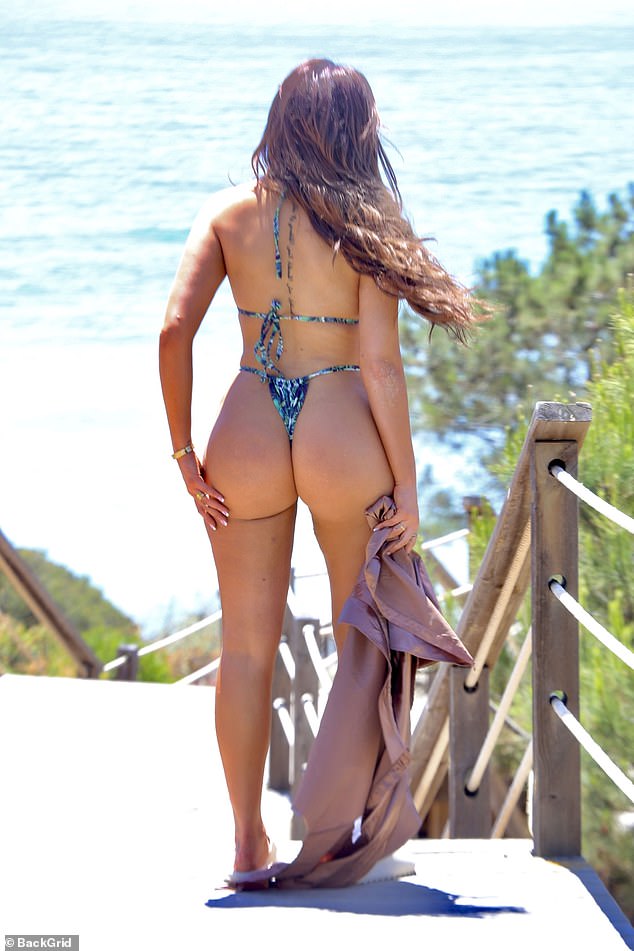 Soaking up the views: Chloe paused to look out towards the water while holding onto a jacket

Charlotte Crosby penned on the post: ‘Right confusion is high right now if your gunna get a boyfriend can you please watsapp me and tell me all about it.’ (sic)

Meanwhile Sophie Kasaei, who is also staying in Portugal with Chloe, wrote: ‘Hahahahahahahahaha how many lads can 1 gal be in love with.’ (sic)

Owen also declared his feelings as he shared a video of Chloe playing around with a vacuum cleaner in a hotel lobby as he wrote: ‘Love of my life’.

Chloe is believed to have been single for more than a year following a turbulent relationship with Sam Gowland which began in 2017.

The on-and-off couple parted ways for good in February 2020. 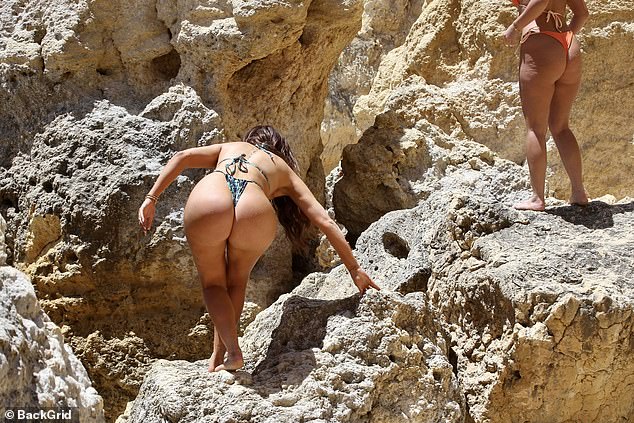 Exploring: The pals enjoyed a spot of rock climbing while on the beach during the weekend 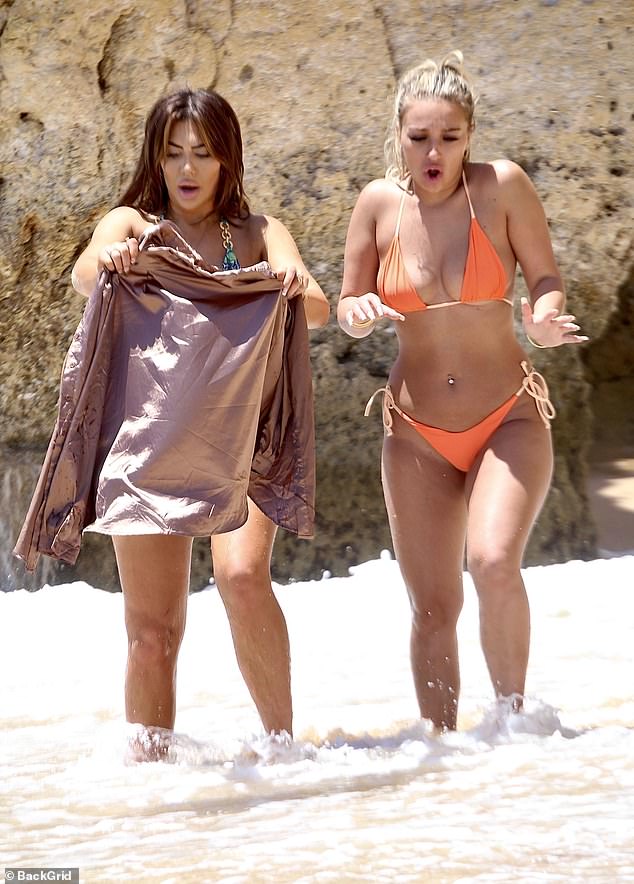 Bit nippy? Chloe and Bethan didn’t seem too impressed with the chilly water as they dipped their feet in during the walk

Since then, the reality star has been embracing the single life and dating, having appeared on the 2020 series of Celebs Go Dating.

She built a connection with Kieran Bishop and they reportedly spent time together when they left the show’s mansion. However, the alleged romance didn’t last long as Chloe failed to confirm they were ever dating.

She even shared a series of flirty exchanges with her Celebs Go Dating co-star Wayne Lineker, 59, who sent fans wild when he posted a fake engagement photo.

Appearing on FUBAR Radio with host TOWIE’s Bobby Norris in May, Wayne was asked who his celebrity crush was, responding: ‘Oh, that’s Chloe [Ferry] obviously!’ 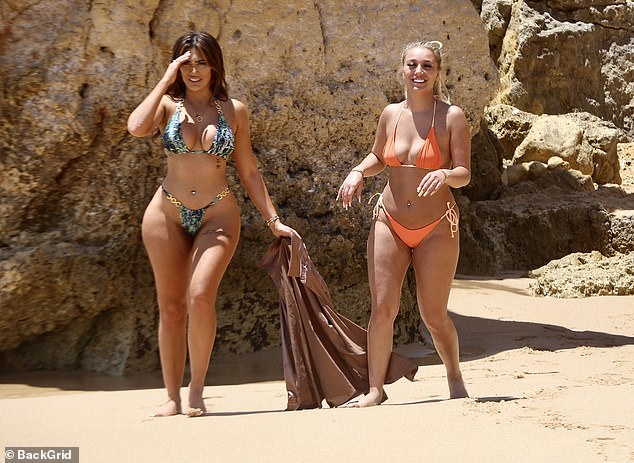 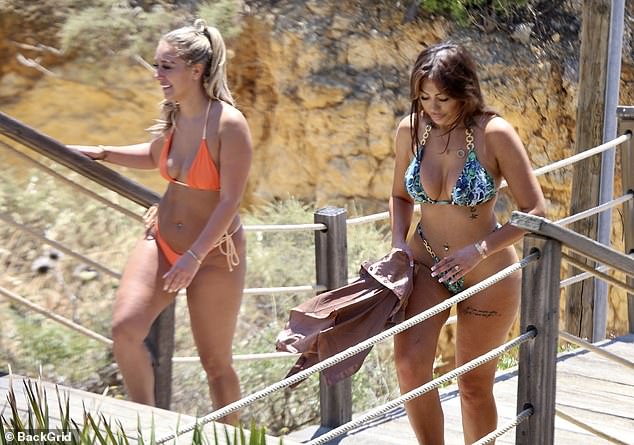 Having fun: They seemed to be in good spirits while walking and talking during the sun-soaked walk on the beach 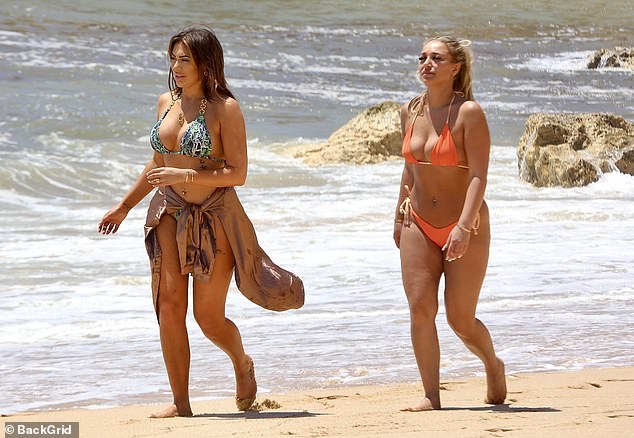 Layers: Chloe tied a brown jacket around her waist for some of the stroll

TOWIE star Bobby then said: ‘Miss Ferry. I saw all about this engagement! How did it come about Wayne?’

Club owner Wayne went on to explain: ‘Me and Chloe just have a laugh all the time. We’re in the mansion and she had a wedding ring.

‘She went, “Come on, Wayne, let’s pretend we’re getting married”. And we took all the pictures and everything and we didn’t end up doing it, we just forgot about it. 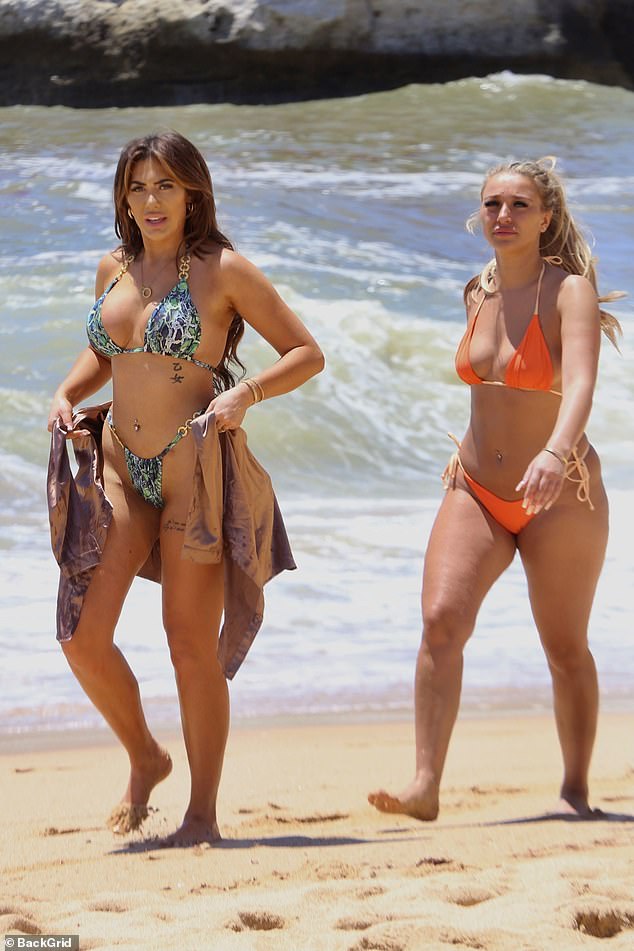 Beauty: The Geordie Shore star wore her long brunette extensions down and added a slick of makeup 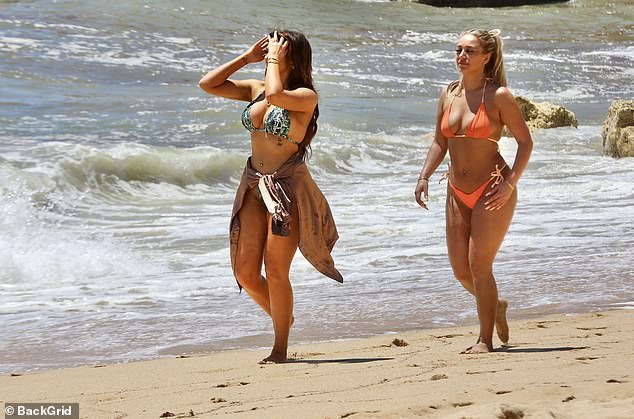 Relaxing: Portugal is one of the 12 countries currently on the UK’s ‘green list’ following the easing of lockdown restrictions in Britain last week 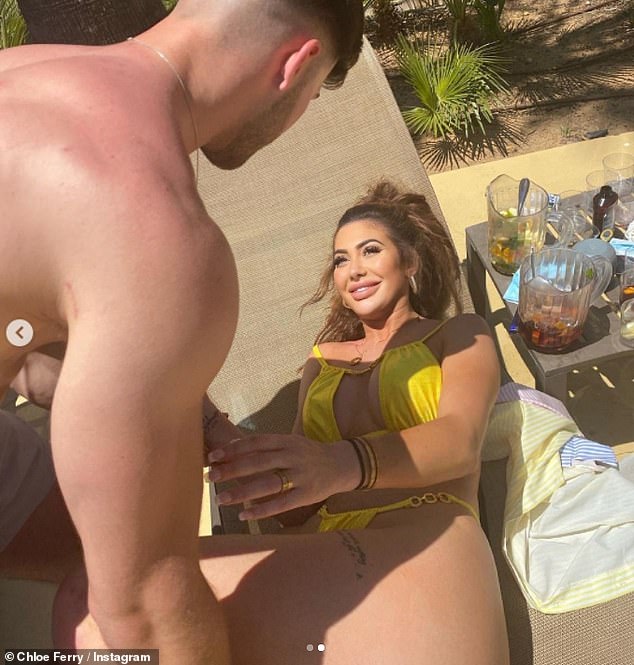 Sweet: It comes after Chloe put on an affectionate display with the Hollyoaks actor, 21, as they posed for a series of loved-up snaps during their Portugal getaway

Wow! She appeared to confirm they are set to tie the knot as she penned alongside the social media snaps: ‘Now I no what love feels like @_owenwarner,’ (sic) alongside a ring emoji

‘And she phoned me up last week. Because, I mean, we are seeing each other a little bit and having a bit of flirtatious banter and we’ll see what happens in the summer.

Owen, meanwhile, was previously in a relationship with his Hollyoaks co-star Stephanie Davis but the pair split in 2019. 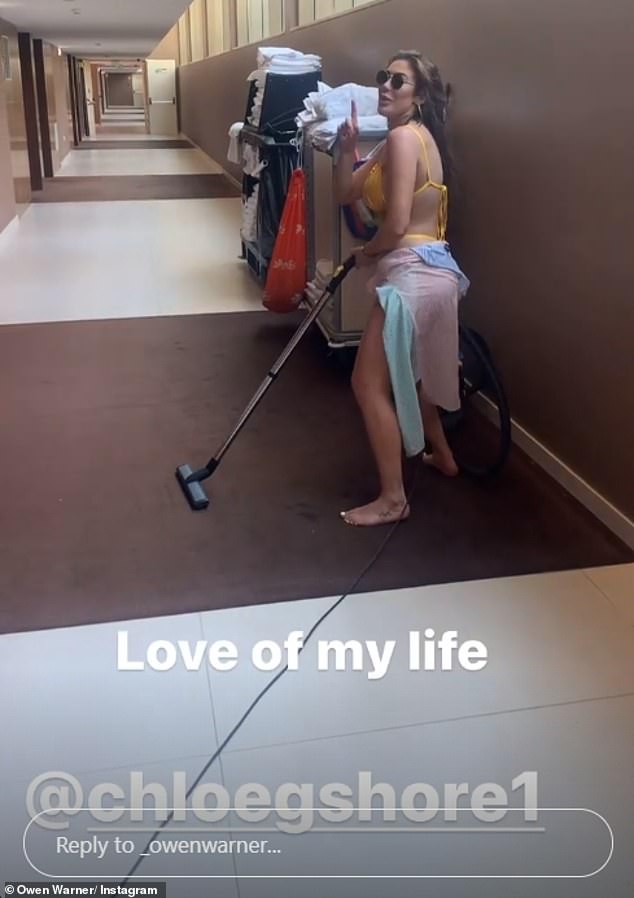 Couple? Owen also shared a video of Chloe playing around with a vacuum cleaner in a hotel corridor during their trip to Portugal as he wrote: ‘Love of my life’