After dropping down her 5-year-old daughter’s first baby tooth to the sink, the wife of John Legend asks a plumber for help to take apart the drain pipes under the countertop sink.

AceShowbiz –Chrissy Teigen has had a small parental mishap. In a video she shared on her social media account, the wife of John Legend admitted to feeling “so sad” after “promptly” losing her daughter Luna’s first baby tooth.

The “Chrissy’s Court” star took to her Instagram Story on Monday, December 13 to reveal that her 5-year-old daughter Luna had her first-ever baby tooth fall out and that she then almost immediately lost it. “Luna lost her first tooth and the tooth fairy PROMPTLY dropped it down the sink,” she captioned a video of a plumber taking apart the drain pipes under the marble countertop sink.

While she was upset over the accident, Chrissy found a ray of hope when the plumber busted out a camera to get a better look down the pipe. “Oh s**t we found it on the camera!” the mom of two wrote alongside a black-and-white photo of what appeared to be an inaccessible part of her home. She added, “Praise lord I was so sad.”

Chrissy helpfully circled the baby tooth in red in the photo, although it’s still nearly impossible to actually see. However, she didn’t reveal whether or not the plumber was able to pick up Luna’s first baby tooth. 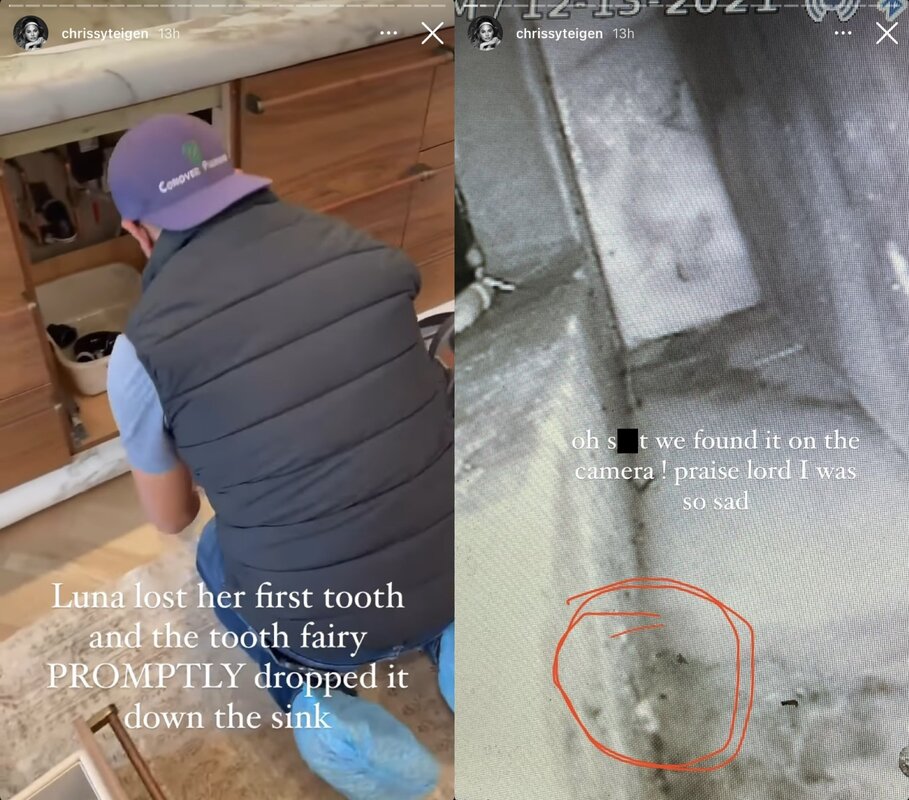 Chrissy Teigen revealed that she dropped her daughter Luna’s first baby tooth to the sink.

That wasn’t the only parenting drama Chrissy has been experiencing lately. Recently, the model was under fire for posting a selfie of herself taking a bath with Luna and her 3-year-old son Miles. In the photo, she had on a full face of makeup and flashed a wide, toothy grin as she dipped herself in the bathtub with her kids. “Not pictured: endless bickering,” she captioned her post.

In the comment section, social media users debated over whether Chrissy’s kid-friendly bath was appropriate or not. One person wrote, “Nope! Not appropriate in front of your son!” Others questioned why she would make the photo public. A separate user commented, “Some aspects of your life you should keep to yourself, Chrissy,” while another person added, “Not everything is for the world to see. Smh.”

In the meantime, some of Chrissy’s fans defended her. “Being naked isn’t sexual unless you do something sexual while naked,” one person argued. “If you think that boy is gonna look at his mom’s naked body and think sexual thoughts then that says more about your depravity than it does anything else. The naked body is natural. Not everything is about sex.”

“Haters gonna be after you for this pic! Which makes me wonder that they are the problem. I see this and all I see is love and the fond memories and bonding you have with your kids,” a second added. Meanwhile, a third simply wrote, “Photos of real life! Love it.”