‘She made broken look beautiful’: Christine McGuinness is a vision in breathtaking red gown as she poses up a storm for powerful new shoot

Christine McGuinness has shared a breathtaking photo of herself posing up a storm in a flowing red dress on Instagram.

The model, 32, looked sensational in the photo, taken by The Style Shooters, with her gown’s impressive train blowing in the wind while sprawling moorland loomed in the background.

Christine also shared a powerful message alongside the snap, captioning her social media post: ‘She made broken look beautiful and strong look invincible. She walked with the Universe on her shoulders and made it look like a pair of wings.’ 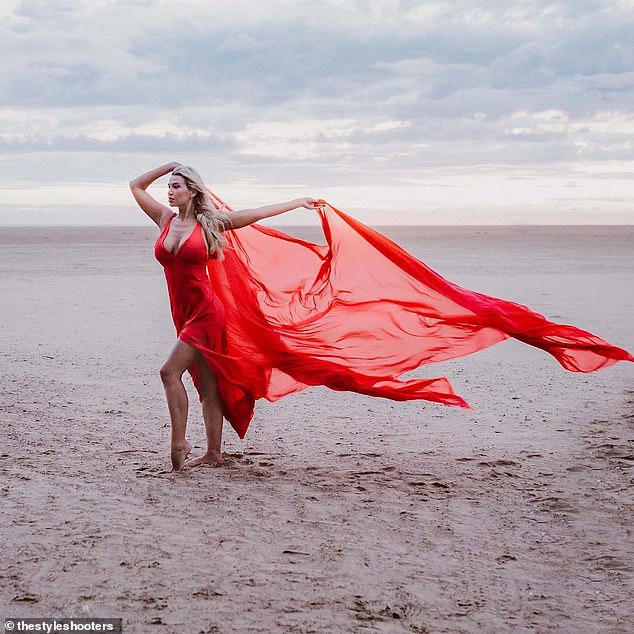 Stunning: Christine McGuinness, 32, has shared a breathtaking photo of herself posing up a storm in a flowing red dress on Instagram

The blonde beauty wore her hair loose for the shoot, with her glossy tresses blowing in the wind.

Pointing her toe in the sand, Christine raised her right arm up to the back of the head and held onto her dress’ floaty train in her left hand.

It comes after Christine assured fans her mother is ‘doing incredibly well’ having completed her breast cancer treatment.

Christine captioned the photo: ‘She made broken look beautiful and strong look invincible. She walked with the Universe on her shoulders and made it look like a pair of wings’

Taking to Instagram and posting a snap of her cuddling her beloved parent on Thursday, she penned the following note for her followers: ‘Ma. ”Always remember you are braver than you believe, stronger than you seem, smarter than you think and loved more than you know”.’

‘So many of you ask about my mum, she is doing amazingly well, I’m so proud of her.

‘Chemotherapy and radiotherapy is all done now it’s time for her to enjoy life!’

The lingerie model looked radiant in a summer dress, as did her mother, as they stood outside in the bright June weather, both wearing shades.

Her mother had opted to wear a wig following chemo, but is sporting natural locks two months after completing her treatment.

In March, she took to Instagram to post a photo of her mum ringing the bell to signal the end of her treatment.

She also took to her stories to post a tearful message to her followers about it.

‘Hey everyone – I’m going to try and get through this without crying. I’m very, very happy, these are happy tears. It’s been a very emotional day today. My mum has just rang the bell.

‘This means she has completed her chemotherapy. She’s been having chemotherapy for six months. Ringing the bell means that she’s finished.

‘She’s honestly the most amazing, strongest, incredible woman I’ve ever met. She’s done it all with a smile on her face, even ringing the bell she’s laughing.

‘I’m trying to pull myself together. I’m so proud of her. She’s done chemo on her own! This is a huge, massive milestone to get up and ring that bell. She’s laughed through it and she’s absolutely amazing.

‘Sending lots of love to anyone who’s fighting cancer right now and any family members it might be affecting. 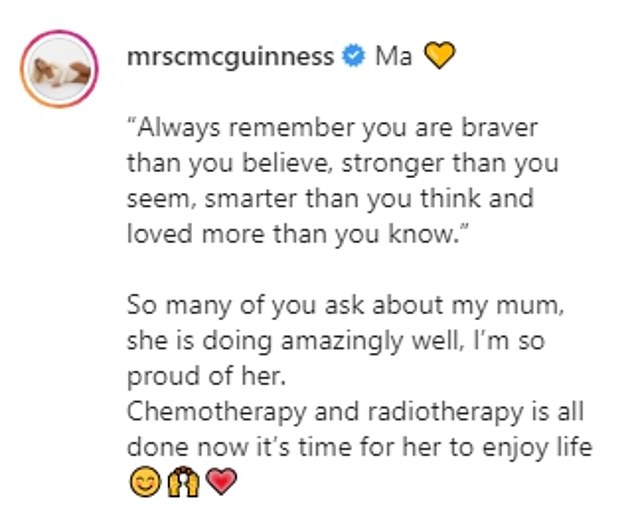 Taking to Instagram and posting a snap of her cuddling her beloved parent, she penned the following note for her followers: ‘Ma. “Always remember you are braver than you believe, stronger than you seem, smarter than you think and loved more than you know”‘

‘I miss her so much – the kids miss her. We haven’t seen her for eight months. She’s had her first vaccine, she gets the second in May, so hopefully we’ll be able to see her for summer. She’s just amazing!’

In February she explained to her followers that she was ‘beyond heartbroken’ that her mother has to isolate away from her friends and family.

Christine wrote: ‘I get messages everyday asking how my mum is doing thank you all for checking in!

‘but still laughing every time we speak on the phone just shows what an incredibly strong Ma I’ve got. 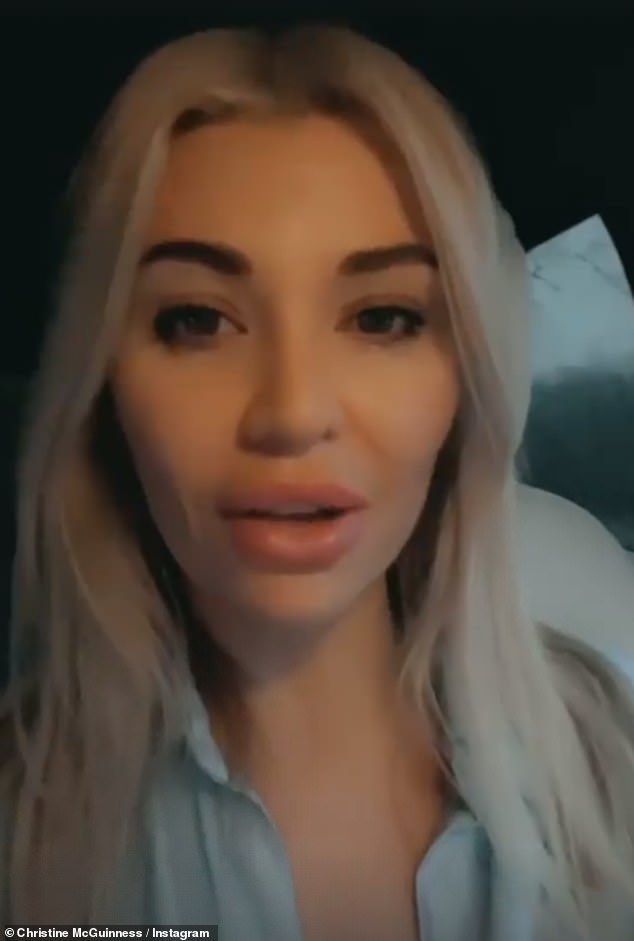 Good news: Christine celebrated the end of her mother’s chemotherapy treatment in March 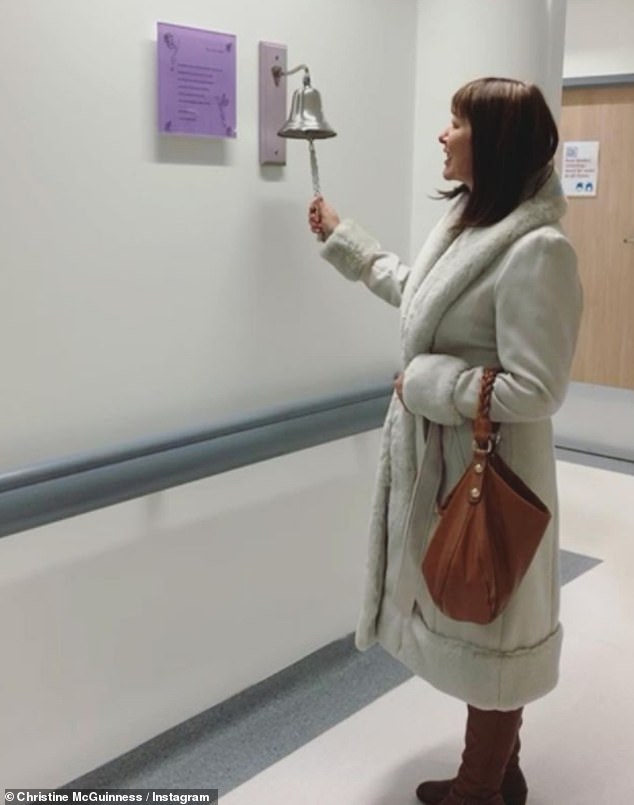 Milestone moment: The lingerie model took to Instagram to post a photo of her mum ringing the bell to signal the end of her treatment

‘Im so proud of you mum, I miss you everyday and can’t wait to see you again as soon as it is safe.’

Christine’s mum replied: ‘Aww lovely I miss you all so much looking forward to those priceless hugs and giggles’.

In January, Christine broke down in tears as she revealed her three children- twins Penelope and Leo, seven, and Felicity, four,- keep asking when ‘nanny will come and stay’.

Taking to her Instagram Story to issue an emotional update, the mother-of-three admitted: ‘Hey everyone, so I feel like I am all over the place today I feel like I should be so happy to move house. 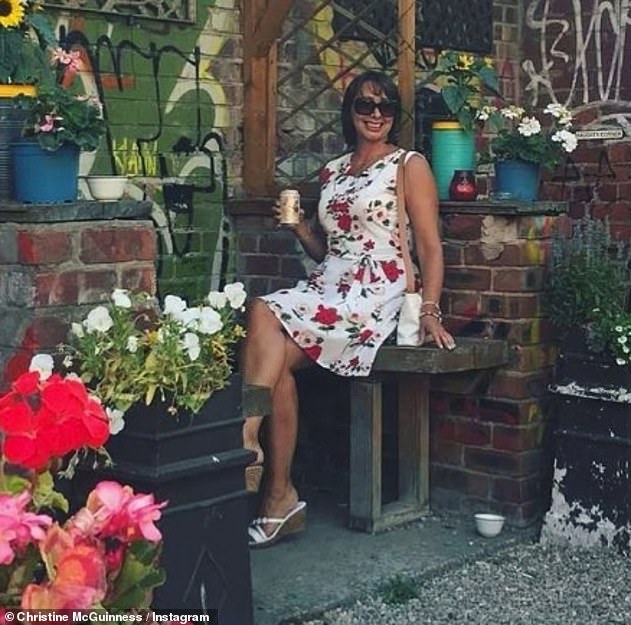 ‘It’s beyond heartbreaking’: Christine has spoken about her mum’s battle with breast cancer in the past

‘This is literally our dream home we’ve been building for years. We…’ Christine then broke down in tears.

She added: ‘I’d give it all to have my mum here. I feel I have got no one to talk to, I’m all over the place in the house, everyone is packing boxes. My head is just not there, my mum should be there with me.

‘She’s still in the hospital, I haven’t seen her for months. I probably won’t see her until next summer. The kids keep saying, ‘I wonder if nanny will come and stay.’

Christine also spoke about her mother’s cancer battle as she said: ‘She’s got a long, tough road ahead. 6 months on chemo then radiotherapy. Isolated, away from family and friends.

‘But we laugh every time we speak on the phone. My mum is an incredible strong woman.’ 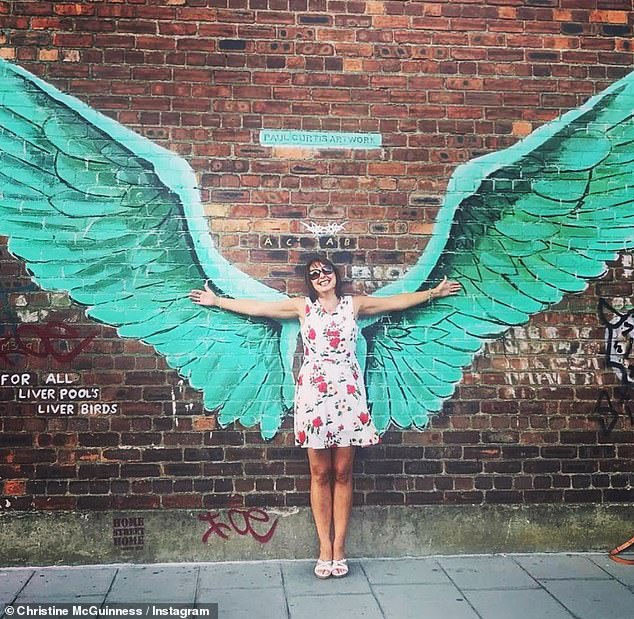 What is breast cancer?

Breast cancer develops from a cancerous cell which develops in the lining of a duct or lobule in one of the breasts.

When the breast cancer has spread into surrounding breast tissue it is called an ‘invasive’ breast cancer. Some people are diagnosed with ‘carcinoma in situ’, where no cancer cells have grown beyond the duct or lobule.

Most cases develop in women over the age of 50 but younger women are sometimes affected. Breast cancer can develop in men though this is rare.

Staging means how big the cancer is and whether it has spread. Stage 1 is the earliest stage and stage 4 means the cancer has spread to another part of the body.

The cancerous cells are graded from low, which means a slow growth, to high, which is fast growing. High grade cancers are more likely to come back after they have first been treated.

A cancerous tumour starts from one abnormal cell. The exact reason why a cell becomes cancerous is unclear. It is thought that something damages or alters certain genes in the cell. This makes the cell abnormal and multiply ‘out of control’.

Although breast cancer can develop for no apparent reason, there are some risk factors that can increase the chance of developing breast cancer, such as genetics.

What are the symptoms of breast cancer?

The usual first symptom is a painless lump in the breast, although most breast lumps are not cancerous and are fluid filled cysts, which are benign.

The first place that breast cancer usually spreads to is the lymph nodes in the armpit. If this occurs you will develop a swelling or lump in an armpit.

How is breast cancer diagnosed?

If you are confirmed to have breast cancer, further tests may be needed to assess if it has spread. For example, blood tests, an ultrasound scan of the liver or a chest x-ray.

How is breast cancer treated?

Treatment options which may be considered include surgery, chemotherapy, radiotherapy and hormone treatment. Often a combination of two or more of these treatments are used.

How successful is treatment?

The outlook is best in those who are diagnosed when the cancer is still small, and has not spread. Surgical removal of a tumour in an early stage may then give a good chance of cure.

The routine mammography offered to women between the ages of 50 and 70 mean more breast cancers are being diagnosed and treated at an early stage.