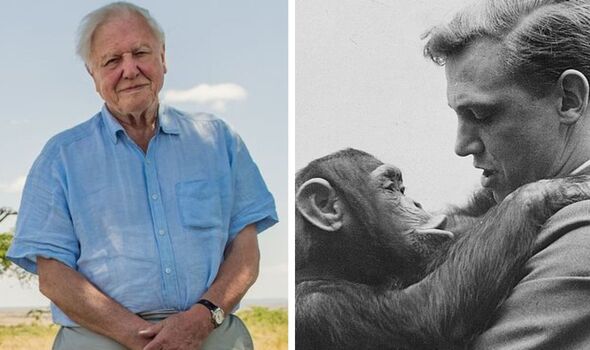 David Attenborough first joined the channel in his 20s, after a degree at Cambridge University and a short stint working for a publishing house – and he has revealed that “internal politics” soon led him to being offered the chance to pursue a career in Africa. Reflecting on spending more than seven decades in television, the 96-year-old said that at the time, being posted to the continent had suited him “down to the ground”.

David, who has spoken earnestly about climate change and the impact of air travel on carbon emissions, is now presenting a show set in the UK, called Wild Isles.

While preparing to promote the new series, he admitted that creating a show about British wildlife is something he’d always wanted to do.

However, his career had been primarily in Africa before, something which he describes as “internal politics”.

When he first joined the BBC back in 1952, television had been “restricted to London only”, but was rapidly expanding.

“Bristol had a Natural History Unit on the radio but it didn’t have television,” he recalled in a new interview with Chris Packham for Winterwatch.

He had a meeting with show bosses who stated that they wanted to focus on British natural history and decided to post him overseas.

“They said: ‘Tell you what… you can do all this stuff in Africa’ and I said, ‘That suits me down to the ground,'” he explained.

To describe David as a frequent flyer in the years that followed would be a huge understatement.

It has since been estimated that he has travelled 1.9 million miles by air over the course of his career – the equivalent of flying around the world 763 times.

He has made trips to at least 94 different countries, starting back in the days when air travel had scarcely even been considered by the average person.

David added proudly during the new interview that he believes his shows sparked off an “awareness of the natural world” which is unparalleled anywhere else on the planet.

However, his travelling days now seem to be – for the most part – over.

During the pandemic, he admitted that he had come to dread the prospect of getting on yet another aeroplane.

“I was finding my heart was sinking deeper and deeper into my boots every time I walked up into an aircraft,” he admitted.

The producer and presenter told Radio Times: “It didn’t make my heart lift with pleasure.”

He has attributed these feelings to his age, as he is due to hit the milestone of 100 years on earth in just four years time.

Meanwhile, to film the then-legendary Life of Birds documentary series back in 1998, he travelled a mammoth 256,000 miles across 42 countries for those shows alone.

He believes his huge tally of flights was justified at the time, but he has now massively scaled down, while there is the added concern of elevated global warming.

David warned: “I don’t think people should fly just for the hell of it [and] the BBC would be absurd to spend money on flights that are not essential or important.”

To watch David’s full interview with Winterwatch tune into the show on BBC Two and iPlayer at 8pm on January 26 and 27.

Meanwhile, Wild Isles airs on BBC One and iPlayer this spring.