Look out, Brooklyn! David Beckham shows off his photography skills as he models his Miami-inspired sunglasses range in lockdown friendly selfie shoot

His son Brooklyn is a keen photographer – but David Beckham gave him a run for his money on Monday when he promoted his sunglasses range.

David, 45, cut a handsome figure as he modeled shades from his own eyewear brand for the spring/summer 2021 campaign and took the pictures himself in a very lockdown-friendly shoot.

The former professional footballer modelled several looks from the new David Beckham Eyewear collection which is inspired by his second home, Miami. 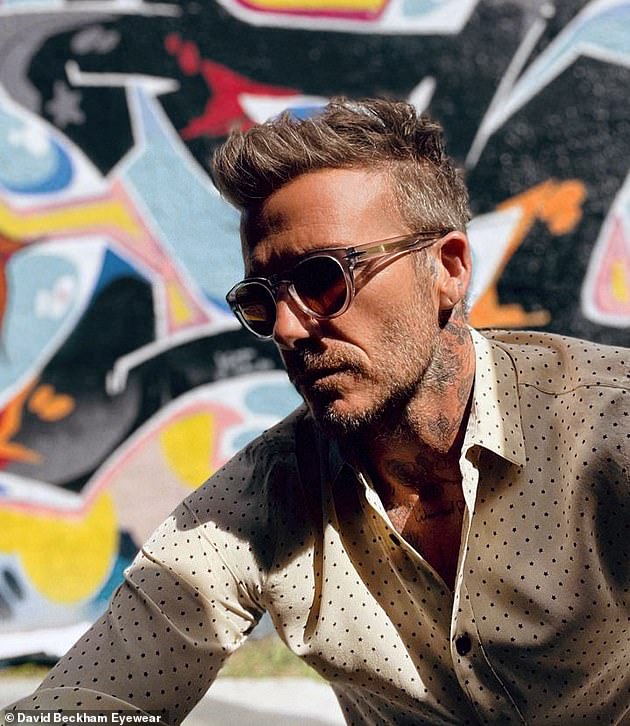 Look out Brooklyn! David Beckham showed off his photography skills when he modelled his Miami-inspired sunglasses range in a lockdown friendly selfie shoot 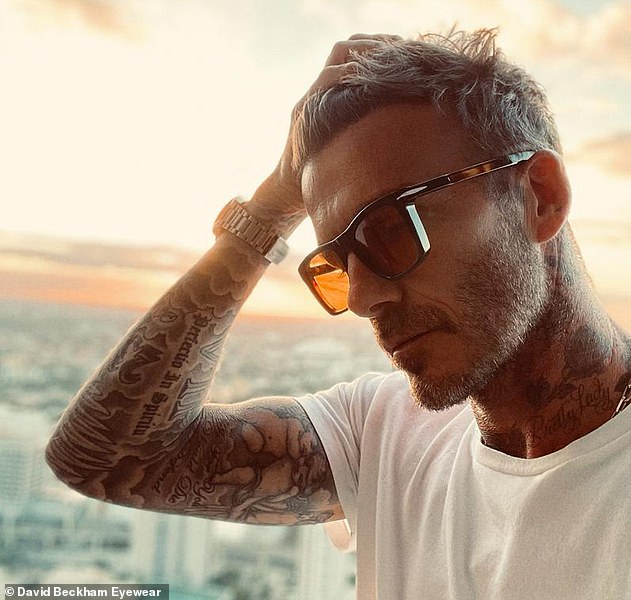 Vibrant: In a self-shot portrait, the father-of-four looked serious as he held one hand up to his head while wearing square-rimmed sunglasses with the sun setting in the background

David looked dapper in a pair of brown rimmed tinted shades from the brand as he lifted his hand to touch them.

He wore a cream jumper as he posed for the camera, working his best angles to flaunt his chiseled jawline.

In an accompanying video for the collection, David sets a sophisticated mood as he reads the newspaper while relaxing in the Miami sun. 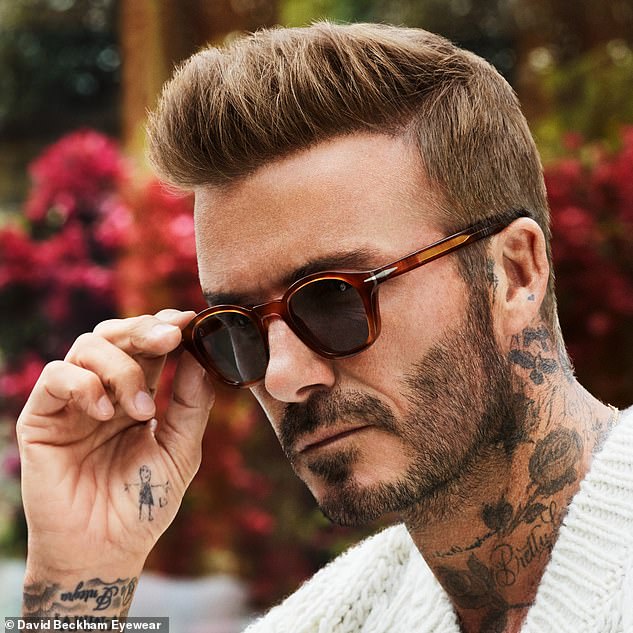 Dapper: David looked handsome in the range of images, flashing his many tattoos in the process 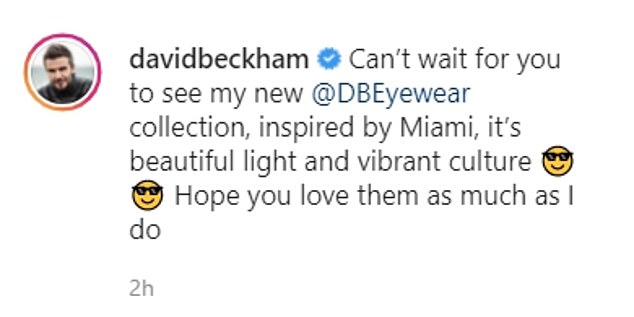 Inspired: David took to Instagram to reveal that the ‘beautiful light and vibrant culture’ of Miami served as the source of inspiration behind the new collection

He posed next to a wall covered in vibrant street art wearing a cream open-necked polka dot shirt and a pair of tan sunglasses.

In a second self-shot portrait, the father-of-four looked serious as he held one hand up to his head while wearing square-rimmed sunglasses with the sun setting in the background.

In an Instagram post to promote the new line, David referenced the ‘beautiful light and vibrant culture’ of the US city which served as the source of inspiration behind the new collection.

David captioned the post: ‘Can’t wait for you to see my new @DBEyewear collection, inspired by Miami, it’s beautiful light and vibrant culture… Hope you love them as much as I do.’ 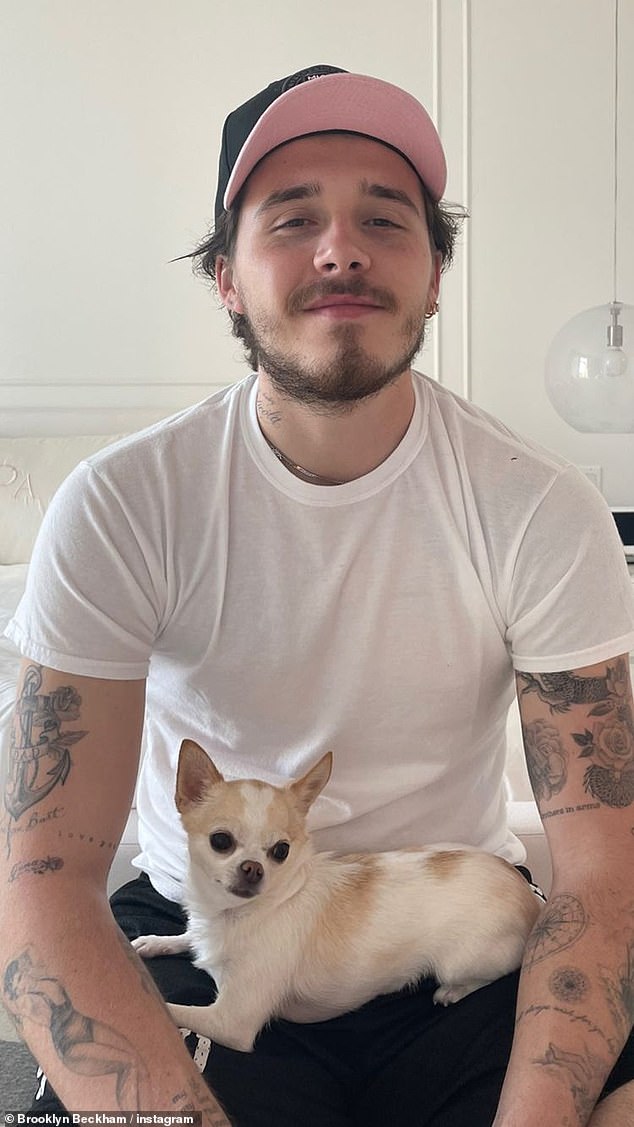 Taking his crown: David’s eldest son Brooklyn, 21, is usually the photographer of the family

Earlier in the week, David Beckham and his model son Romeo were busy showcasing his team’s new merchandise.

The sporting star sized up his teenage son, 18, as they stood face-to-face during a photoshoot wearing Inter Miami’s latest football accessories.

The father and son duo kept a serious face for the snap as they stared intensely into each other’s eyes in a series of pictures shared to Instagram on Saturday.

David sported a black hoodie with the Inter Miami logo on the front and pink writing down the sleeves, while Romeo opted for a short-sleeved top.

They pulled a number of serious poses for the camera before larking around and throwing their heads back laughing in another. 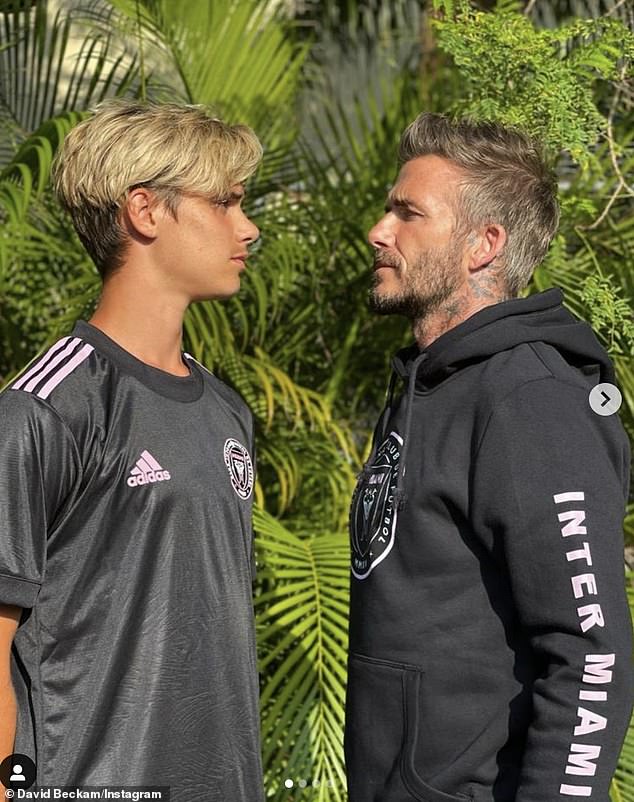 The football legend, who co-owns Inter Miami CF, proudly rocked the branded clothes next to his aspiring footballer son.

Romeo, who has previously modeled for Burberry, wore a baseball hat in a few of the pictures, which covered his blond hair.

David posted the shots to his Instagram and captioned the post: ‘Who wore it best? @intermiamicf’s new merch drop @romeobeckham.’

The Beckhams flew to Miami at the end of last year, but David has been hard at work since arriving in America.

The former footballer prepared to kick off training with the club ahead of the new Major League Soccer season.

Romeo seems to be following in his father’s footsteps as he trains with the Inter Miami academy players in Florida.

David and his wife Victoria are said to have embarked on the journey on Christmas Day, crossing the Atlantic in the safety of a private jet amid the COVID-19 pandemic.

They were joined by their offspring Romeo, 18, Cruz, 16, Harper, nine, and Brooklyn, 21, who is engaged to American actress Nicola Peltz, 25. 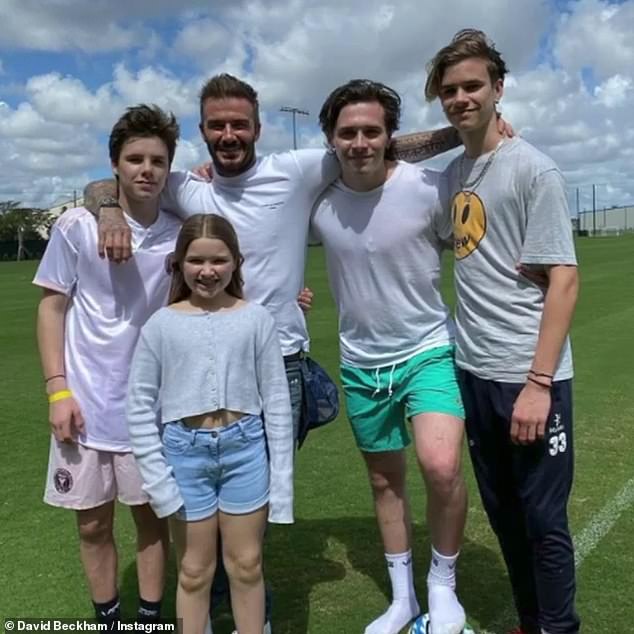 Florida sun: The Beckhams have been spending much of the current lockdown in Miami, where David co-owns the football club Inter Miami CF 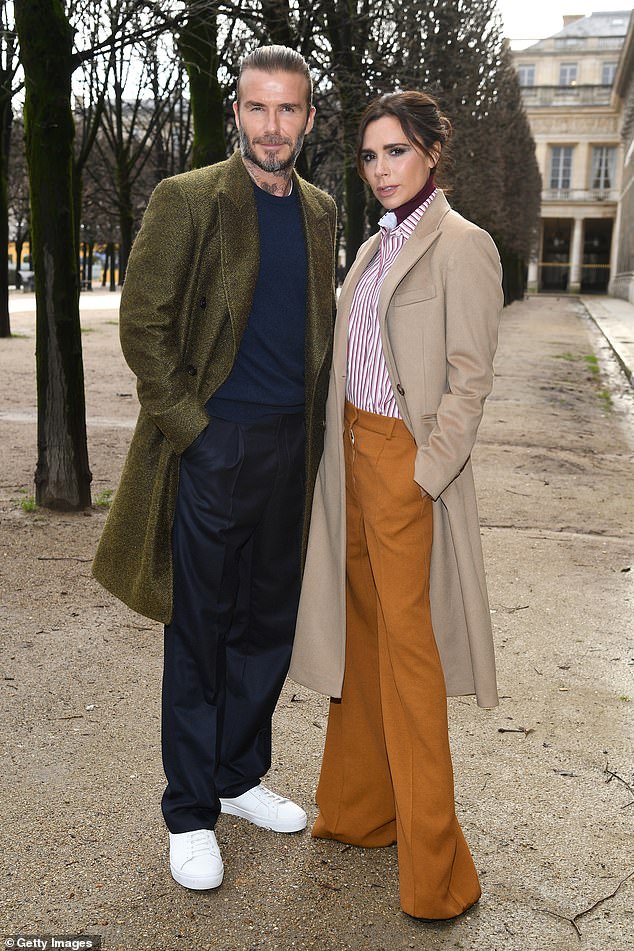