Denise Van Outen split from her partner of seven years in January after he was reportedly caught having phone sex with other women.

The commodities trader posted a photograph of his dinner of pie and mash at London’s Manze pie shop, which he shared alongside a cryptic caption where he said ‘there ain’t no pleasing you’. 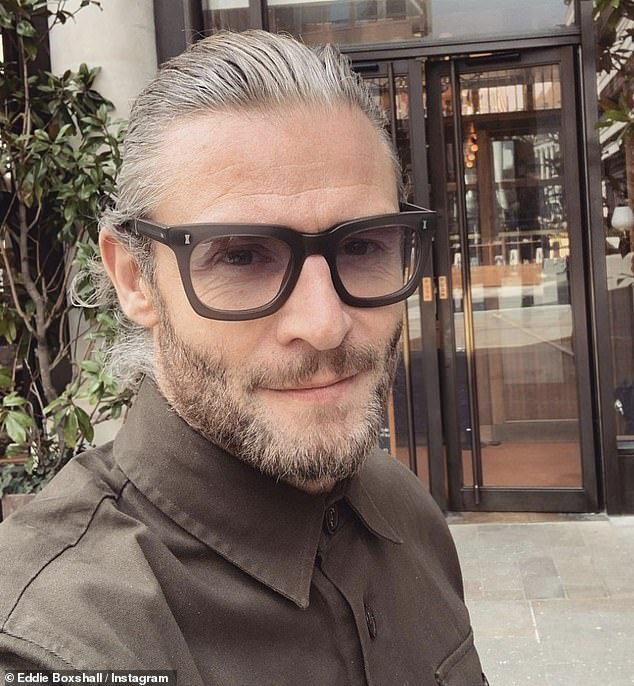 Hitting out: Eddie Boxshall took to his Instagram Stories on Monday to share a thinly veiled post appearing to criticise his presenter ex-girlfriend Denise Van Outen

He wrote: Everything I ever did was wrong, I should have known it all along. There ain’t no pleasing you! (but this pleases me!)’

But Eddie did not stop there as he went on to share another apparent dig at Denise as he shared an inspirational motto on his Instagram page.

The note read: ‘Time is too precious to live someone else’s definition of happiness and success.’

On Tuesday, Eddie also shared more cryptic quotes to his Instagram Stories as he posted letters to himself under the hashtag #notestoyourself. 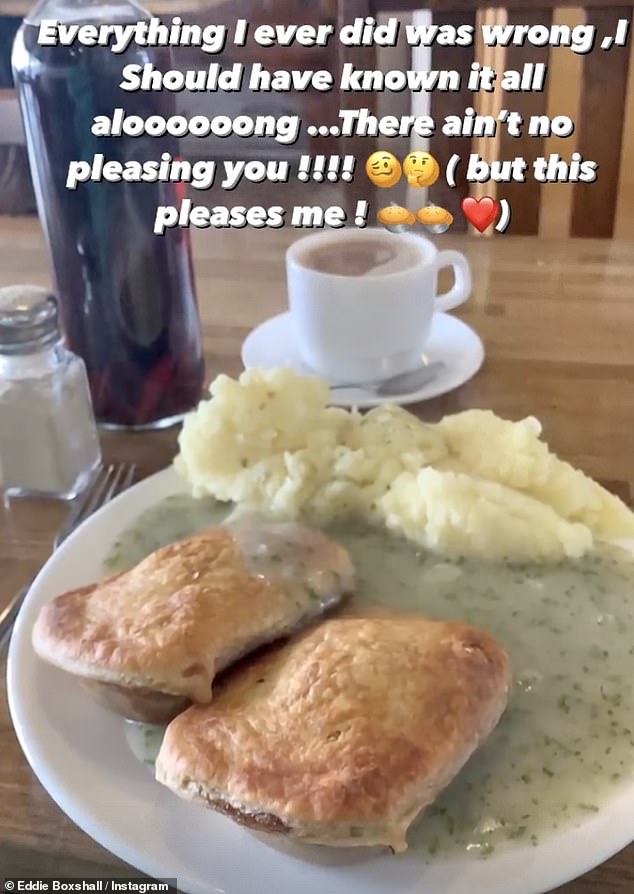 ‘Should have known it all along’: The trader posted a picture of his dinner of pie and mash, which he shared alongside a cryptic caption where he said ‘there ain’t no pleasing you’ 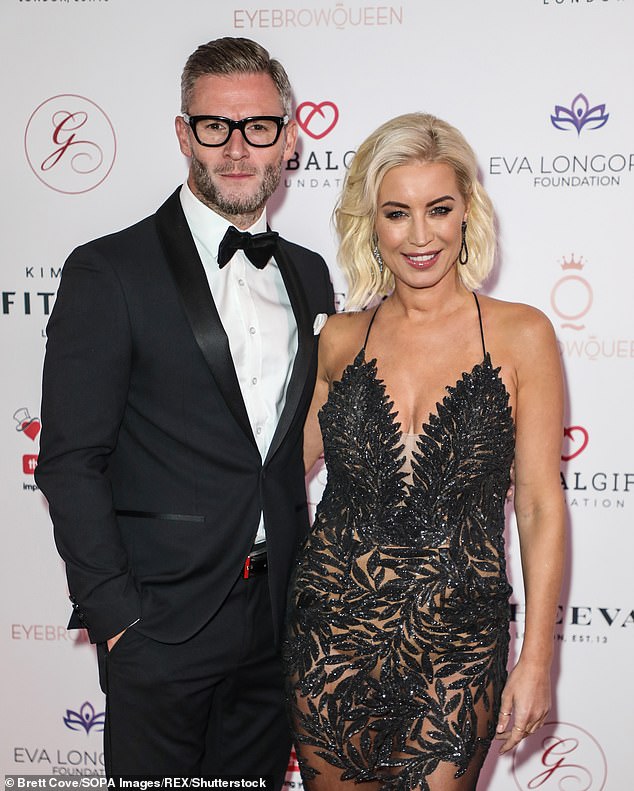 Break-up: Denise Van Outen split from her partner of seven years (pictured in October 2019) in January after he was reportedly caught having phone sex with other women

One read: ‘Dear me, I know you are scared but you can handle this. Love, me.’

A second said: ‘Dear me, Don’t fall back into your old patterns just because they’re familiar. Love, me.’

And a third added: ‘Dear me, Do what makes you truly f**king happy. Love, me.’

The Celebrity Gogglebox star’s comments are the latest in a slew of scathing Instagram posts following his break-up with Denise.

Last month, Eddie posted an expletive-filled message, declaring: ‘Unf**k yourself. Be who you were before all the stuff happened that dimmed your f**king shine.’ 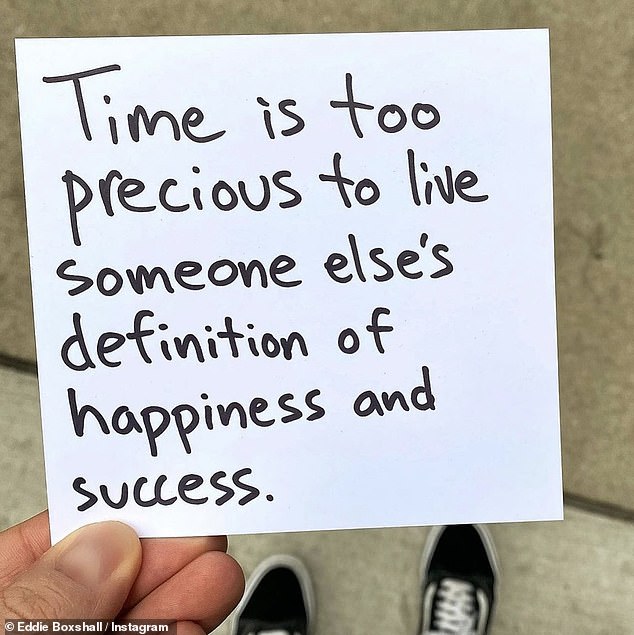 Cryptic: Eddie did not stop there as he went on to share another apparent dig at Denise as he shared an inspirational motto on his Instagram page 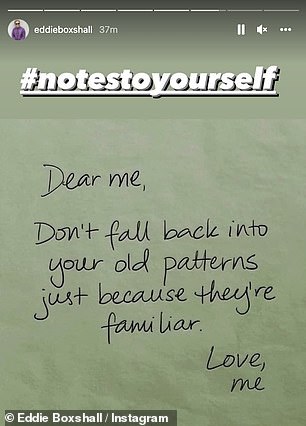 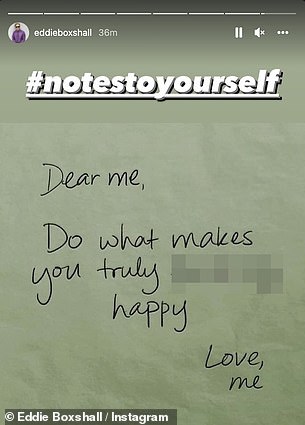 Criticism: On Tuesday, Eddie also shared more cryptic quotes to his Instagram Stories as he posted letters to himself under the hashtag #notestoyourself

While he also shared a number of cryptic quotes, seemingly in reference to Denise’s interview where she detailed their break-up.

Eddie shared his ‘thought of the day’: ‘Love is more important than money’, and also ‘people who live in glass houses should not throw stones’. He also took a snap of a neon light with the saying ‘let that s**t go’.

He recently confessed he’d lost over a stone in weight while battling stress and anxiety after their seven year relationship came to an end.

Denise recently revealed she caught Eddie flirting sexually with three women and described his behaviour as ‘disrespectful and devastatingly hurtful’.

She claimed that she found pictures and Instagram messages on Eddie’s iPad, detailing the ordeal in her new autobiography, A Bit Of Me: From Basildon To Broadway And Back. 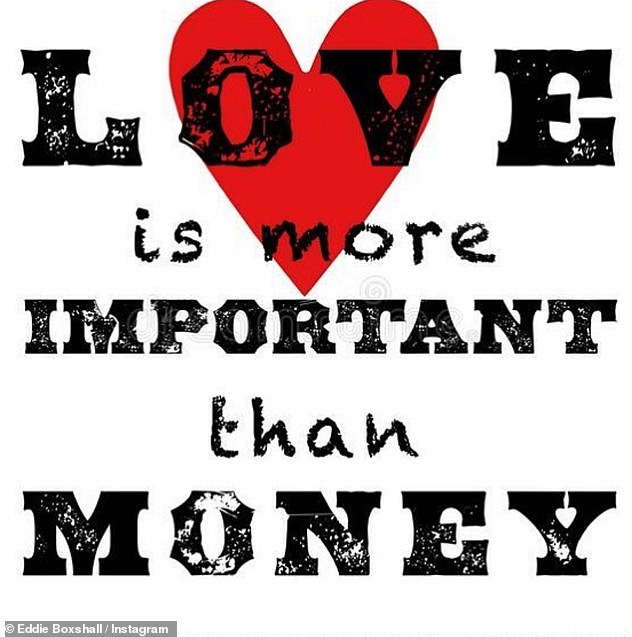 Exes: Last month, Eddie shared his ‘thought of the day’: ‘Love is more important than money’ in a thinly veiled swipe at his ex-girlfriend 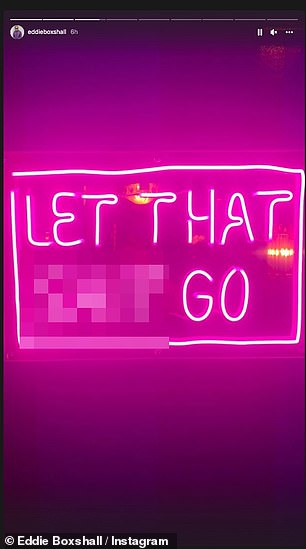 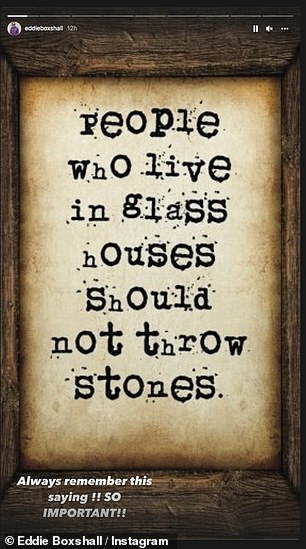 Time to move on? The Celebrity Gogglebox star’s comments are his latest in a flood scathing Instagram posts following his break-up with Denise

She said: ‘Among photos was a screenshot… of a woman’s breasts – and they definitely weren’t mine!

‘Also, there was a flirty text exchange between Eddie and this woman, which, of course, set off alarm bells.’

The star admitted the exchange happened in a week she had booked a Spanish holiday, explaining: ‘Eddie decided not to come to Spain because he didn’t feel well.

‘While sympathetic, I was slightly confused about why he couldn’t chill with me beside the pool but could still manage to go to the pub.’ 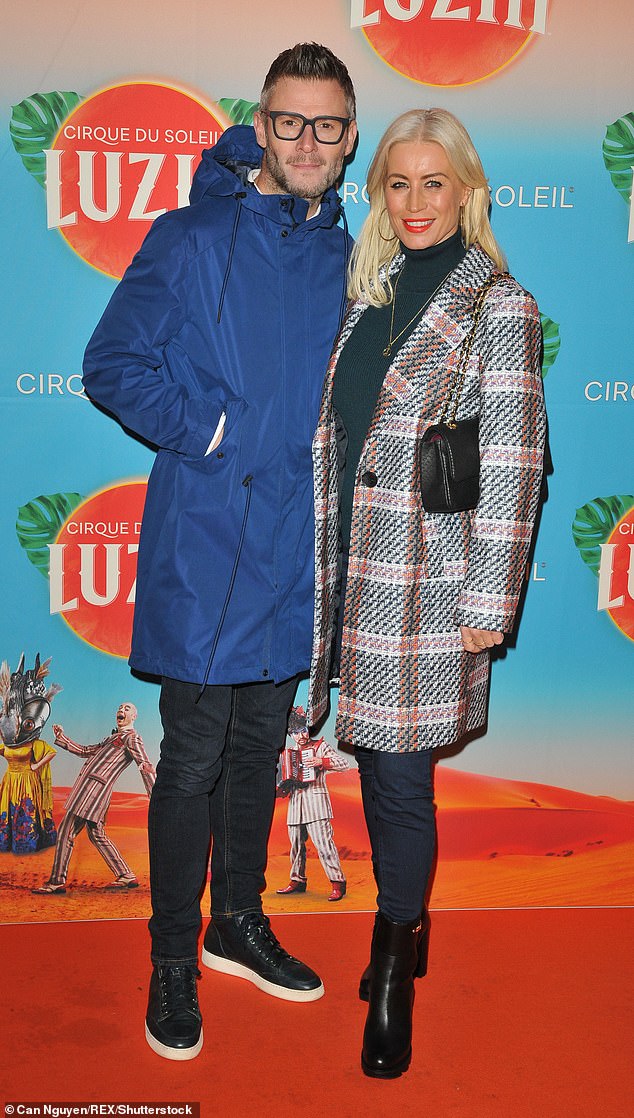 Cheating: Denise revealed she caught Eddie (pictured in January 2020) flirting sexually with three women and described his behaviour as ‘disrespectful and devastatingly hurtful’

Denise also discovered selfies of Eddie with a woman in a bar on a day he had told her he was in London for business.

She realised by looking at the outline of the woman’s chest she was not the same one in the first photos. She also found messages which suggested ‘phone sex’ with a third woman called Tracy.

Denise decided to contact Tracy and said: ‘They’d never met in person, but she said the conversations had become sexual in nature reasonably quickly – some of the stuff I found on the phone seemed to support that.’

She added: ‘To me, sexual chats and continued communication over a long period of time amount to cheating.

‘Especially when it’s done from a home I’d strived to build for us as a family. A home that Eddie found and I bought for us.

‘A home we’d only just moved into when it all started. It was disrespectful and devastatingly hurtful.’

Denise confronted Eddie about the women, but he denied doing anything wrong and she told him to leave.

The star, who has an eight-year-old daughter with ex-husband Lee Mead, insisted: ‘The thing I battled with most was that it wasn’t just one person, one mistake or drunken night. This was something that had gone on for more than three years. I felt betrayed.’

She ‘cried her heart out’ to her mother, adding: ‘I was in pain and shock. I’d thought we had the perfect life.

‘Any relationship has to be built on trust and once that’s gone, there’s no way forward. If I hadn’t found those pictures, I’d be planning a wedding right now. Instead, I’ve simply got to move on.’

But Denise has insisted there are ‘no hard feelings’ following the break-up and that she has managed to move forward. 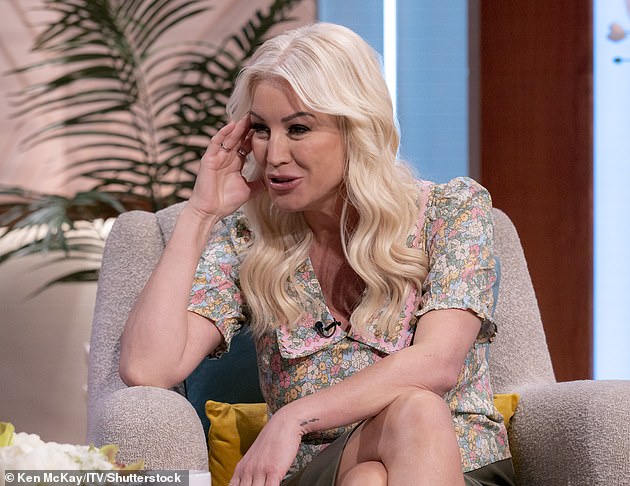 Moving on: But Denise has insisted there are ‘no hard feelings’ following the break-up and that she has managed to move forward

Speaking on a recent episode of Lorraine, she said: ‘I’m feeling really good now because I wasn’t in a good place, it was all a bit of a shock.

‘These things happen. I’m not the first person it’s happened to and I won’t be the last, sadly. But it’s life, isn’t it, Lorraine?

‘You just have to get on with it and there are no hard feelings on my side. It’s happened and you just accept it. I can’t change what’s happened.’

Addressing the break up for the first time last month, Denise explained she was ‘really proud’ of herself for knowing when to walk away.

She said on Radio 2: ‘The one thing I’m really proud of myself for is I do know when to walk away and I don’t like to be taken advantage of.

‘Sometimes it’s been to the detriment of my own career or in my own relationships, but I just feel like it’s really important as a woman to have self-worth and self-respect.

‘I’ve always tried to maintain that in anything that I do in life, generally. More so now as a mother because I feel like I’m a role model and I’ve got to set an example.’

Denise went on to the muse that she can see light at the end of the tunnel, noting: ‘The bad times are always followed by good times and that’s what I always look forward to.

‘I think you just ride the wave of the bad times knowing that eventually you will get to a good place.’ 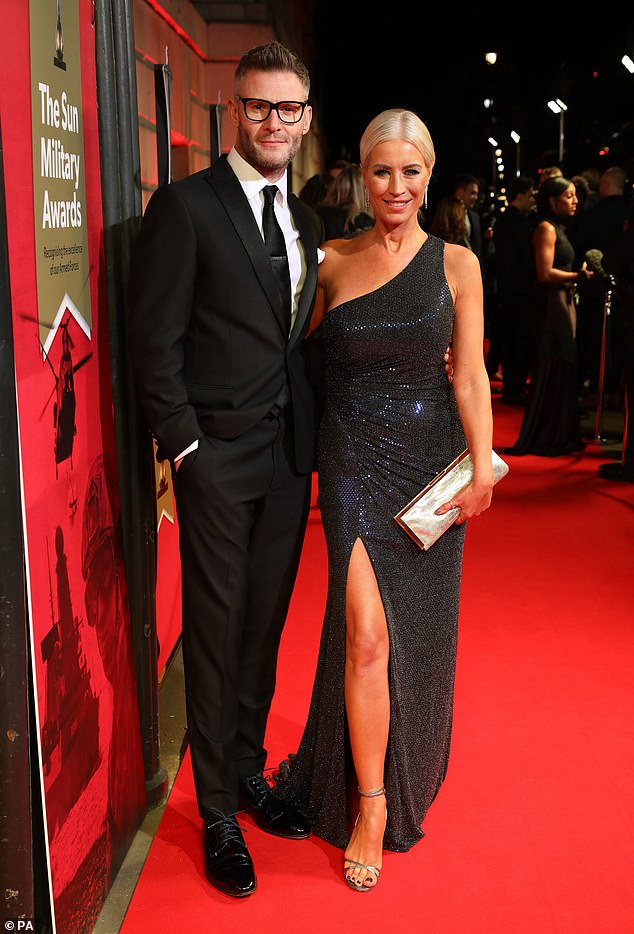 Crafty: Despite Eddie’s efforts to conceal his infidelities, Denise still found out when she was using his iPad and the messages came up (pictured February 2022)

According to The Sun, Denise asked Eddie to leave their home after discovering he had been swapping messages and calls with women he met online and hooking up with another on secret dates.

Confirming their split in an Instagram post, Denise wrote: ‘Over the past couple of months, there has been much speculation regarding my relationship with Eddie.

‘It saddens me to confirm that we are no longer a couple. I had to make the difficult decision not to continue in our relationship.

‘I will always treasure the good times we spent together, and the memories made. We ask that you please respect our privacy at this time, especially for our children.’