She’s been nominated in a whopping six categories at the 63rd Grammy Awards.

And Dua Lipa was sure to command attention as she walked the red carpet ahead of Sunday night’s event in Los Angeles.

The pop star, 25, flaunted her sensational figure in a sheer dress by Atelier Versace with a racy thigh-high split as well as a sparkling butterfly detailing across the chest. 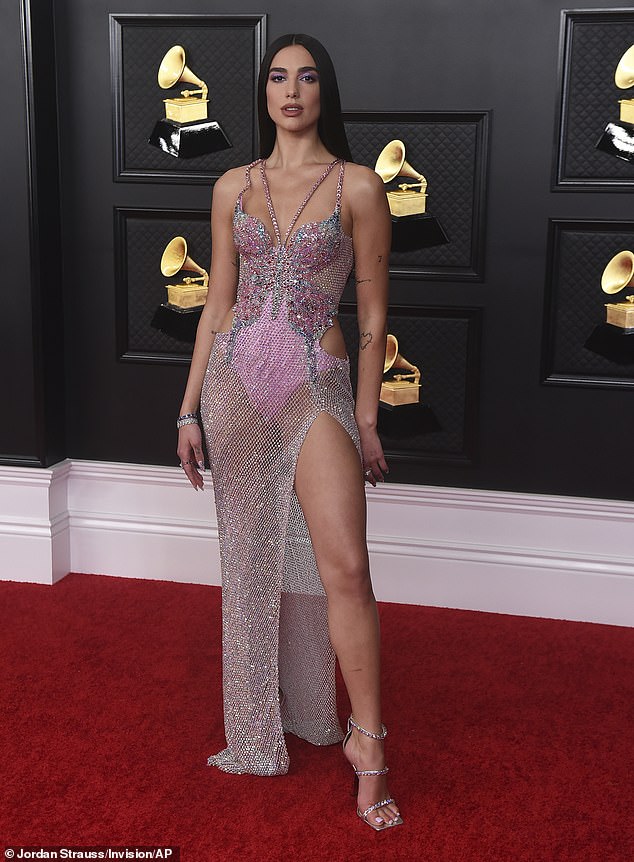 Sizzling: Dua Lipa was sure to command attention as she walked the red carpet at the Grammy Awards in Los Angeles on Sunday

Dua exuded confidence as she posed up a storm and showcased her enviable frame on the night.

She rocked her silver sheer dress which featured a multi-coloured butterfly detail across the front and perfectly complemented a pink bodysuit.

The beauty wore her long locks down and styled poker straight, tucking her tresses behind her ears to ensure all eyes were on her statement outfit.

Work it: The pop star, 25, flaunted her sensational figure in a sheer sequinned dress by Atelier Versace with a racy thigh-high split as well as a sparkling butterfly detailing across the chest

The star completed her look with a full face of makeup, including a touch of pink eyeshadow which matched the pink and purple tones of her ensemble.

Dua recently revealed that she’s overwhelmed to be up for six different accolades at the prestigious awards ceremony.

Speaking to the Mirror on Saturday, the singer said: ‘These things really only happen in your dreams… I’m hoping no one is going to wake me up and be like, “All right, time for school!”‘

The hitmaker is one of the most recognised artists at this year’s Grammys, beaten only by Beyoncé who has a whopping nine nominations. 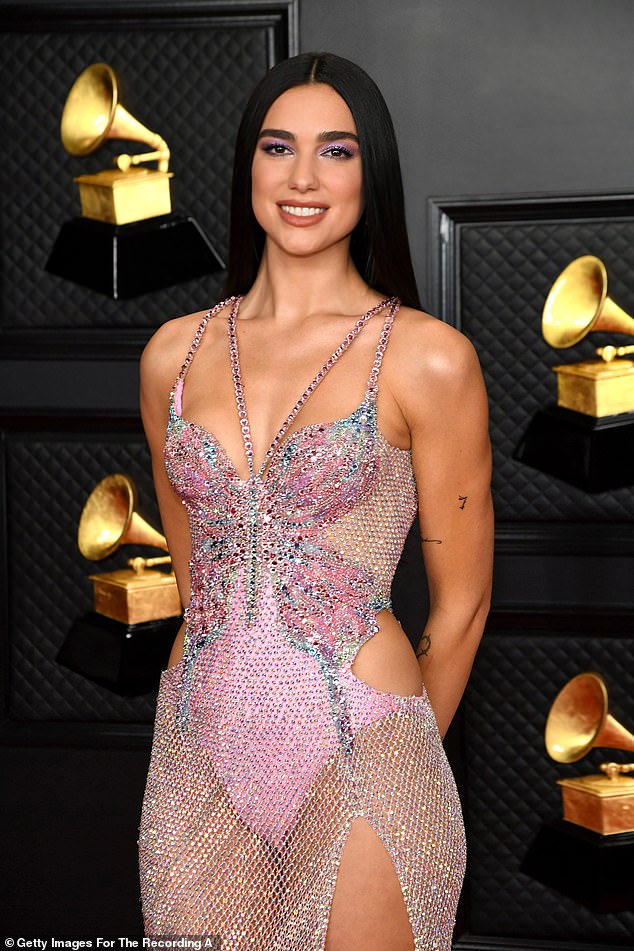 Glowing: Dua wore her long locks down and styled poker straight, ensuring all eyes were on her statement ensemble for the big night in music 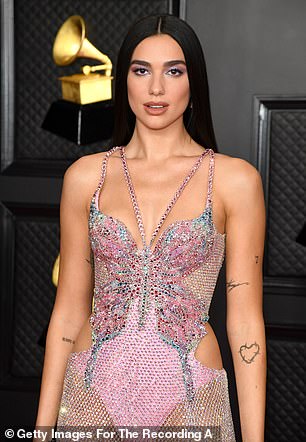 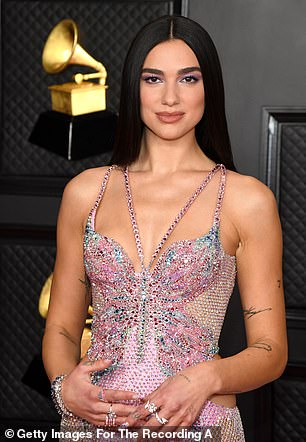 Beauty: The star completed her look with a full face of makeup, including a touch of pink eyeshadow which matched the pink and purple tones of her ensemble 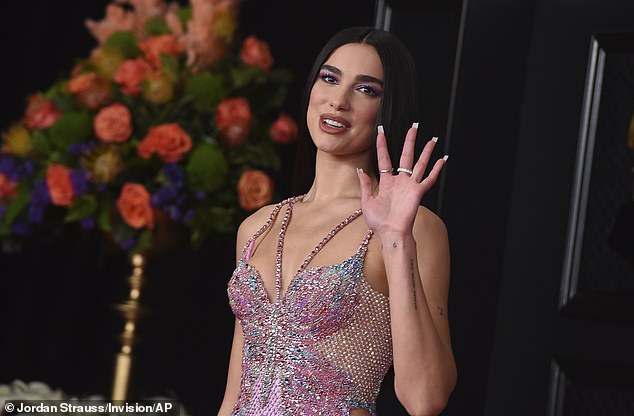 Big night: Dua is nominated in six categories and is also set to join the line-up of performers

Dua’s hit single Don’t Start Now is up for three awards: Record Of The Year, Song Of The Year and Best Pop Solo Performance.

She was also the firm favourite to win in her other nominated categories: Album Of The Year, Best Pop Vocal Album and Best Group Performance for her collaboration with J Balvin, Bad Bunny and Tainy on Un Dia (One Day).

Dua however was pipped to the post by Lady Gaga and Ariana Grande’s smash hit Rain On Me in the Best Group Performance category.

The singer revealed she felt overwhelmed and couldn’t believe the recognition she was receiving was happening in real life.

She said: ‘It’s bonkers, it’s mind-blowing, it’s amazing. These things really only happen in your dreams. 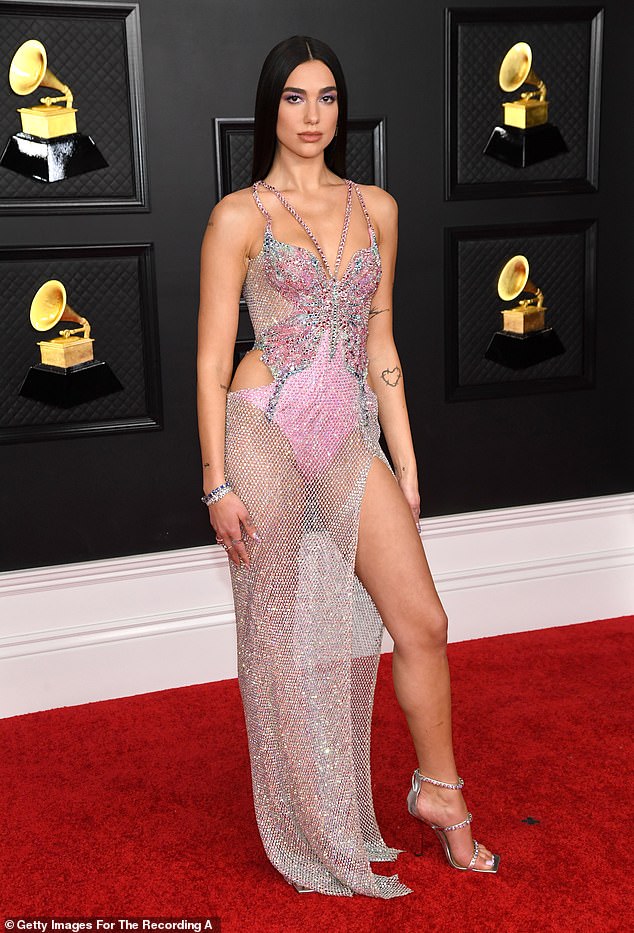 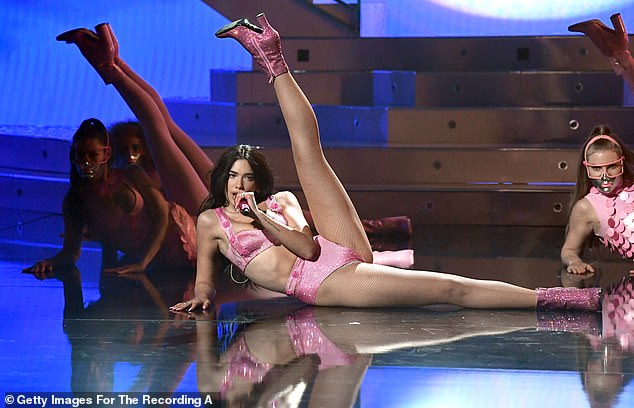 In her element: Dua took to the stage on Sunday in a tiny pink two-piece and matching boots 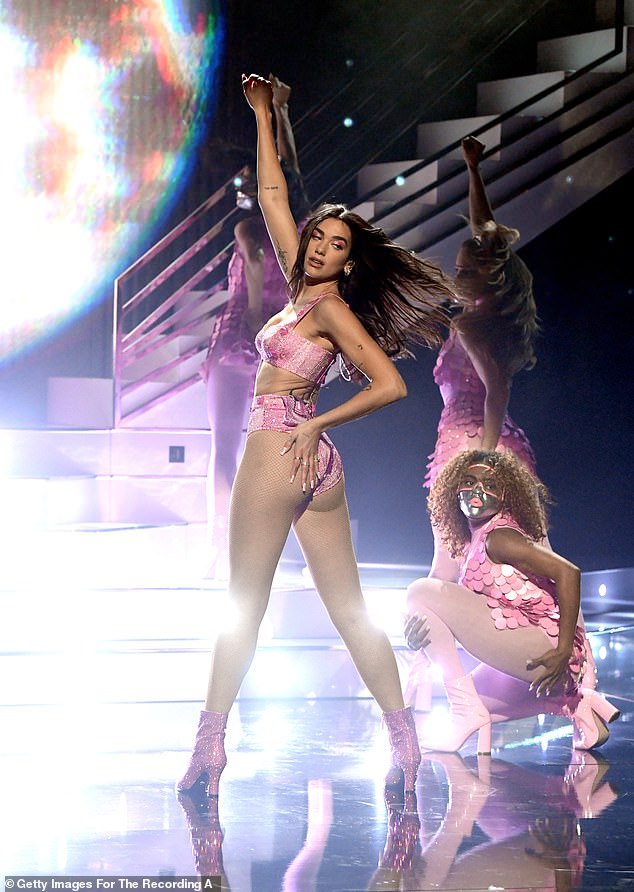 Work it: The hitmaker is one of the most nominated artists at this year’s Grammy Awards, with her featuring in six categories (pictured at the 61st Grammy Awards in 2019)

‘I’m hoping no one is going to wake me up and be like, “All right, time for school!”‘

And the pop star admitted the prestigious praise early in her career encouraged her to push herself further when working on her latest album Future Nostalgia.

She said: ‘I feel like winning Best New Artist almost just pushed me to work harder. I am like okay – I have to prove I deserve to be here.’ 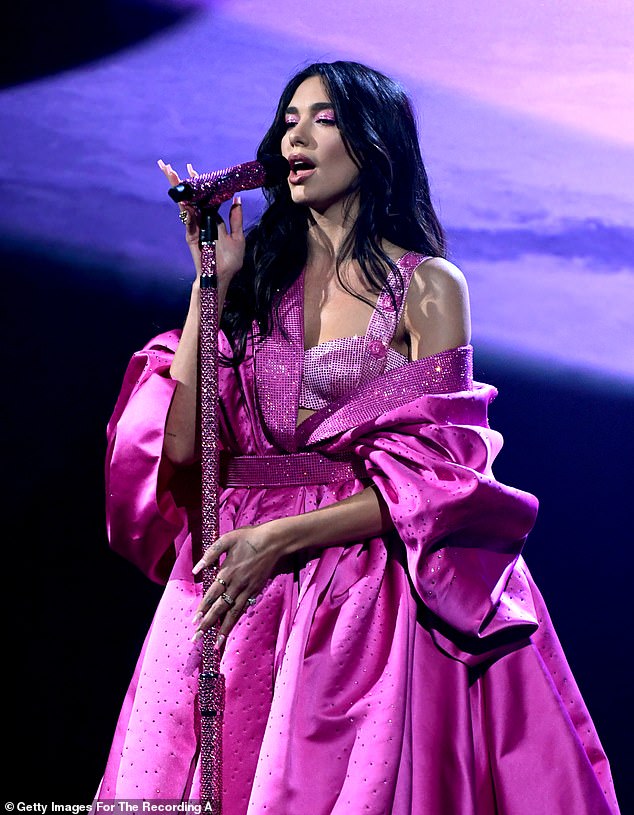 Incredible: She also slipped into a bright pink gown for her time on the stage

Record Of The Year

“Everything I Wanted” — Billie Eilish – WINNER 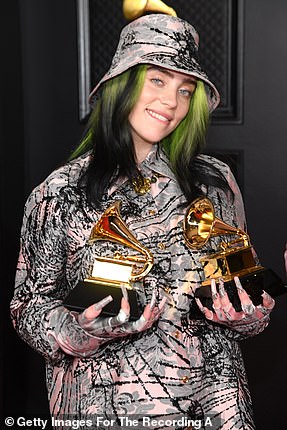 Double duty: Billie Eilish earned the top honor of the night, Record Of The Year, for Everything I Wanted

Album Of The Year 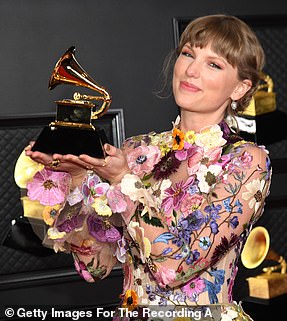 Incredible: Taylor Swift  became the the first female artist to win the Album Of The Year Grammy Award three times

Song Of The Year 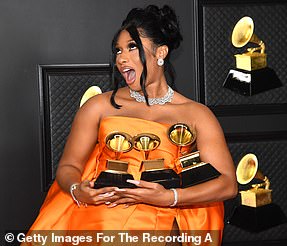 “The In-Between” — In This Moment

The New Abnormal — The Strokes – WINNER

“The Missing Link: How Gus Haenschen Got Us From Joplin to Jazz and Shaped the Music Business” — Colin Hancock, album notes writer (Various Artists) 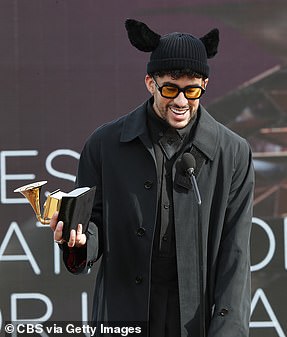 Epic: Bad Bunny – who was the most-streamed artist of 2020 – earned Best Latin Pop Or Urban Album for YHLQMDLG

Best Arrangement, Instrumental Or A Cappella

“Everything I Wanted” – Billie Eilish 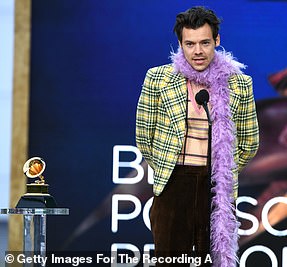 Winning the break-up? Taylor was bested by an ex as Harry Styles scored a surprise victory for Best Pop Performance

“Rain On Me” — Lady Gaga with Ariana Grande – WINNER

“Chronology of a Dream: Live At The Village Vanguard” — Jon Batiste

“It All Comes Back to Love” — Maxi Priest

“One World” — The Wailers

“Run to the Father” — Cody Carnes

All of My Best Friends” — Hillsong Young & Free

“Holy Water” — We the Kingdom 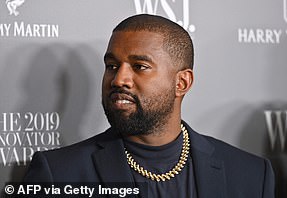 “What Christmas Really Means” — The Erwins

“Acid for the Children: A Memoir” — Flea

Producer Of The Year, Non-Classical

Producer Of The Year, Classical

“On The Tender Spot Of Every Calloused Moment” — Ambrose Akinmusire

“The Intangible Between” — Orrin Evans and the Captain Black Big Band

“Songs You Like a Lot” — John Hollenbeck with Theo Bleckmann, Kate McGarry, Gary Versace and the Frankfurt Radio Big Band

“I Remember Everything” — John Prine – WINNER

“All My Dues Are Paid” — Frank Bey

“You Make Me Feel” — Don Bryant

“Have You Lost Your Mind Yet?” — Fantastic Negrito – WINNER

“Up and Rolling” — North Mississippi Allstars

“Thanks for the Dance” — Leonard Cohen

“Song for Our Daughter” — Laura Marling

I Love Everything — Patton Oswalt 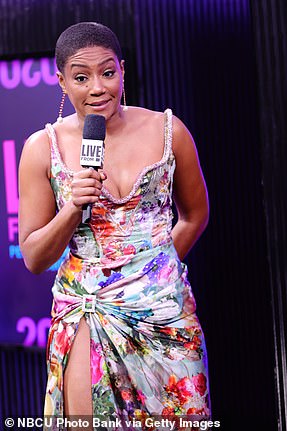 “The Prince of Egypt” (Original Cast)

“A Beautiful Day in the Neighborhood” (Various Artists) 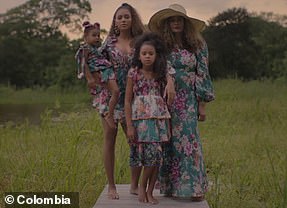 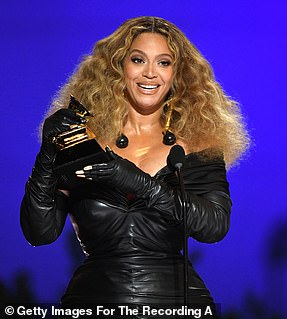 What a feat! Beyonce broke the record for most wins ever by a singer with 28 as she won Best R&B Performance

“Wonder What She Thinks of Me” — Chloe X Halle

“Anything for You” — Ledisi – WINNER

“It Is What It Is” — Thundercat – WINNER

“Highest in the Room” — Travis Scott 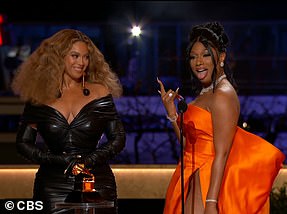 “Stick That In Your Country Song” — Eric Church

“Who You Thought I Was” — Brandy Clark

“Some People Do” — Old Dominion

“Your Life Is a Record” — Brandy Clark 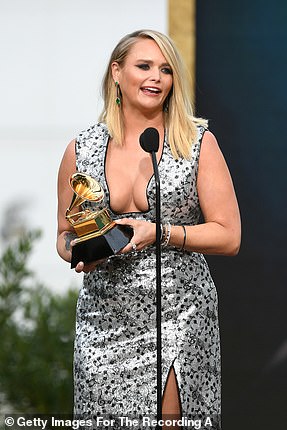 Golden: Best Country Album was given to Miranda Lambert for Wildcard

“All the Ladies” — Joanie Leeds – WINNER

“Be a Pain: An Album for Young (and Old) Leaders” — Alastair Moock And Friends