Once the most-liked member of the Royal Family, Prince Harry currently languishes with his scandal-prone uncle, Prince Andrew, in the (un)popularity stakes.

Now, the Duke and Duchess of Sussex appear to be taking drastic measures. I can disclose that the couple have ditched Sunshine Sachs, the New York-based public relations outfit that has been advising Meghan Markle since her days as an actress on legal drama Suits.

‘This is a really big deal for Meghan,’ a source tells me. ‘She takes the view that she doesn’t need to pay an outside firm a lot of money to do PR for her and Harry any more.’

Sunshine Sachs’ partner Keleigh Thomas Morgan played a key role in establishing the Sussexes in California, sharing her contacts and a powerful network of advisers and famous friends. A long-term friend of Meghan’s, she helped devise the strategy for the couple’s African tour in 2019, when they were still working members of the Royal Family. 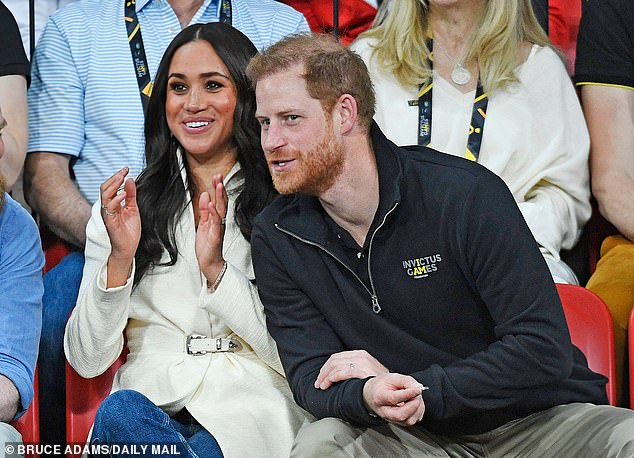 Once the most-liked member of the Royal Family, Prince Harry currently languishes with his scandal-prone uncle, Prince Andrew, in the (un)popularity stakes

Keleigh, 45, was a guest at the royal wedding and has also represented American actor Tyler Perry, whose Los Angeles mansion Harry and Meghan used as a base while house-hunting.

But from now on the publicity for their numerous ventures is being handled ‘in-house’ at their charitable foundation, Archewell, by former Silicon Valley bigwig Christine Schirmer, who’s head of communications. Toya Holness, who was appointed as ‘global press secretary’ in March 2021, was reported to have parted company with the Sussexes earlier this year.

Schirmer should certainly be kept busy. Not only does Meghan’s series of podcasts for audio giant Spotify resume broadcasting next week, but the couple have a string of big projects in the pipeline including Harry’s highly controversial autobiography and a reality television show for U.S. streaming firm Netflix.

This week, the Mail on Sunday revealed that Harry had launched an 11th-hour bid to alter his memoir amid fears it would be seen as insensitive after the Queen’s death, which saw a public outpouring of support for the Royal Family.

Harry and Meghan refuse to communicate with the popular Press, while a Sunshine Sachs spokesman declined to comment.

However, a source with knowledge of the company’s relationship with the couple insists: ‘When Sunshine Sachs began working with the Duke and Duchess, the plan was always for it to be temporary until a full-time internal team could be created. After they were hired, Sunshine Sachs worked alongside them to help the transition. All sides are on good terms and periodic advisory work continues.’

Why Jodie is looking at IVF

Jodie Kidd, who has not yet named a date for her wedding, has voiced fears that she won’t be able to have a child with her ex-Royal Marine fiance, Joseph Bates. 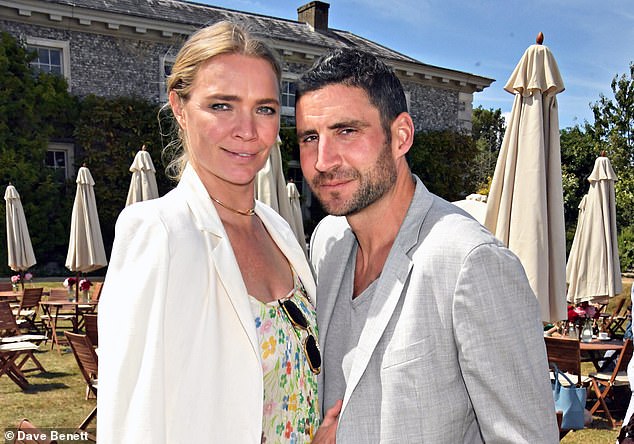 Jodie Kidd, who has not yet named a date for her wedding, has voiced fears that she won’t be able to have a child with her ex-Royal Marine fiance, Joseph Bates

Twice-married Jodie admits considering IVF treatment. She tells the Divorced Not Dead podcast: ‘I have talked about freezing my eggs, but we just haven’t done it yet.’

Sir Rod Stewart’s wife Penny Lancaster, who began working as a special constable last year, has spoken of her pride serving at the time of the Queen’s funeral.

‘It was probably the proudest moment I’ve had, other than giving birth to my kids,’ Lady Stewart, 51, tells me at a performance of Moulin Rouge at the Piccadilly Theatre in the West End. 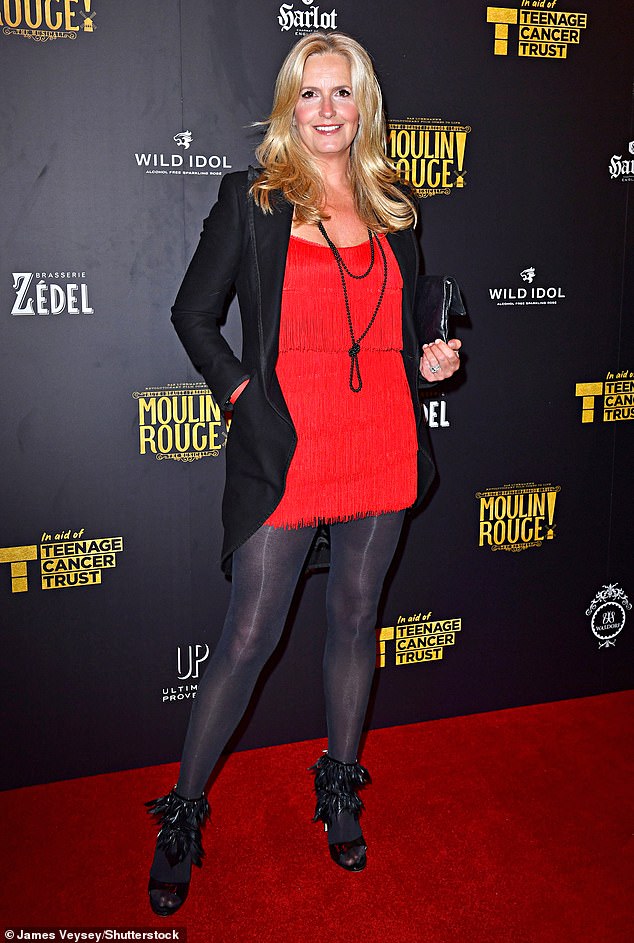 Sir Rod Stewart’s wife Penny Lancaster, who began working as a special constable last year, has spoken of her pride serving at the time of the Queen’s funeral

She even cancelled plans to reunite with Sir Rod, in the U.S., so she could be there when the Queen’s coffin arrived at RAF Northolt. ‘He completely understood because it’s my duty and it means a lot to me.’

Neon Trinny goes for bold hues and a massive ring

Trinny Woodall is yet to get engaged to her art collector boyfriend Charles Saatchi, so she’s started sporting an eye-catching adornment on her ring finger instead.

The beauty entrepreneur, 58, was spotted in Notting Hill, West London, wearing a ring that contains lip balm from her Trinny London make-up range.

She couldn’t be missed in a £172 neon yellow shirt by aristocratic designer Serena Bute, long purple coat, and violet trousers by Victoria Beckham.

Saatchi, 79, was previously married to Nigella Lawson, 62, who claimed she was subjected to ‘intimate terrorism’ during their ten-year marriage. He had earlier been pictured at a Mayfair restaurant table with his hand at the domestic goddess’s throat.

Trinny Woodall is yet to get engaged to her art collector boyfriend Charles Saatchi, so she’s started sporting an eye-catching adornment on her ring finger instead

David Beckham was best man at his wedding, and Dave Gardner seems to share the former England captain’s allure.

Having been engaged to Hollywood star Liv Tyler and married to actress Davinia Taylor, Gardner has now bagged another beauty. 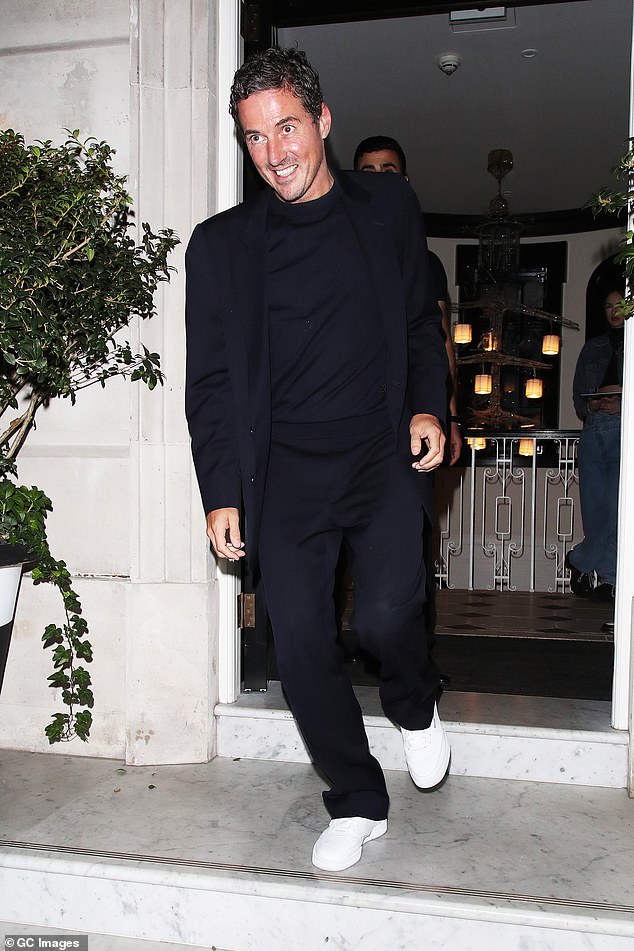 David Beckham was best man at his wedding, and Dave Gardner seems to share the former England captain’s allure 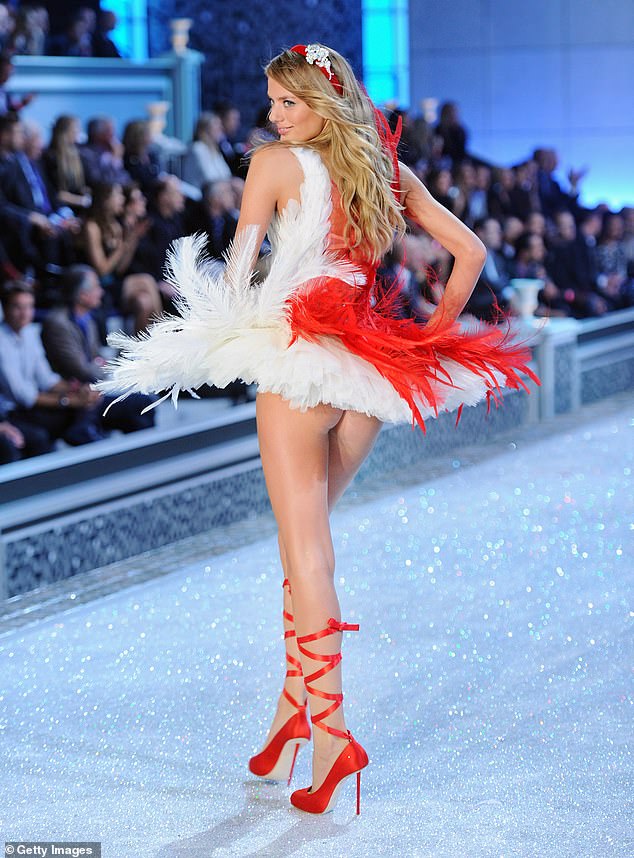 I hear the sports agent, 46, is going out with Victoria’s Secret model Jessica Clarke, 29 (pictured). ‘Their relationship’s at a very early stage,’ a source close to the pair tells me. ‘They’re just having fun and taking things slowly, but things are going well

I hear the sports agent, 46, is going out with Victoria’s Secret model Jessica Clarke, 29. ‘Their relationship’s at a very early stage,’ a source close to the pair tells me. ‘They’re just having fun and taking things slowly, but things are going well.

‘Dave’s children will always be his priority, though, so he’s not just going to bring another woman into their lives at the drop of a hat.’ Gardner has one child with loo roll heiress Taylor and two with Tyler.

Despite sitting for more than 960 portraits, Queen Elizabeth didn’t always stay still. Christian Furr tells me of his visit to Buckingham Palace: ‘There was music outside from the changing of the guards and she started bopping around,’ he says, mimicking her movements. ‘I had to say, “Do you mind keeping your head still?” and she went, “Isn’t it still already?” ’ His portrait is on display at the Quantus Gallery in the East End of London until October 12.

Peer really is an old romantic, marrying again at 84

Good to know there’s still some vim and vigour in the House of Lords.

I hear that a Deputy Speaker, the 5th Lord Brougham and Vaux, has just got married again — at the age of 84.

His bride is tour guide Sezgin Patterson, whom he met in Cyprus. In the words of tour operator Noble Caledonia, Sezgin was ‘a firm favourite with our clients for many years’. It points out that her ‘organisation, humour and local knowledge (would have made) this a trip to remember’.

It certainly was for Lord Brougham, though he concedes that they didn’t rush to the altar after they first met. ‘It was 16 years ago on tour in Cyprus,’ he tells me. A degree of caution was understandable: his lordship had been married twice before. ‘I just felt that it was the right time to do it,’ he adds, explaining his decision to take the plunge now.

The new Lady Brougham supplies a pertinent detail. ‘It was a House of Lords bridge tour,’ she remembers. Lord B was evidently dealt the perfect hand.

Ever since a 13-year-old Princess Elizabeth was introduced to a cadet, Philip, aged 18, while she was touring the Britannia Royal Naval College in Devon, she had eyes only for the future Duke of Edinburgh. However, actor Brian Blessed, 85, claims our late monarch had a soft spot for him. ‘The Queen adored Z Cars,’ he says of the 1960s police drama. ‘It was said that she secretly admired Brian Blessed and thinks he’s lovely.’ Appearing at the launch of a Tubular Bells 50th anniversary album at Olympic Studios in South-West London, Blessed says: ‘She used to come and watch Z Cars quite a lot, as it was filmed live in a studio. She did say Brian Blessed as Fancy Smith was her favourite character — she was very partial to me.’ 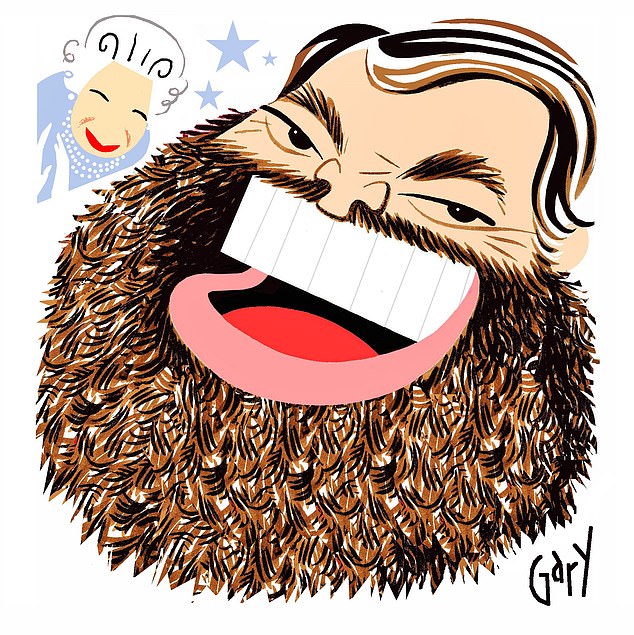 The smart set’s talking about… Sophia’s second baby in one year!

The daughter of former Tory treasurer Lord Hesketh has just given birth to her second child, less than a year after her first.

‘Two under one — what fun,’ says Sophia, 37, who is rumoured to be the first girl Prince Harry ever kissed. She and her ‘Turnip Toff’ husband, Oliver Birkbeck, 49, have named their son Alby Arthur, brother to Frankie. 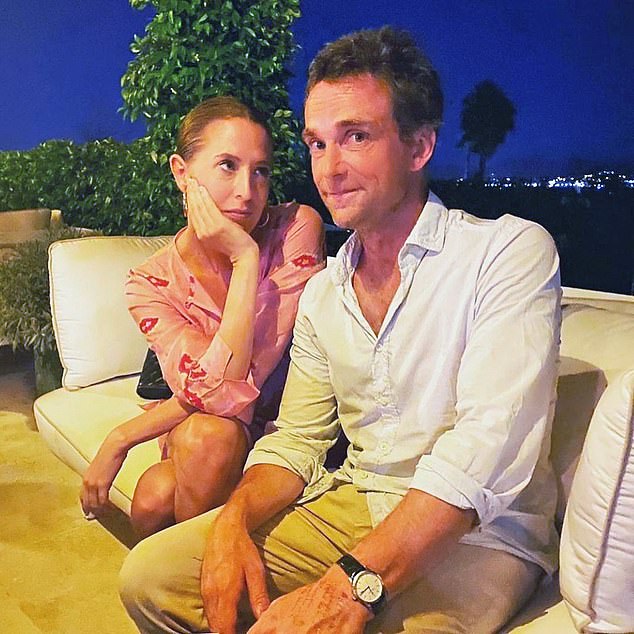 Sophia and Birkbeck, who owns the 2,000 acre Little Massingham estate in Norfolk, got married in June

The fashion stylist become pregnant just three months after she was introduced to Ollie on a blind date by the Marchioness of Cholmondeley, the Prince and Princess of Wales’s friend and Norfolk neighbour better known as model Rose Hanbury.

Sophia and Birkbeck, who owns the 2,000 acre Little Massingham estate in Norfolk, got married in June.