Elsa Hosk shared some stunning images of herself breastfeeding her seven-week old daughter Tuulikki as she returned to work for the first time since giving birth.

The Swedish model, 32, welcomed a little girl with her longtime partner Tom Daly last month and proudly shared the snaps of her feeding Tuulikki on Tuesday.

Elsa said that the images drew criticism from men in her DM’s, as she questioned why they are offended by something ‘so natural’ as feeding her daughter.

Scroll down to video 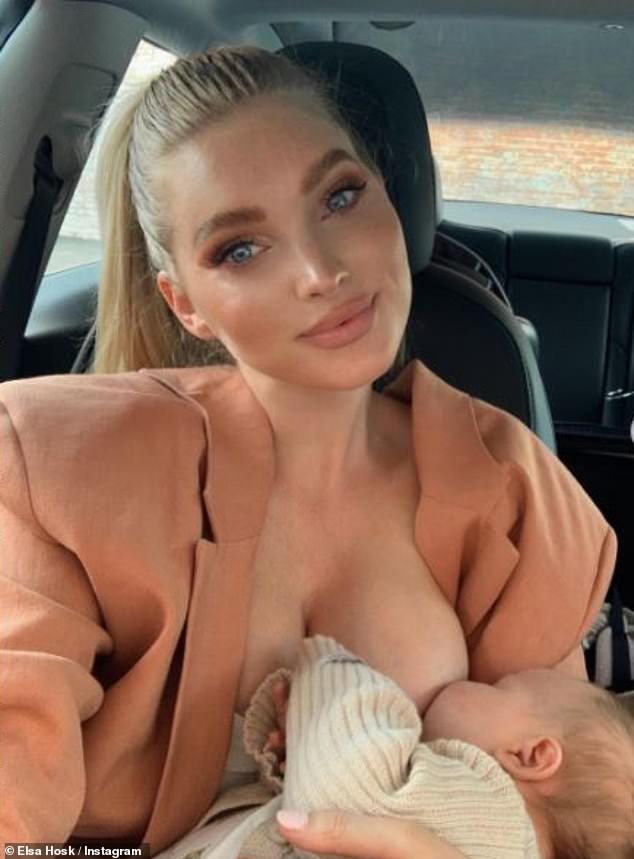 She works hard for the money: Elsa Hosk, 32, returned to work in front of the camera on Tuesday, some seven weeks after giving birth to her daughter Tuulikki

‘Moms first day back on set and look who came along,’ the star declared in the caption of three photos showing her nursing her little girl.

The first-time mother was being driven to and from her job in an SUV when she decided it was time to feed her baby girl.

Making it easy to access, the top model unbuttoned her peach-colored blazer and slightly pulled down her top.

Hosk looked positively radiant as she cradled Tuulikki while feeding her.

In one photo, she got a little flirty for the camera and puckered up her lips, and she flashed a big beaming smile in another. 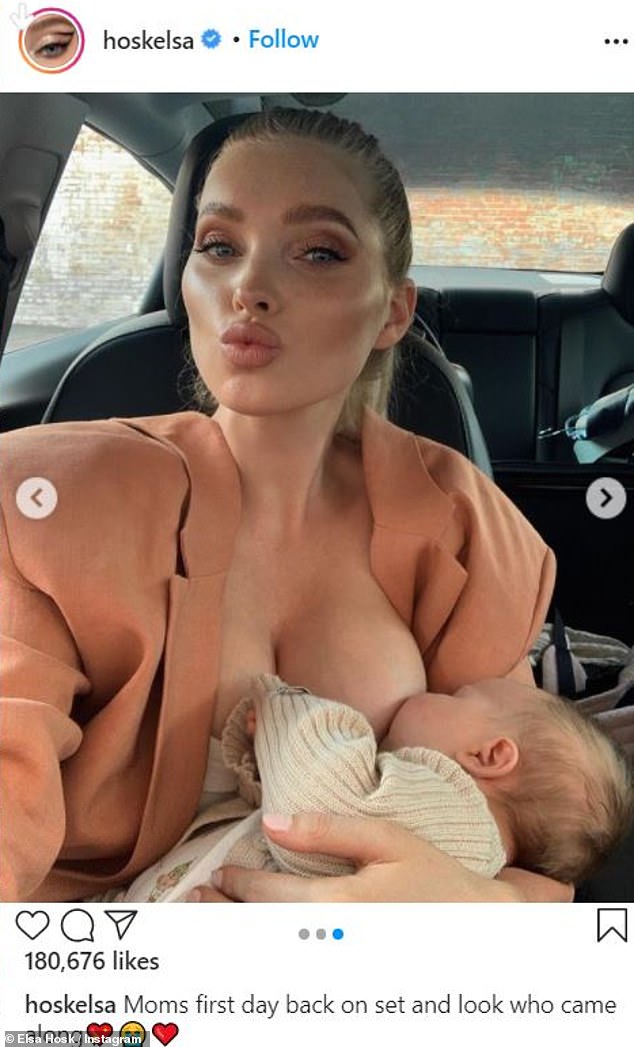 Gift of life: The Swedish model announced her return to work with a set of photos on Instagram showing her breastfeeding her baby girl 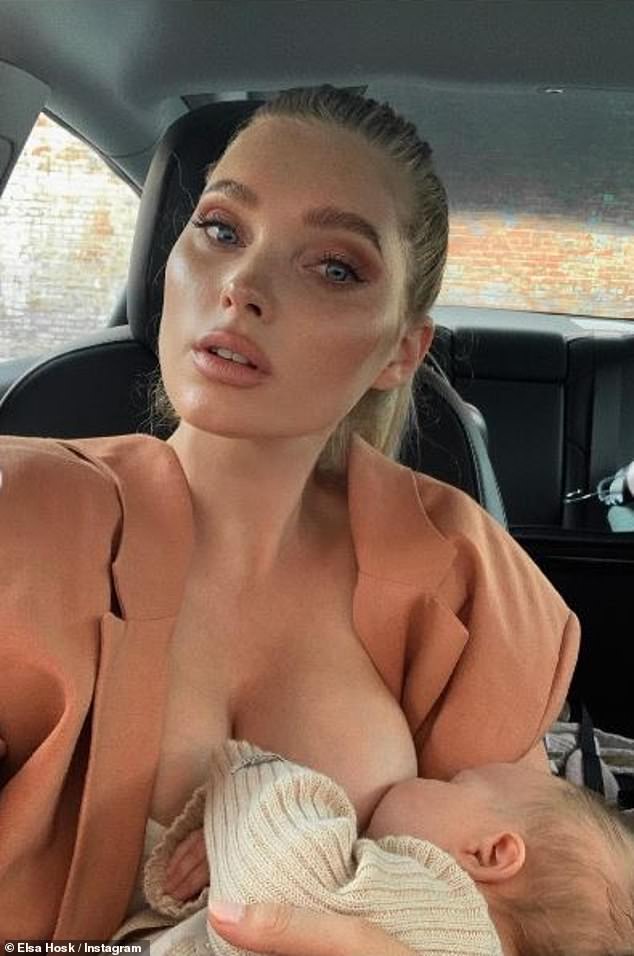 Nature calling: Dressed in a peach-colored blazer, the first-time mother was being driven to and from her job in an SUV when she decided it was time to feed her daughter

Hosk pulled her long blonde tresses back into a ponytail ahead of her day back in front of the camera in a studio.

New mother Hosk dressed Tuulikki in a cream-colored sweater for the workday.

‘Mom on set life,’ she confessed in a quick video she shared on her Instagram Story.

Showing her skills in front of the camera, Hosk also declared ‘she’s back’ in a video where she’s dropping a number of poses in black leather pants and a matching cropped jacket. 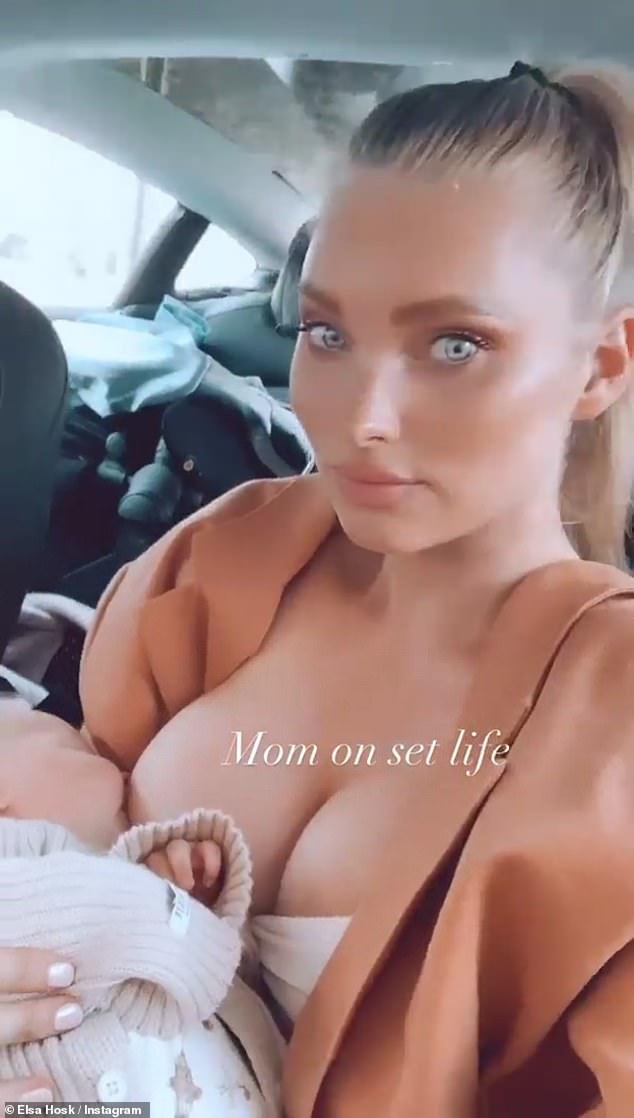 Proud mama: The top model also announced her return ‘to set life’ in a quick video  of her breastfeeding her daughter that she posted on her Instagram Story 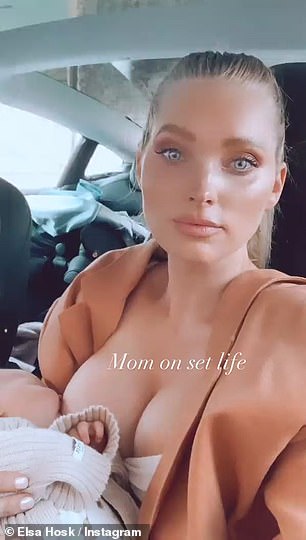 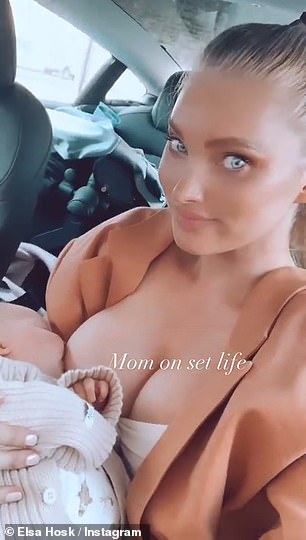 Fashionista: Hosk pulled her long blonde tresses back into a ponytail ahead of her day back in front of the camera and dressed her daughter na a cream-colored sweater

The blonde beauty also used Tuesday’s posts to reveal that she’s been getting messages from people who do not support her sharing breastfeeding images on social media.

‘Find it interesting the amount of dm:s I get from men who get offended when you post a photo breastfeeding… like,,, why is the most natural thing so offending to you?’ she wrote across another photo of her breastfeeding.

‘Breasts literally exists so we can feed out children.’ 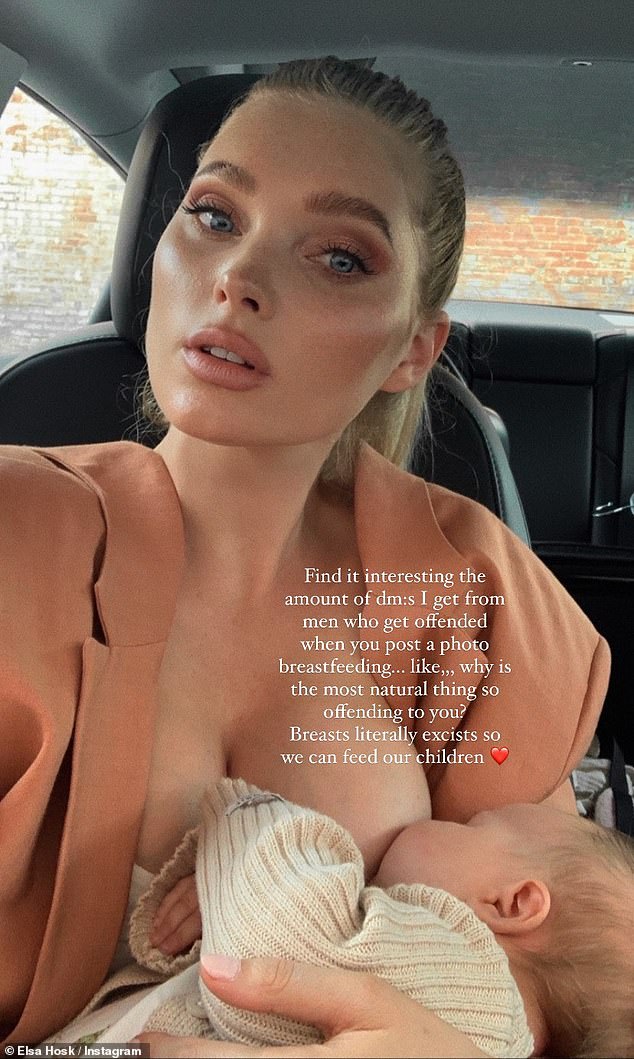 Offended: The top model also used Tuesday’s posts to reveal that she’s been getting messages from people who do not support her sharing breastfeeding images on social media 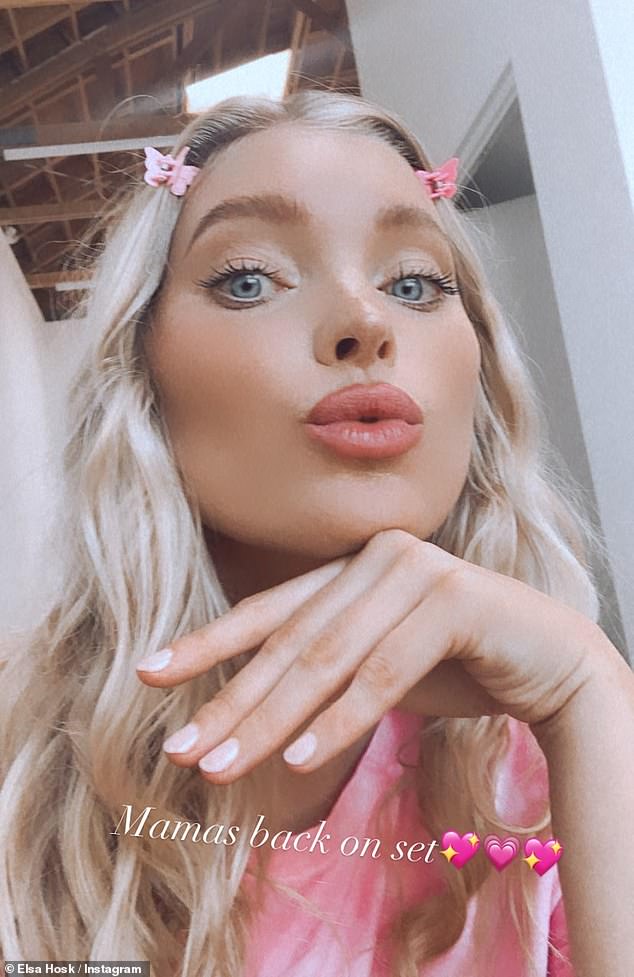 Her take: Hosk had a simple message to those offended by her breastfeeding photos and videos:  ‘Breasts literally exists so we can feed out children’

Hosk has been giving her 6.4 million Instagram fans and followers updates on her post-pregnancy life, which includes embracing her new-found curves after giving birth for the first time.

She shares her new bundle of joy with longtime partner Tom Daly.

Having had Manhattan as their primary home for many years, they couple moved across country, into a $4.3 million five-bedroom home in the Los Angeles neighborhood of South Pasadena, near the end of 2020. 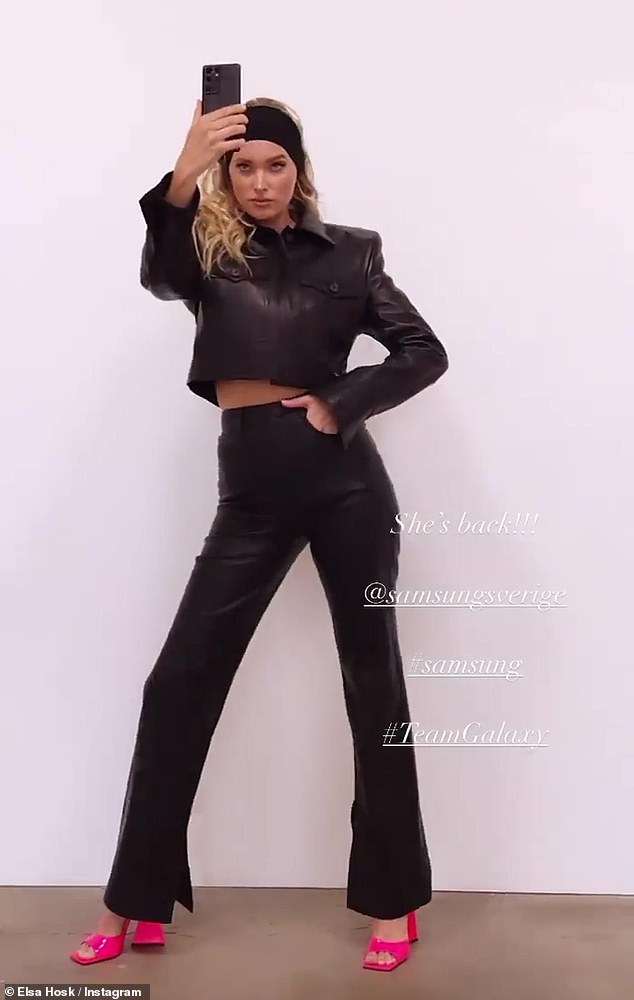 Bust a move: Hosk also declared ‘she’s back’ in another Insta-Story video

Strike a pose: Hosk showed off her post-baby body in a black leather ensemble 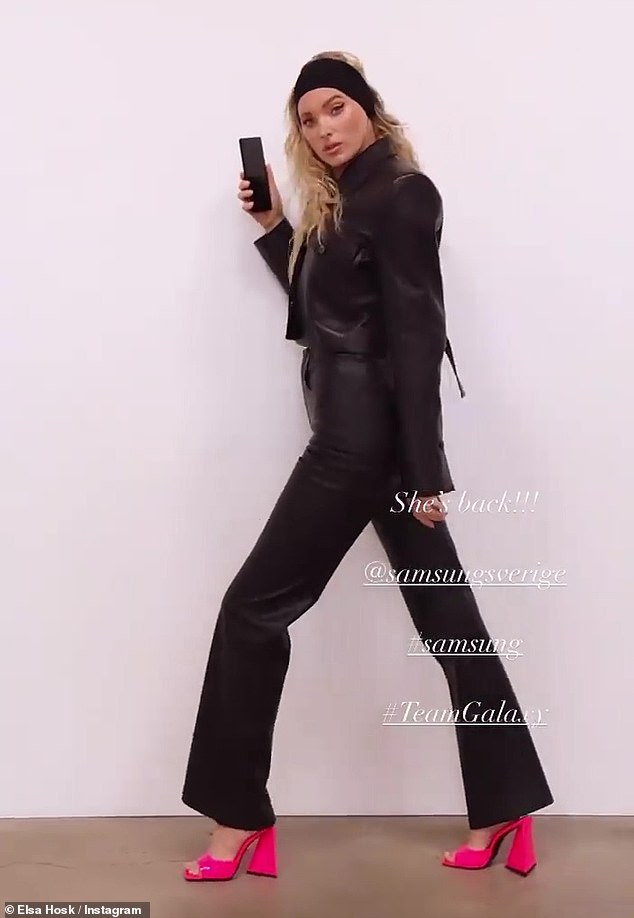