She has dropped over three and a half stone after dedicating hours to exercising and eating healthily.

And Gemma Collins, 40, showed off her amazing curves in a metallic green jumpsuit as she posed in a lush green field with a white horse behind her.

In an Instagram post on Wednesday she told her followers that they shouldn’t follow the crowd: ‘FOLLOWING the crowd is easy it takes everything to stand alone.’ 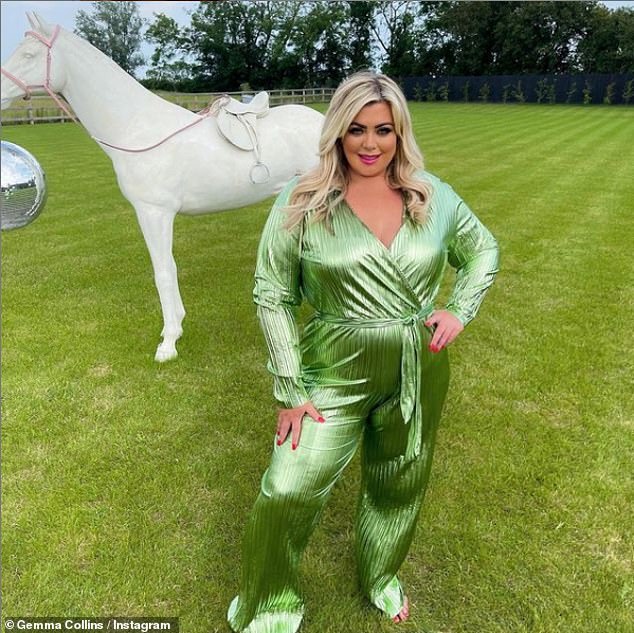 Amazing: Gemma Collins, 40, looked fantastic as she showed off her amazing curves in a metallic green jumpsuit on Instagram on Wednesday

She continued: ‘why wear what everyone else is wearing … Darlings that’s so boring.’

The former TOWIE star looked sensational in the image as she exuded 70s glamour in the ensemble, styled her blonde locks in soft waves as they flowed over her shoulders.

She wore a slick of her staple pink lipstick over her pout and glamorously accentuated her blue eyes with a dark eyeshadow look.

Stand out: In an Instagram post on Wednesday she told her followers that they shouldn’t follow the crowd: ‘FOLLOWING the crowd is easy it takes everything to stand alone’

The reality TV glamour puss posed with one hand on her hip and another on her bent thigh, showing off her manicured red nails.

Gemma opted to bare foot for the photo she shared with her 2.2 million followers.

The post comes after she announced on Wednesday that she is ‘super confident’ in bed, no matter what dress size she fits into.

The Essex diva boasted about her prowess in the bedroom, stating she has always been ‘flexible’ and likes to ‘move around’.

When asked if her new love for fitness has improved her sex-life, Gemma responded: ‘For me, I’ve always been super confident in the bedroom.

‘I’m really flexible and I’ve always moved about the bedroom whether I’ve been bigger or smaller, so it’s never really affected me, but I am really confident.’

She added: ‘I think everyone can have sex – any size, shape or background’

Offering love-making advice to her fans, Gemma encouraged others to just ‘let loose and be free’ instead of worrying about their size when they’re intimate.

She also revealed she is ready to make love ‘all the time’ because she has bundles of energy. 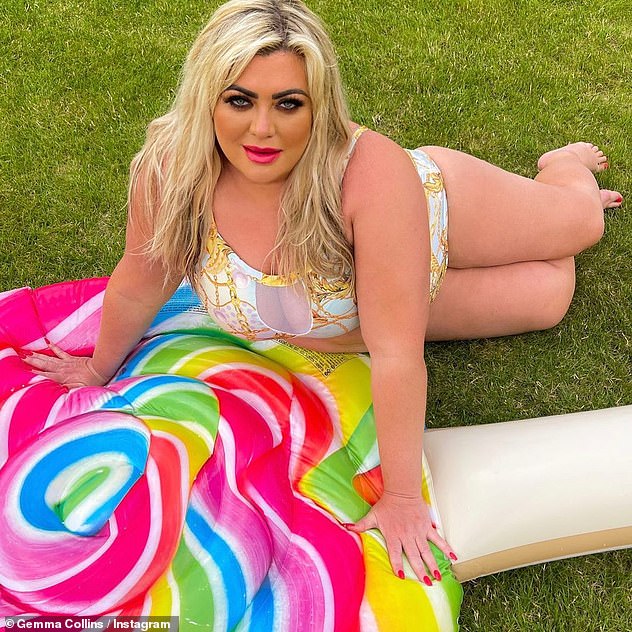 ‘I’m really flexible and always move about the bedroom’: The Essex diva announced on Wednesday that she is ‘super confident’ in bed, no matter what dress size she fits into

The former TOWIE star rekindled her relationship with ex fiancé Rami Hawash earlier in 2020, and praised her partner for making her feel comfortable in the skin she’s in.

‘To be honest, if you’re not confident then someone’s going to pick up on it and it makes it 10 times worse,’ Gemma said. ‘If you’ve got a partner that adores the bones of you, there’s nothing to be unconfident about you know?’

She added that you know you’ve found the right person when they don’t try to ‘change’ you and instead love every part of you.

Rami had originally proposed to Gemma by placing the ring in a Christmas pudding when they first dated more than seven years ago, and she wore it again in 2017.

Four weeks later however, Gemma had called off the engagement and the star was spotted not wearing the ring at the National Television Awards in January.

She got back together with the businessman after she split from fellow former TOWIE star James Argent earlier this year, and previously insisted they were ‘just having fun’.

Earlier in July, Gemma boasted about her ‘passionate’ bedroom antics with Rami. The reality star said her sex life is the best it’s ever been and that ‘anything goes’ in the boudoir.

She made the saucy confessions after partnering with condom brand Durex, announcing the collaboration by posing in a bed strewn with contraceptive and lube.

Clad in a silk camisole, Gemma looked phenomenal as she posed on her bed while urging her Instagram followers to map their path to ‘sexual satisfaction’. 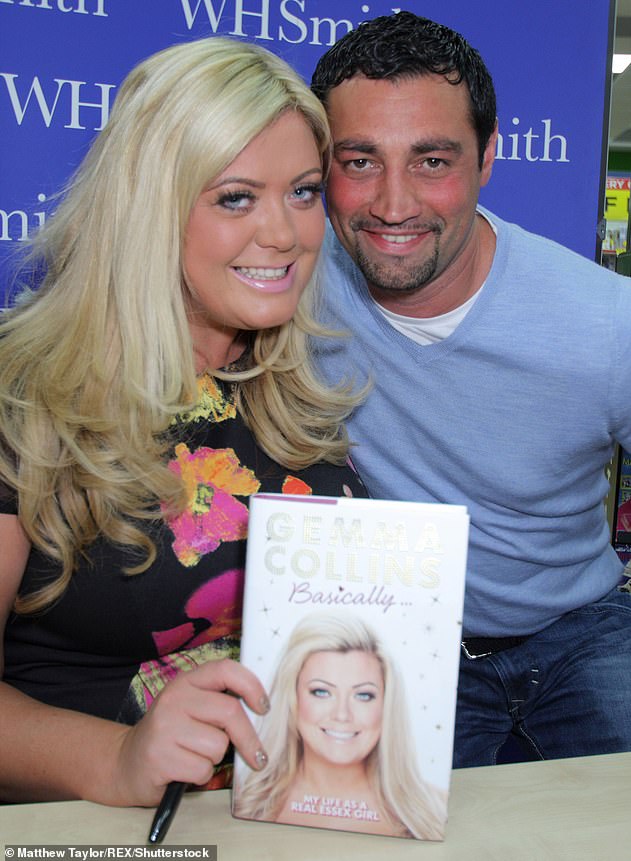 Support: The former TOWIE star rekindled her relationship with ex fiancé Rami Hawash earlier in 2020, and praised her partner for making her feel comfortable in the skin she’s in (pictured in 2013)