Gerardo Ortiz Reflects on the Future of Regional Mexican Music

Gerardo Ortiz has broken a slew of records over the years but one of his biggest achievements has been helping take regional Mexican music to new heights. The 31-year-old artist broke out 10 years ago with his first studio album, Ni Hoy Ni Mañana. Now, to celebrate a decade of success, he has released the aptly titled LP Décimo Aniversario (10th Anniversary).

Known for his brash and infectious corridos, the GRAMMY-nominated artist is reflecting on his career, the future of regional Mexican music, his biggest challenges and the importance of evolving and staying true to his sound in a competitive music landscape.

“I think that in our genre, banda and norteño music has greatly evolved,” Ortiz tells ET. “We have reached different corners of the U.S. and many other countries. We have stepped onto a variety of stages. I was one of the first artists to bring corridos norteños to the Latin GRAMMYs. So I think that [being heard in new spaces] has been the most important thing in our genre. The industry has drastically changed for everyone, from compact discs to digital music and the new streaming platforms, to the way that the fans interact with the artists. It’s totally different.” 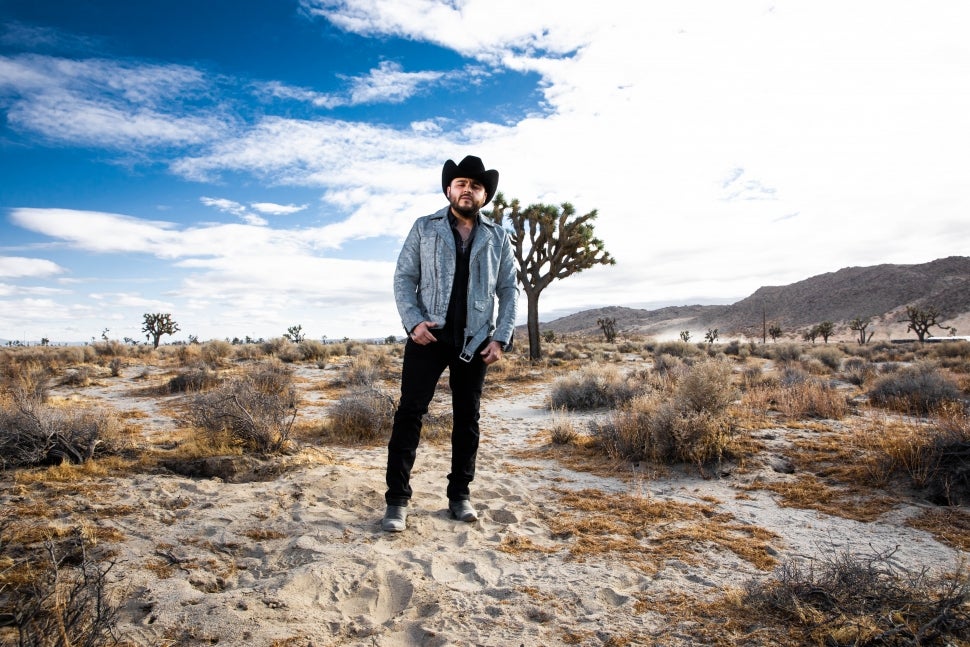 Upon breaking out, Ortiz was the top-selling regional Mexican act, earning countless accolades and holding the record for being the solo artist with the most No. 1s in the 26-year history of the Regional Mexican Airplay Billboard chart.

Kicking off a new decade of what will undoubtedly be filled with continued success, Décimo Aniversario includes 11 new songs, featuring banda sinaloense and traditional mariachi sounds. Meanwhile, Ortiz is in full gear and back on the road after the coronavirus pandemic shut down the world and concerts.

ET: Which was your favorite track or your most personal on Décimo Aniversario?

Gerardo Ortiz: I had a lot of fun with “El Perro.” It was the first single and we kicked things off with that one because the composition was all mine. I like that nowadays I can play around with different topics and themes, from the music to the lyrics. In a lot of new corridos, people talk about bad relationships, jealousy, or how you can have a close friend and they betray you. I touched on a lot of topics like that. Also, I had a great time shooting the video for “El Perro.”

Over the years, do you think your approach to creating music changed or do you have the same method?

Of course it’s changed. I love how music has evolved. There’s so many new tools we can use. I think that the world of corridos, we come from singing about corridos muy rancheros, muy campireños. Now, we’re in the city, corridos are more modern and talk about parties. And while they have the same sound, my music for example, I never want to lose the essence of the genre. But even in some of my songs, I include names of American restaurants like Benihana, things like that that give me a lot of liberty and more to talk about.

Looking at your career, what would you say were your biggest challenges as an artist?

There was a moment where I started getting the chance to perform at major and important stages in the U.S. and Mexico and I felt like it was a lot of pressure because these were places where people that I admired since I was young also performed in the past. They were people from all genres like Juan Gabriel, Vicente [Fernández], Joan [Sebastian], all the greats. And at that moment [it was a challenge]. But thank God the crowds started growing, the applause, and then it motivated me to be like, “Let’s go to this auditorium. Let’s play at this arena.” I had to keep moving forward. And another challenge in my career has been to continue pleasing my fans and public. To continue to have that connection, that understanding of what the audience likes and wants. That has been one of the biggest challenges; el poder seguir siendo del gusto de ellos.

How have you had to evolve as an artist and what other collaborations are in the works for you?

We did some collaborations with the guys from Gente de Zona. It was a more tropical rhythm with a bit of mariachi. We did a trap corrido with Darell that the fans really enjoyed. I still see their comments and support. But I think it would be that, continuing to make those connections with other artists and continue to surprise the public with different sounds, other genres, crossovers. We’re working on stuff like that. There have been some that have been brought to the table. Right now, urban and trap are very popular. In the future, we will continue to experiment with other sounds.

How do you think Latin music has broken boundaries in these last years?

I love it. I feel like, with everything, it was time that Latin music got its moment and took the top spot. I love that we’re on the charts, with music from Latin artists from all around the world. The language has helped a lot. Back in the day, reggaeton was very different, as well as my genre, banda was very different, very ranchera. And now we have modernized it. In both genres, we have songs about love, falling out of love. Before there wasn’t much of that, it was all get down, perrea, dance and party. And our genre too has cleaned up a lot. We have faster corridos to party and dance too. That has helped us get out of the ranch a bit [and have more people hear our music].

How has the last year, amid the coronavirus pandemic, affected you as an artist and as a person?

At the beginning I was like, “What are we going to do? When will I get to sing?” We were all worried, the whole team. I’m usually on tour. Taking a look at the last 10 years, since 2009, I was on tour in Mexico, the U.S. I never had a chance to take a break or pause. Not even a forced break. And now this was a forced break because of the pandemic. And to be honest, I took advantage of the time to do the collaborations that I had been wanting to do. I also enjoyed spending time with my son since I was always on tour. He’s three years old and I hadn’t had the time to be there for him and this time gave me a chance to hang out with him. I was also in the studio, we were creating a lot of things, a lot of content for the album, and we already had almost all of the videos ready. I think for me, personally, the downtime came at a good moment.

You’ve said that your dad was the first person who believed in you. You, as a father, how do you support your son and family’s dreams and goals?

My entire musical career has always been a family dream. My dad was always supporting me, just like my mom and brothers. It just became a dream for all of us. It was a family dream from the moment I started getting people to hear my music. But now the support goes back to them. I have been supporting my brother, Kevin, who has been singing and has been by my side and creating music together. But my son, we will see what he wants to do. And if he wants to do something else that isn’t singing, we will support him in whatever he chooses.

You’re on a mini tour right now, but you have a big show coming up on Oct. 2 at the Microsoft Theater in Los Angeles. Tell us about being back on tour.

We kicked off the tour, but in October we are taking an important break, here at home in Los Angeles, to celebrate the last 10 years. My birthday is Oct. 5 and that month I always like to return to L.A. and do a concert here. But just last week, we were in Florida, we will be in Guanajuato, then we will be in Austin, Texas, and more places until October and November. The fans have been loving it. La gente anda con ganas. traen ganas igual que nosotros. Traen ganas de tomar tequila. Todo el mundo está igual, todos estamos inquietos de salir y de pasar un buen rato.

So what’s in the works for you? What can fans expect?

We have a couple more things to come related to the new album. But we are preparing something very special for 2021. I will be recording a live album, we’re going back to what I did in the beginning of my career, where I recorded more live music, unedited and I think the fans really enjoy it. So we are going to do an album of corridos recorded live for the fans. For the fans who love Mexican Norteño corridos. [Décimo Aniversario] es de banda, ahora viene lo norteño!

We will be doing a very special tour here in the U.S. Don’t miss it. We will also be touring in Mexico. We are preparing something very special and you will not want to miss it.

Reflecting on your success from the last 10 years, what would you tell a 21-year-old Gerardo who was starting his career?

From a very young age, I was always very passionate about what I liked. There was a point in my life where I loved skating. I skated every day, every hour. So when I started making music, I fell in love with what I was doing. I think I would tell myself to continue being persistent just like I am today. I have always had a lot of perseverance.