The 58-year-old rocker – who during the pandemic has shared anti-mask and anti-lockdown tweets, as well as recording a track in protest of lockdown – announced on on Wednesday that he was cancelling his headlining gig, scheduled for September.

While vaccine passports have yet to be introduced, the musician wrote on Twitter: ‘My Saturday night headline show at NHBD Weekender Festival will now not happen! I refuse to accept vaccination proof as condition of entry. Refunds are available! X’ 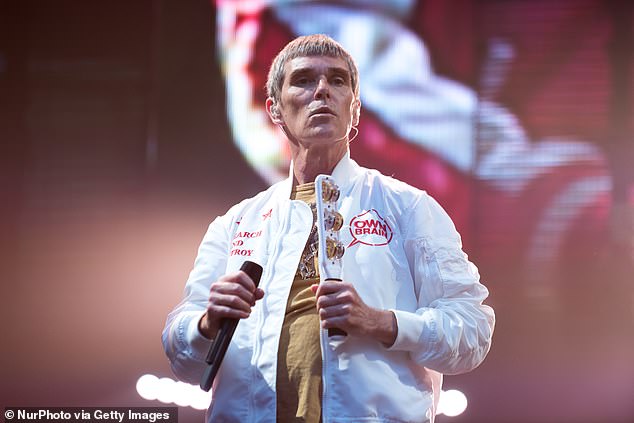 Vaccine passports have been at the forefront of discussions for several weeks, with the proposals giving those who have vaccinated access to clubs, bars and event spaces once the latest lockdown is lifted.

Bosses for Neighbourhood Weekender, which takes place in Ian’s hometown of Warrington, have confirmed that the musician will be replaced by James on the bill, after the festival was moved from May to September.

And while they have yet to reveal whether they will be requiring vaccine passports, they stated: ‘Following recent government announcement we are moving Neighbourhood Weekender to Friday 3, Saturday 4 & Sunday 5 September 2021.

‘James will be replacing Ian Brown as our Saturday night headliner. All tickets remain valid for the new dates. If you can no longer attend, please contact your ticket agent to arrange a refund. 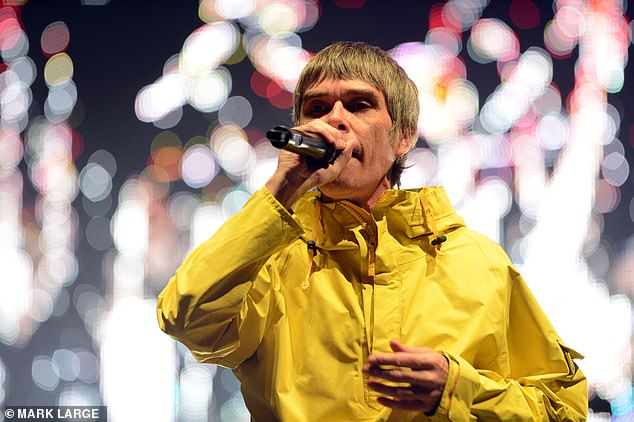 No longer on the bill: The 58-year-old rocker announced on on Wednesday that he was cancelling his headlining gig, scheduled to take place in September

‘Thanks for your patience and continued support for the event. You really are the best! We can’t wait to see you at the festival!’

Gerry Cinnamon will headline on the Friday, while the festival will close out with a performance by Catfish and the Bottlemen.

Ian’s announcement comes after Piers Morgan  applauded a fan of the rocker for calling him out when he claimed he didn’t want to perform to a vaccinated crowd.

Ian took to Twitter on Saturday to share his desire to ‘never ever’ put on a concert with his band if fans were required to have the COVID vaccine to buy a ticket.

One of his followers responded by joking he would be performing in ‘Butlins’, and Piers, 55, shared his delight at the response by retweeting it and posting a number of clapping emojis. 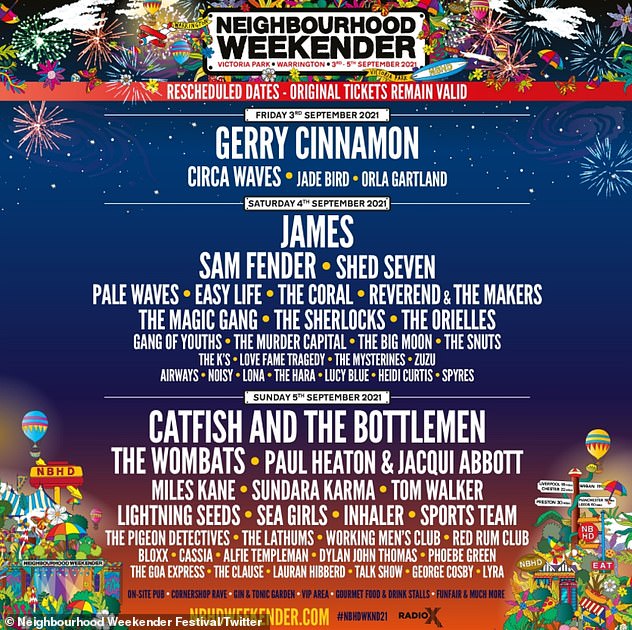 Replaced: Bosses for Neighbourhood Weekender, which takes place in Ian’s hometown of Warrington, have confirmed that the musician will be replaced by James on the bill 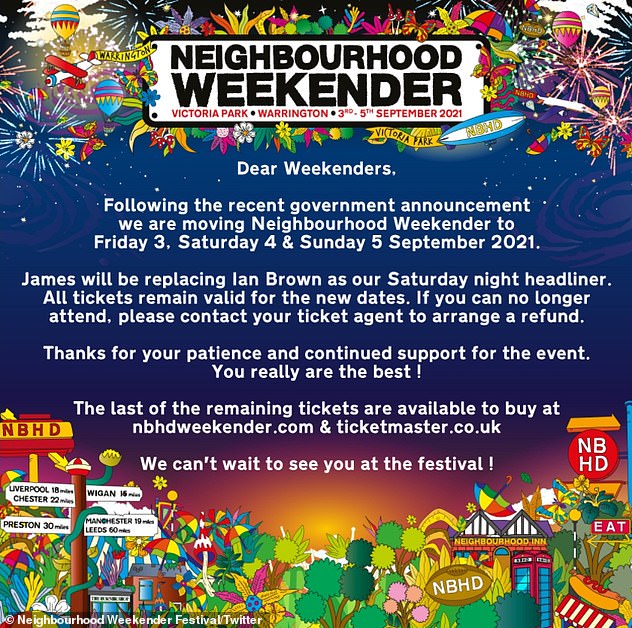 Ian’s original tweet read: ‘I will NEVER sing to a crowd who has to be vaccinated as a condition of attendance. NEVER EVER!’

The follower then cheekily replied to the singer: ‘That’s up to Butlins surely?’

Ian has been vocal of his scepticism over the novel coronavirus crisis and vaccinations, saying people didn’t need a vaccine passport and suggested wearing a mask was akin to wearing a tin foil hat.

His rhetoric has even led Jedward to call him out, as they said his tweets were ‘a nightmare’ and he had ‘discredited [himself]’ because of his remarks.

In since deleted tweets, Ian had said: ‘So I’m a conspiracy theorist HA! A term invented by the lame stream media to discredit those who can smell and see through the government/media lies.’ 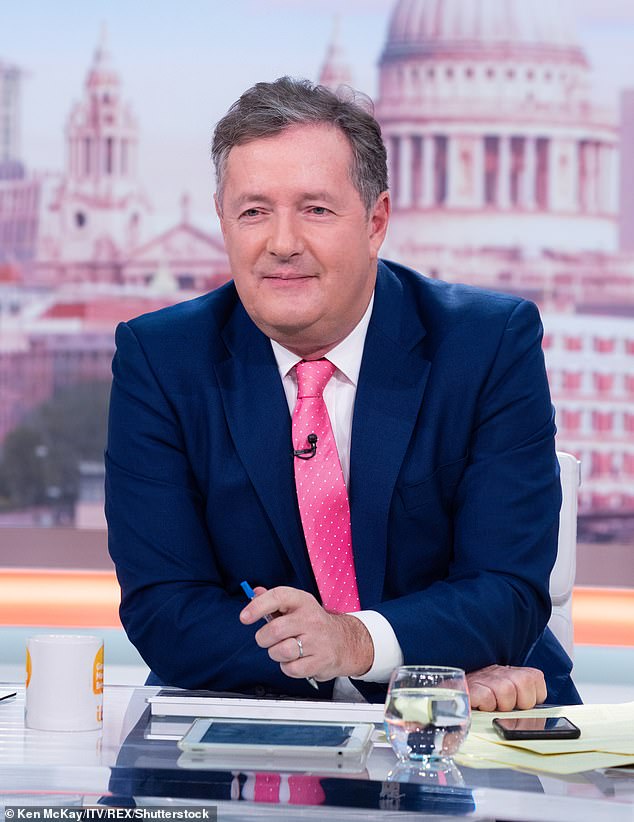 Support: Last week, Piers Morgan applauded a fan who called out rocker Ian for refusing to play a concert to people who have had the COVID-19 vaccination 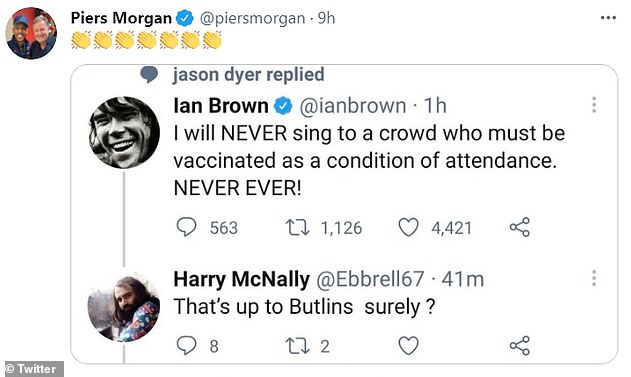 Anger: The musician took to Twitter to share his desire to ‘never ever’ put on a concert with his band if fans were required to have the COVID-19 vaccine to buy a ticket

To which Jedward hit back: ‘You discredited yourself with your backward views and non-logical actions. The public have lost all respect and credibility for your views!’

On Thursday, Chancellor Rishi Sunak admitted there are ‘various practical, legal and ethical issues’ with asking people to prove they have either been vaccinated or tested negative for coronavirus before being permitted into venues or businesses.

Cabinet Office minister Michael Gove is currently leading a review for Prime Minister Boris Johnson on whether bringing in ‘COVID status certificates’ would help with reopening the economy once virus restrictions have been lifted after June 21.

The Chancellor said the review could take months and only after it has been completed can ministers weigh up the pros and cons.

Speaking to ITV’s Good Morning Britain, Sunak said: ‘It is a difficult and complicated question because it raises various practical, legal and ethical issues.

‘We are working through those, so the Prime Minister has a committee and we have not just ethicists but doctors and business people working together to look at that particular question, to consider all the issues in the round and come up with some recommendations in a few months’ time and we will see if they can play a part.’

Former prime minister Tony Blair is a strong advocate for vaccine passports, arguing last week that it would be ‘hard to see how people have the confidence to go back to life as normal’ without them.

Health Secretary Matt Hancock has told MPs ‘it is clear” that individuals will need a way of showing that they have had a jab, with the European Union confirming plans for a “digital green pass’ to allow people to travel into the bloc by showing they have been vaccinated or had a negative COVID.

Shocking: Ian has been vocal of his scepticism over the coronavirus crisis and vaccinations, saying wearing a mask was akin to wearing a tin foil hat

Hitting back: His rhetoric has even led Jedward to call him out, as they said his tweets were ‘a nightmare’ and he had ‘discredited [himself]’ because of his remarks