I’m A Celebrity 2022: ‘There’s a lot of anger, isn’t there!’ Campmates moan about Matt Hancock’s constant Bushtucker Trials before he is finally let off by viewers

The I’m A Celebrity… Get Me Out of Here! campmates vented their frustration during Monday’s episode at Matt Hancock doing six consecutive Bushtucker Trials – before he finally escaped the next gruelling challenge.

Politician Matt, 44, has been repeatedly voted to complete various trials by the public since his arrival in the jungle on Wednesday.

And singer Boy George, Coronation Street actress Sue Cleaver and former rugby player Mike Tindall complained they weren’t getting a look in, with sportsman Mike claiming it made their time in camp ‘harder’. 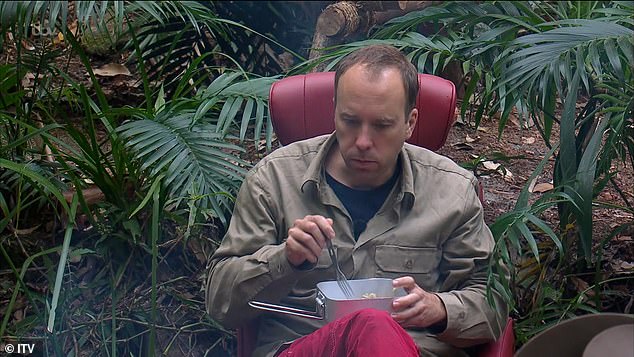 Unimpressed: The I’m A Celebrity… Get Me Out of Here! campmates vented their frustration during Monday’s episode at Matt Hancock doing six consecutive Bushtucker Trials

Speaking to Loose Women anchor and ITV newsreader Charlene White, Sue said of Matt: ‘He must be quite funny when he’s doing the trials.’

Referring to Matt’s time in office as the former Health Secretary during the pandemic, Sue said: ‘There’s a lot of anger, isn’t there,’ to which Charlene replied: ‘Yeah, they’ll just carry on. It’s an outlet.’ 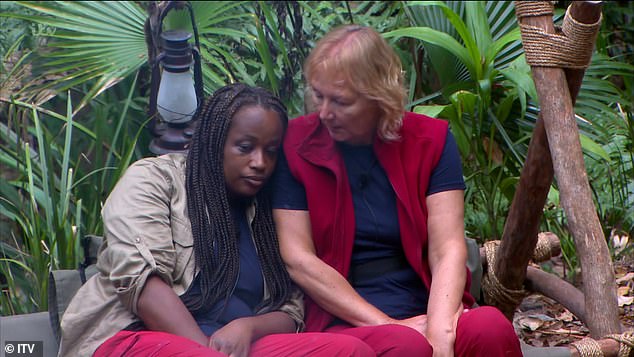 Voicing her opinion: Speaking to Loose Women anchor and ITV newsreader Charlene White, Sue said of Matt: ‘He must be quite funny when he’s doing the trials’ 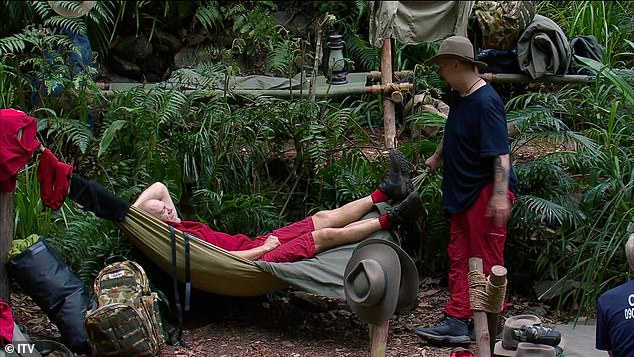 Frustration: Speaking to Mike, George said: ‘I suppose there’s a lot of people who are angry with Matt’

Speaking to Mike, George said: ‘I suppose there’s a lot of people who are angry with Matt.’

Speaking of being forced to spend all their time in the camp rather than leaving to take part in the Bushtucker Trials, Mike said: ‘It does make our experience harder because we’re always here. We don’t need to do anything.’

The MP for West Suffolk – who served as the UK’s health secretary during the COVID-19 pandemic – is controversially appearing as a contestant on the ITV jungle survival show and was chosen by the public once again to face unpleasantries to earn meals for camp in Deserted Down Under, which will aired on Monday. 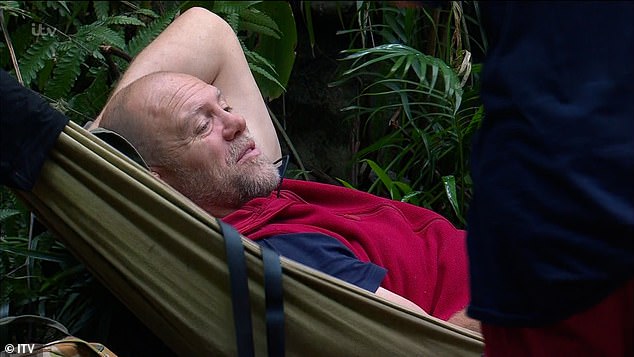 Tough: Speaking of being forced to spend all their time in the camp rather than leaving to take part in the Bushtucker Trials, Mike said: ‘It does make our experience harder’

He was seen covered in snakes as he lay in an underground pit as he attempted to collect stars which he could exchange for meals for his co-stars.

Matt managed to collect seven out of a possible 11 stars before returning to camp.

Later in the episode Matt finally escaped the wrath of the public having completed six consecutive trials. 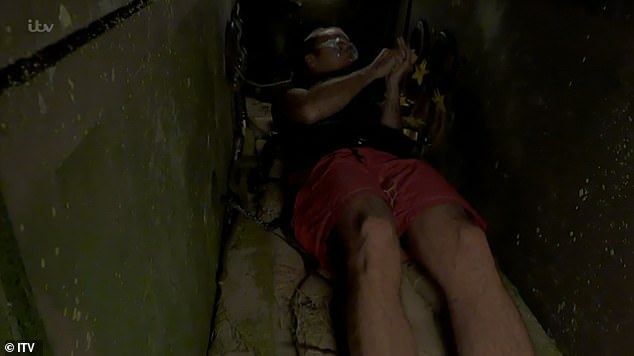 Another trial: Matt won a seven stars for camp during his sixth consecutive Bushtucker Trail during Monday’s I’m A Celebrity … Get Me Out Of Here!

Boy George, radio DJ Chris Moyles and comedian Babatunde Aleshe were all voted by the public to compete in the Angel of Agony, which will air on Tuesday.

Matt won seven stars for camp during his sixth consecutive Bushtucker Trail during Monday’s I’m A Celebrity… Get Me Out Of Here!.

During Deserted Down Under, the former Health Secretary, 44, said he had ‘no idea’ why viewers once again voted for him to take on the gruesome challenge. 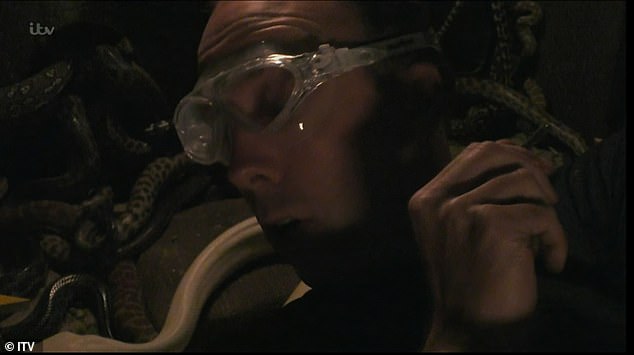 Not a clue: During Deserted Down Under, the former Health Secretary, 44, said he had ‘no idea’ why viewers once again voted for him to take on the gruesome challenge

He told hosts Ant McPartlin and Declan Donnelly: ‘There’s nothing I can do about it, I just throw myself at the Trial.’

The challenge saw Matt being buried alive for eleven minutes, during which he would have to retrieve keys to unlock eleven stars.

The West Suffolk MP has faced backlash from viewers after reportedly earning £400K for his appearance while parliament is still in session. 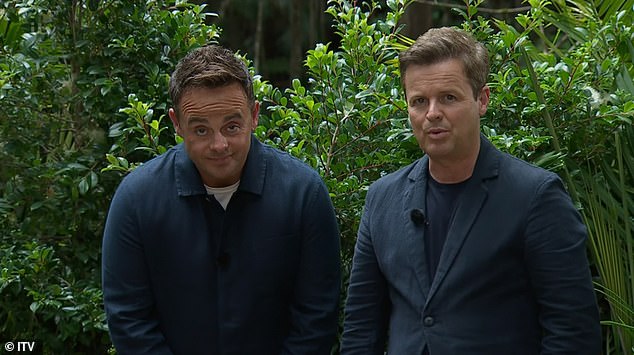 SIXTH trial: He told hosts Ant McPartlin and Declan Donnelly: ‘There’s nothing I can do about it, I just throw myself at the Trial’

And in true I’m A Celeb style, he was joined by insects and critters as well as a selection of snakes – his worst fear – during his sixth consecutive gruesome trial.

Viewers watched as he forced to reach his arms into small holes to search for the keys but struggled at first.

Seemingly horrified by his companions, he called out: ‘Something’s going up my leg! It’s inside my shorts.’ 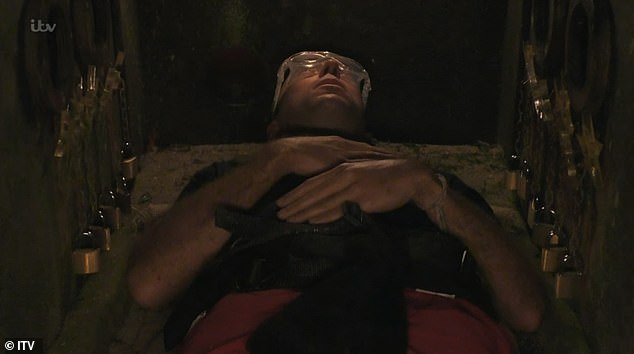 Scary: The challenge saw Matt being buried alive for eleven minutes, during which he would have to retrieve keys to unlock eleven stars

The lights then cut out and Matt was forced to complete the rest of the challenge in total darkness.

And the Tory MP appeared less than impressed at the end of trial when he was told he had bagged seven out of a possible eleven meals for camp.

He said: ‘I just managed to keep really calm. I had to be gentle with them [the snakes] but they were fine.’

He added: ‘My biggest fear [was snakes]. I kind of feel like I’ve faced that. I’ve conquered a fear.’

I’m A Celebrity 2022: All you need to know about this year’s show