Jennifer Lopez and her beau Ben Affleck were seen reuniting on Sunday after spending time apart in recent days due to their busy schedules.

The 52-year-old Hustlers star and the 49-year-old actor-turned-director looked affectionate as they held hands on their way into a screening of his new film The Tender Bar, which was held at the Pacific Design Center in West Hollywood.

Also spotted at the screening was Ben’s friend and Jennifer’s former costar George Clooney, who directed the movie. 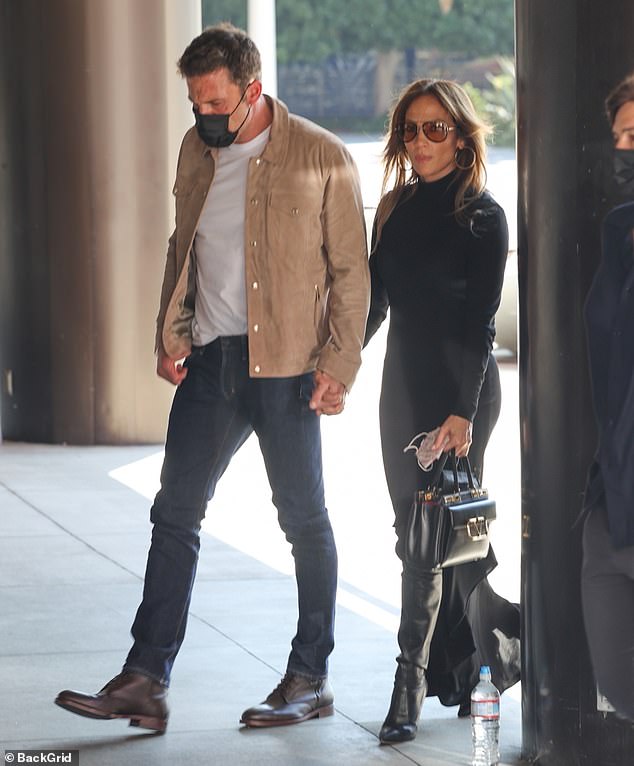 Although she’s a master of catching attention with her sizzling ensembles, Jennifer appeared to have toned down her usually color looks so as not to steal Ben’s spotlight.

She wore an all-black dress that hugged her curves and featured long sleeves and a thin skirt that almost touched the ground and fluttered in the breeze.

The Maid In Manhattan star had her caramel-colored locks feathered to reveal her gold hoop earrings, and she blocked out the sun with a stylish set of gold-tinted aviator sunglasses.

She accessorized with a black accordion-shaped Valentino handbag and a large white Hermès Birkin bag, though she seemed to have handed that off to an aide. 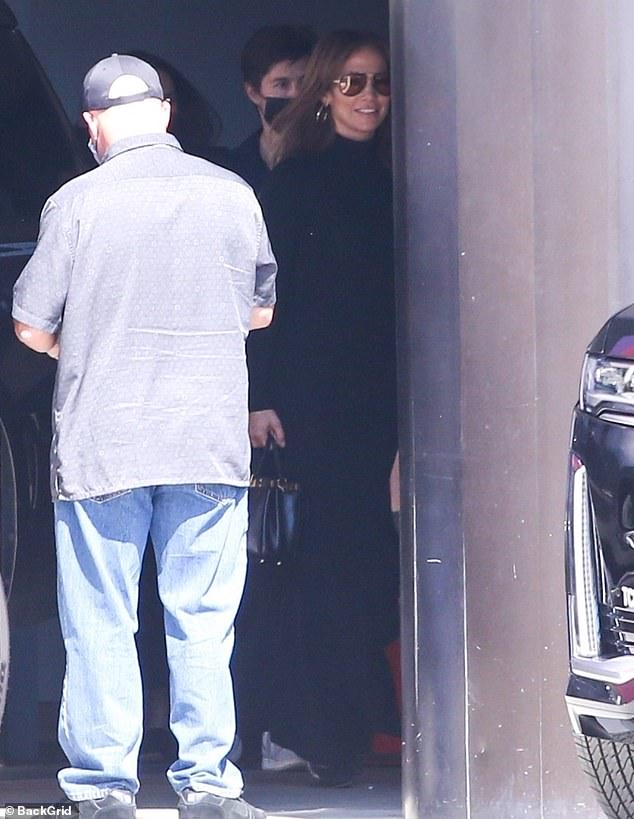 Muted looks: Although she’s a master of catching attention with her sizzling ensembles, Jennifer appeared to have toned down her usually color looks so as not to steal Ben’s spotlight 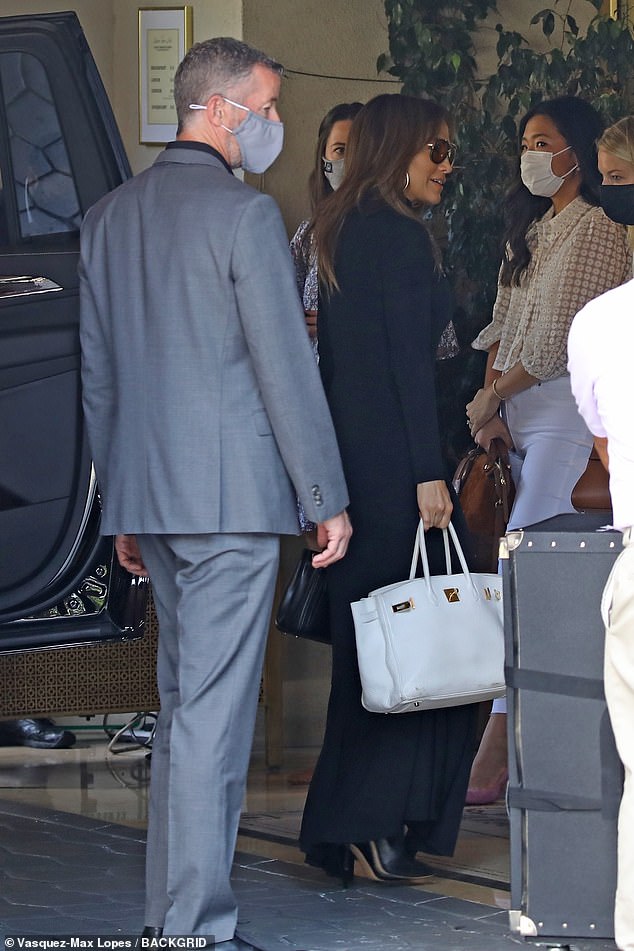 Back in black: She wore an all-black dress that hugged her curves and had a high slit to show off her ruffled black boots

Ben looked casual and cool as he stepped out of a black SUV while carrying a beverage, though he seems to have departed from his usual order in favor of black iced coffee.

He rocked a simple white T-shirt under a stylish tan suede jacket with silver buttons, as well as slim-fit dark jeans with brown boots.

Both he and J.Lo observed Los Angeles County’s mask mandate and brought along face coverings for when they stepped inside.

The two lovebirds kept their hands locked as they entered the building.

Looking good: Ben looked casual and cool as he stepped out of a black SUV while carrying an iced coffee. He rocked a simple white T-shirt under a stylish tan suede jacket with silver buttons, as well as slim-fit dark jeans with brown boots 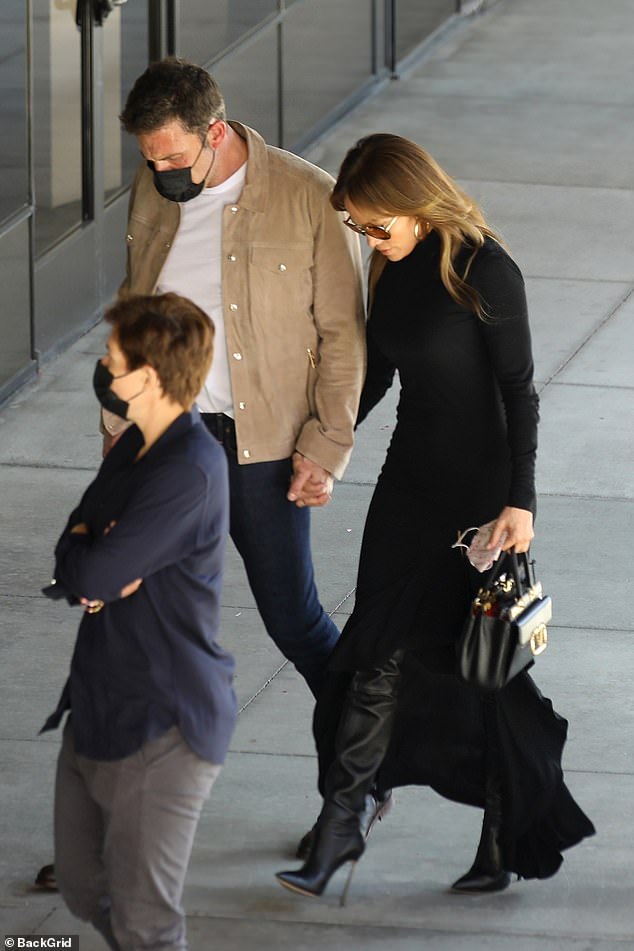 Safety first: Both he and J.Lo observed Los Angeles County’s mask mandate and brought along face coverings for when they stepped inside

Also spotted at the screening was Ben’s old pal George Clooney, who produced his film Argo and directed him in The Tender Bar

The Oscar winner looked even more casual than his friend in a navy polo shirt with baggy jeans and gray shoes, though he added a luxury wristwatch for some extra flair.

The actor and director is also a former costar of Jennifer, as the two led the romantic crime classic Out Of Sight from 1998.

Clooney starred as a bank robber recently escaped from prison, while Lopez played the US Marshal who finds herself drawn to him even as she tries to send him back to prison.

Affleck stars with Tye Sheridan, Lily Rabe and Christopher Lloyd in The Tender Bar, which has been described as a ‘coming-of-age film.’

Sherdian stars as J. R. Moehringer, the novelist and journalist who wrote the memoir the film is based on.

In the film, he bonds with his bar tender uncle (Affleck) as a substitute for his absent father, who left when he was just a baby. 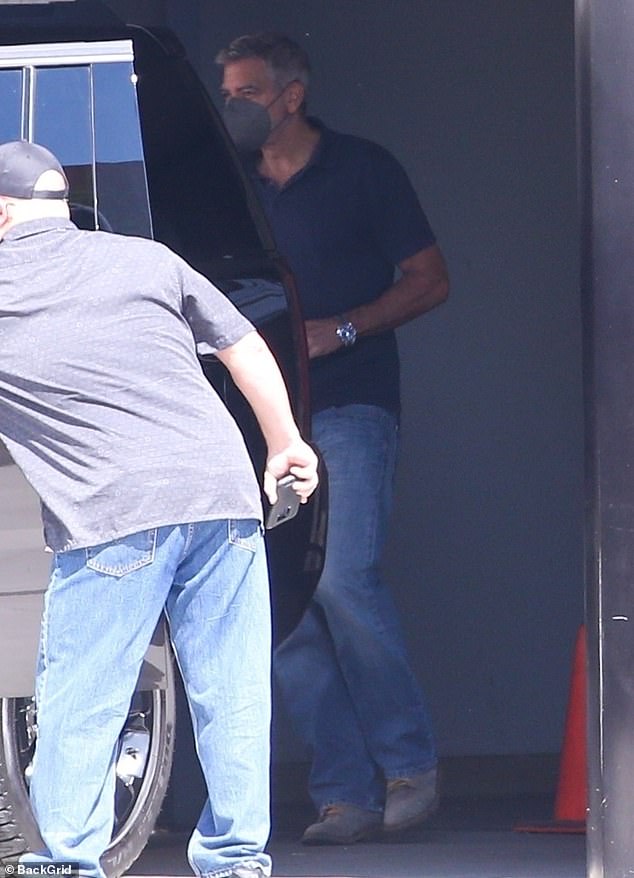 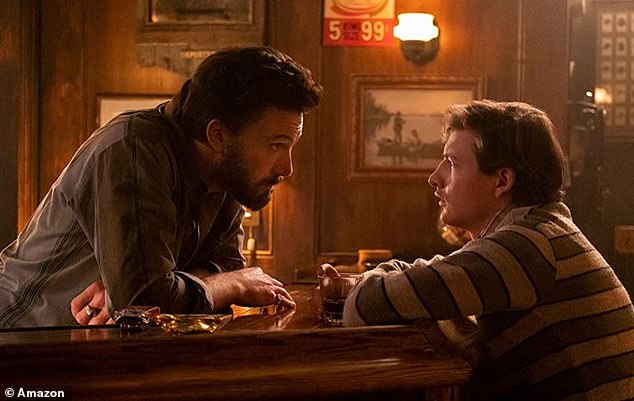 Autobiographical: Clooney’s film The Tender Bar is based on J. R. Moehringer’s memoir about seeking a father figure in his bar tender uncle (played by Affleck); pictured with Tye Sheridan (R)

Ben filmed The Tender Bar from February through April of this year.

According to TMZ, he got back in touch with Jennifer in February while he was filming and began sending her ‘loving and longing’ emails while she was on set filming.

It’s unclear if she and her former fiancé Alex were together at that time, or just keeping up appearances, but she continued responding back and forth through the duration fo the shoot.

In April, Ben was seen driving to a hotel, only to be picked up in Jennifer’s SUV and taken to her home in LA for them to spend time together. 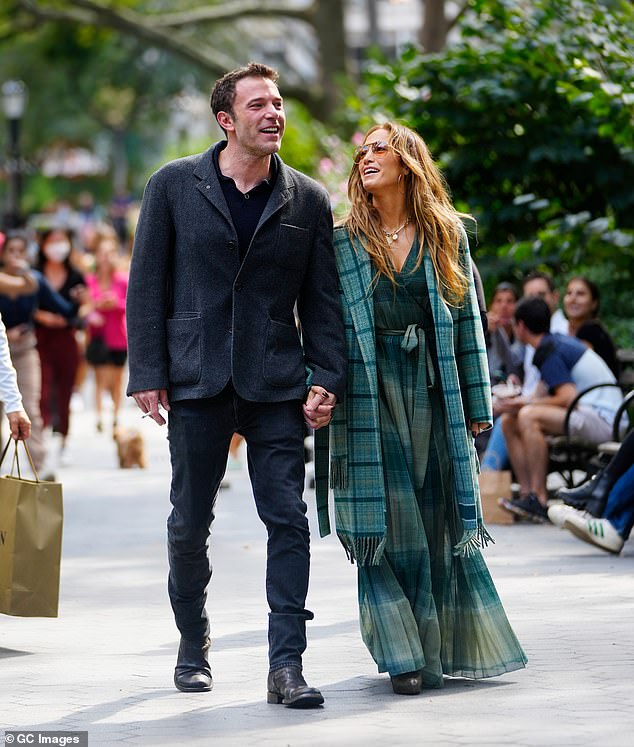 Work romance: Ben got back in touch with Jennifer via email back in February as he filmed The Tender Bar, though she was still engaged to Alex Rodriguez at the time; seen in New York City on September 26

The two kicked things up a notch in May with a week-long trip to snow Montana, and then followed that one up with another trip to Miami, where she and her family were based at the time.

It wasn’t until June that the renewed lovers were spotted kissing at a birthday party for Jennifer’s sister Lynda Lopez.

They repeated the gesture in a steamy set of photos in June to mark the singer’s 52nd birthday.

In recent weeks the couple have been seen touring houses around Los Angeles, and Jennifer’s kids are reportedly comfortable with Ben and up for a move back to the West Coast.

The couple had previously dated in the early 2000s and had been engaged from 2002 until early 2004, before separating.