New mum Jess Wright wowed onlookers as she attended the Soccer Aid After Party held at The Nobu Hotel in London’s Marylebone on Sunday night, just a month after giving birth to her son Presley.

The former TOWIE star, 36, whose brother Mark had competed in the charity football match earlier that day, looked typically chic in a stone satin blazer and trousers, which she layered above a white top.

Meanwhile Christine McGuinness, 34, flashed her bronzed legs in a black miniskirt which she teamed up with a tight white tank top while toting her essentials around in a cream handbag.

Here come the girls! New mum Jess Wright (left) looked typically chic in a stone satin blazer suit while Christine McGuinness (right) flashed her bronzed legs in a black miniskirt at the Soccer Aid After Party held at The Nobu Hotel in London on Sunday

The Real Housewives Of Cheshire star kept things casual with a pair of black-and-white trainers while lugging a giant suitcase around with her.

Jess accessorised her ensemble with an oversized stone handbag while donning a pair of tan heels.

Love Island’s Kem Cetinay, who competed in the World XI team due to his Turkish Cypriot heritage, designed the players’ match day suits with Primark, worn by the likes of Liam Payne, Mark Strong, Damian Lewis and Mo Farah.

The Soccer Aid match, was eventually won by the World XI team on penalties, 6-5, and raised over £15 million for UNICEF, who help the world’s most disadvantaged children.

Out of this world: The former TOWIE star, 36, (left) whose brother Mark had competed in the charity football match earlier that day, didn’t disappoint with her trendy ensemble while The Real Housewives Of Cheshire star (centre) kept things casual with a pair of black-and-white trainers. Laura Whitmore (right) exhibited her pins in a gorgeous floral minidress and red heels 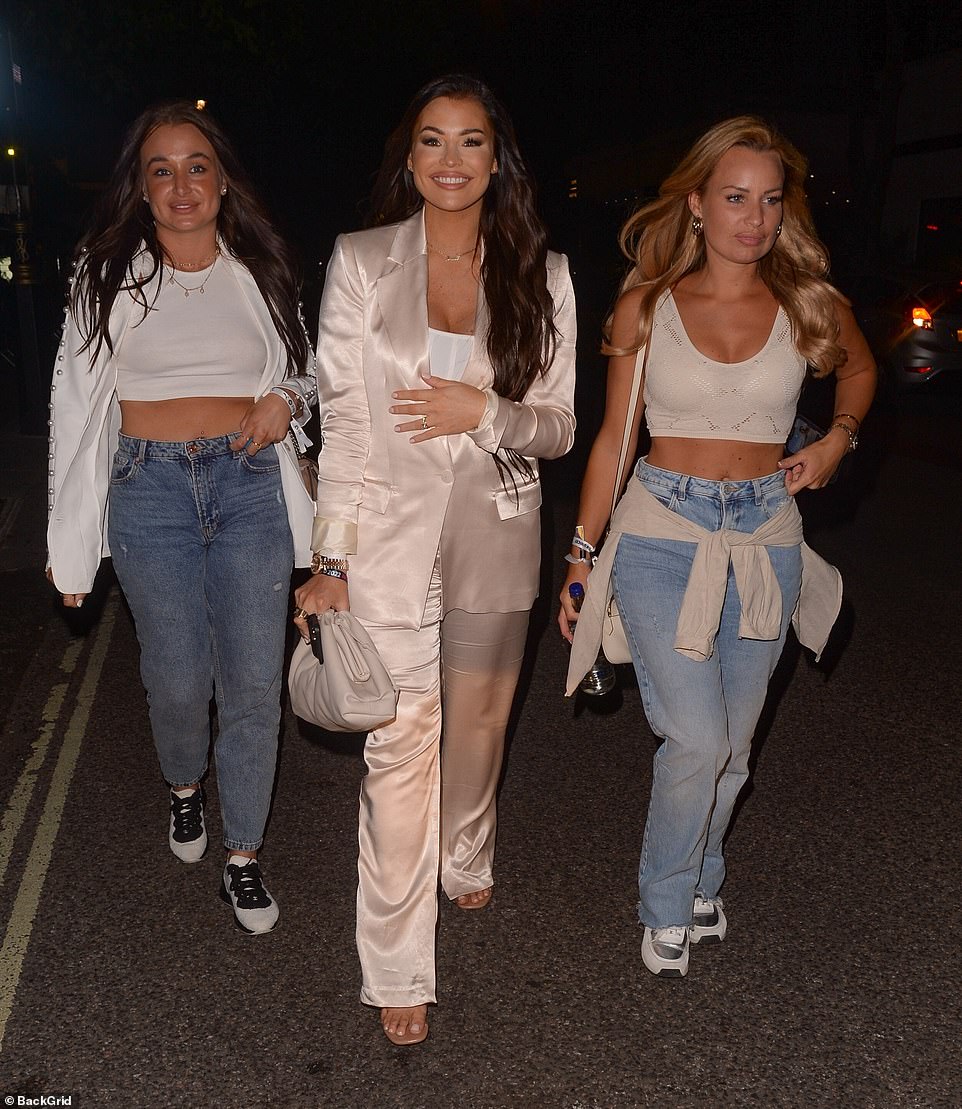 Wow! Laura wrapped up in a black leather jacket while clutching a matching handbag. Her glossy blonde tresses bounced over her shoulder 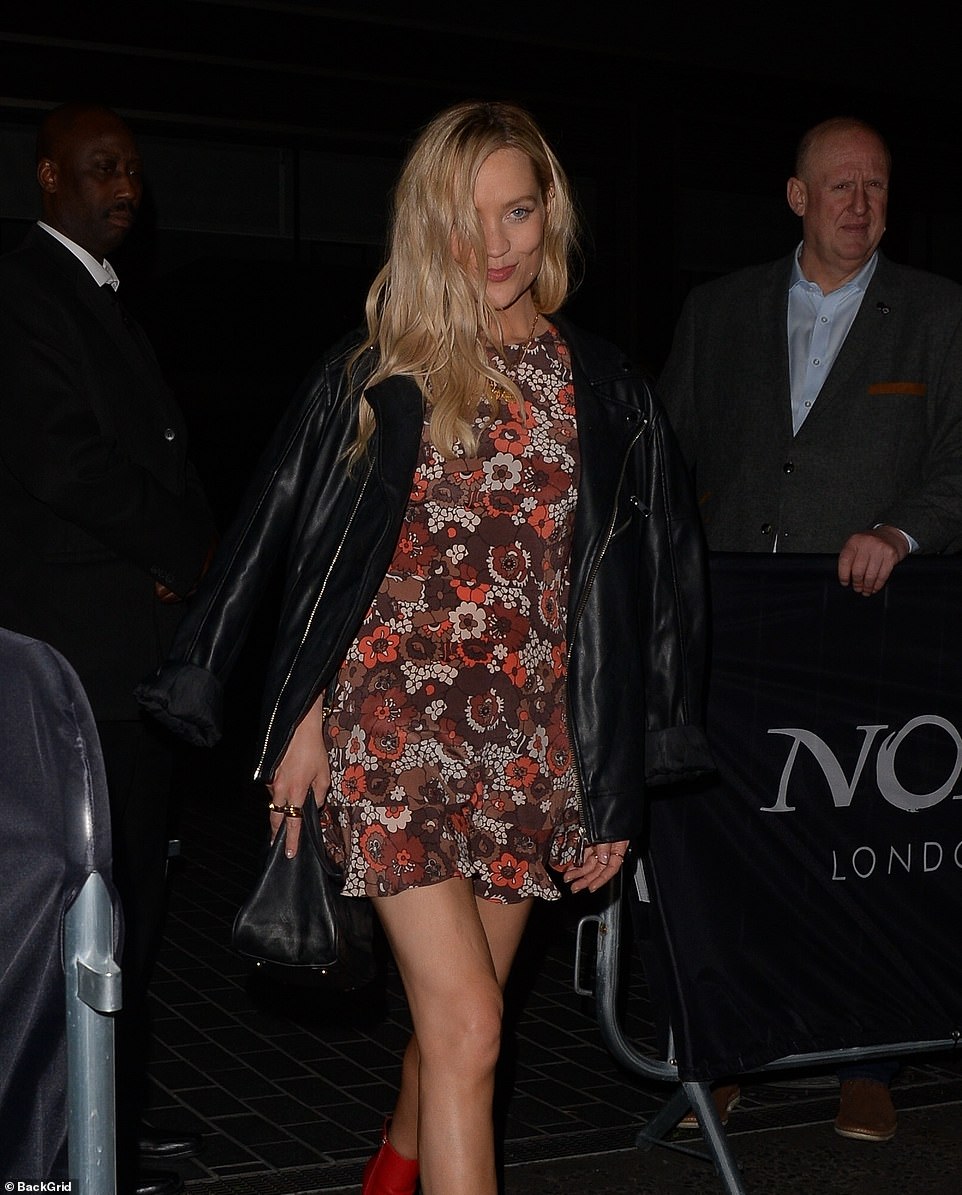 The event has raised over £60 million since its initial beginning in 2006, with 2021’s match raising a record-breaking £13 million.

Money acquired from this year’s game could help UNICEF provide vaccines, fight malnutrition, and provide safe spaces to protect children in times of crisis, helping kids get back to the childhoods they are entitled to.

Jess recently announced that her first child was delivered by emergency Caesarean section five days before her due date.

Jaw-dropping: Sabrina Elba commanded attention in a white minidress which she teamed up with a pair of eye-popping red tights and matching heels, while wrapping up in a black jacket 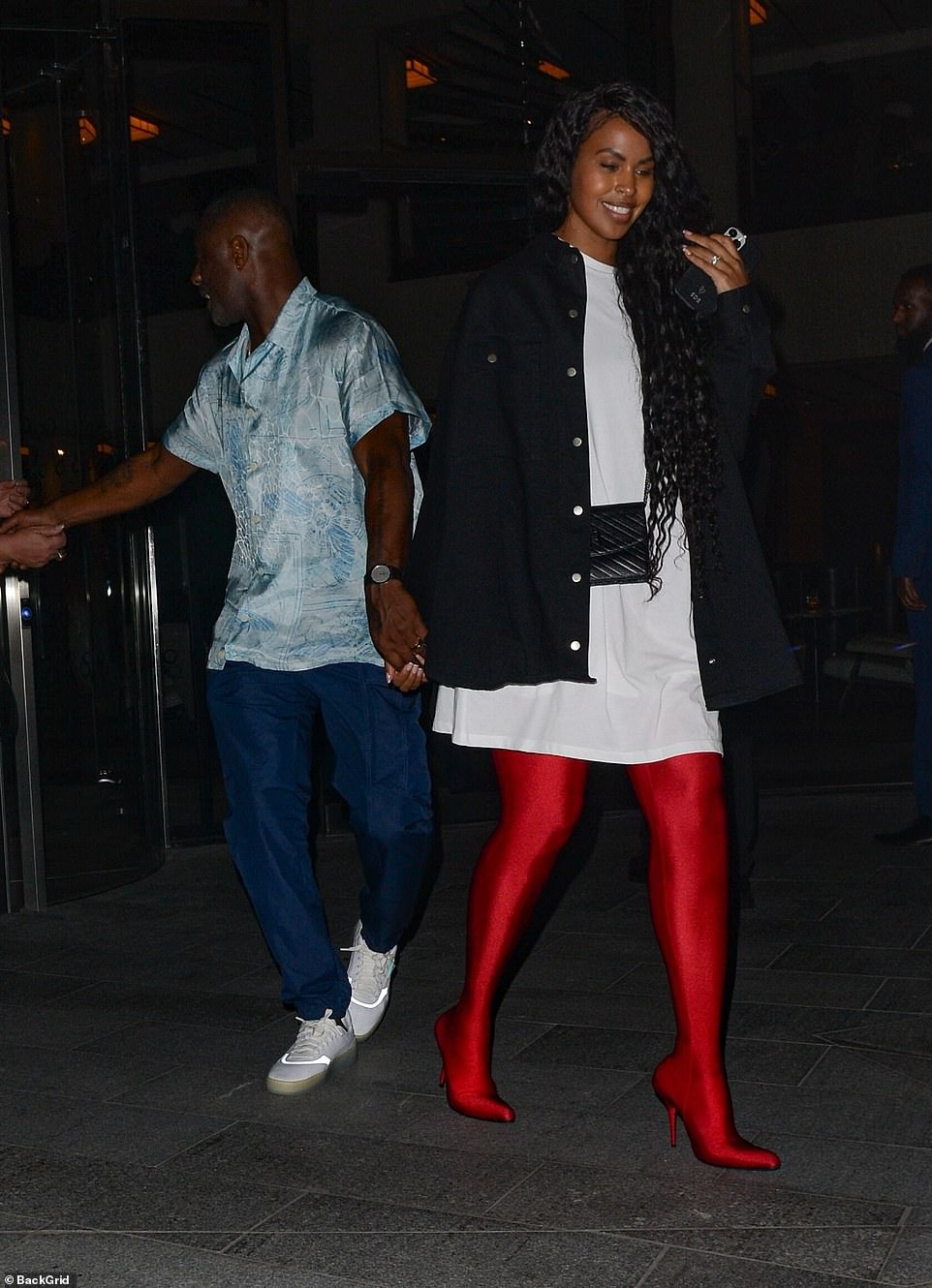 Couple: She was soon joined by her actor husband Idris who sweetly held her hand

Dapper: Liam Payne looked suave in a navy jacket and matching trousers which he teamed up with a white shirt 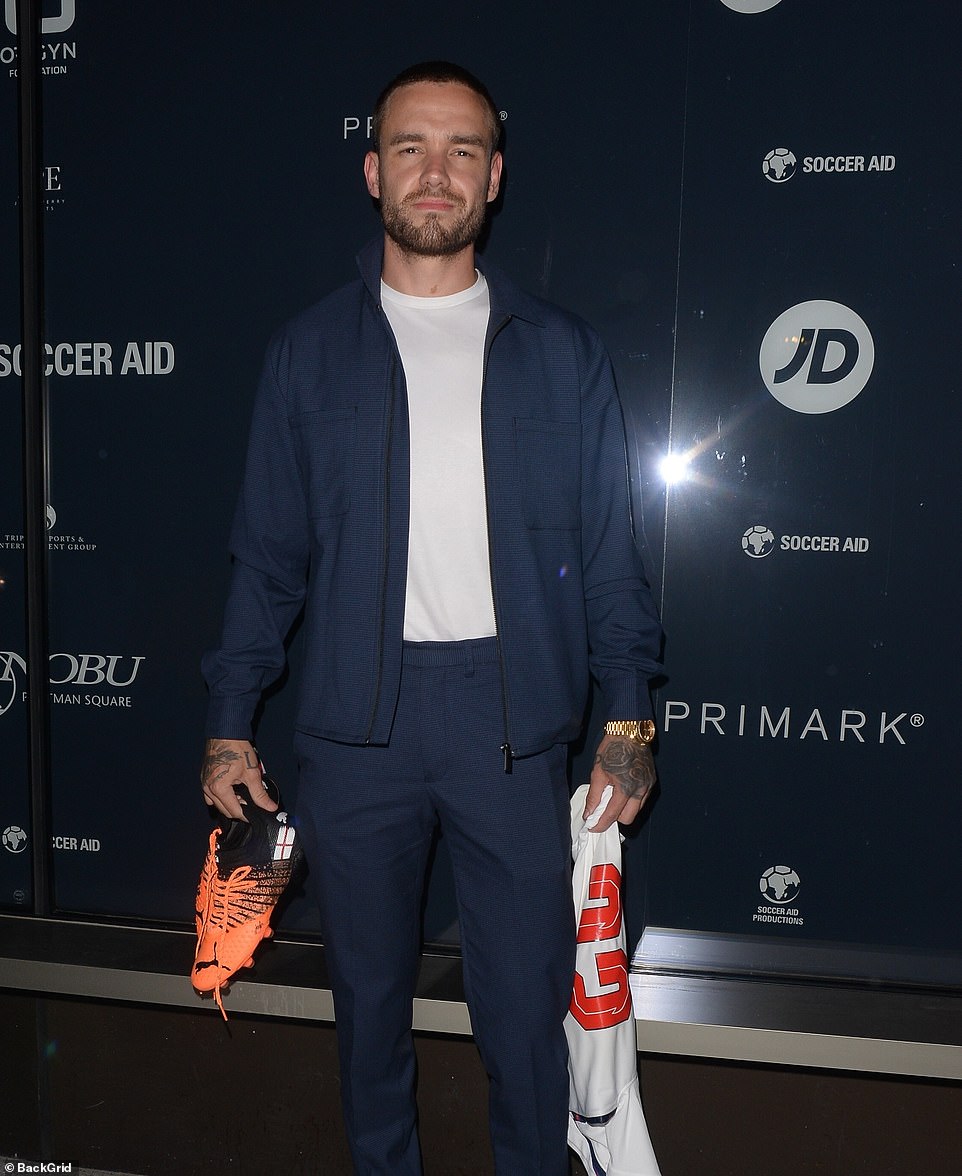 Looking great: Liam carried a pair of unmissable orange football boots and a white shirt as he posed for photographers

The TV personality had been ‘intent’ on having a natural birth, with her husband, 39-year-old businessman William Lee-Kemp, and Loose Women panellist mother Carol Wright by her side.

However, baby boy Presley was delivered by Caesarean section at London’s Portland Hospital on May 17, after Jessica noticed his movements had lessened.

She told Hello! magazine: ‘In those last few weeks he had been so active and then, all of sudden, it completely dropped, which was very scary, so our doctor told us to come straight to hospital.’

Here he is! James Argent arrived in a white shirt with brown pinstripes, which he combined with a pair of black trousers and leather loafers

Striking: Mark’s former TOWIE co-star soon changed into a black T-shirt with a Bowie print, while cutting a pair of eye-popping red trousers

Emerging: Jay Rutland wowed onlookers in a navy ensemble, which consisted of a polo shirt and blazer, along with suit trousers and slip on shoes

Spotted! Damian Lewis was dressed to impress in a blue jacket, T-shirt, and trousers, along with a pair of white trainers

Medics tried for 48 hours to induce the birth, and Jessica said: ‘They monitored him again and found his heart rate was dropping slightly.

‘They thought he might be lying in an awkward position, so the sensible decision was to have an emergency C-section and get him out quickly.

‘I had been so intent on having a natural birth and to go through that experience as I’d done all the hypnobirthing, but I had a sense of “this is our destiny, this is how it is supposed to happen”, and we accepted it, and then got excited that it was happening so quickly. 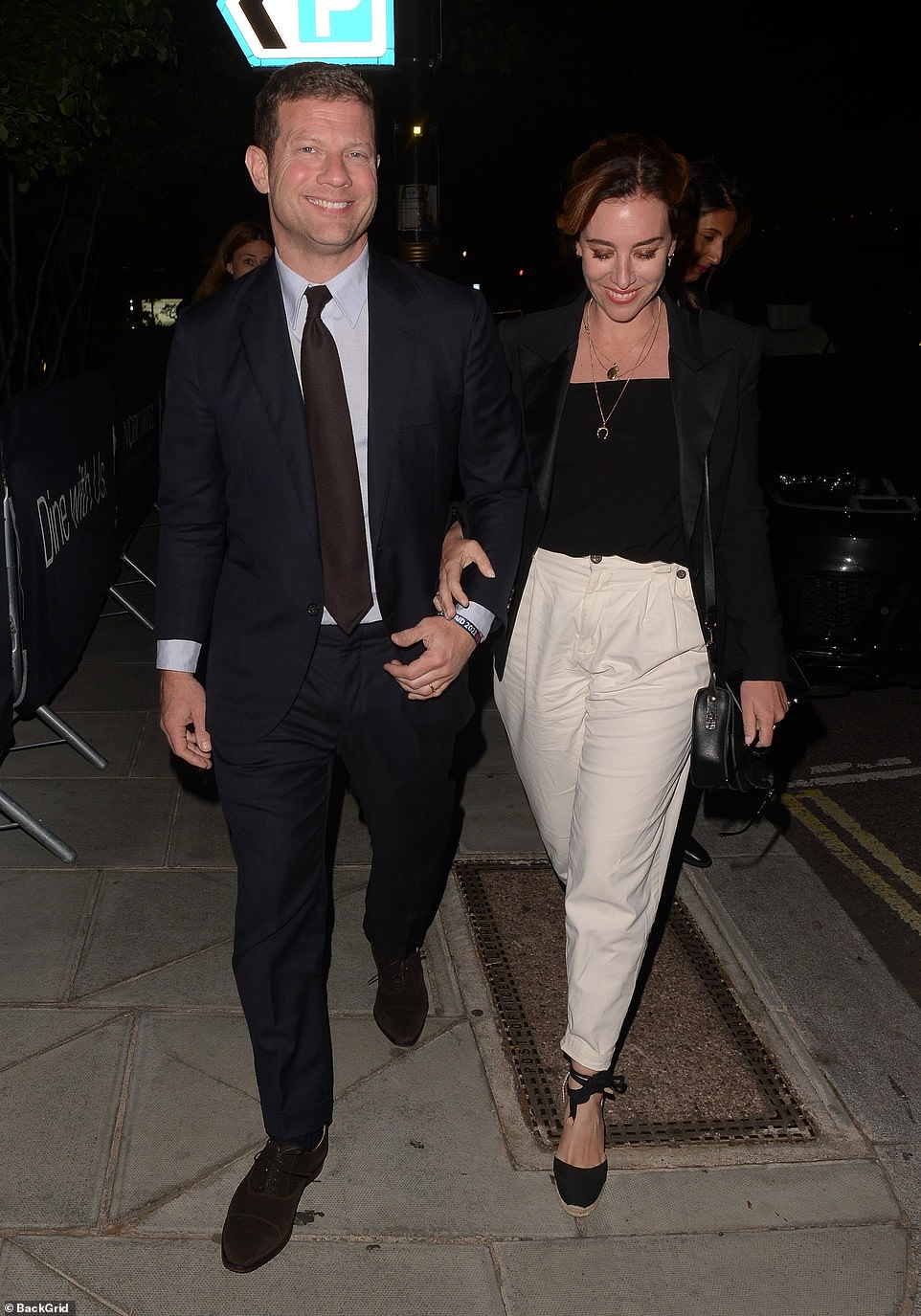 Loved-up: Dermot O’Leary and his wife Dee Koppang adorably linked arms as they made their way to the exclusive hotel 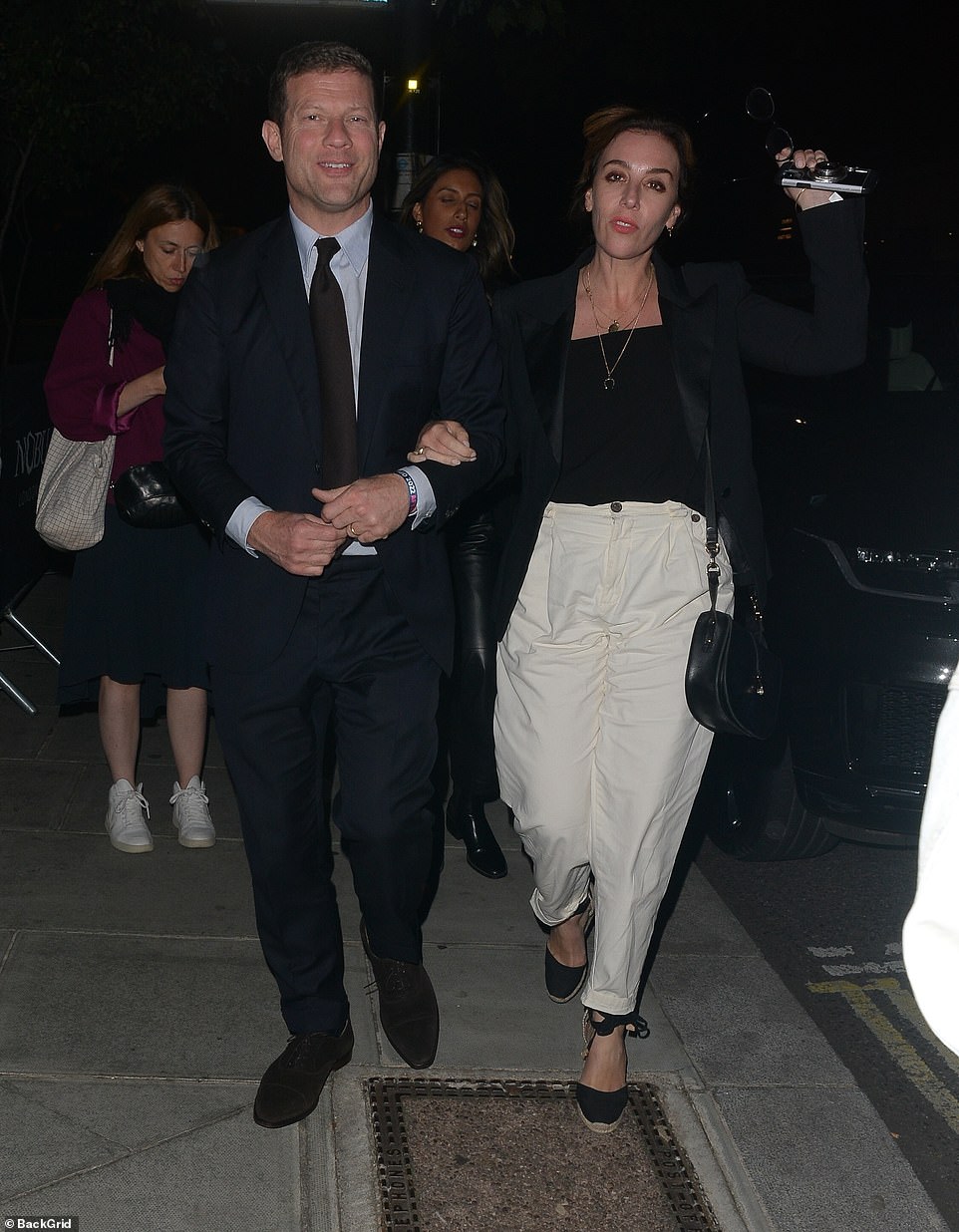 Sweet: The former X Factor presenter appeared to be enjoying the company of his film producer partner 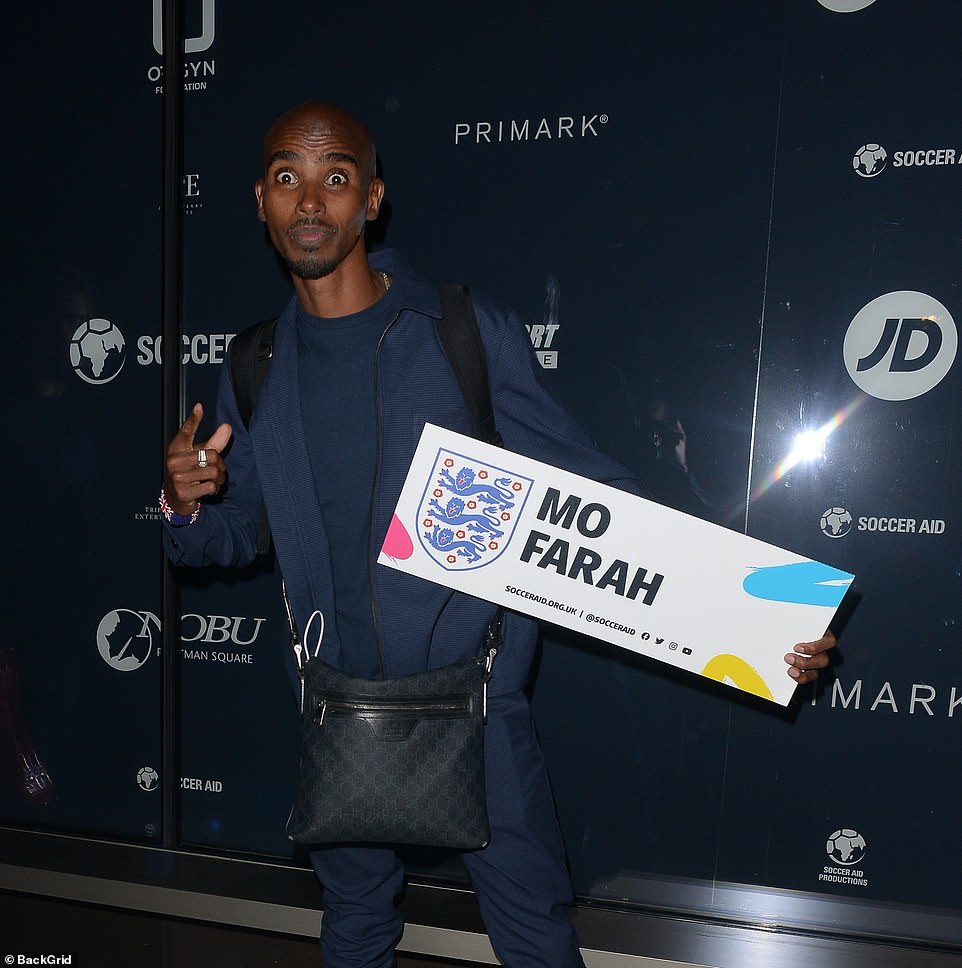 Accessorising: The Olympic athlete threw a grey Louis Vuitton man bag over his torso and pointed towards the camera 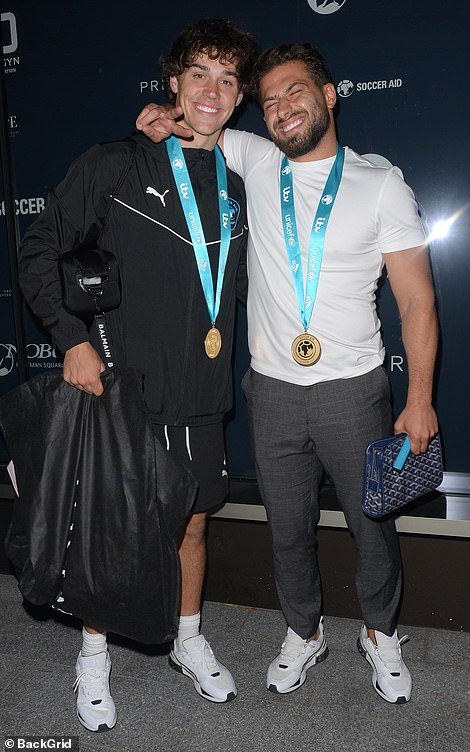 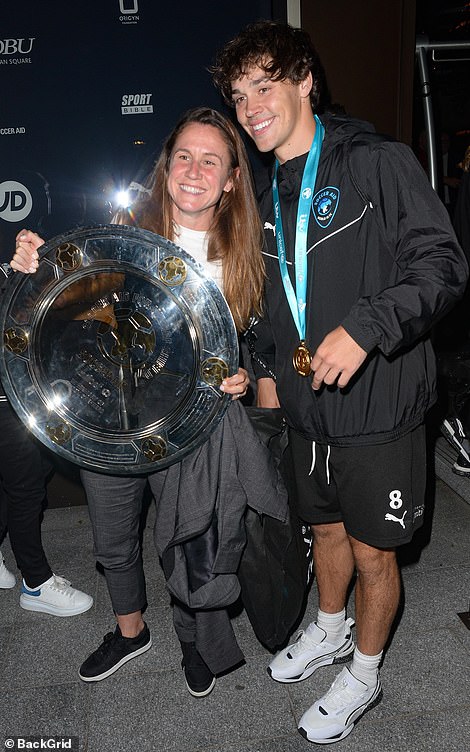 ‘I felt like I had to be strong and positive and embrace it, rather than going in there panicking. It was the most incredible, surreal, overwhelming experience ever.’

Jessica revealed the couple had chosen the name Presley months before their son was born.

‘I heard the name from someone when I was eight weeks pregnant, and I said to Will, “We’ve found the name”, and he loved it. 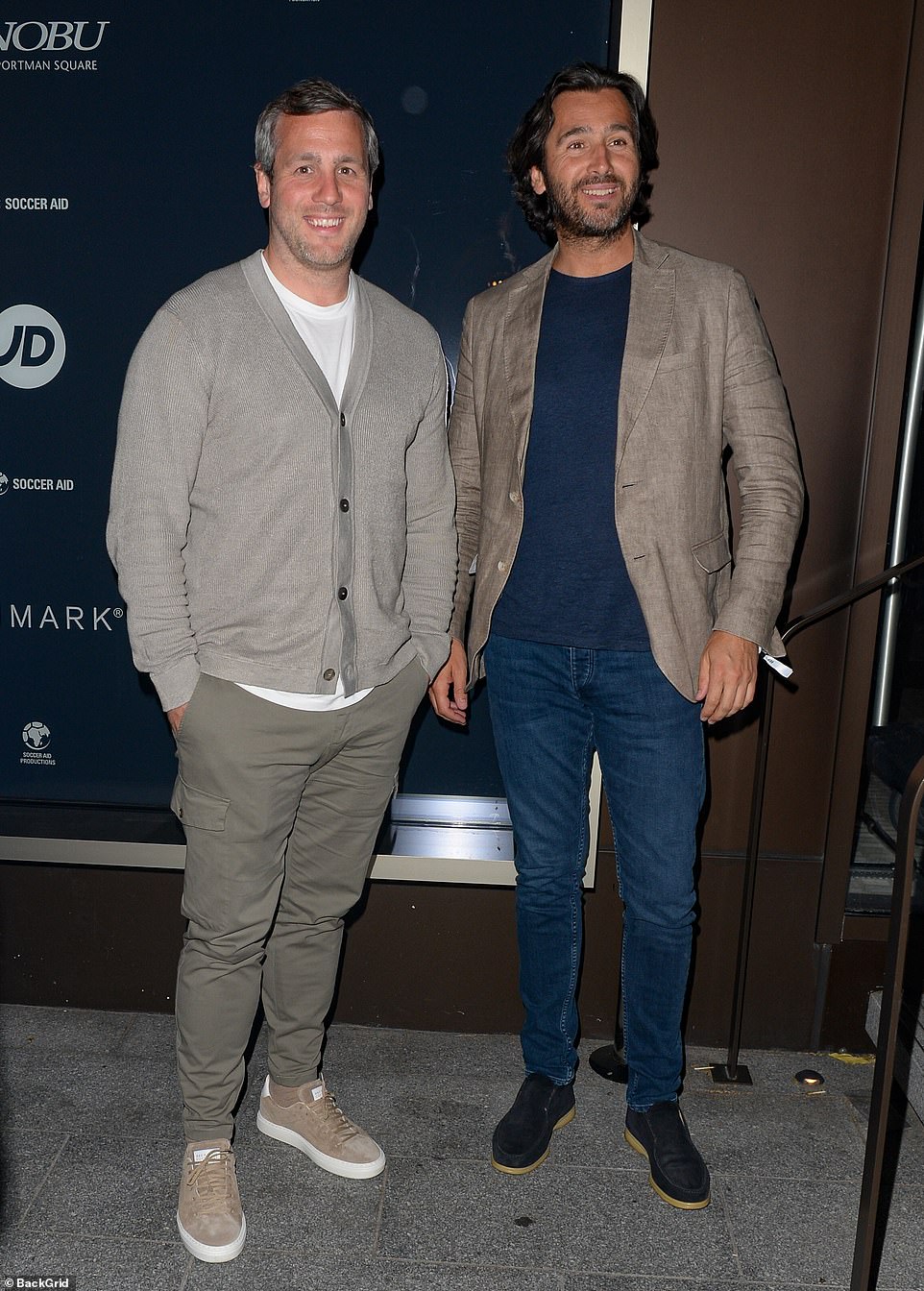 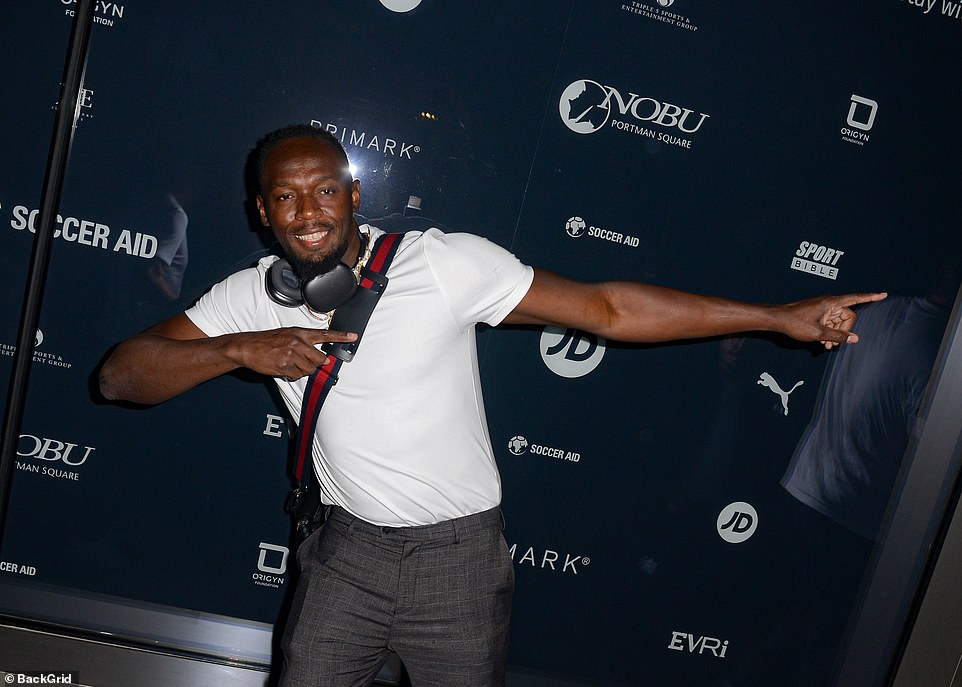 Funky: He’d been blasting his favourite tunes through a pair of oversized black headphones and Vicky McClure wore an eye-popping red sports jacket

Low-key: Vicky McClure changed into a casual light blue silk shirt and rolled-up faded jeans. Angus Deayton (centre) looked suave in a pair of cream trousers and a black shirt and Mark (right) certainly had a handful with a collection of bags

‘We had a couple of names since then, but that one seemed to suit him best.’

Speaking about her son’s middle name, Stone, Jessica said: ‘We both really love it as it’s so different.’

She added that becoming a mum had been a ‘whirlwind’ but it was ‘amazing’. 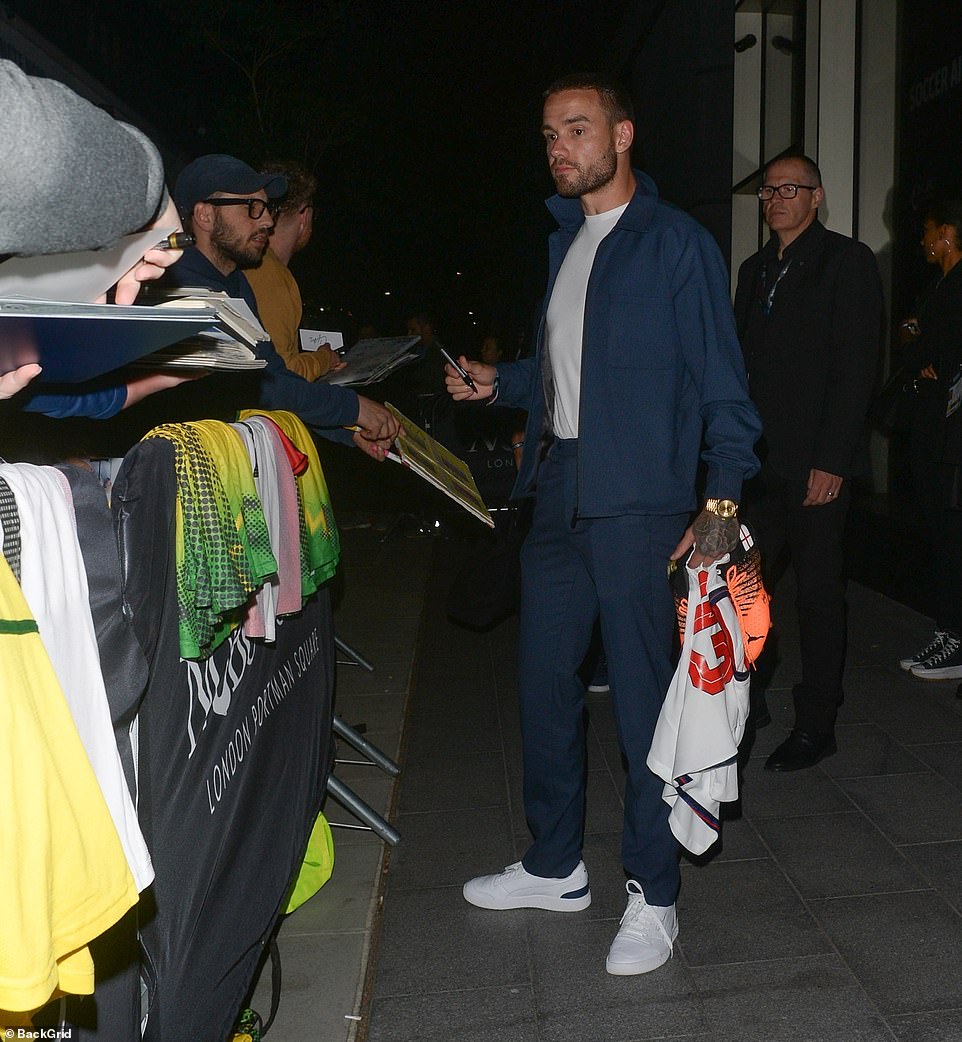 Devotees: Liam appeared to be in his element as he signed autographs for fans, who had patiently waited outside the venue 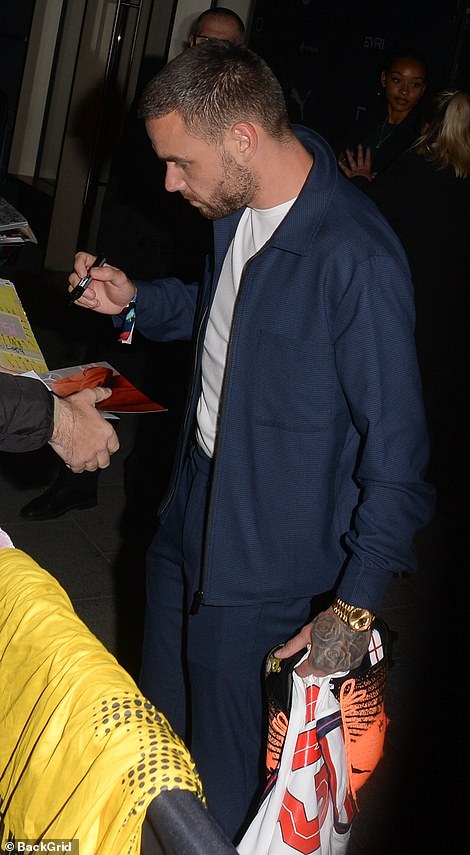 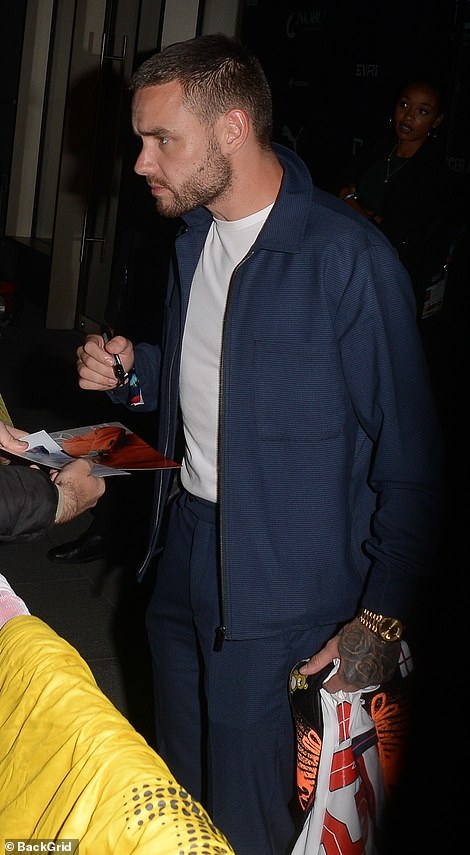 Wowee! The devotees held out pictures for the singer to brand with his autograph 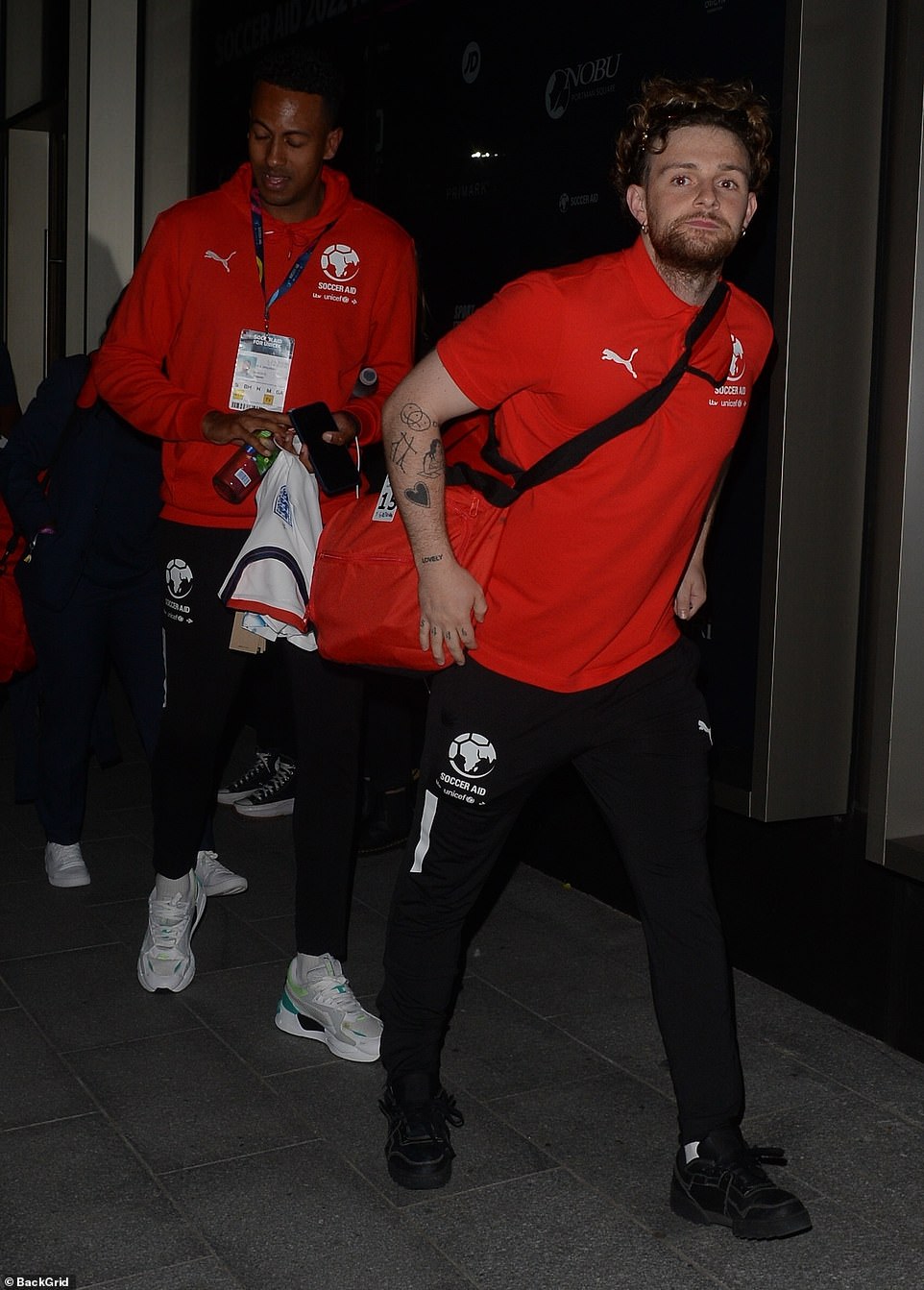 Emerging: Tom Grennan was joined by a teammate as they explored the city 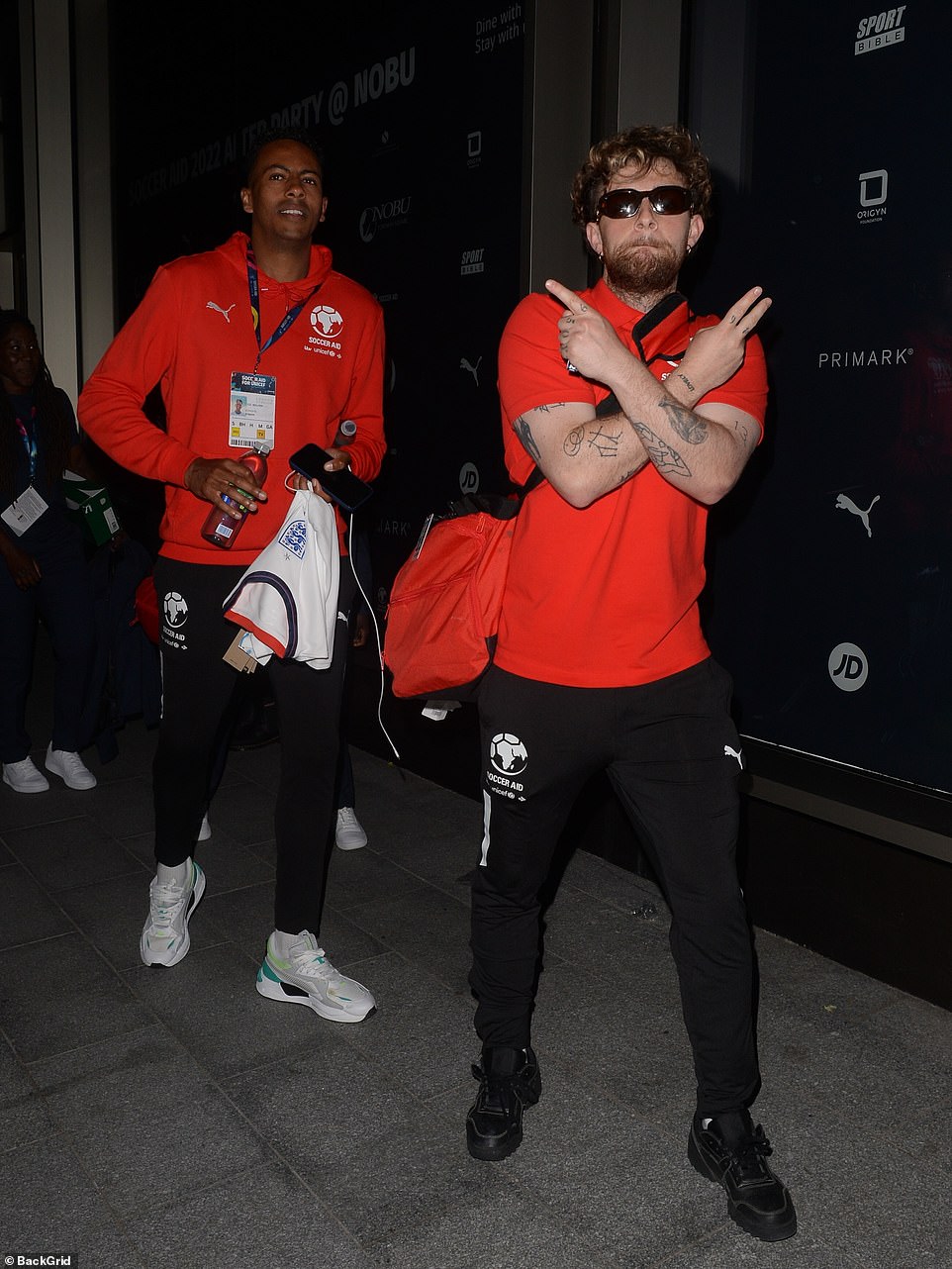 Cheeky: Tom crossed his arms as he posed for cameras before entering the swanky hotel

Cute: Teddy Sheringham was joined by his beautiful wife Kristina Andrioti for photos. He wore a navy ensemble and white trainers

‘It is such an intense, crazy time having your first child and not knowing what to expect. We are learning more every day,’ she said.

‘What we have taken from the first few weeks is that there is no set routine, there are no set rules. You learn as you go along.’

The reality star said her TV and radio presenter brother Mark Wright, who was also on TOWIE, ‘loves being an uncle’ but his wife, actress Michelle Keegan, has not met Presley yet as she is filming in Australia. 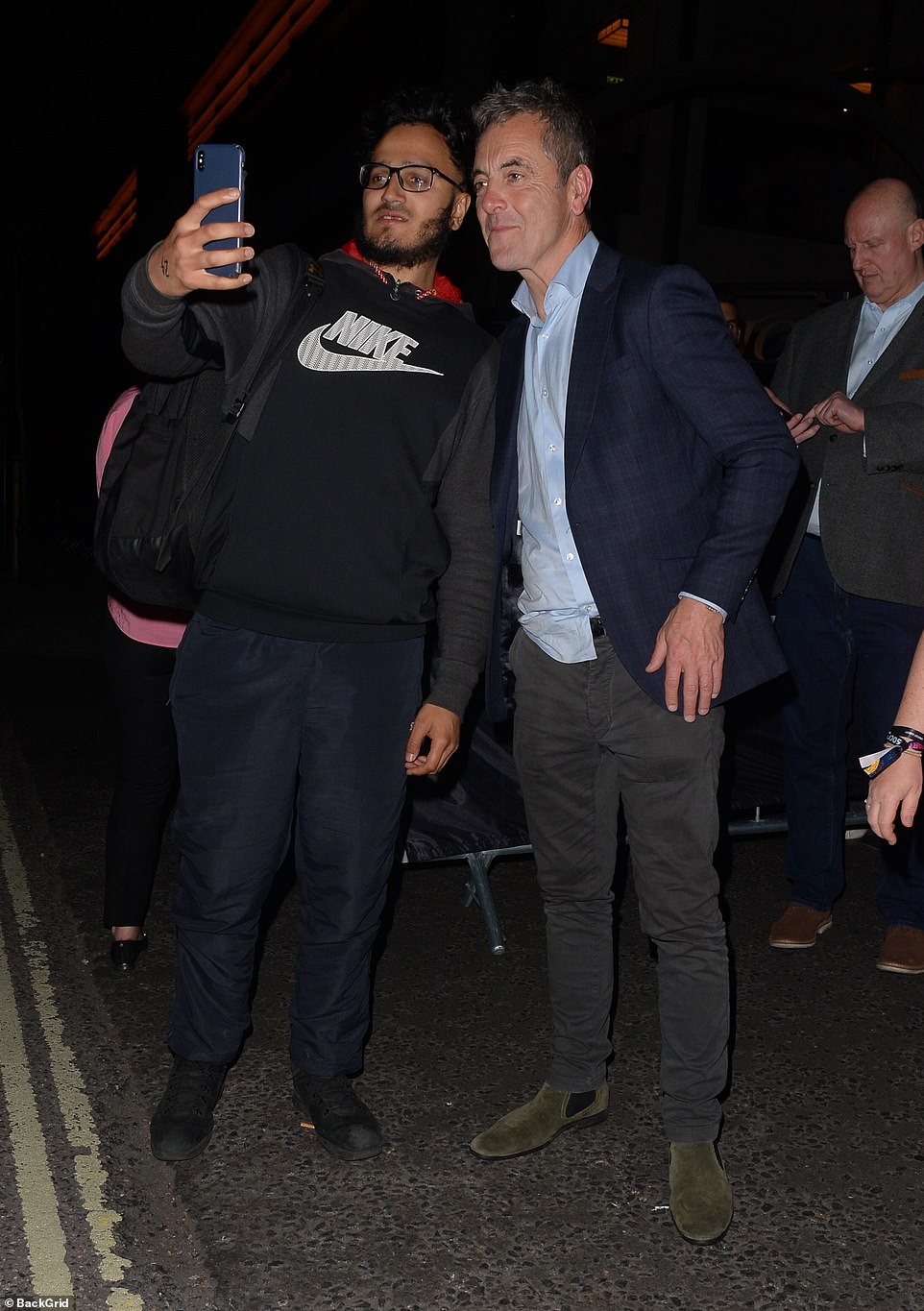 All smiles: James posed for selfies with a devotee, who wore a black Nike hoodie 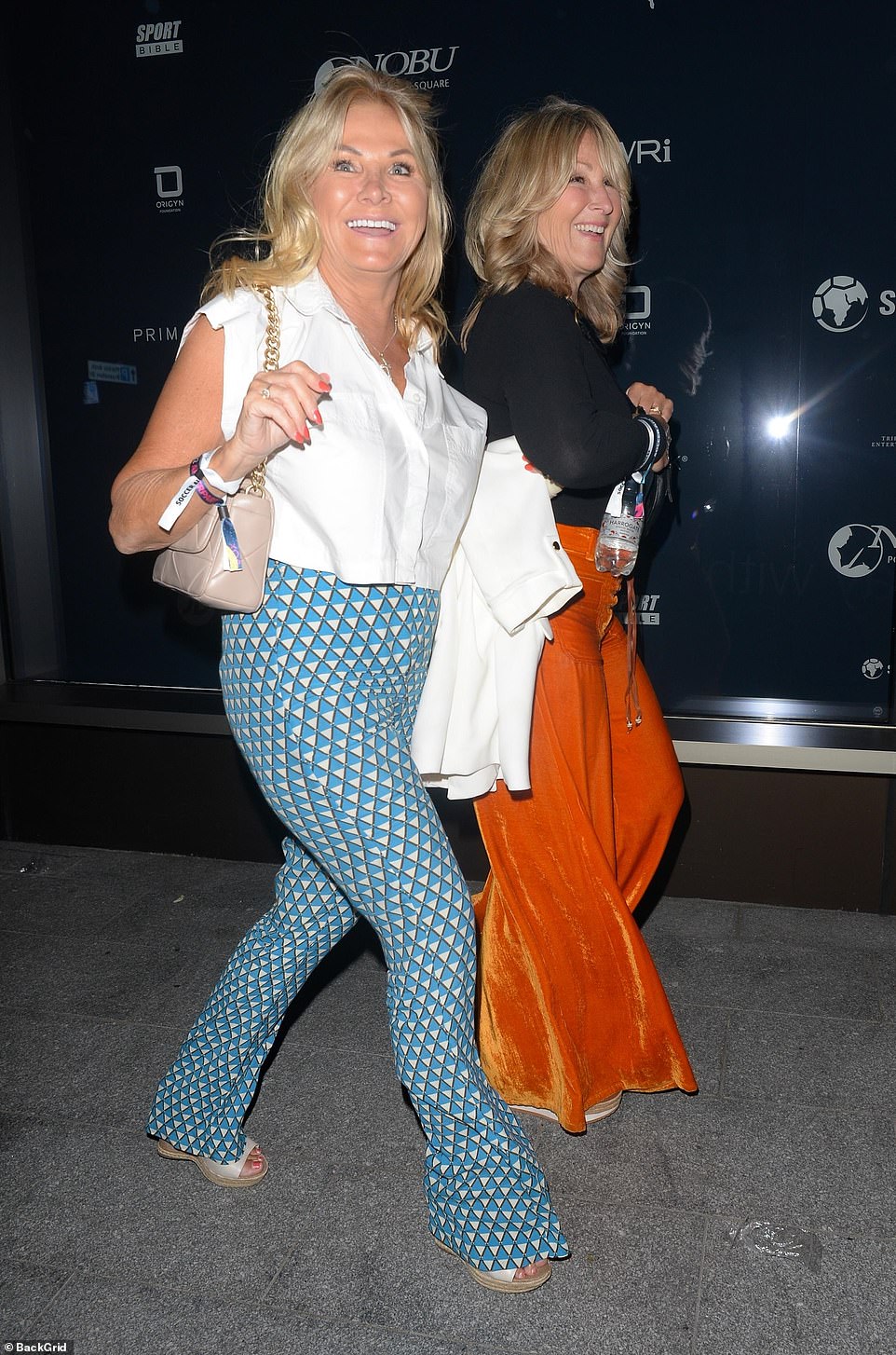 Family: Mark’s mum Carol (left) was joined by a friend as they made their way into the hotel too

Jessica announced in November she was pregnant with her first child after marrying William in Majorca in September.

She has previously revealed the couple discovered she was expecting during their wedding celebrations.

They married in a lavish ceremony on the Spanish island – followed by a poolside reception and a banquet in a castle – which was broadcast on ITVBe. 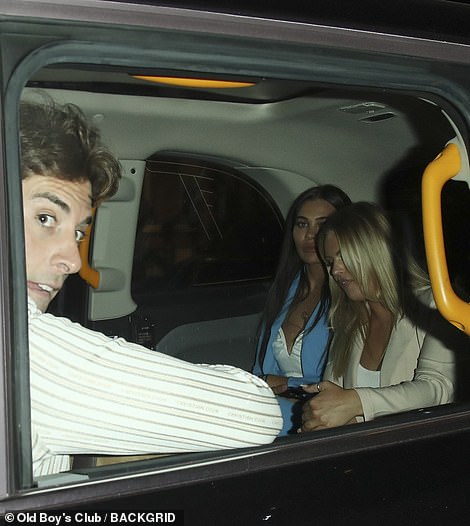 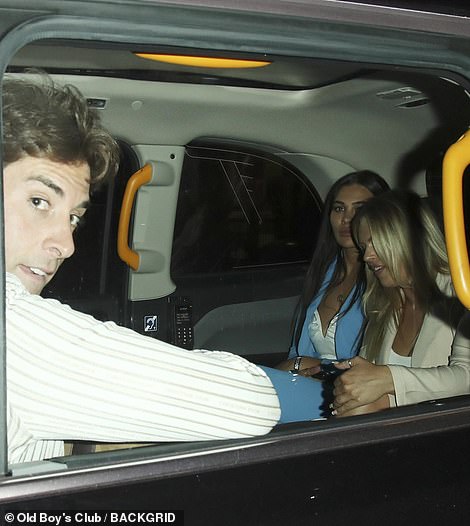 Ladies: TOWIE’s Arg climbed into a taxi with a group of stunning girls before whizzing off back to Essex 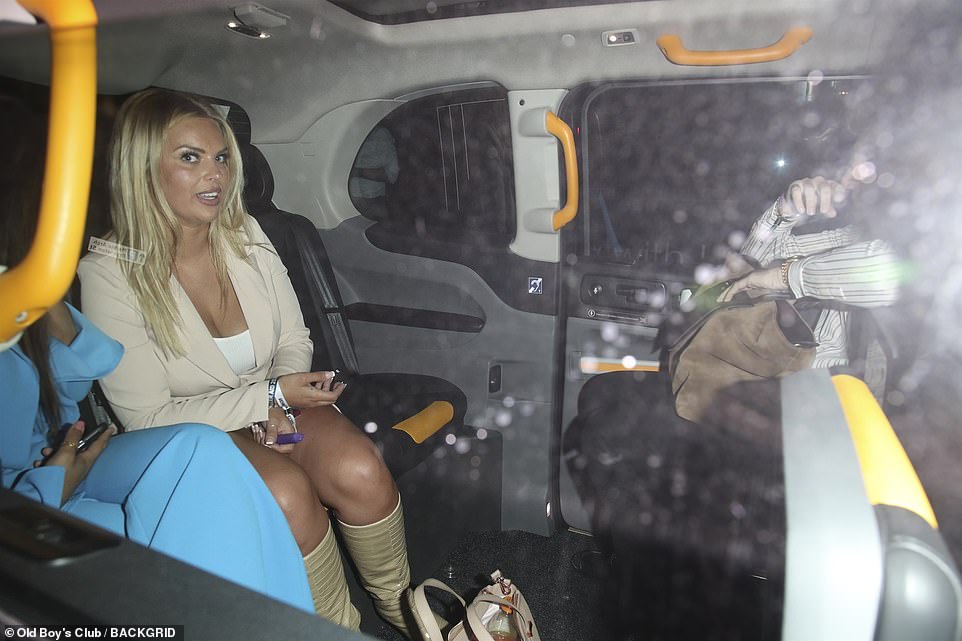 Hot stuff: One blonde bombshell flashed her bronzed legs while wearing a pair of knee-high boots 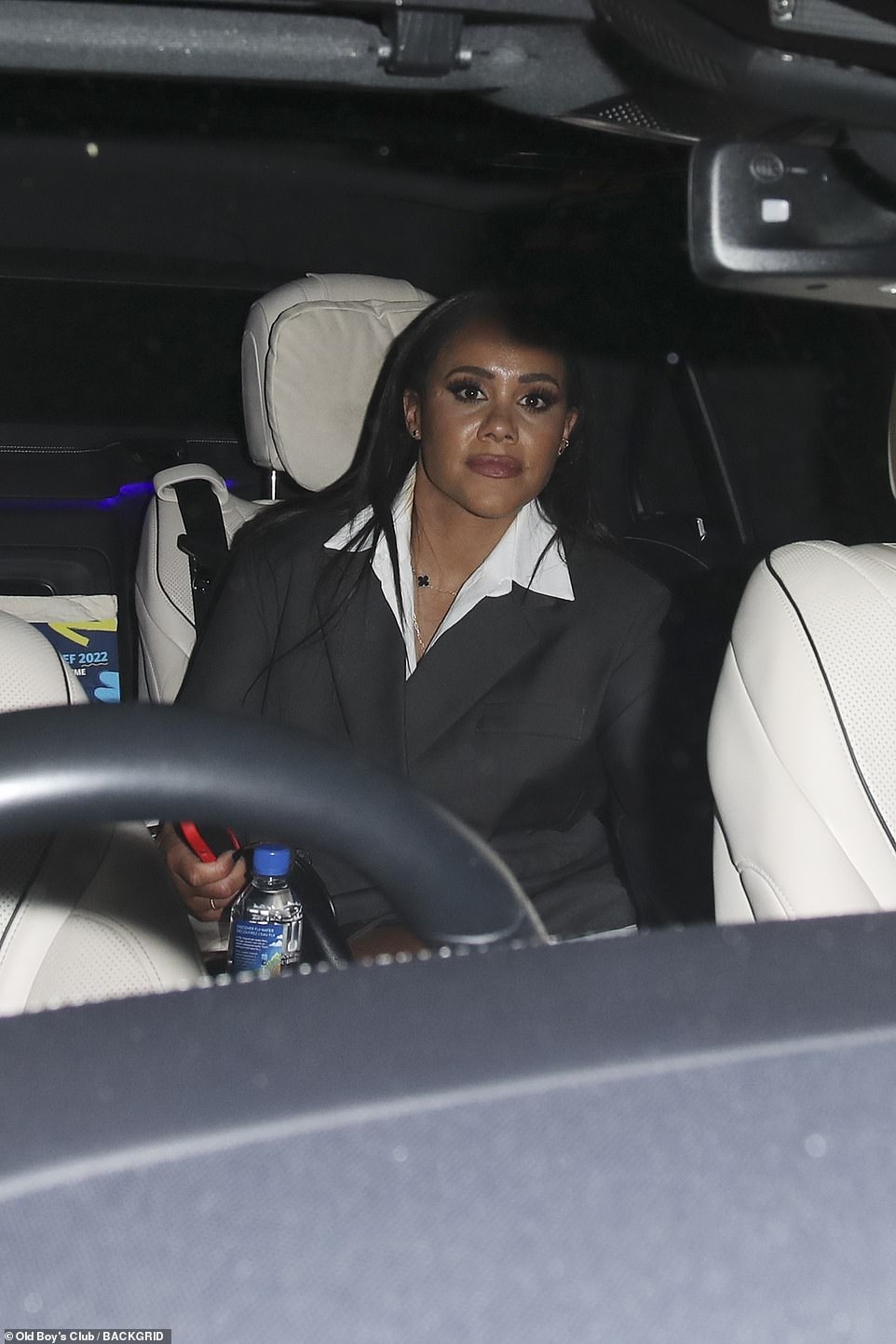 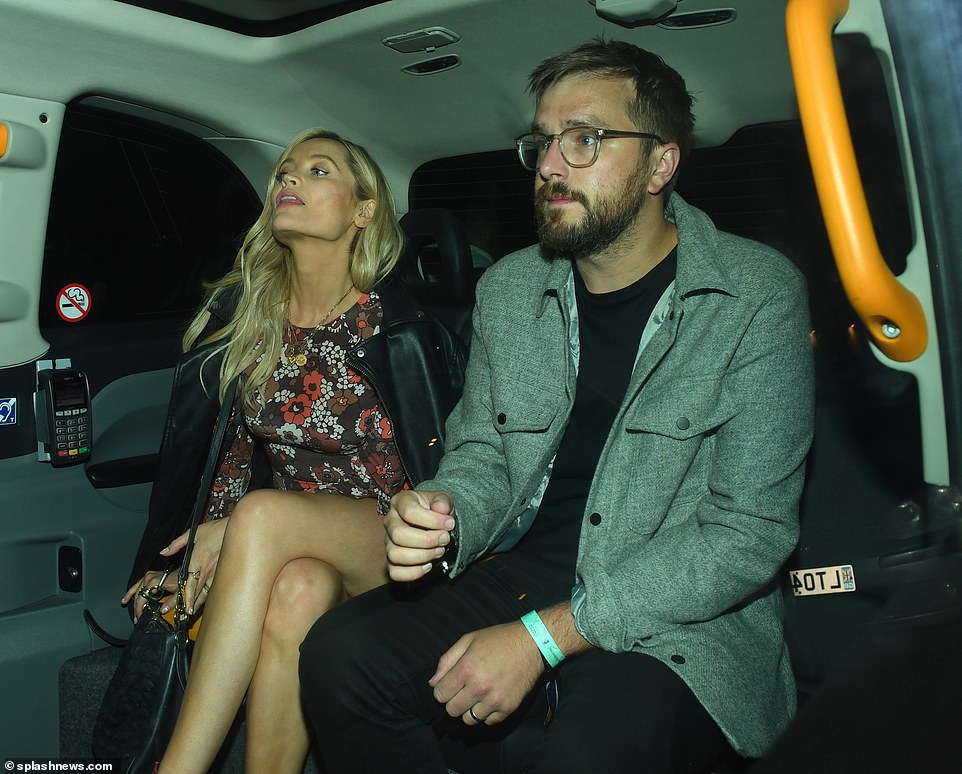 Heading home: Love Island’s Laura Whitmore and her husband Iain Stirling hopped into the back of a taxi too 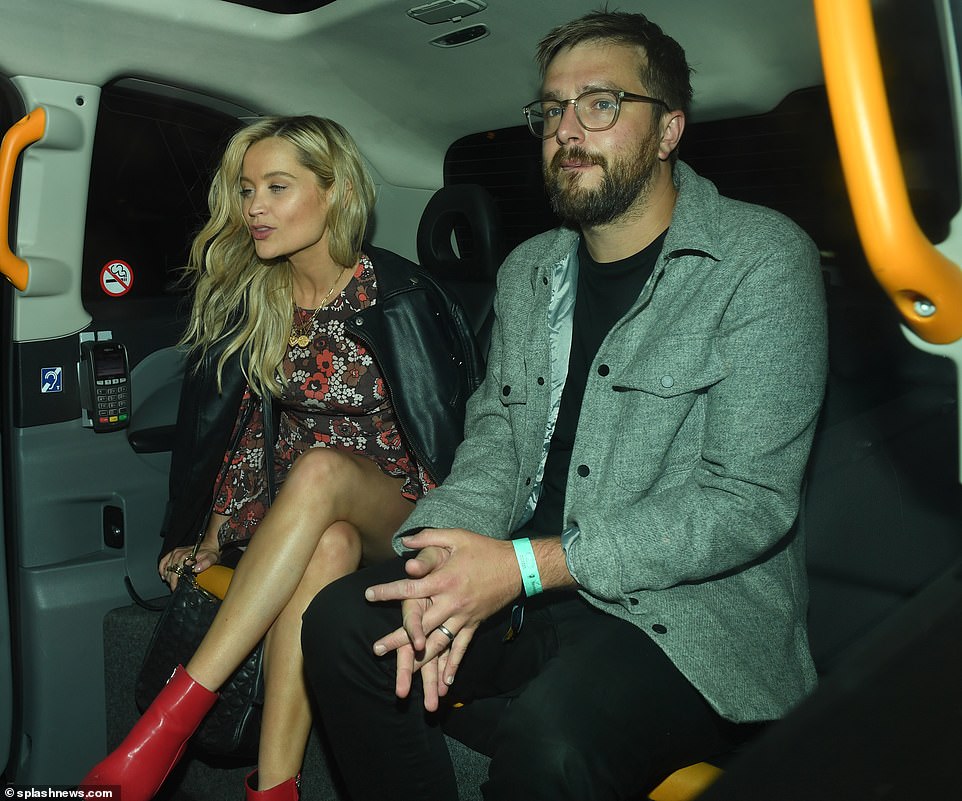 Work it! The Irish model crossed her bronzed legs, having spent some time in Majorca filming the ITV2 show 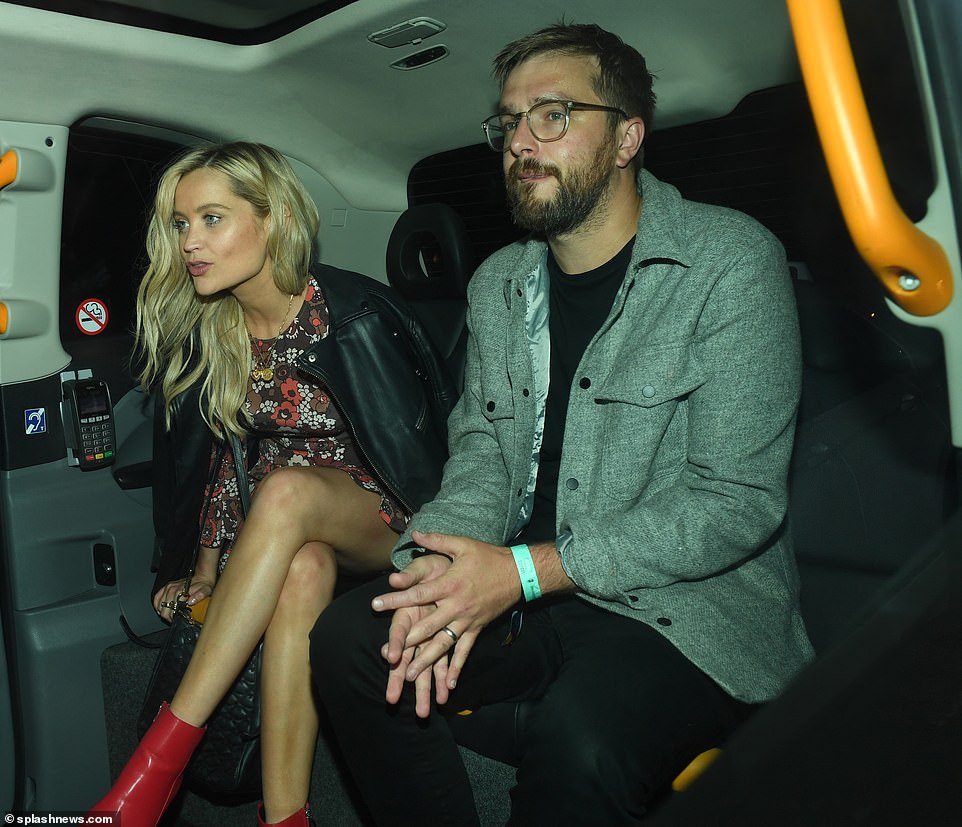 Driving off: The pair looked a little sleepy, with Laura directing the driver to their home address