On Friday, the actress and entrepreneur took to her Instagram page and shared a behind-the-scenes video of her family during a photoshoot where they were hoping to take that perfect family portrait for Christmas 2022. 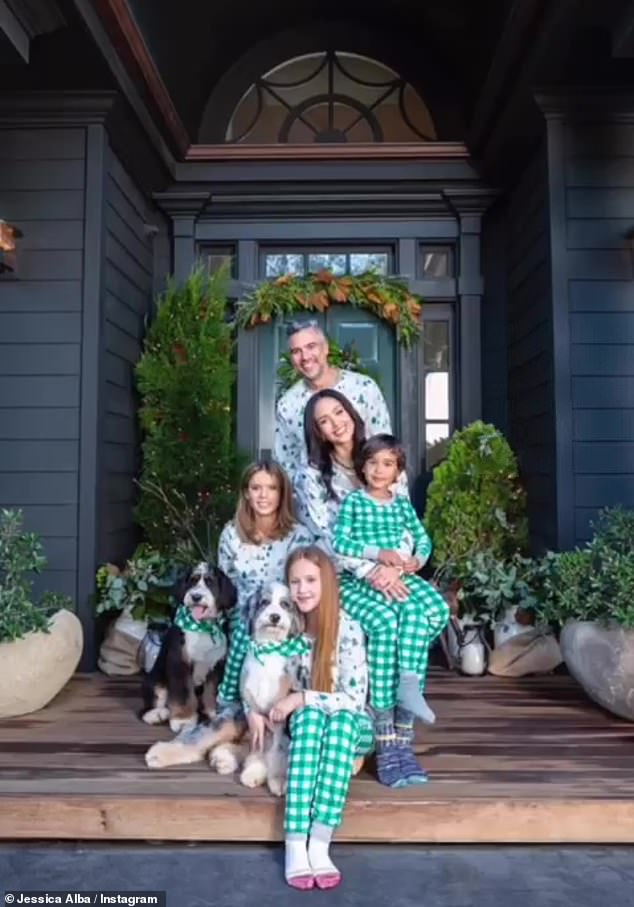 Feeling like Christmas: Jessica Alba, 41, gave a sneak peek at her holiday family portrait with a behind-the-scenes video she shared on her Instagram page on Friday

The family of five, seven when you count pet pooches Lucy and Dolly, all sat down on the front stoop of their home in Los Angeles. But like all families, it took some patience and wrangling to get everyone to sit still for a round or two of photos.

‘Nothing like trying to wrangle 3 kids and 2 dogs for a holiday shoot…  #BTS realness,’ the actress and co-founder of The Honest Co. wrote in the caption, adding, ‘But hey – at least we had the cutest PJs in the game @honest.’

Their dogs ended up taking a prominent role in the photoshoot, as each of were shifted from one spot to the next before Haven and Hayes declared they had the right arrangement. 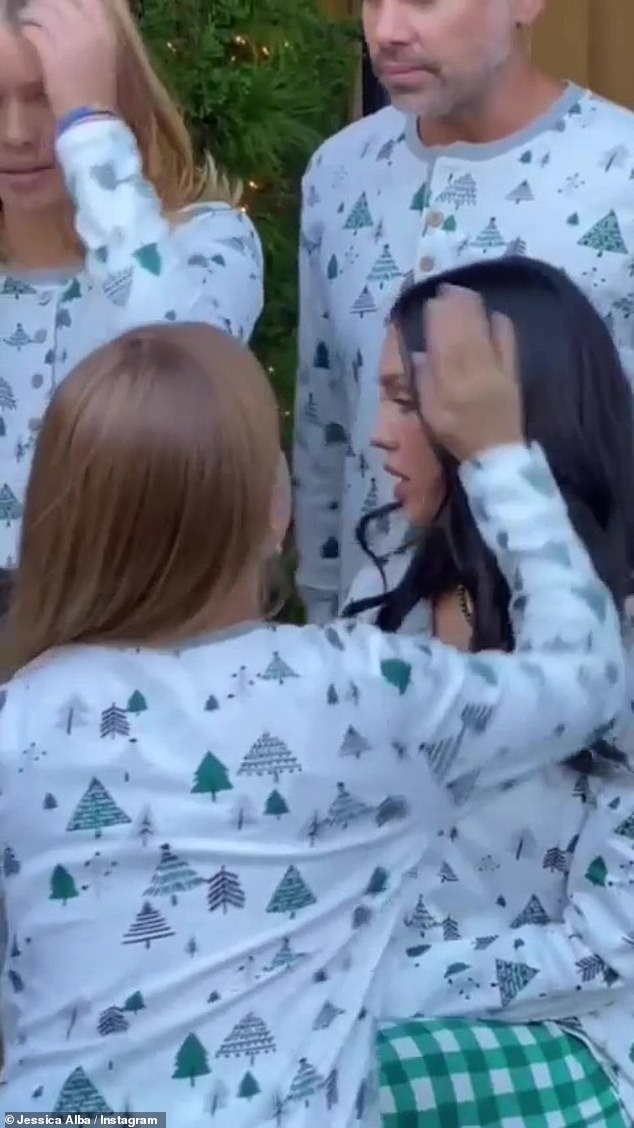 Adorable: Daughter Haven, 11, fixed her mom’s hair off the top of the video 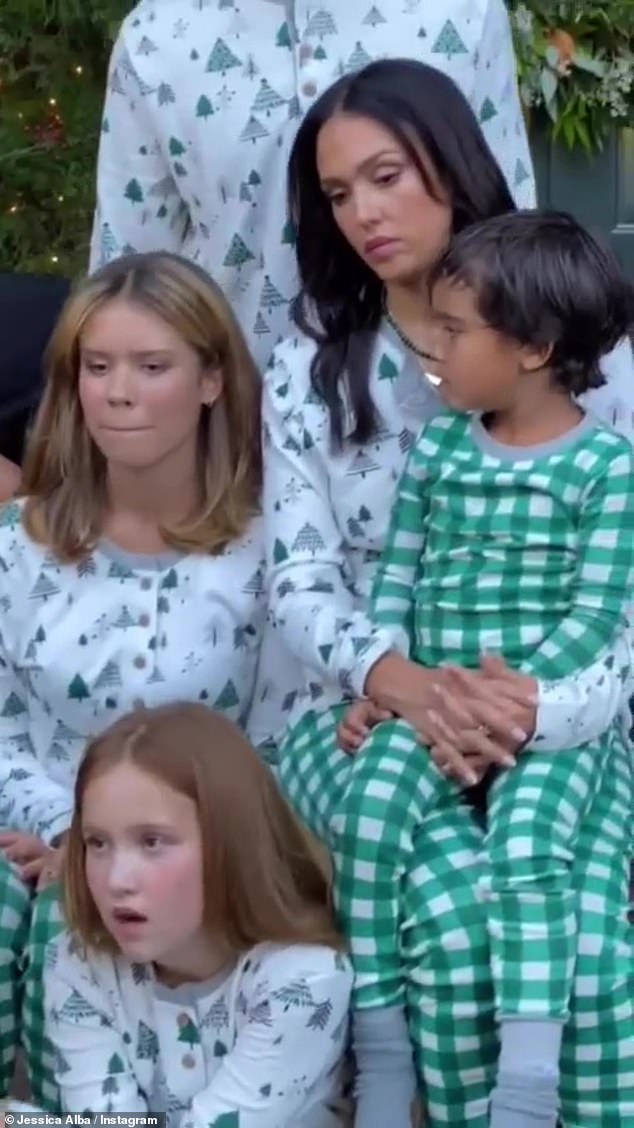 Holiday shoot: Alba had all three of her kids sit around her, which included daughters Haven, 11 Honor, 14, and son Hayes, four, who sat on her lap

Eventually, they decided Warren would stand back and center, just feet from the front door and directly behind his wife.

The producer and co-founder of lifestyle brand Pair of Thieves, 43, opted to wear pjs that were predominantly white with an assortment of green Christmas tree images all over it.

The Fantastic Four actress, 41, wore the exact same pajama top but added green and white-checkered bottoms to her ensemble. which was exactly what daughters Honor, 14 and Haven, 11, decided to wear. 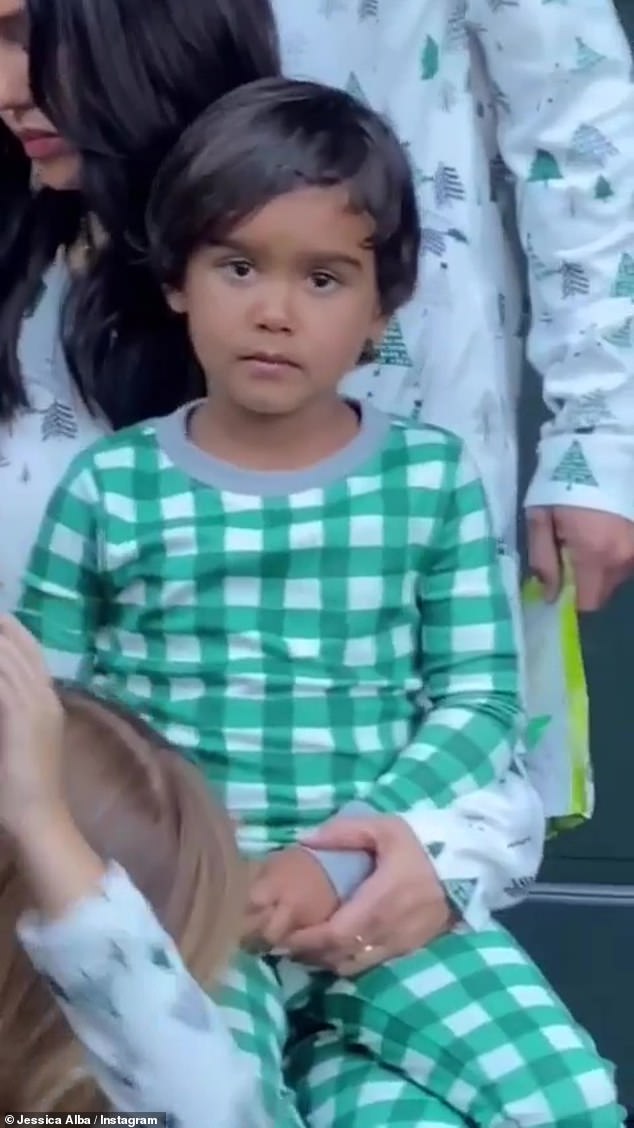 In the spirit: Hayes was dressed in green and white-checkered pajamas for the photoshoot 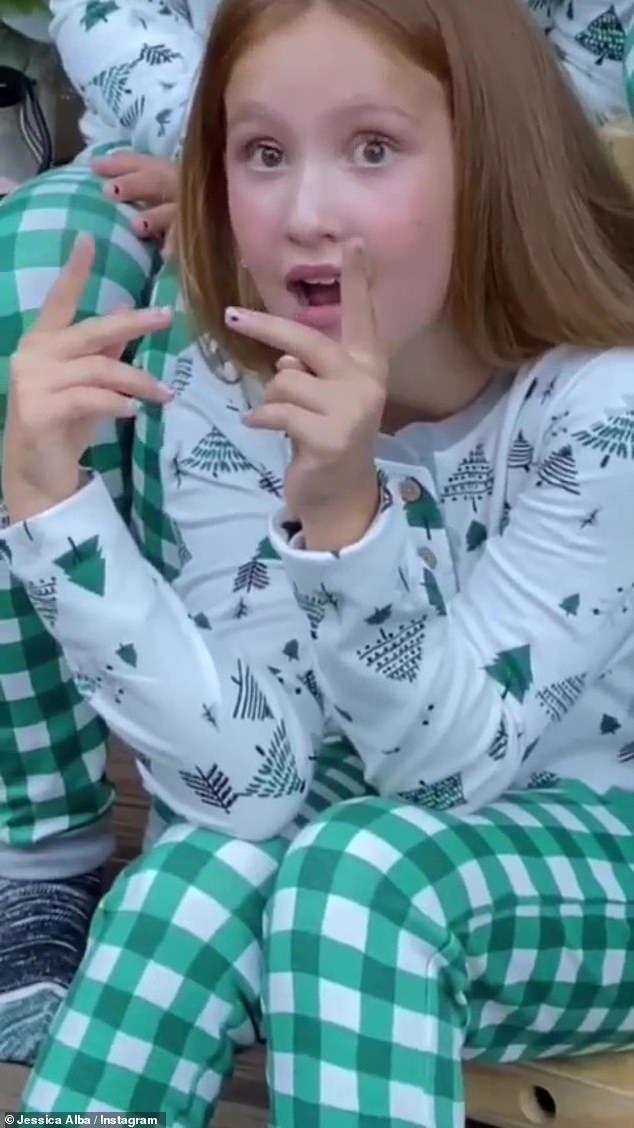 Mix and match: Haven wore one item for each of the two pairs of pajamas 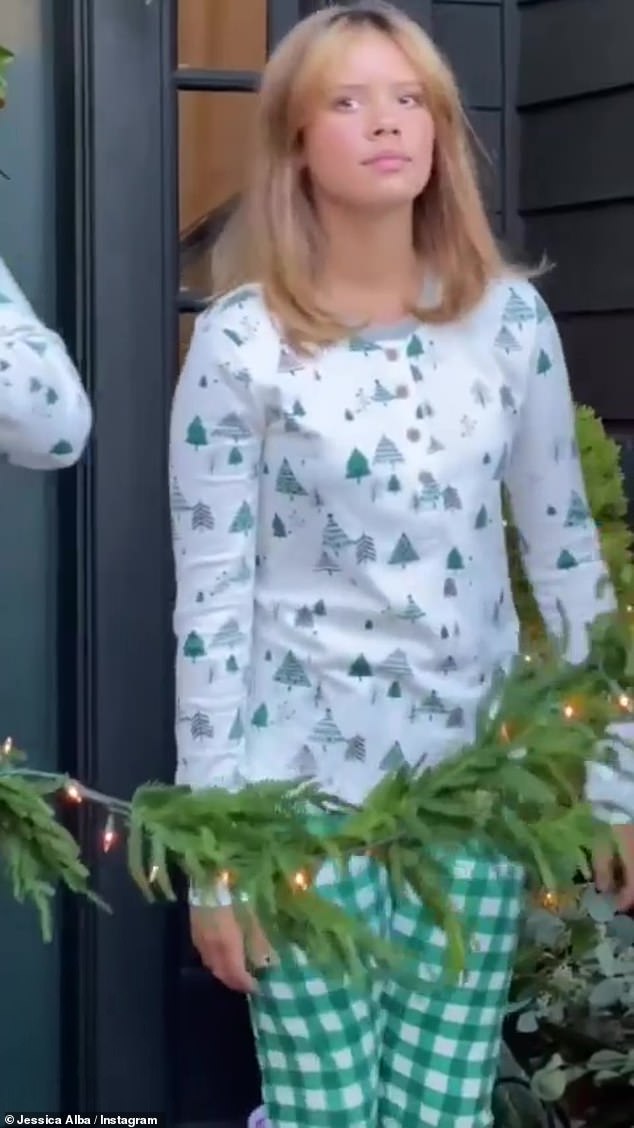 Hayes ended up sitting on his mother’s lap in outfit of that green and white-checkered pjs.

With Haven sitting front and center, the family’s two dogs sat to her right just in front of Honor, who’s a look-a-like for her famous mom.

After a couple rounds of photos, it appears Alba got the perfect family portrait for the holidays 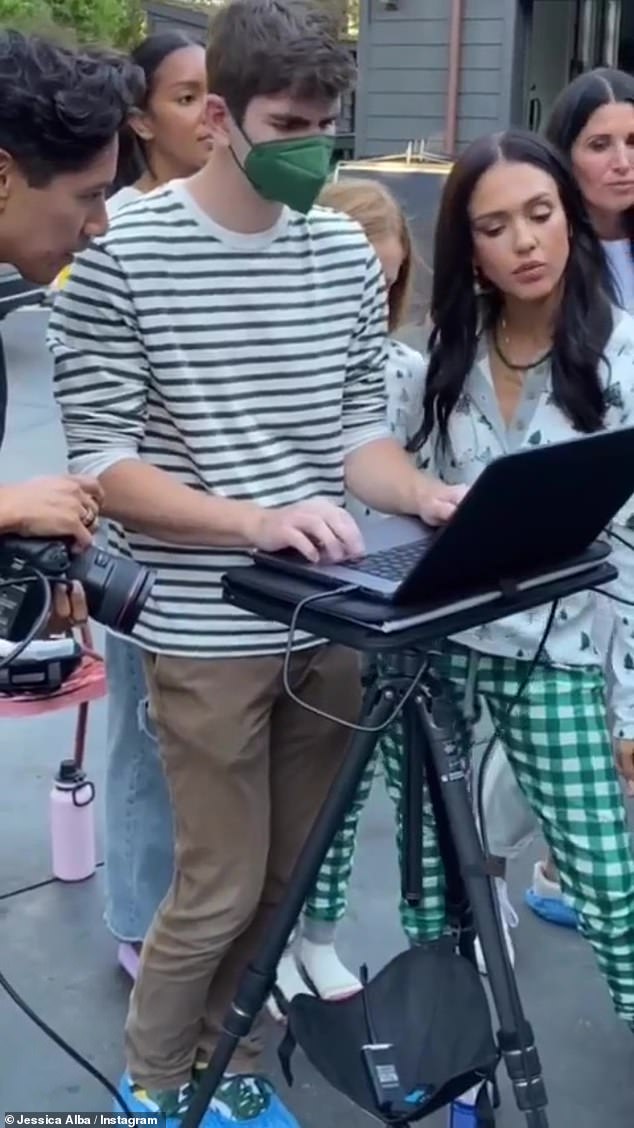 ‘Let’s do it again’: At one point, the family looked over the various images and decided to do another round of photos 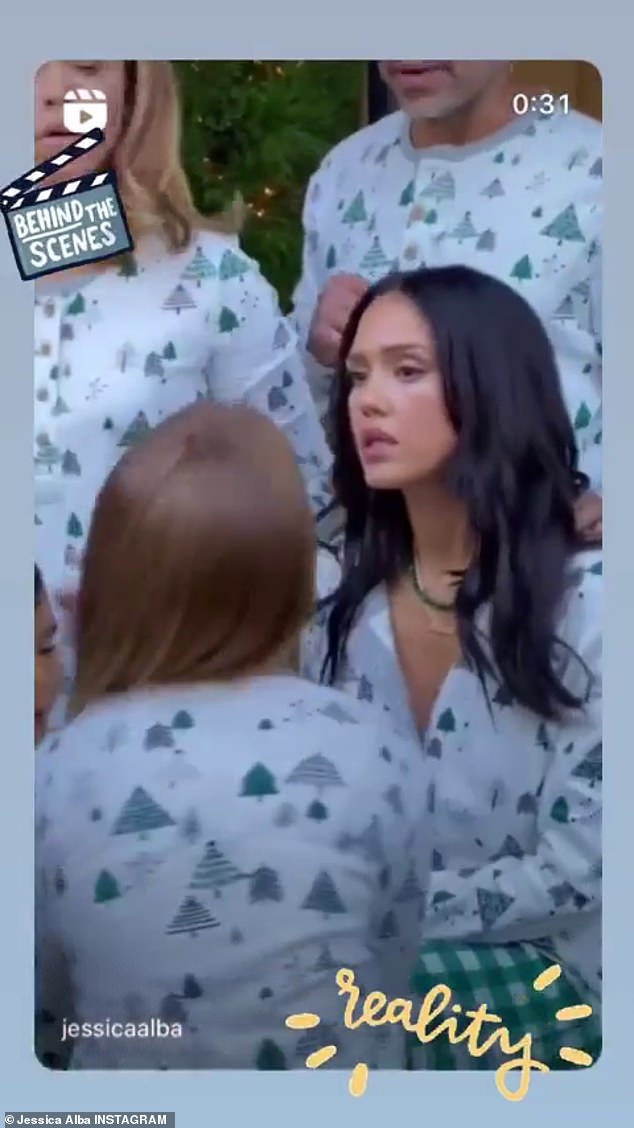 Wrangling time: It took some patience to get everyone to sit still for the photoshoot 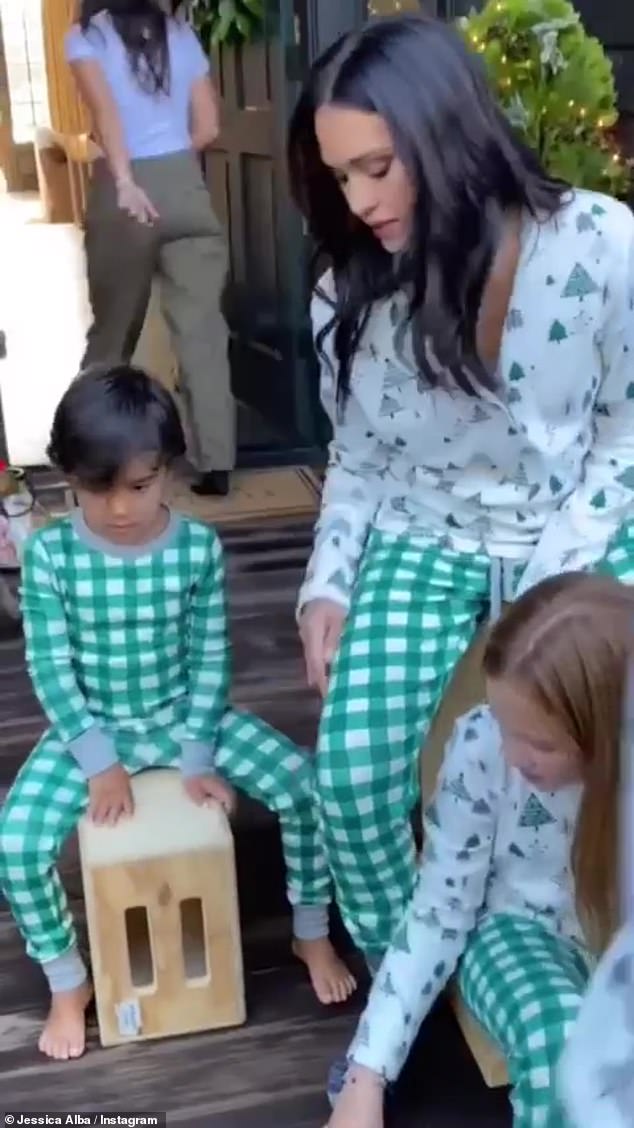 We can work it out: The family took some organizing to get the seating right 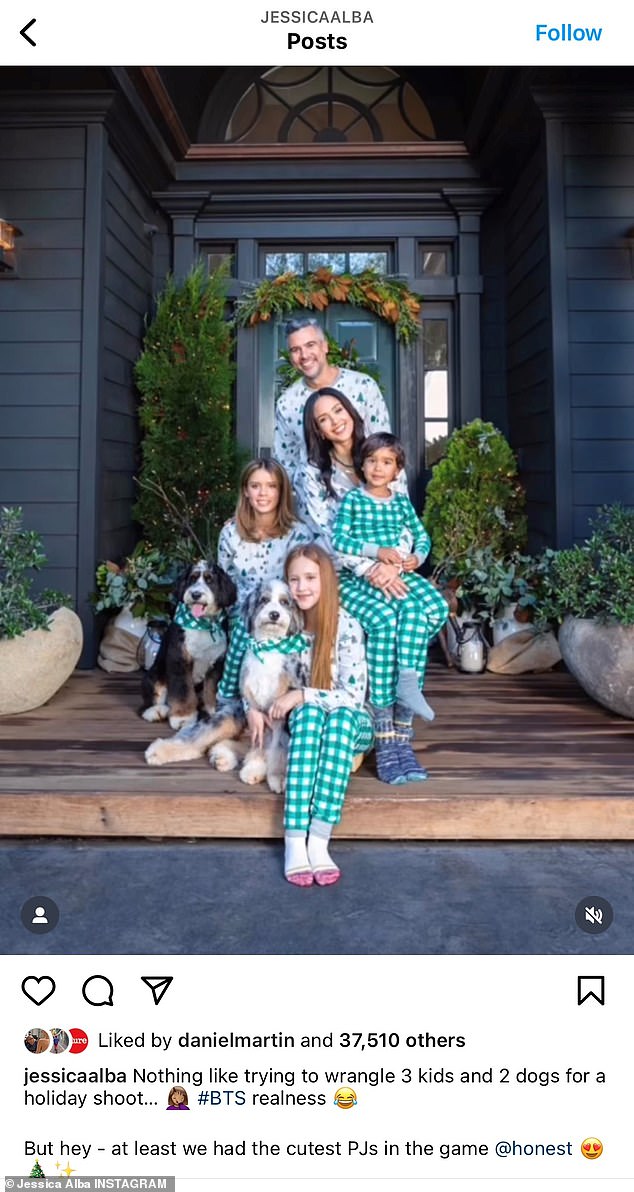 Lovely: In the end, Alba got a lovely family portrait to work with this holiday season