‘Painful to watch’: Jessica Simpson sparks concern from fans as she appears ‘fidgety and nervous’ and ‘slurs her words’ while reading cue cards for sponsored social media ad

Jessica Simpson has sparked concern among fans for appearing ‘fidgety and nervous’ while filming a sponsored post for Flonase nasal spray on Tuesday via her official Instagram account.

The 41-year-old singer can be seen reading from cue cards as she promotes the allergy relief medicine, but followers were quick to flood the comment section with questions about her ‘awkward’ demeanor.

‘Lmao Flonase please hire a professional. That was embarrassing to watch,’ one of her 5.5.million followers wrote underneath the accompanying post, triggering a barrage of similar reactions. 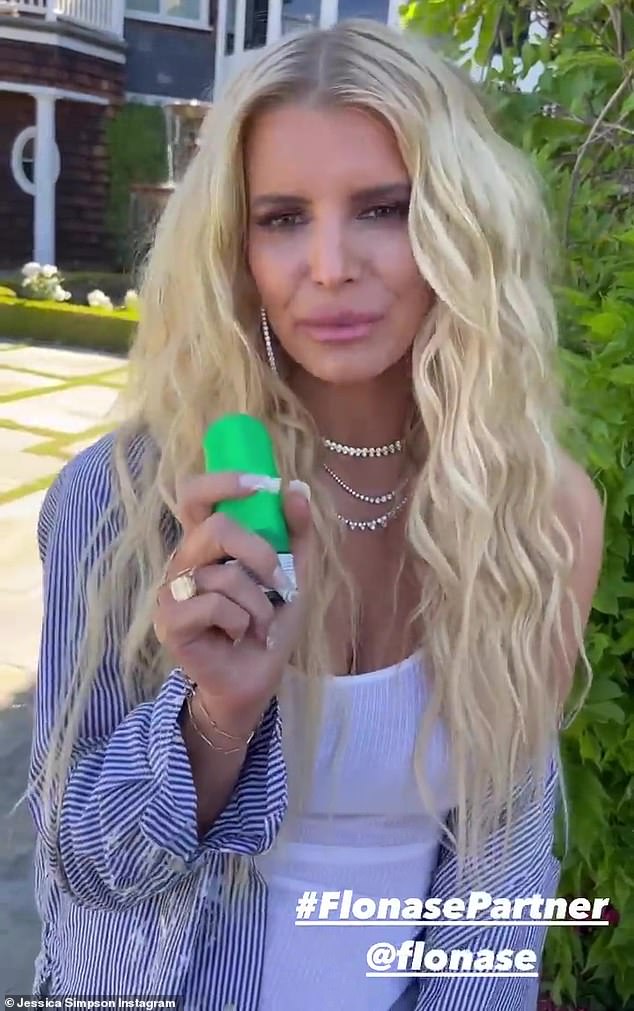 ‘Omg I thought the same thing. It was brutal to watch. I miss the old Jessica,’ another fan chimed in, with another saying: ‘She slurs her words… something is up with her.’

‘Well yeah she was reading off of a card. Hard to believe that it couldn’t be memorized! I mean it’s an ad, how do you not memorize 20 seconds of talking about Flonase.’ 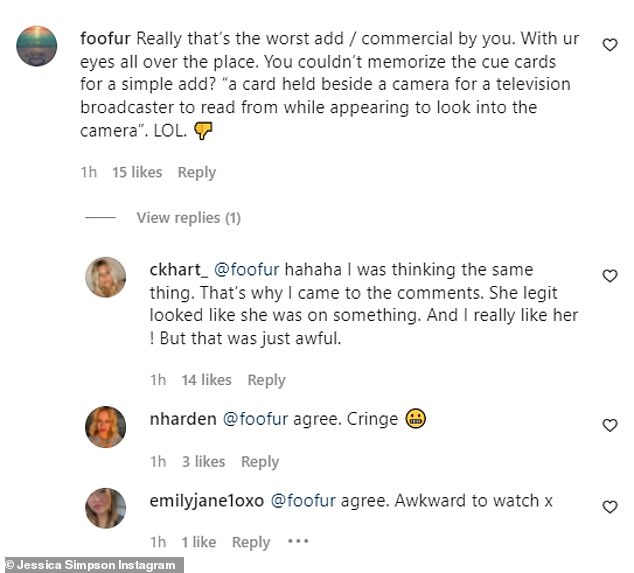 ‘Cringe’: Jessica’s post fell flat with her followers who seemed more concerned about her demeanor in the video 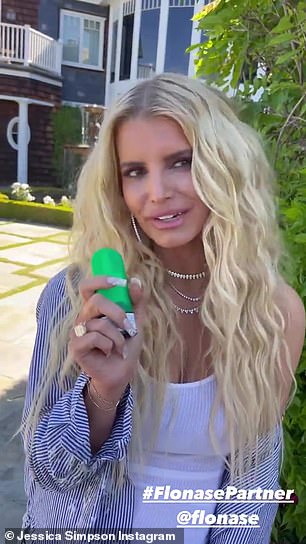 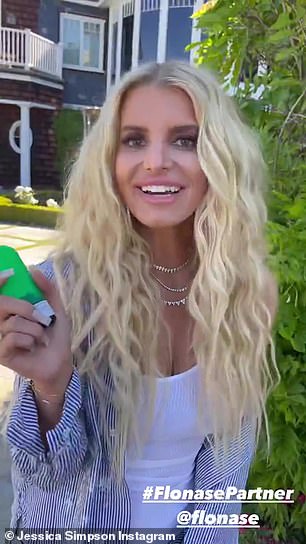 Sponsored post: The 41-year-old singer can be seen reading from cue cards as she promotes the allergy relief medicine 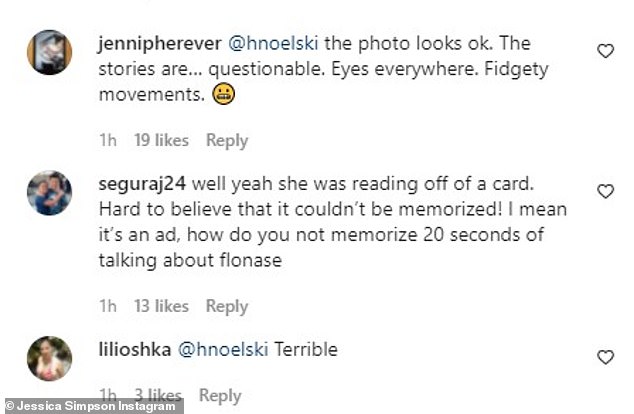 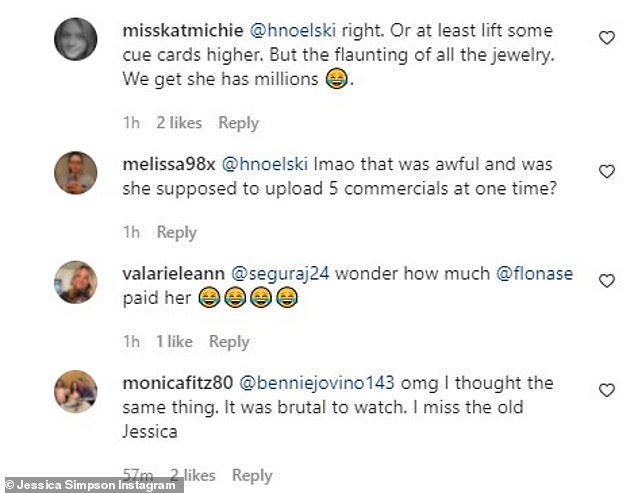 ‘Brutal to watch’: Some fans found the video to be uncomfortable viewing

Simpson, who has been sober for four years, once admitted to being ‘drunk’ on The Ellen DeGeneres Show back in 2017, revealing last year that she still can’t bring herself to watch the interview.

Some fans defended the star in the comments, writing: ‘I see countless comments from angry and abusive people giving her s*** for no reason.’

Last week, Simpson opened up about losing 100lbs in weight for a third time, after shocking fans with bikini pictures on her Instagram. 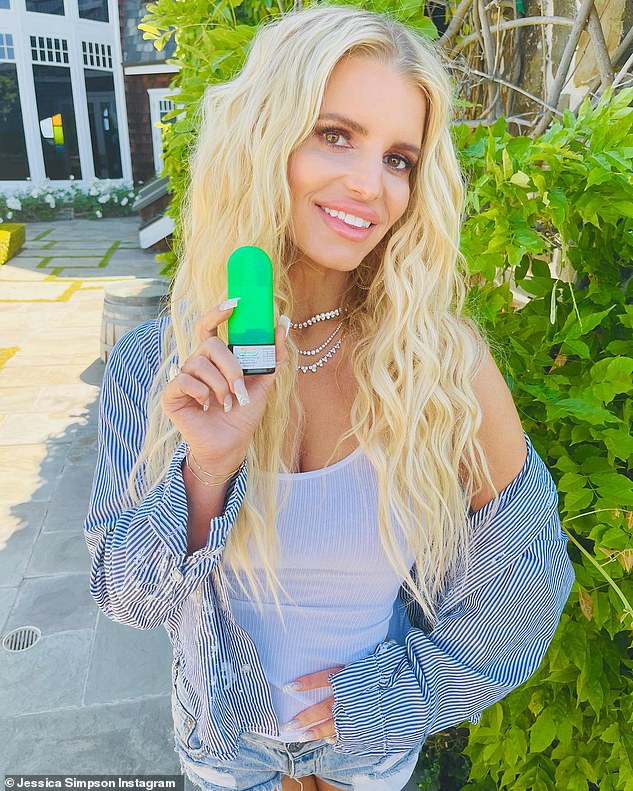 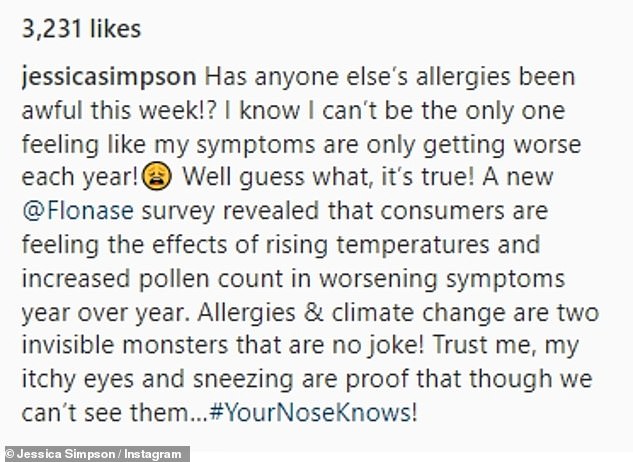 Promotion: Jessica posted this Instagram snap and caption to her fans on Tuesday

‘Well, it took three years,’ she said during an appearance on The Real.

‘I believe in setting small goals for yourself because in my life and how I’ve done it, there’s easy ways to throw in the towel and just feel like it’s impossible. So, the small goals for me are what helped me achieve the main goal.’

Simpson and her husband Eric Johnson — whom she married in 2014 — share three children together: daughters Maxwell, nine, and Birdie, three, and son Ace, eight.

Speaking of her pregnancy weight gain, she said: ‘I definitely gain weight, a lot of weight, in my pregnancies. I celebrate pregnancy, but this last pregnancy was really hard for me,’ she added in reference to her youngest daughter Birdie.

‘I don’t know if it was because I was older, hormones and all kinds of stuff, but whoa, Birdie gave me a brutal stretch.’

What a difference! Jessica revealed earlier this month that she gained and lost 100lbs three times following each of her pregnancies; seen in 2019 with husband Eric Johnson

Although Jessica was happy to be back to a slimmer size, last week she said that all body sizes should be celebrated.

‘It’s hard to not see your flaws first, [but] I think that, as a society, things are changing. And that’s great because every body’s being celebrated,’ she told People.

She spoke about her own Jessica Simpson collection and making sure it featured a wide variety of sizes, ‘because I’ve been every size.’

Back in April 2021, Jessica shared in a Today interview that she previously had to get rid of her scale after the constant need to check her weight progress gave her body images issues. 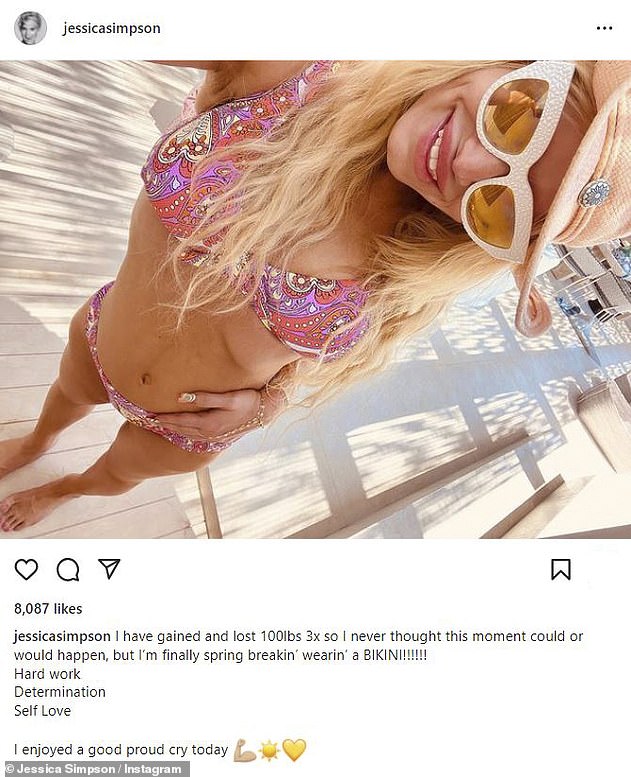 Impressive: Jessica previously shared that she lost 100lbs after each of her three pregnancies while showing off her astounding bikini body