Well, this is going to disappoint a great many fans if it’s true…

You may have noticed over the past day or so the name “Jimmy Pesto” has been trending on Twitter. No, he’s not some obscure Marvel character people think is going to appear on WandaVision; he’s the irascible restaurant rival of Bob Belcher on the hit cartoon Bob’s Burgers. Oh, and he might be a domestic terrorist…

On Thursday afternoon the FBI released yet another photo of a participant in the January 6 attack on the Capitol Building. Fans couldn’t help but notice the striking resemblance to this unidentified man and actor Jay Johnston.

The voice actor has also been doing live action work for decades on classic comedy shows like Mr. Show and The Sarah Silverman Program — where he played Officer Jay. 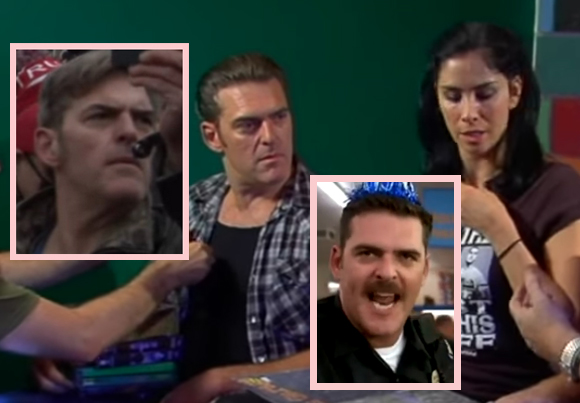 At first people were joking about how much the photo looks like the actor — we mean, this couldn’t possibly be the world we live in, right?

Just the resemblance obviously wouldn’t be nearly enough evidence — lots of folks look somewhat alike. However, sadly, there are some real receipts…

People who personally know Johnston have confirmed he is a Donald Trump supporter and attended the event. Comedian Tim Heidecker, who worked with Johnston on the Netflix sketch show With Bob And David, wrote and then deleted that he had “confirmed through reliable sources” that it was him. Spencer Crittenden, who works on the show Harmontown and Rick And Morty, where Johnston was a guest star, tweeted:

“I mean I think that’s him in the pic but even if it wasn’t he was definitely at the protest.”

Harmontown still photographer Cassandra Church was even more sure. She wrote:

“I’m no detective, but I do know Jay. He said he was there. And that’s him in the picture. So…”

When someone asked how she knew he was there, she revealed:

“Because he told people he was”

And it turns out this isn’t even out of the blue for Johnston. Back in December 2015, the actor was a guest on the podcast of Gavin McInnes, founder of the Proud Boys — an alt-right group that was a major presence at the rally-turned-insurrection attempt. You may remember they were the ones Trump told to “stand back and stand by” during one of the debates. Several of the nearly 300 arrests so far have had ties to the organization, which has officially been designated a hate group by the Southern Poverty Law Center.

This almost certainly means the end of Jimmy Pesto — or a subtle recasting. Remember, Disney owns Fox now. And while the firing of Gina Carano from The Mandalorian for bad social media posts may be controversial, when someone actually takes part in an activity the FBI have confirmed qualifies as domestic terrorism? Pretty much a sure thing.