John Legend gives Chrissy Teigen a playful squeeze on her behind

EXCLUSIVE: John Legend gives Chrissy Teigen a playful squeeze on her behind as the couple enjoy a much needed holiday in Italy after a tough year amid cyber bullying scandal

She recently came under fire after bullying tweets from her past resurfaced.

But Chrissy Teigen’s husband John Legend helped her take her mind off of things as the duo continued their magical getaway to Italy with their two children.

The PDA (We Just Don’t Care) crooner, 42, gave his love a playful squeeze on her behind as they explored beautiful Liguria, Italy. 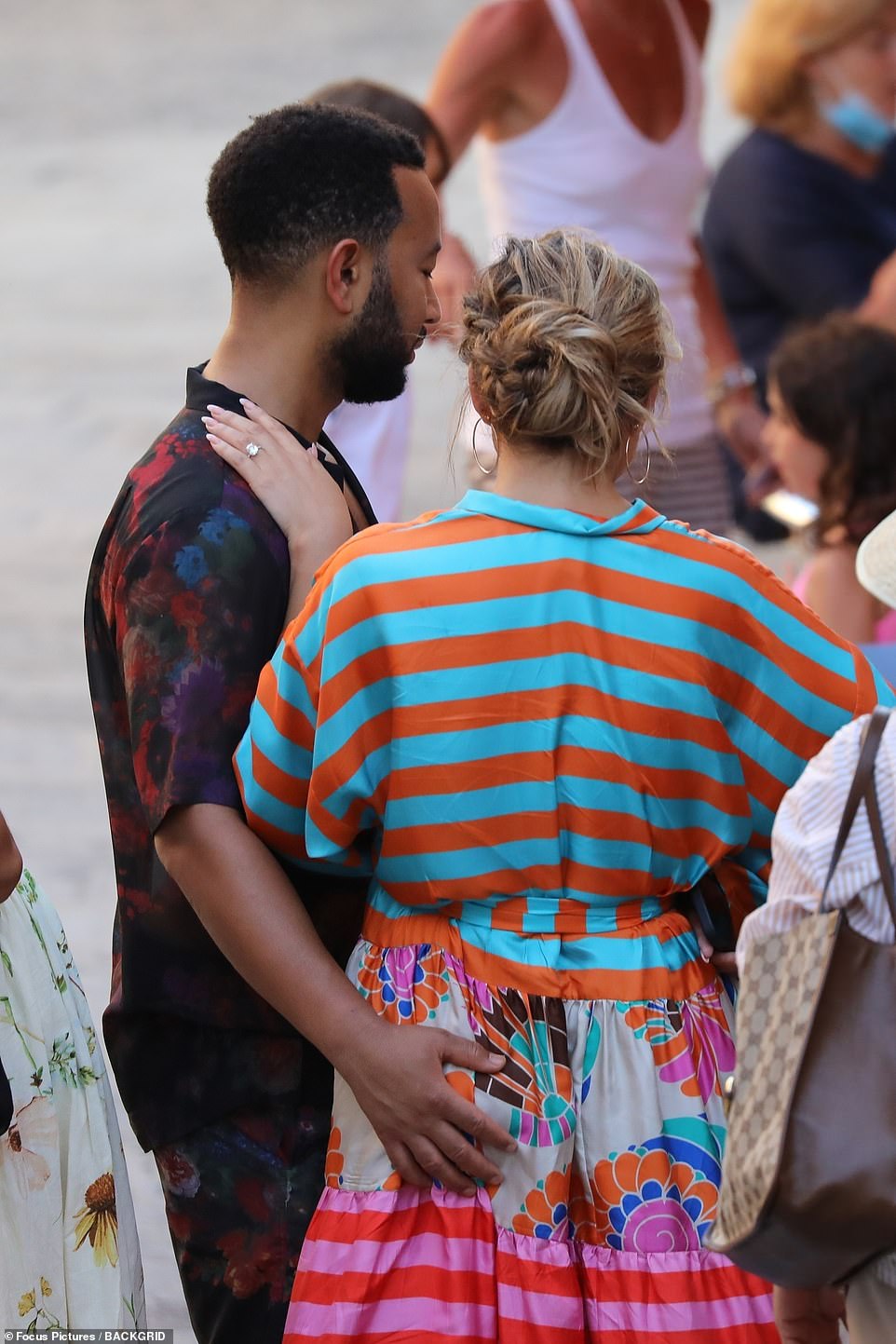 That’s amore! Chrissy Teigen’s husband John Legend helped her take her mind off of things as the duo continued their magical getaway to Italy with their two children

The couple didn’t let the nearby crowd stop them from putting on a touchy-feely display during their day of exploration.

In return, Chrissy tenderly placed her hand on his shoulder with her stunning diamond ring on full display.

The PDA continued throughout the day as the duo linked hands while strolling upon a dock together.

Chrissy looked splendid in a colorful satin robe dress that cinched into her waist whereas her husband wore an artistic button down and matching shorts. 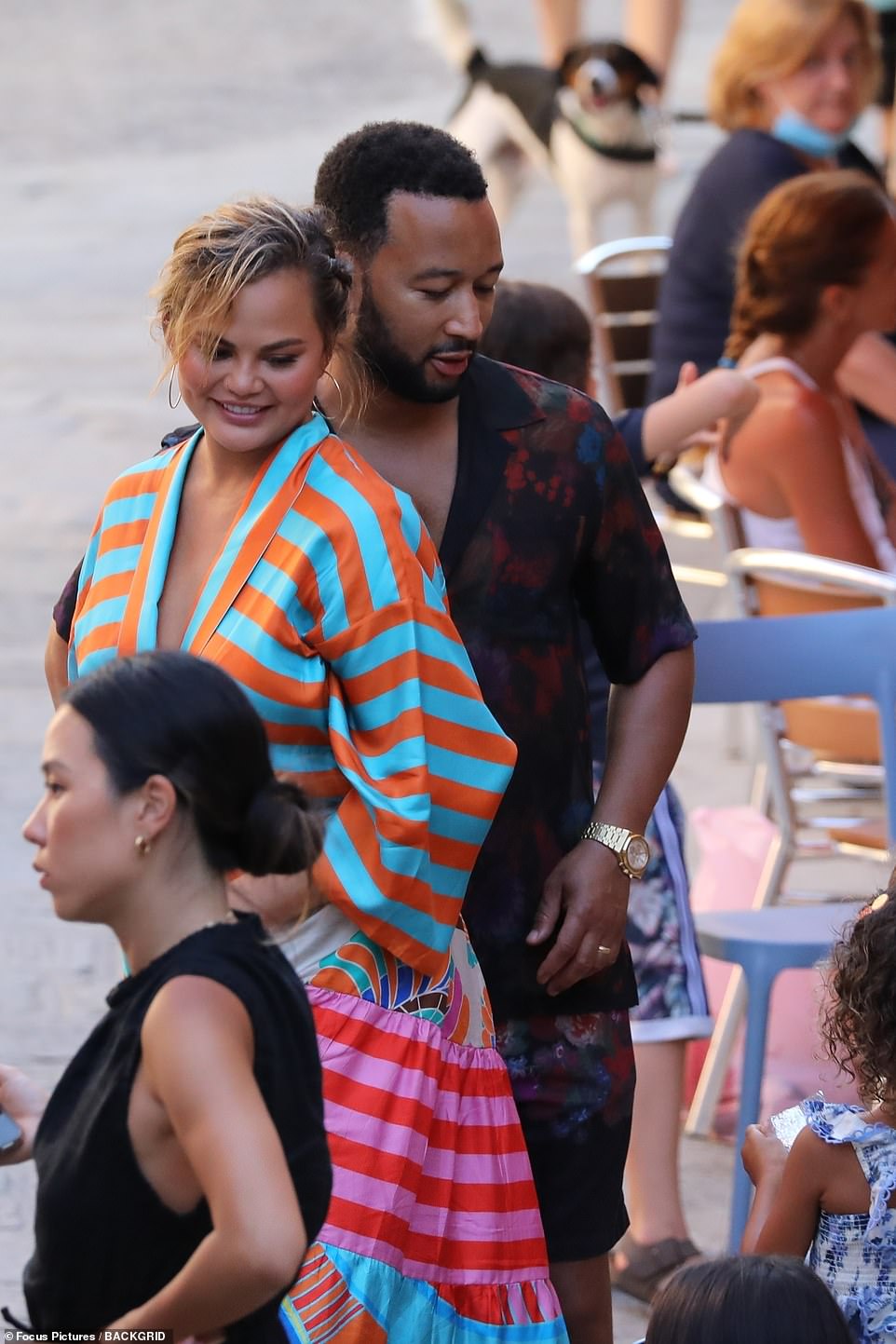 So in love! The singing sensation held his wife close during their day in Italy 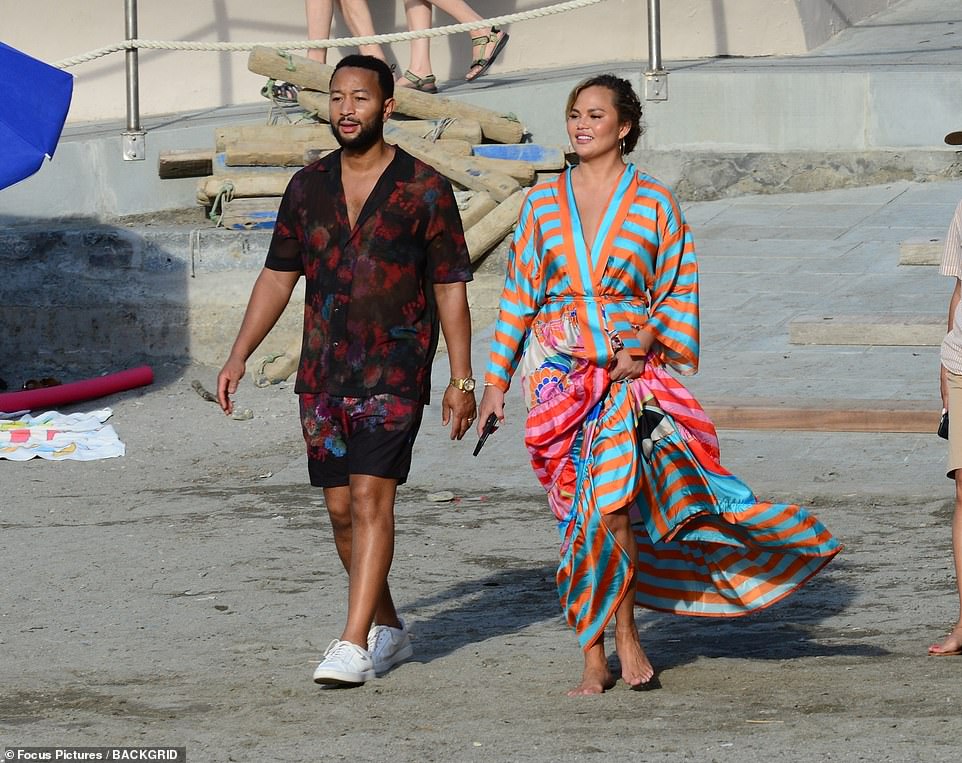 Stars in stripes! Teigen turned heads in a colorful satin robe dress that cinched into her waist 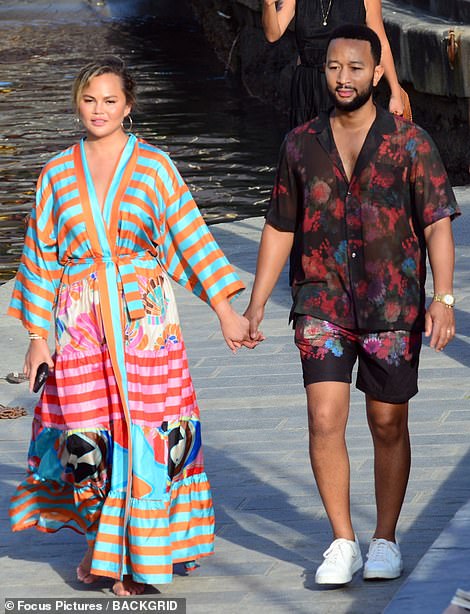 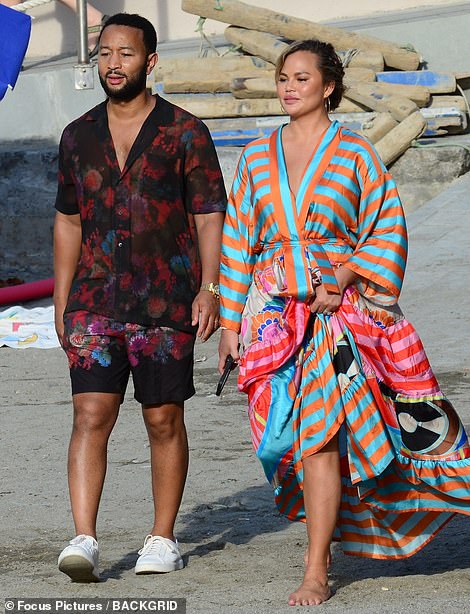 PDA! The couple linked hands whilst strolling down a dock 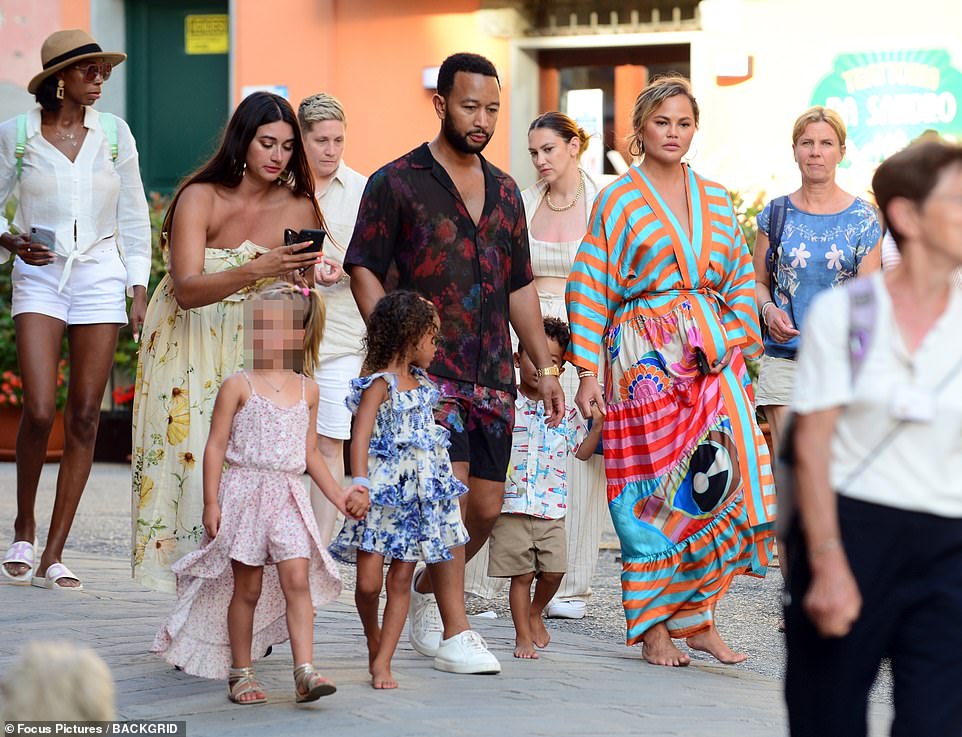 Tourists! The family enjoyed some quality time together checking out the sights

The model slicked her honey locks away from her complexion while jazzing up the look with her large, gold hoop earrings.

All throughout, the couple kept a close eye on their children.

The family of four walked in sync with one another as they took in the stunning city sights.

Chrissy shared a cuddle with her son Miles, three, who also enjoyed a ride on his father’s shoulders.

Mommy and me! The model cuddled her son Miles as they explored the sights 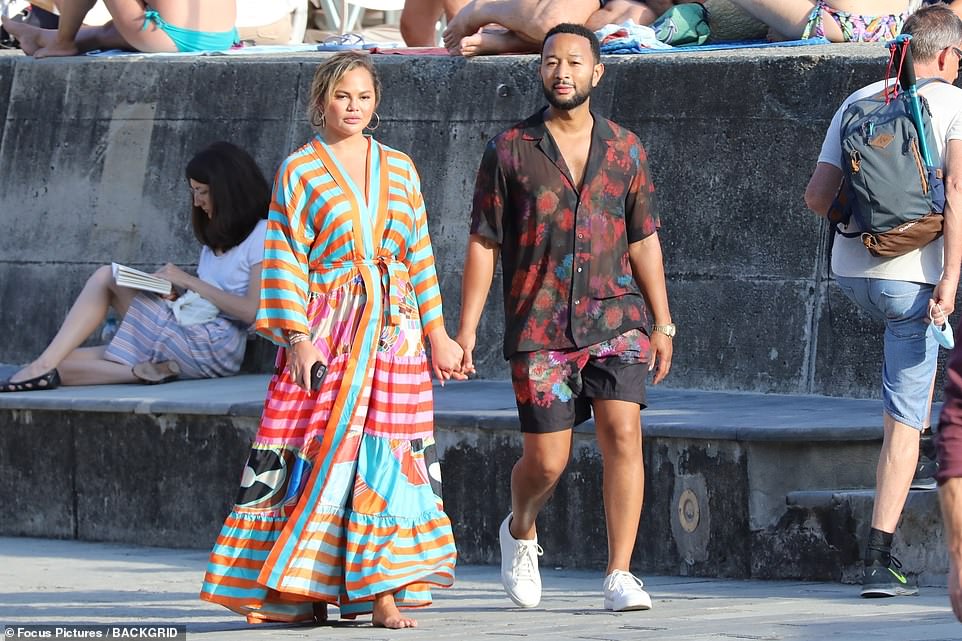 Love is in the air! The couple never strayed far from one another throughout their travels 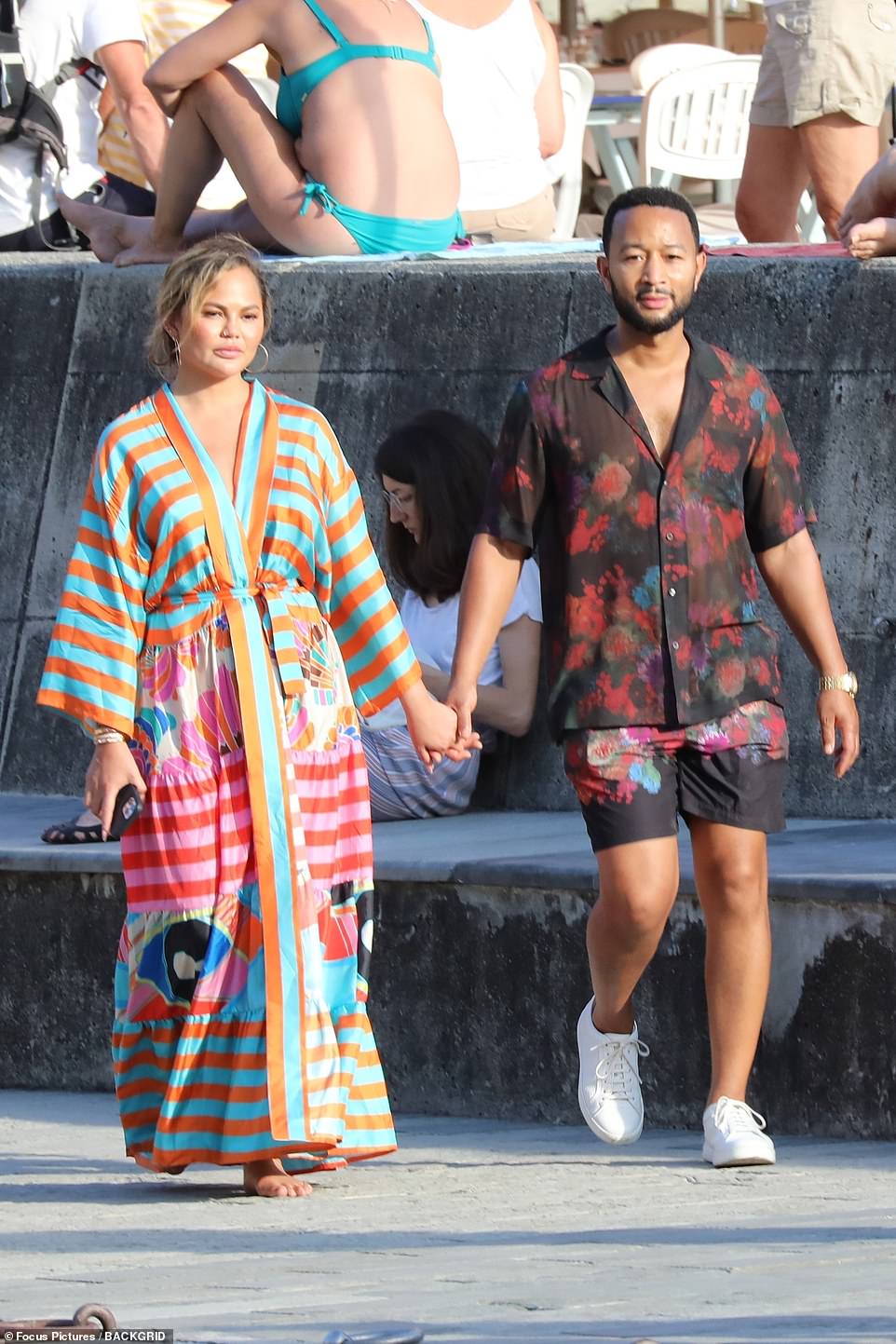 Taking it a step at a time: The model bravely explored the sights barefoot 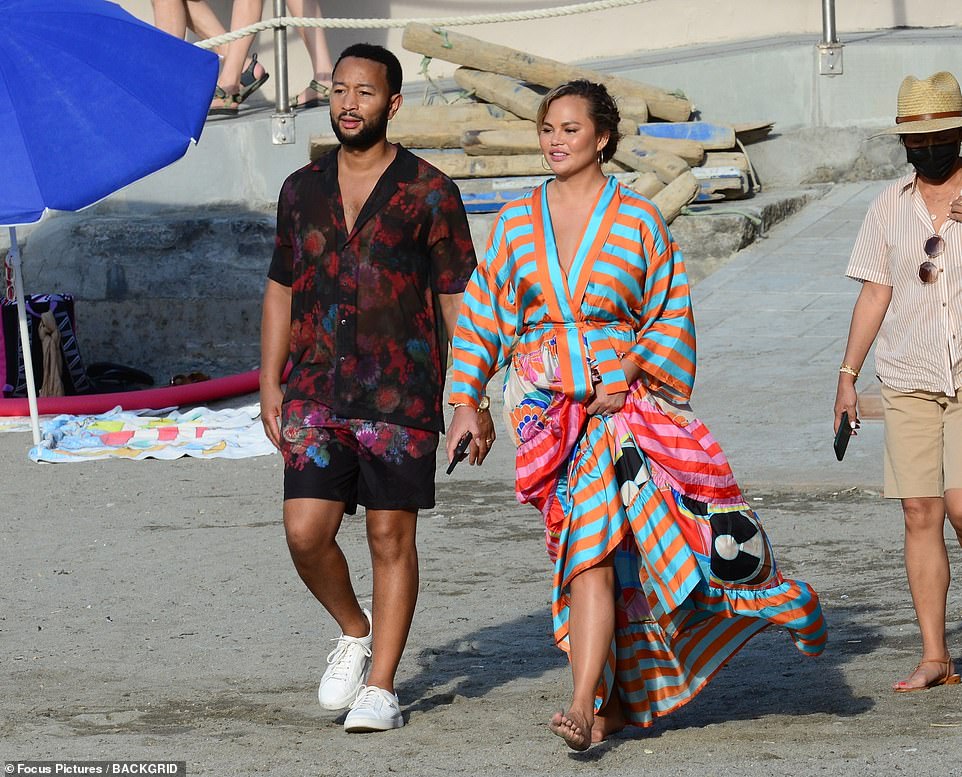 Making a splash! The duo ventured out onto the beach 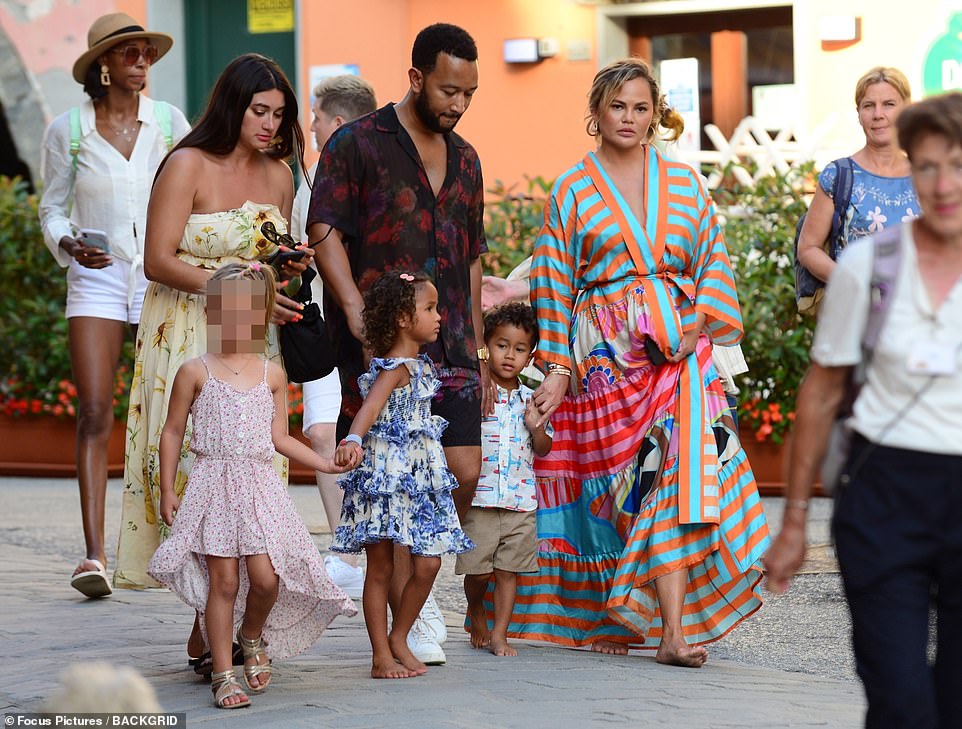 Here they come! The couple kept an eye on their children while walking through the city

The fun continued at the beach, where Miles ventured ankle-deep into the water as his parents watched over him.

And the famous family even enjoyed a boat ride together, where Chrissy looked peaceful sailing away with her children by her side.

The trip wasn’t complete without a little souvenir shopping. 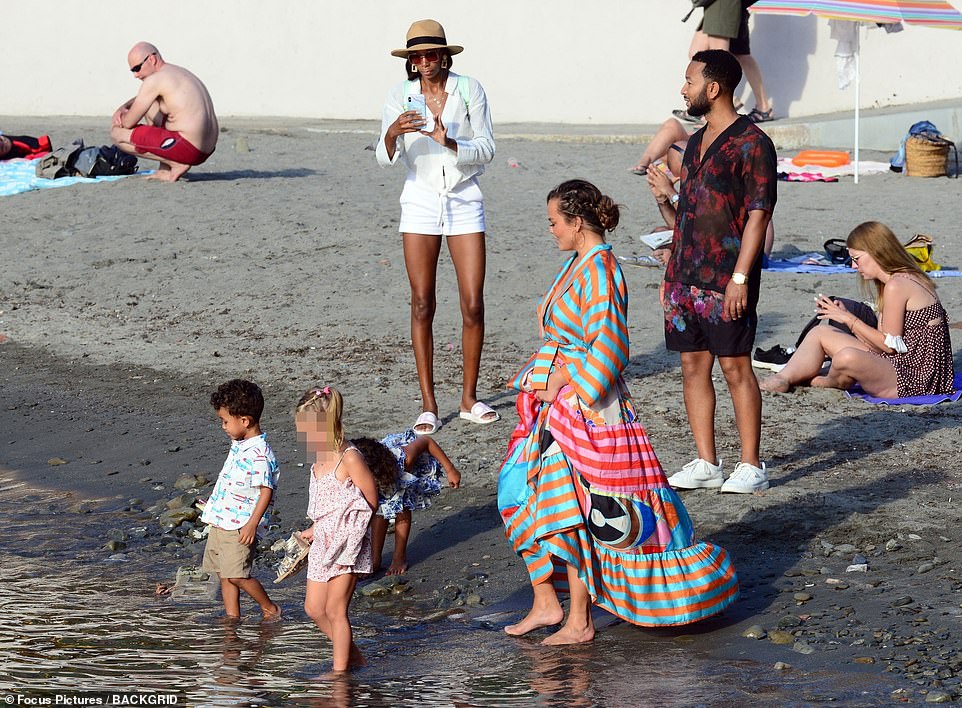 Beach fun! The family fun continued at the beach, where Miles ventured ankle-deep into the water as his parents watched over him 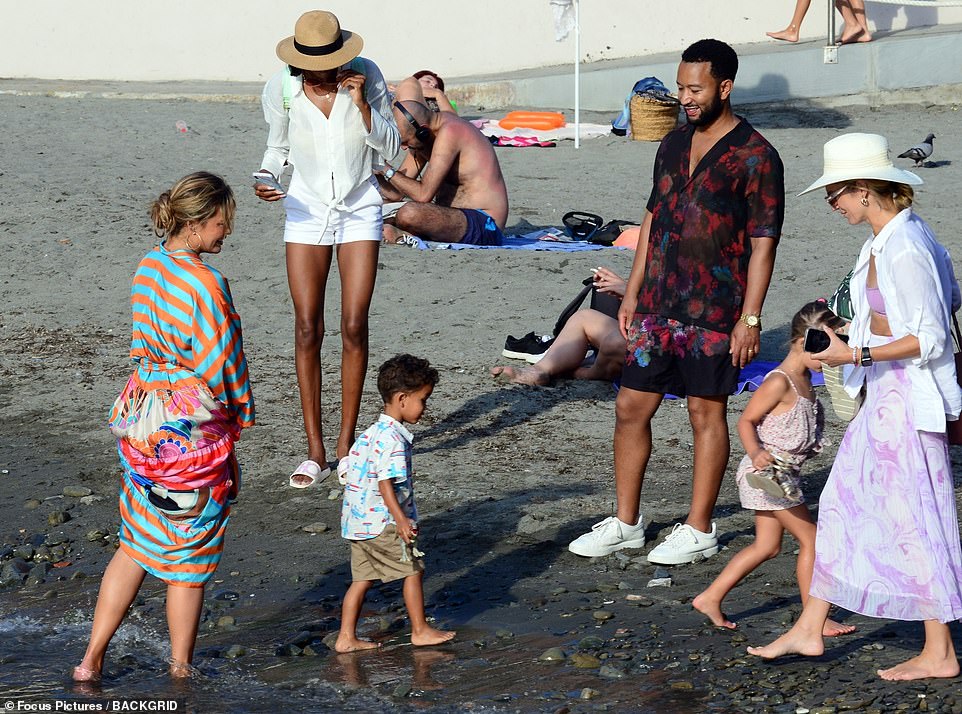 Oh boy! The youngster cooled down as he walked barefoot through the water 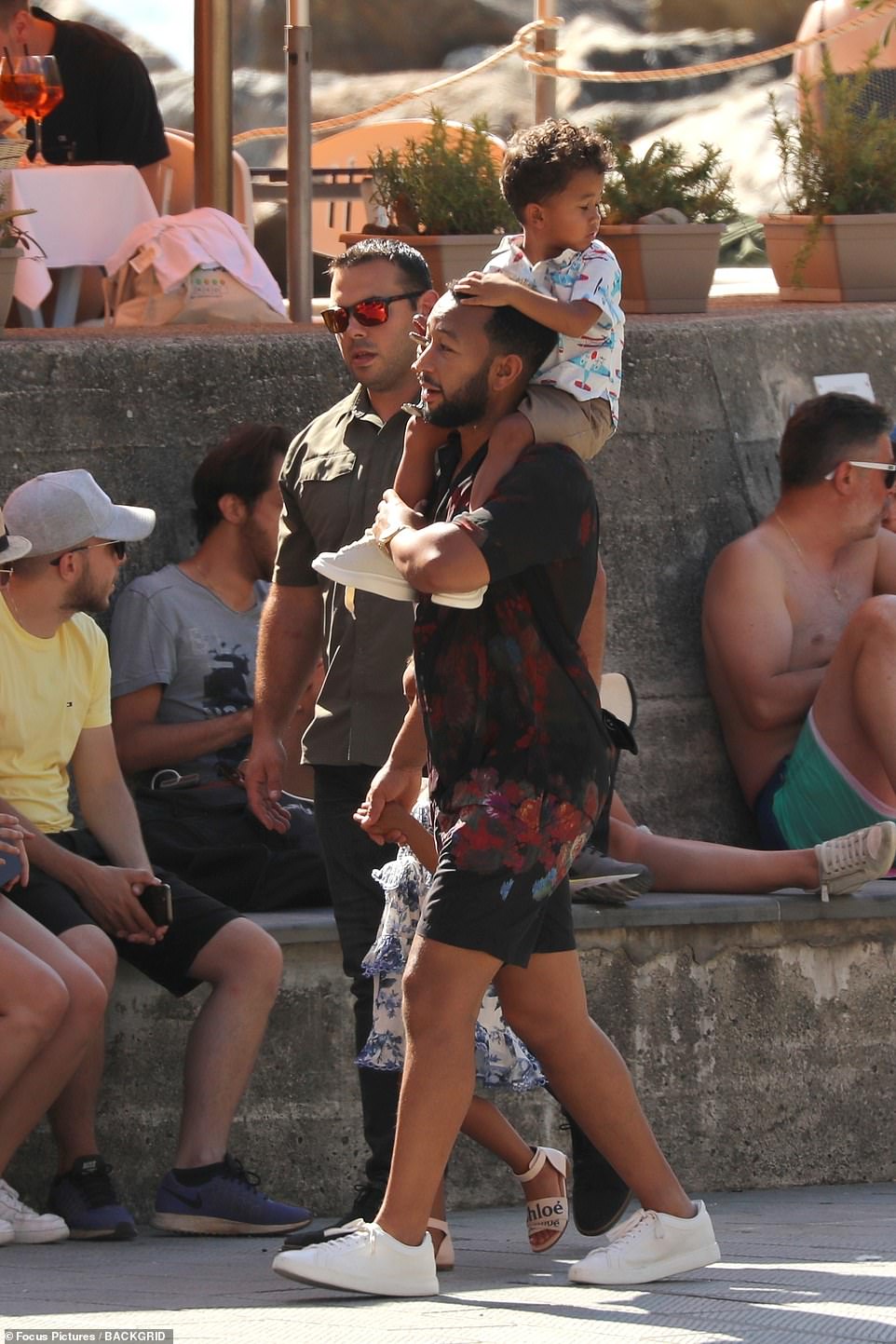 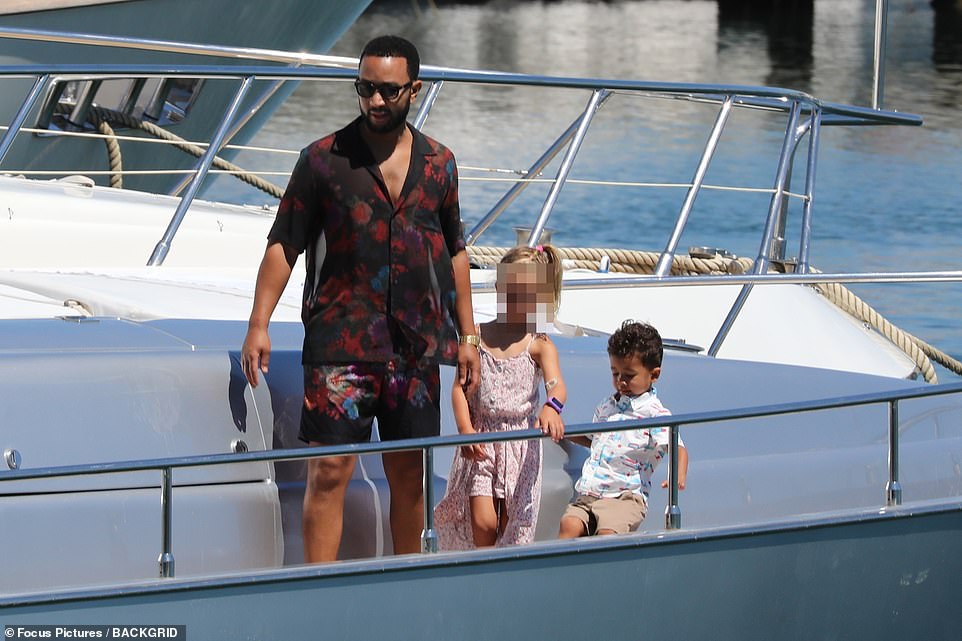 Boat loads of fun! The singer was spotted on board a boat with his son 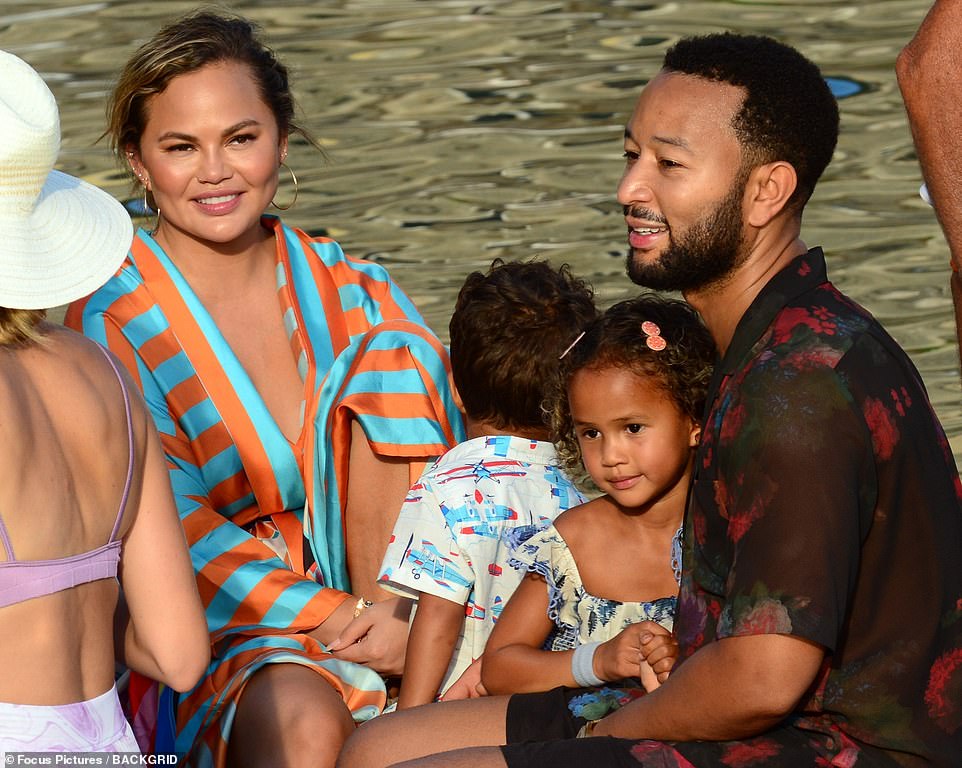 Taking it easy: Teigen beamed with joy while cruising through the water

The cookbook queen stopped by a kitchenware shop, where she and her husband browsed through an assortment of tools.

Chrissy even had her eye on a cutting board, which she showed off to her doting husband.

Whether she was sailing the seas on a boat or exploring the city, the drama thousands of miles away seemed like a distant memory for Chrissy. 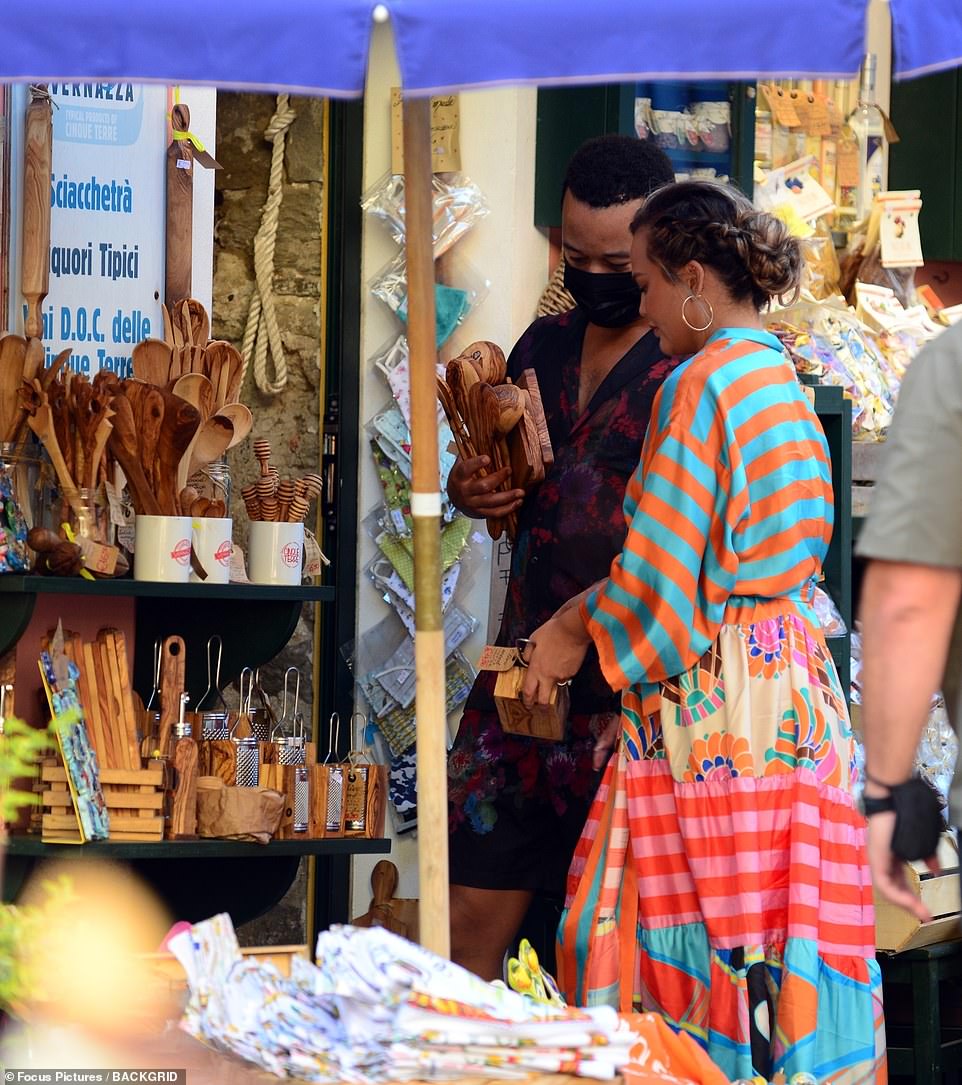 Shop til you drop! The cookbook queen stopped by a kitchenware shop, where she and her husband browsed through an assortment of tools 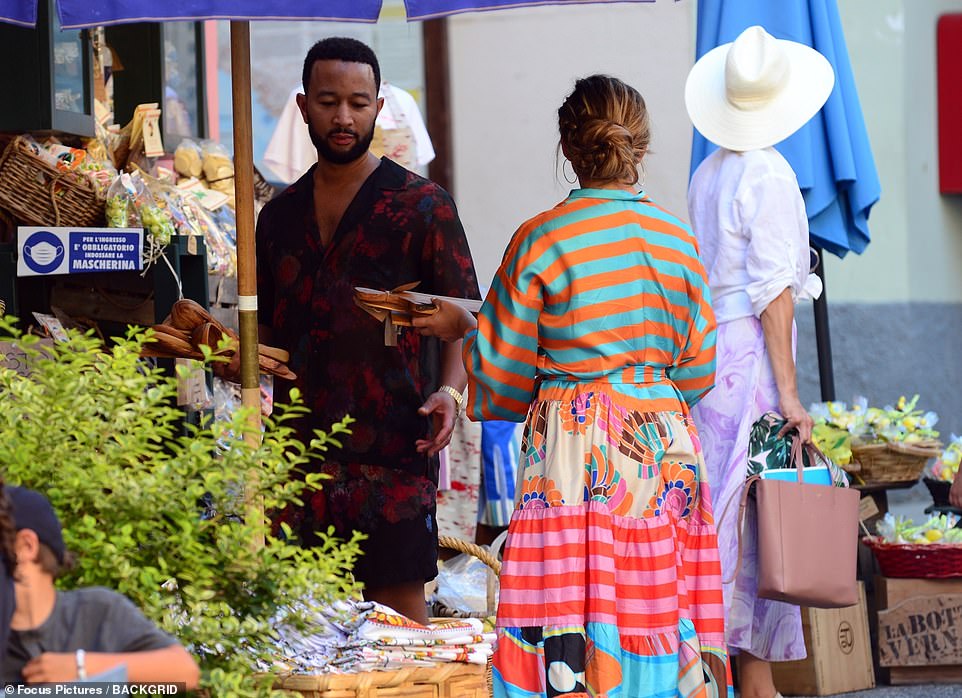 What do you think? Teigen presented her husband with some cutting boards 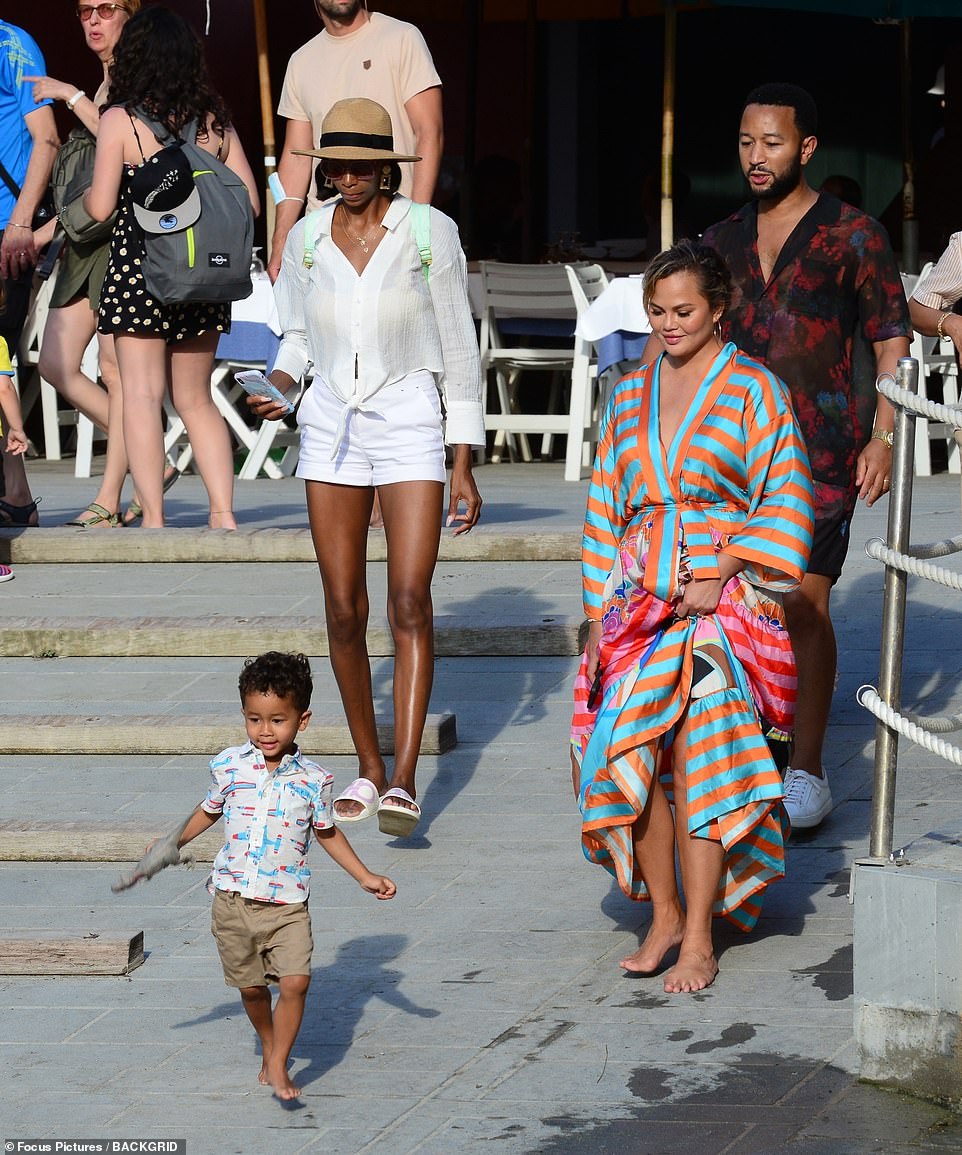 Out of sight, out of mind! The cyberbullying scandal back at home seemed like a distant memory for Teigen

Chrissy became embroiled in controversy in May after Courtney Stodden revealed the model had sent them a series of bullying tweets in 2011, when they were only 16.

In one of the caustic tweets, she urged Courtney, who is nonbinary and uses they/them pronouns, to take a ‘dirt nap,’ a euphemism for dying.

Chrissy subsequently issued an apology and went mostly silent on Twitter, however she has been posting with more frequency on her Instagram account in recent days. 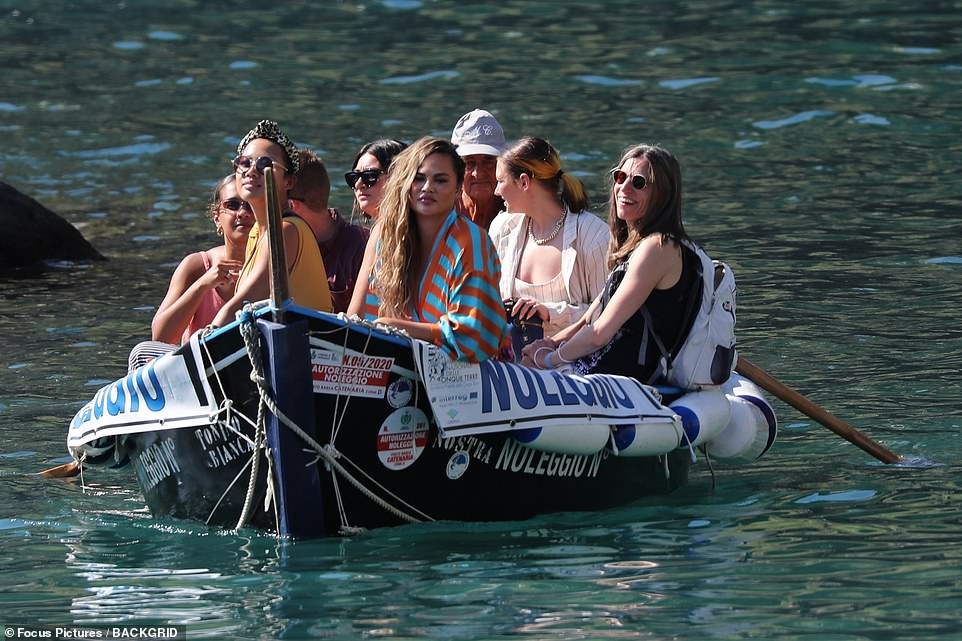 Anchors aweigh! The family checked out the views on board a boat 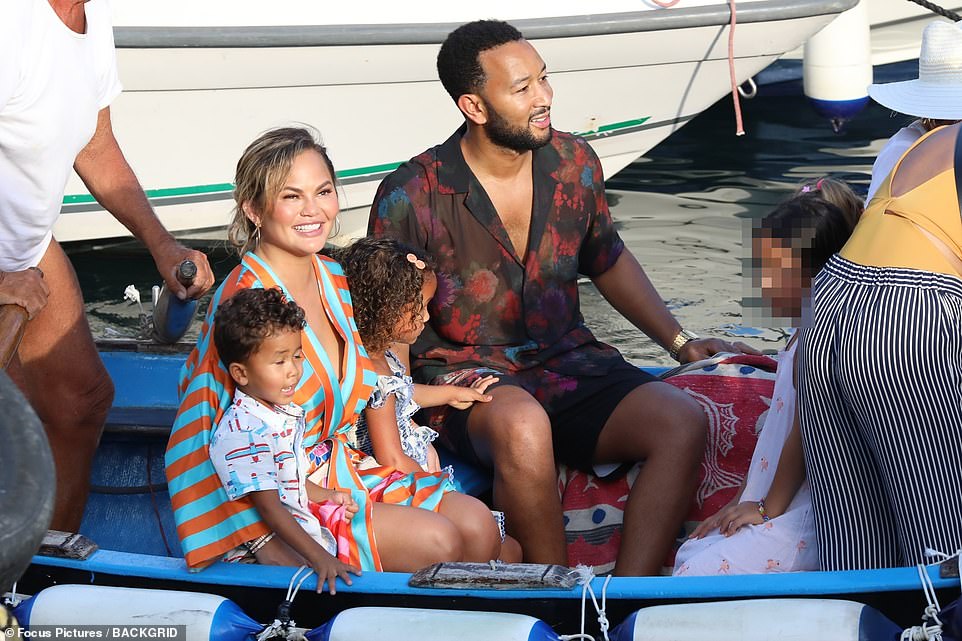 Say cheese! The stunner beamed with joy as she enjoyed quality time with her children 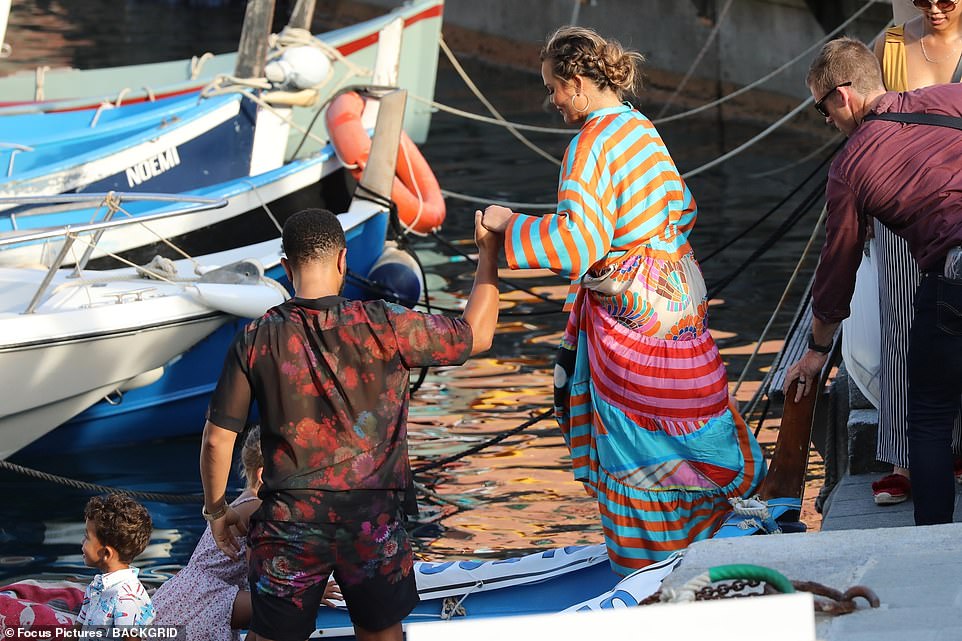 After you! John helped his wife onto the boat 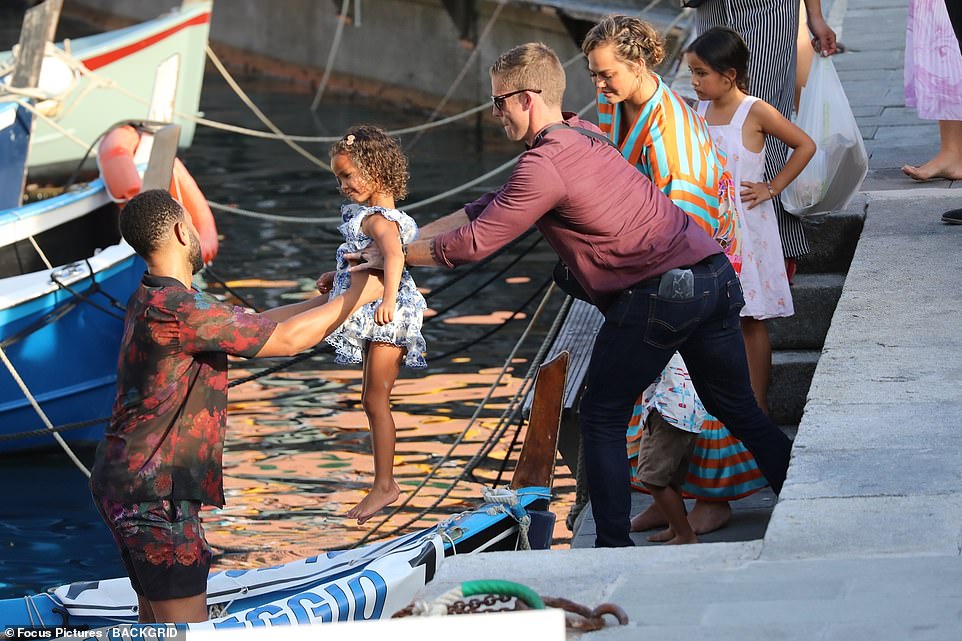 Your turn! An assistant helped Luna into the arms of her father

The drama continued in June when Project Runway designer Michael Costello alleged she had sent him a series of bullying direction messages and hounded him over a photoshopped racist social media post.

He claimed to have suffered suicidal thoughts brought on by the online harassment and the damage it allegedly did to his business.

But Chrissy defended herself and insisted the messages Michael posted had been ‘fabricated.’

The Cameroonian singer Dencia joined in on the bullying scandal when she claimed that Chrissy had pushed her twice at the 2016 Grammy Awards after allegedly believing that the singer’s assistant had recorded her on his phone. 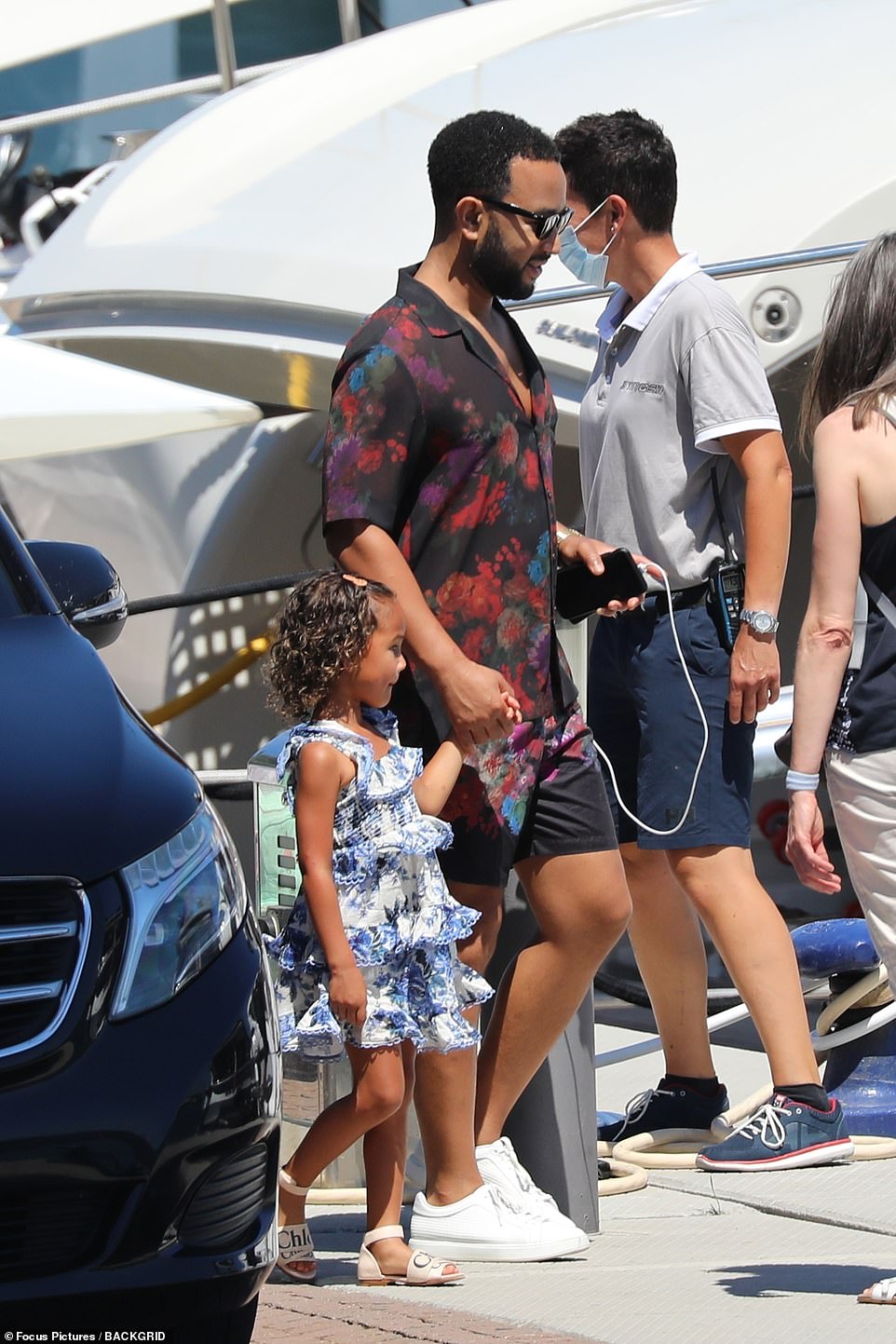 Doting dad! Legend kept a close eye on his little girl as the duo held hands 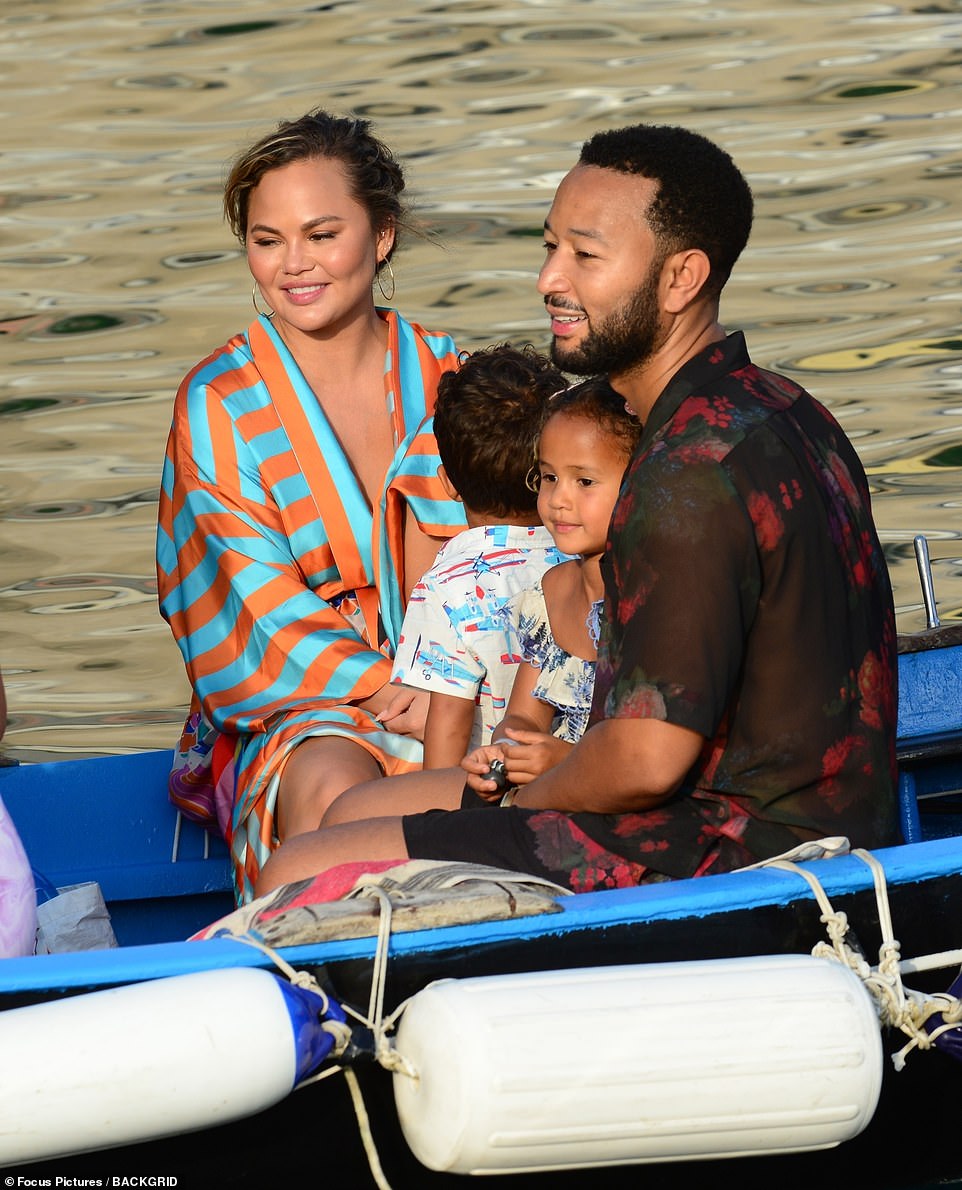 Peaceful: Teigen and her husband relaxed during their day on the water 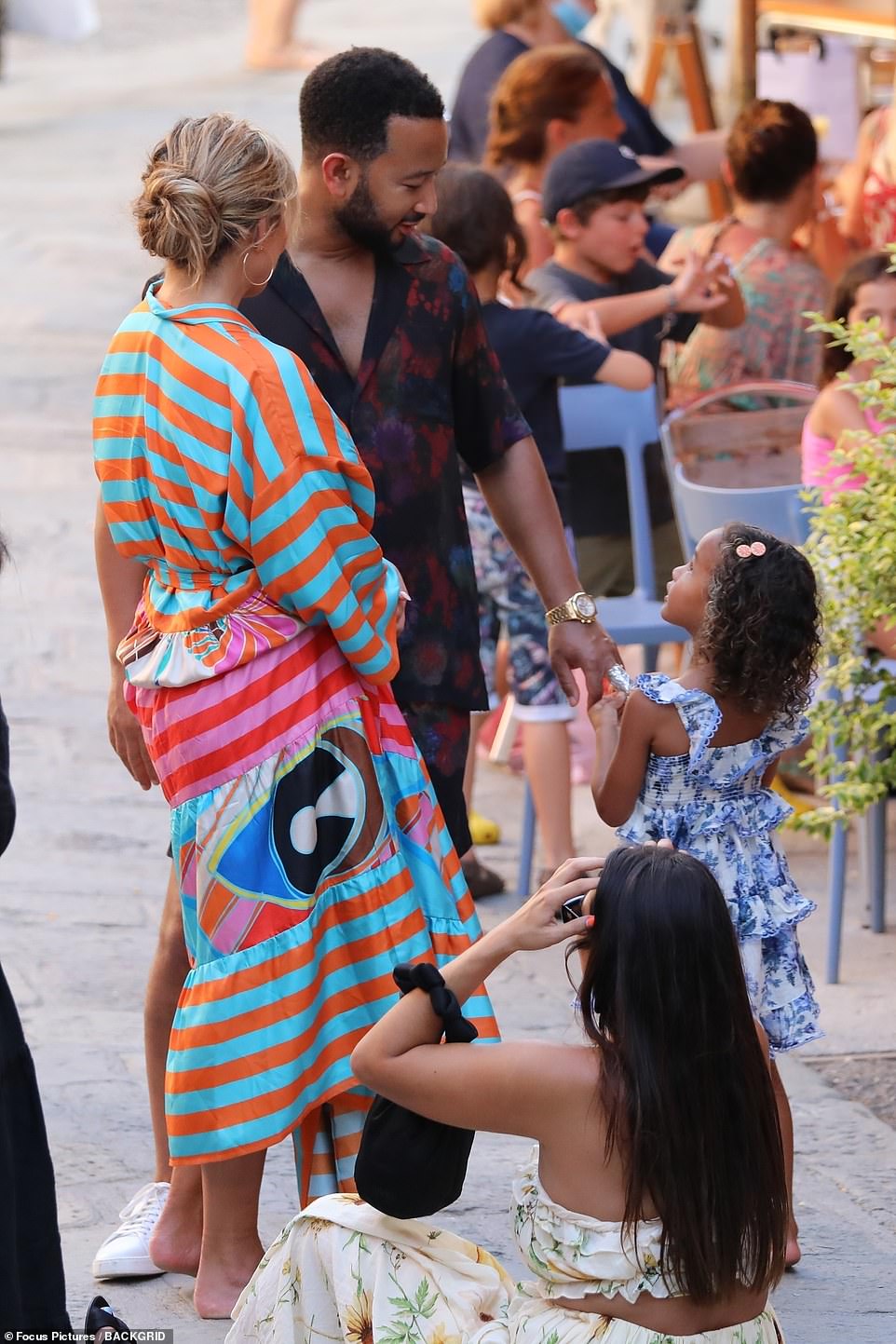