Jordyn Woods turned up the heat as she plugged her fitness app using a tropical thirst trap on Sunday.

The 24-year-old model showcased her killer curves as she modeled a thong bikini to promote her wellness app FRSTPLACE.

Several months ago, Woods found herself subject to plastic surgery rumors after she showed off a jaw dropping body transformation which she attested to exercise. 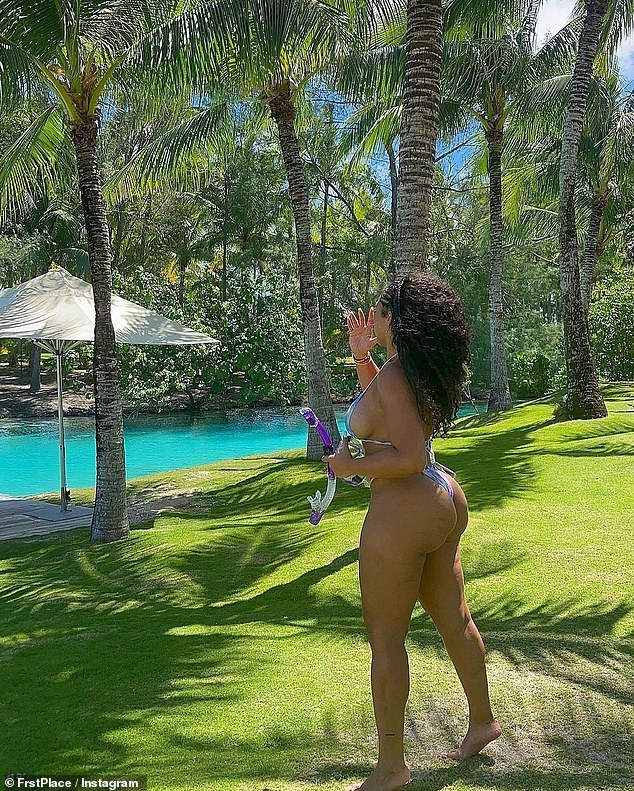 Killer curves: Jordyn Woods, 24, turned up the heat as she plugged her fitness app FRSTPLACE with a tropical thirst trap in a thong bikini 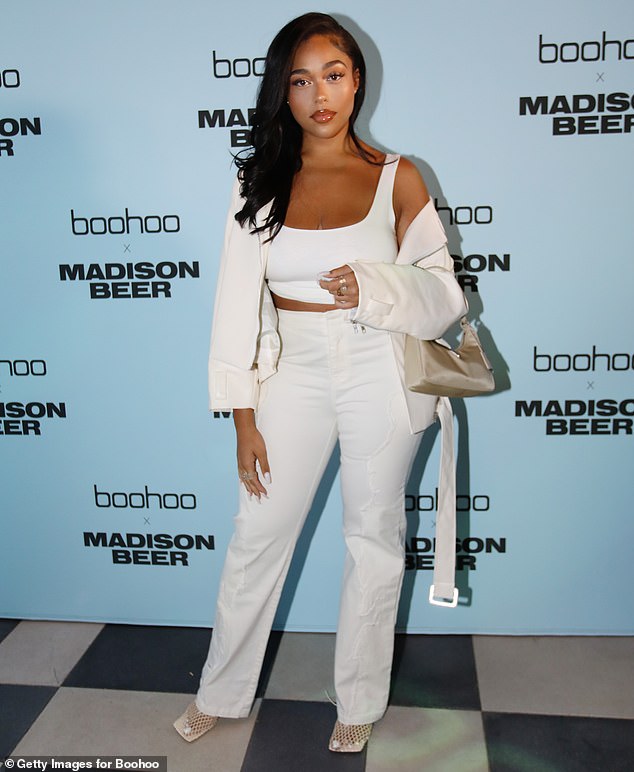 Healthier lifestyle: Several months ago, Woods found herself subject to plastic surgery rumors after she showed off a jaw dropping body transformation which she said was the result of exercise; pictured August 2021

She modeled a metallic string bikini which showed off her backside and a bit of side boob, while clutching a snorkel in hand.

‘FRSTPLACE founder @jordynwoods is serious goals,’ the app wrote as they shared the image on Instagram, which she additionally reposted to her Insta-story.

The former BFF of Kylie Jenner had most notably promoted her business venture several months ago using a before and after series which fueled rumors she had gone under the knife. 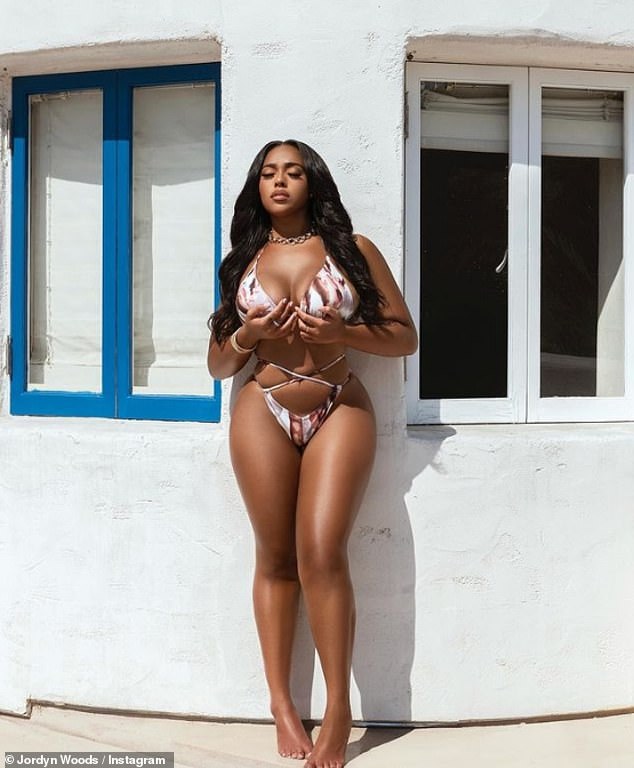 Headstrong: ‘It all started with a lot of mental and emotional work and the physical came with it,’ Woods had previously said of her body transformation over the years; pictured October 7 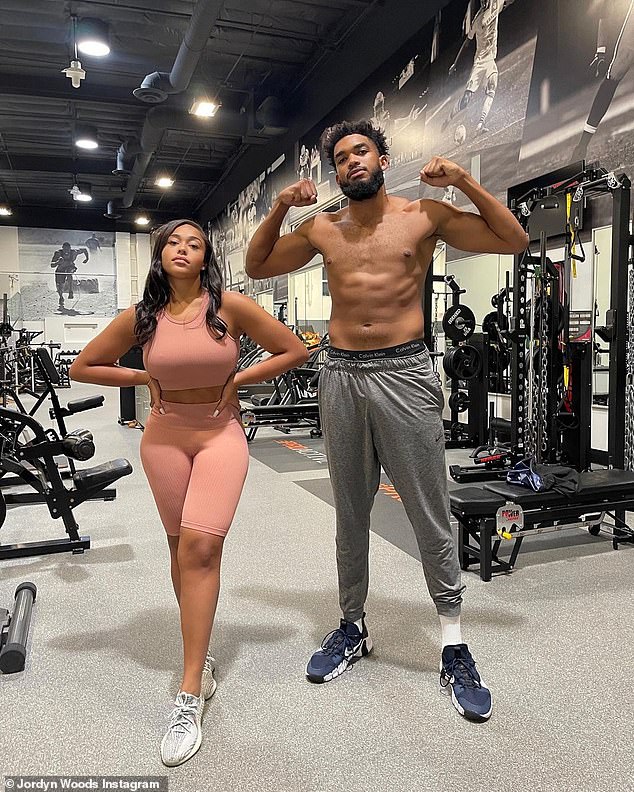 Got her back: ‘I’ve SEEN the hard work and I’ve seen the results and trust me, this is all natural,’ her boyfriend Karl Anthony Towns said in her defense

‘Sheesh, I got this photo sent to me by the @frstplace team and I look back and have to realize I came a long way and it didn’t happen overnight!,’ she wrote in a September post.

‘I can’t even believe I’m posting this but this is really me and this is my journey. Hopefully this can inspire some of you! It all started with a lot of mental and emotional work and the physical came with it. We all start somewhere.’

After many were quick to allege that her transformation was aided with the help of plastic surgery, her boyfriend of over a year, Karl Anthony Towns, came to her defense on Twitter.

‘Are we saying that women can’t work hard and transform their bodies?? I’ve SEEN the hard work and I’ve seen the results and trust me, this is all natural,’ the NBA pro said. 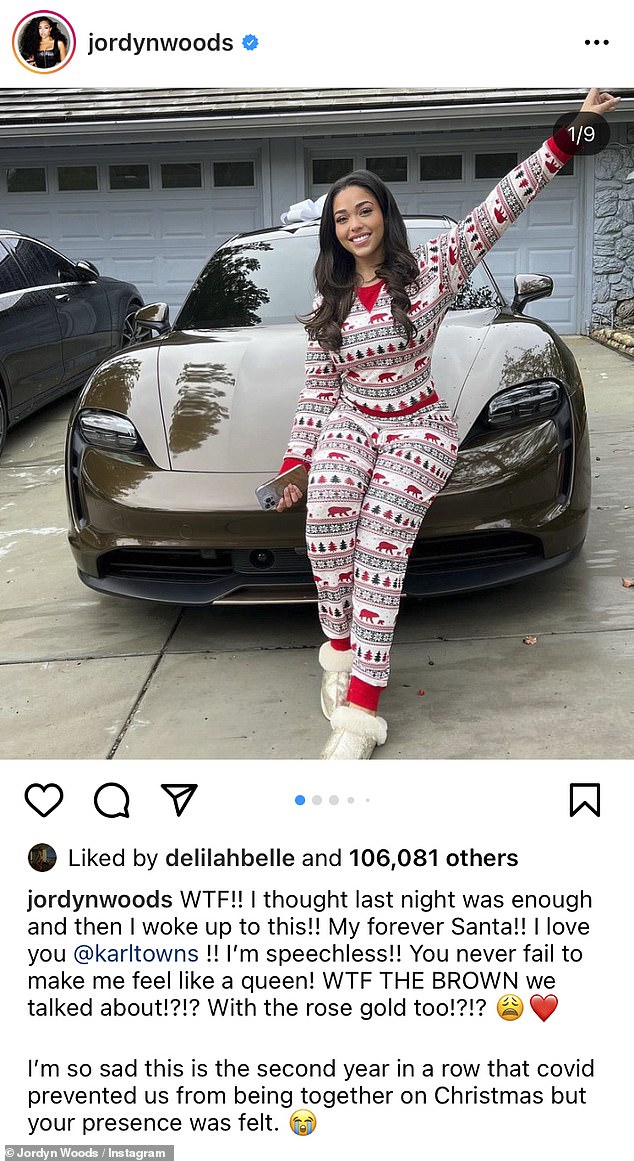 Tis the season! For Christmas, Karl gifted her an $80,000 plus Porsche Taycan in an eye-catching shade of brown, which she boasted about on Instagram while calling him ‘my forever santa’ 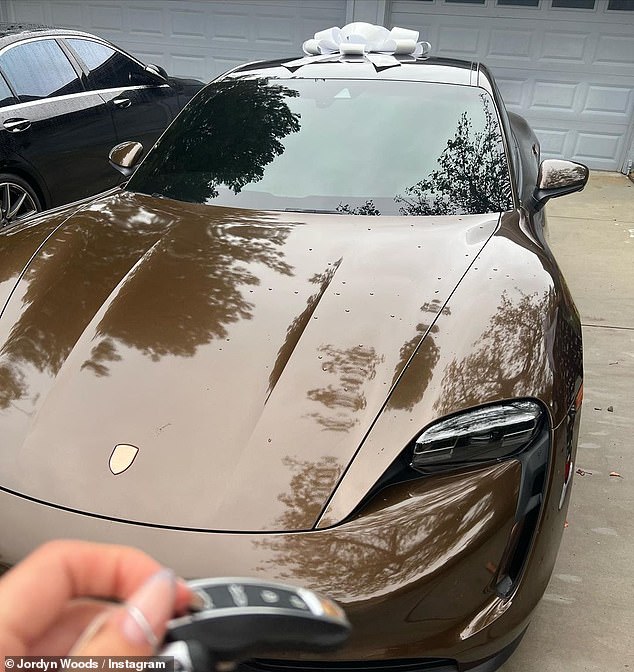 Luxury living: Jordyn’s new Porsche Taycan has a MSRP of $82,700 but depending on the model as well as added bells and whistles can cost around $200,000

‘Since she was 10 years old, people been calling this woman vile things because of her weight and instead of letting the Internet run her life, she went out the put the damn work in and changed her whole life. FITNESS SAVED HER LIFE!,’ he maintained.

On Christmas, Woods was spoiled rotten by the 26-year-old Minnesota Timberwolves player who splashed out on over $100K worth of gifts.

Most notably he gifted her an $82,000 plus Porsche Taycan, as well as a hefty heap of luxury bags fashioned by Balenciaga, Gucci, Prada and Judith Leiber as a ‘warm up’ for Christmas morning.

‘WTF!! I thought last night was enough and then I woke up to this!! My forever Santa!! I love you @karltowns!! I’m speechless!! You never fail to make me feel like a queen! WTF THE BROWN we talked about!?!? With the rose gold too!?!,’ she wrote of her new wheels. 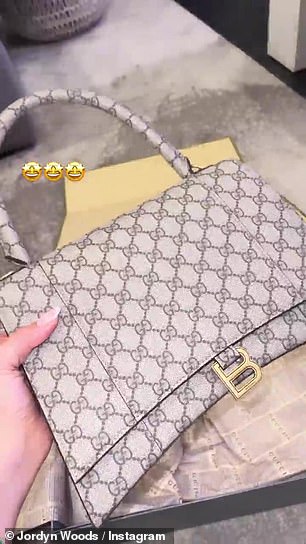 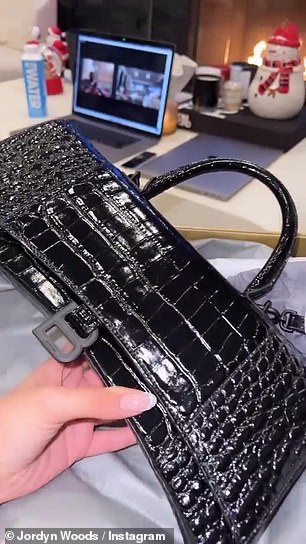 Balenciaga baby: Towns started off Christmas Eve with a bang as his lady love showed off a $2,600 Balenciaga hourglass handle bag and a $4,300 Gucci x Balenciaga bag