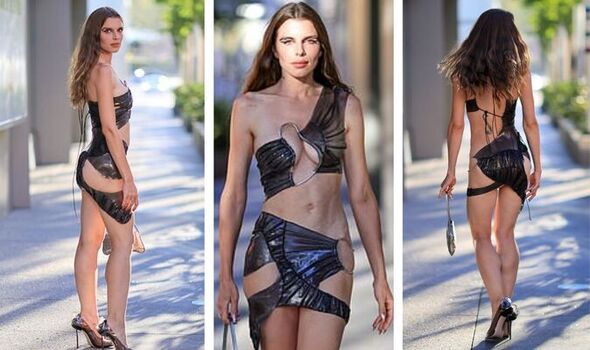 Julia Fox, who is an award-nominated actress best known for her appearance in Uncut Gems, has paraded a selection of costumes over the past few months. She has mentioned that her very eyebrow-raising new sense of style was inspired by Kanye West when she was dating him

Julia Fox is well known for her outrageous dress sense, having once stripped off at a Californian supermarket to use her jeans as a handbag instead of wearing them on her legs.

However, she surpassed herself with yesterday’s outfit, in which she donned a black latex outfit with so many cut-outs that it was abundantly clear she was neither wearing a bra nor pants.

Her cleavage spilled out of the off-the-shoulder top section, while the bottom half tied around her thighs with little more than silver metallic wiring and a tiny strip of latex.

The leggy 32-year-old’s frame was accented by a pair of see-through perspex heels, which had a black tint to match the rest of the outfit.

Her derriere was barely covered by the skimpy material although, unusually, the violin tattoo she wears on the back of her waist was firmly under wraps yesterday, making it one of the few parts of her body that remained fully covered.

Julia currently works as an actress, and will soon appear in The Trainer alongside Bella Thorne, Vito Schnabel and Gina Gershon. 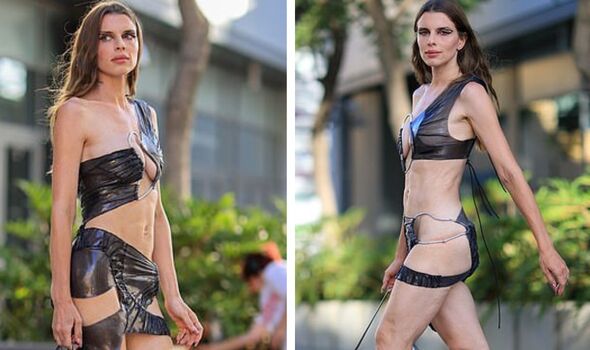 Julia Fox’s outfit did little to disguise her curves

Every outline of Julia Fox’s body was on clear display with this extra-revealing barely there outfit, which she paired with some transparent perspex heels 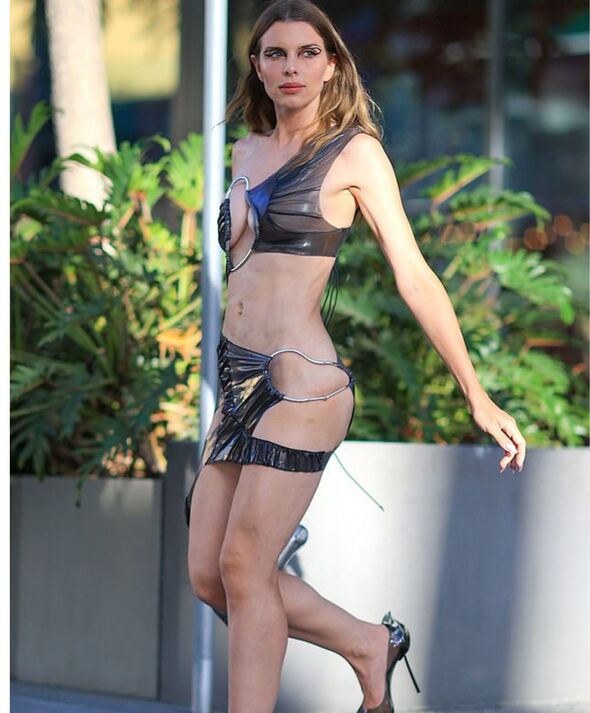 Julia Fox says she wants showing skin to be ‘normalised’

Julia Fox has told the world on Instagram that she would like flesh-flashing to become more normalised in society, claiming that “if it’s socially acceptable at the beach it should be the same everywhere”. 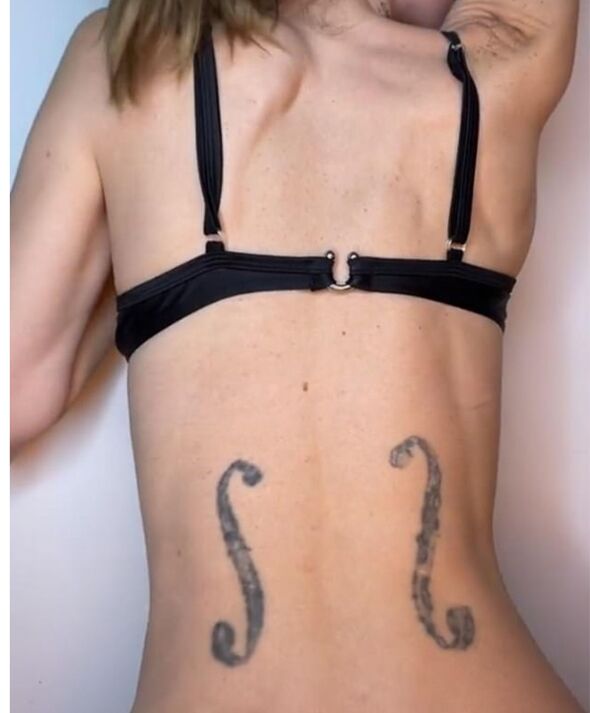 Julia Fox wasn’t showing off her back tattoo in her latest oufit, but she has had a distinctive violin pattern inked onto her waist (showed here on Tiktok). The model and actress was born in Milan, not far from the town of Cremona, which has a reputation of excellence for making musical instruments. Perhaps this is what inspired her choice of tattoo. 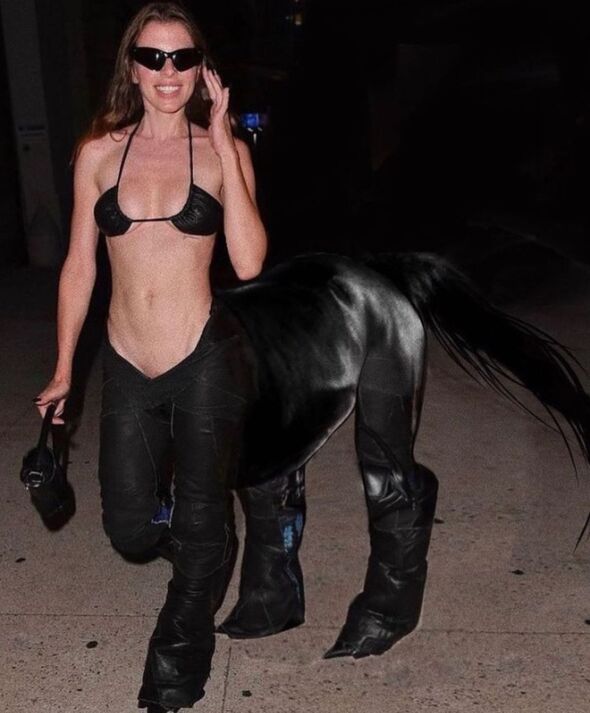 Julia Fox as a centaur

When Julia Fox stepped out with Kanye West earlier in the year, the shape pof her leather outfit caused her to be compared to a centaur. Not to be outdone, Julia then transformed another photo using some Photoshop wizardry to appear as an actual centaur. The actress jokingly used the word “Sleigh” beside her pic 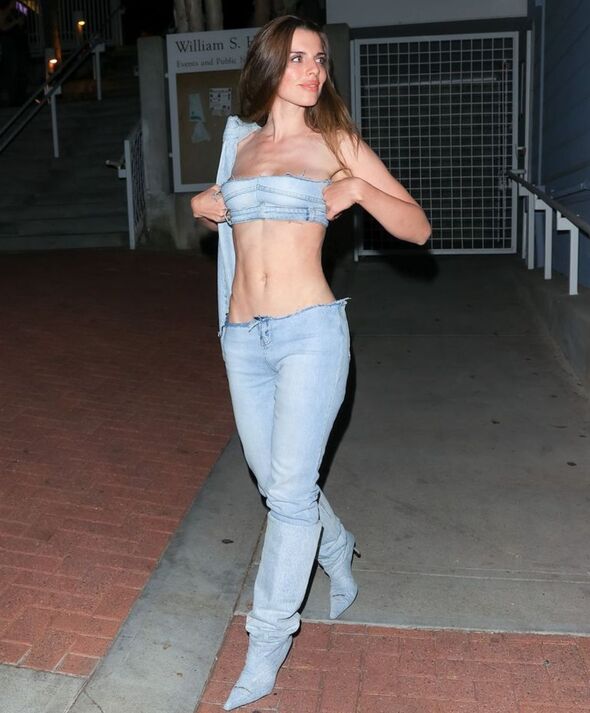 Julia Fox fashioned her jeans into a crop top

Once announcing on Instagram that she’d grown temporarily tired of latex, Julia Fox made it her mission to shock with denim instead. She cut the waistband of a pair of high waisted jeans off, due to her penchant for extremely low rise trousers, and fashioned the strip she’d cut off into a bandeau top 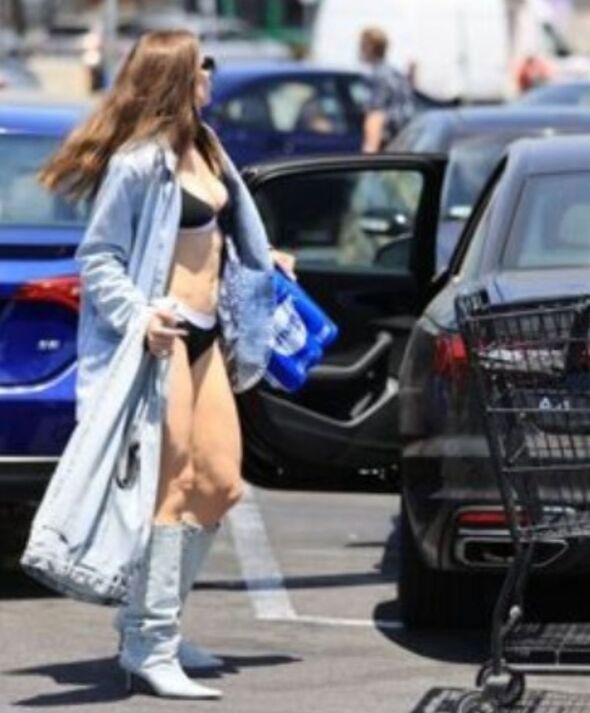 Julia Fox does a spot of supermarket shopping in her underwear

Perhaps not the usual scene in a supermarket carpark. Julia Fox stripped down to her bra and pants before transforming the jeans she’d previously had on into a handbag for her shopping trip