Kate Garraway has opened up about the mental health toll of providing continual care for her husband Derek Draper.

The Good Morning Britain presenter has well-documented Derek’s gruelling health battle since he fell seriously ill with Covid in March 2020.

Derek, a former political lobbyist, was placed in a medically induced coma and spent several months in hospital recovering before being released a year later. However, the virus caused significant damage to his body, including his lungs and heart, and Derek, 55, requires round-the-clock care from a nursing team and Kate herself.

Kate, 55, has brought the cameras inside her home to share the realities of her everyday life for two ITV documentaries – 2021’s Finding Derek and the follow-up Caring For Derek, which aired this year.

In a new Instagram post to mark World Mental Health Day, Kate revealed the toll the whole ordeal has had on her over the past two years.

Speaking in a video, the TV presenter explained: ‘So I haven’t chatted to you all for a while and I haven’t talked at all about the fantastic nomination which I am so grateful for, for Caring for Derek the documentary for a National Television Award. 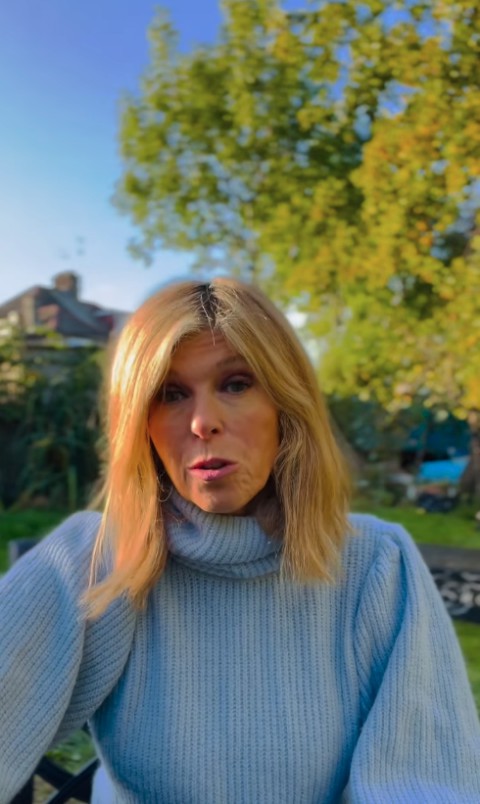 ‘I am so grateful to everyone who’s voted to get it this far and chuffed to bits. But the reason I haven’t spoken to you about it is because I felt sort of conflicted because I feel as though I have had a lot of support from friends and family and from all of you and I just felt bad in a way for asking for more. But then several carers charities have been in touch with me and said “no you must”.

‘Today is mental health awareness day and in the documentary you saw me frustrated, depressed, emotional and I have been all of those and more.’

She continued: ‘That’s the thing about caring, you want it to carry on because you want the person to be surviving and still with you so that you can still care for them but there isn’t an end point and it doesn’t get any easier.

‘Not for me, but for all those millions affected by caring… that’s the reason why I’d like you to go back to the documentary.’

In the caption, Kate said she was ‘so chuffed’ that Caring Derek has received an NTA nomination with the winner revealed at the awards ceremony on Thursday.

‘We made the film to highlight the challenges and rewards of being a carer, but since then things haven’t got any easier either for Derek and I, nor for the millions of other carers right across the UK,’ she added.

‘@carersfirst have done some research & the economic crisis has left many feeling suicidal , hundreds of thousands with mental health issues & more than 93 percent say they can’t sleep because they are so terrified about the future.

‘On #worldmentalhealthday I have been thinking about what so many are going through. If you haven’t seen #caringforderek it is still on the @itv hub . And if you feel moved to vote, then the link is in my bio – carers and anyone with a long term illness would feel so grateful not to be forgotten 🙏 #carers #heroes,’ she continued.

It comes after Kate revealed that Derek is still ‘very damaged’ from the affects of the Covid and his health issues. In August, Derek had ‘life-threatening sepsis’ and was placed in intensive care while back in hospital for a ‘serious operation’ on his kidneys.