‘There will be people watching whose grief is still very raw from losing people’: Kate Garraway shares ‘visceral reaction’ to Matt Hancock on I’m A Celeb… amid Derek health battle

Appearing on Good Morning Britain on Thursday, Kate, 55, whose husband Derek Draper’s body is still ravaged by having contracted Covid, spoke on behalf of those affected by coronavirus.

The UK has had the highest number of deaths from coronavirus in western Europe. In terms of rate of coronavirus deaths, the UK has recorded 282.4 deaths per 100,000 population. 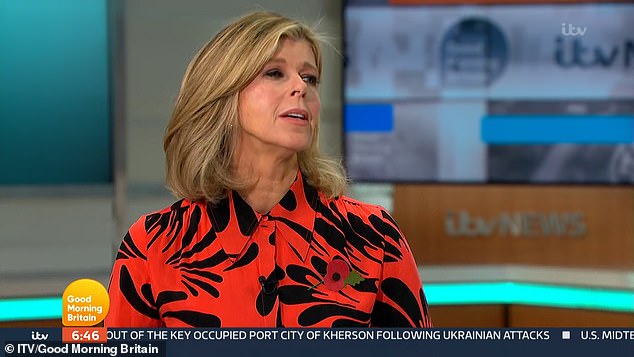 ‘There will be people watching whose grief is still very raw from losing people’: Kate Garraway shared ‘visceral reaction’ to Matt Hancock on I’m A Celeb… on Thursday amid husband Derek Draper’s health battle

And following Kate’s own I’m A Celebrity stint in 2019, Susanna Reid asked what Kate’s reaction would be if she had been in the camp this year when Matt Hancock walked in.

She replied: ‘I think instinctively, me personally, would want to talk to him and ask him questions about it and try to get to the bottom of how he thought about it.

Derek is one of the UK’s longest-suffering patients of Covid after being admitted to hospital with the virus in March 2020, only returning to the family’s London home in April 2021, where he receives round-the-clock care. 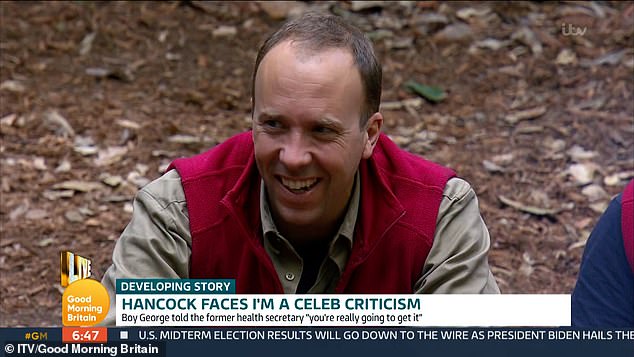 Is it appropriate? And following Kate’s own I’m A Celebrity stint in 2019, Susanna Reid asked what Kate’s reaction would be if she had been in the camp this year when Hancock walked in

Kate added: ‘There’s a very visceral gut reaction to Matt Hancock as he’s there as a very famous face of the time that was miserable for the entire country and we’re still living with the consequences of.

‘There will be people watching whose grief is still very very raw from losing people.

‘They won’t see that rawness of grief and sadness in the way that Matt Hancock is behaving on screen, because he’s laughing and having fun and trying to get to know a new group of people. 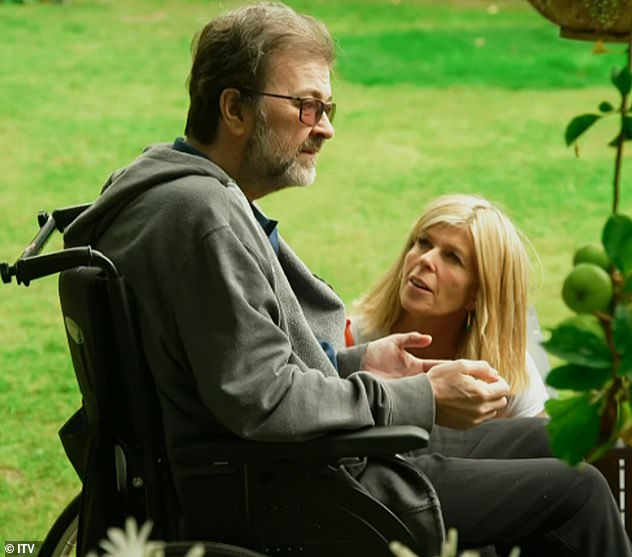 ‘I think if they don’t see that, they are going to not feel healed in any way. I kind of wonder if that’s what Matt Hancock’s motive might be – to show people he does care. Not just heal his career, but heal a time people are still bleeding from.’

Matt entered the show on Wednesday night – and fell on a bridge – but several of the contestants said they wished they could have quit the show when he entered.

Charlene White wondered why he had come on the show when the Government has been stable ‘for five minutes’. 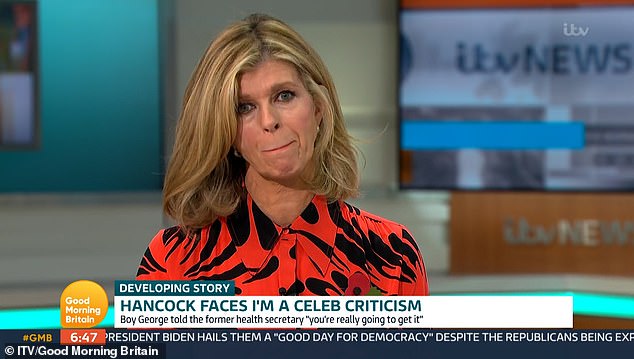 Kate said: ‘There’s a very visceral gut reaction to Matt Hancock as he’s there as a very famous face of the time that was miserable for the entire country and we’re still living with the consequences of’ 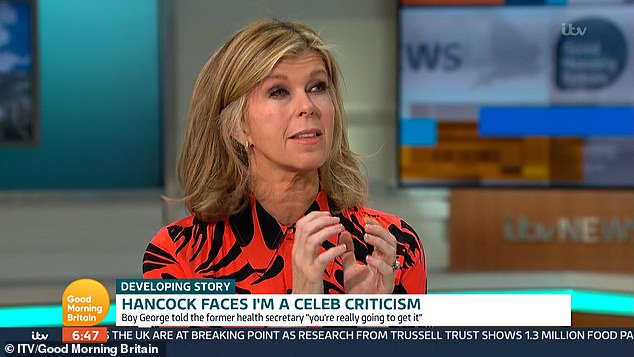 Adding: ‘There will be people watching whose grief is still very very raw from losing people. ‘They won’t see that rawness of grief and sadness in the way that Matt Hancock is behaving on screen, because he’s laughing and having fun and trying to get to know a new group of people’

Chris Moyles said he had ‘taken a few weeks off his job’.

Boy George said his mum could have died from Covid and he would have walked from the show if that had happened.

Owen Warner said to Babatúndé Aléshé: ‘Do you have any strong views on the geezer?’

Babatúndé replied: ‘It’s hard to kind of push your views aside, it really is, because of the many people whose lives have been affected. But, at the same time, we’ve got to be welcoming and we’ve got to treat people as humans obviously.’

Coronation Street star Sue Cleaver said to Boy George and Mike Tindall of Mr Hancock: ‘He sticks out like a sore thumb.’

A spokesperson for Matt Hancock told MailOnline on Thursday: ‘The second reading of Matt’s Dyslexia Screening and Teacher Training Bill is just days after I’m A Celebrity… finishes.

‘By going on the show, Matt hopes to raise the profile of his dyslexia campaign and will use the platform to talk about an issue he really cares about in front of millions of people. Matt is determined that no child should leave primary school not knowing if they have dyslexia.

‘As soon as Matt’s time in camp is up, he will return to Suffolk to hold surgeries where he will catch up with his constituents and discuss matters of concern.

‘Matt will be making a donation to St Nicholas Hospice in Suffolk, and causes supporting dyslexia – including the British Dyslexia Association, off the back of his appearance. He will, of course, declare the amount he receives from the show to Parliament to ensure complete transparency, as normal.’

Kate revealed she and Prince Charles had got ‘relatively close’ at the Prince’s Trust Awards on March 11 – Charles was diagnosed with coronavirus in mid-March.

‘He said he had a headache, numbness in his right hand, and was struggling to breathe,

‘I rang Dr Hilary (Jones) and tried to get through, he talked to Derek. He said put me back on, I think you need to call an ambulance’

Derek, 52, was taken into hospital on March 30 and remained in an unresponsive condition.

Kate and her children isolated at home after she displayed ‘mild symptoms’.

‘I’m afraid he is still in a deeply critical condition, but he is still here, which means there is hope.’

Kate said: ‘The journey for me and my family seems to be far from over as every day my heart sinks as I learn new and devastating ways this virus has more battles for Derek to fight.

That month, Kate and her family took part in the final clap for carers

She said: ‘I’ll never give up on that because Derek’s the love of my life but at the same time I have absolute uncertainty’

On June 5, Kate revealed Derek is now free from coronavirus but continues to fight against the damage inflicted on his body

On July 5, Kate revealed Derek has woken from his coma but he remains in a serious yet critical condition.

On July 8, she announced she would be returning to GMB, after being urged by doctors to ‘get on with life’ during Derek’s recovery.

She added that Derek had ‘opened his eyes’ after waking from his coma, but has been told his recovery could take years.

On July 13, Kate returned to GMB for the first time since Derek was hospitalised.

On August 14, Kate reassured GMB viewers that Derek was ‘still with us,’ but it was ‘a waiting game.’

On August 19, Kate revealed she celebrated Derek’s birthday with their two children, and described the day as ‘challenging’ for her family.

At the end of September, Derek reportedly becomes the longest surviving patient with coronavirus after spending 184 days in and out of intensive care.

Kate reveals Derek has lost eight stone during his battle.

The presenter announces she is returning to her Smooth Radio show so Derek can hear her voice.

On October 30 Kate reveals that Derek has spoken for the first time in seven months, saying the word ‘pain’ to his wife, who watched on ‘in tears’ over FaceTime.

Kate says a day later that her husband no longer needs a ventilator to breathe.

Kate reveals her family car has been stolen in latest ‘body blow’ to her family life, as kind-hearted fans offer their cars to help.

She says she feels ‘physically sick’ at the prospect of facing her first Christmas without Derek.

The GMB star tells viewers it is her dream to visit Derek on Christmas Day.

She also reveals she missed two weeks on GMB after her children were exposed to the virus, but thankfully she and the kids tested negative.

On December 17, Kate has an emotional conversation live on GMB with two nurses who treated Derek when he was first admitted to Whittington Hospital in North London.

On New Year’s Eve she reflects on a ‘calamitous’ Christmas without Derek, as her house was flooded and she struggled to get a food delivery slot until her pal Emma Willis stepped in to help.

Kate reveals she and her children got to visit Derek in hospital over the Christmas period, and it was the first time her family had seen him since he was hospitalised.

She also says she’s banned from seeing him due to new restrictions introduced during the government’s third lockdown.

Kate revealed that was in the process of adapting her home to suit Derek’s needs when he is finally released from hospital, in the ITV documentary Finding Derek.

The programmed was praised by viewers for offering a heartbreaking look at the long-term effects of coronavirus.

Kate revealed that Derek was finally allowed to leave hospital, but would require round-the-clock care once he was returned home.

Kate revealed that despite now being home with his family, his communication abilities were ‘minimal’ and he ‘couldn’t really move’

During an appearance on Piers Morgan’s Life Stories, Kate revealed that Derek had said ‘I love you’ for the first time.

After celebrating Christmas, Derek was also pictured in a wheelchair during a trip to the pantomime with his family

Kate revealed that Derek was ‘very fatigued’ and ‘very weak’ following the family outing, adding: ‘I don’t know what this year is going to bring.’

She also revealed that Derek would die within three days if he was left alone to care for himself.

On July 6, Kate revealed that Derek had been re-admitted to hospital after suffering a ‘downturn,’ and in a later interview said she takes things ‘day by day.’

On July 20, it was reported that Kate had pulled out of hosting Good Morning Britain to be at Derek’s bedside after he took a ‘very serious’ turn for the worse.