Katie Holmes cut a casual figure as she left her SoHo apartment on Friday.

The actress, 42, was spotted rocking a semi-sheer white T-shirt which flashed a hint of her blue bra.

The Dawson’s Creek star was also seen carrying her furry best friend, her chihuahua Honey, while out in Manhattan. 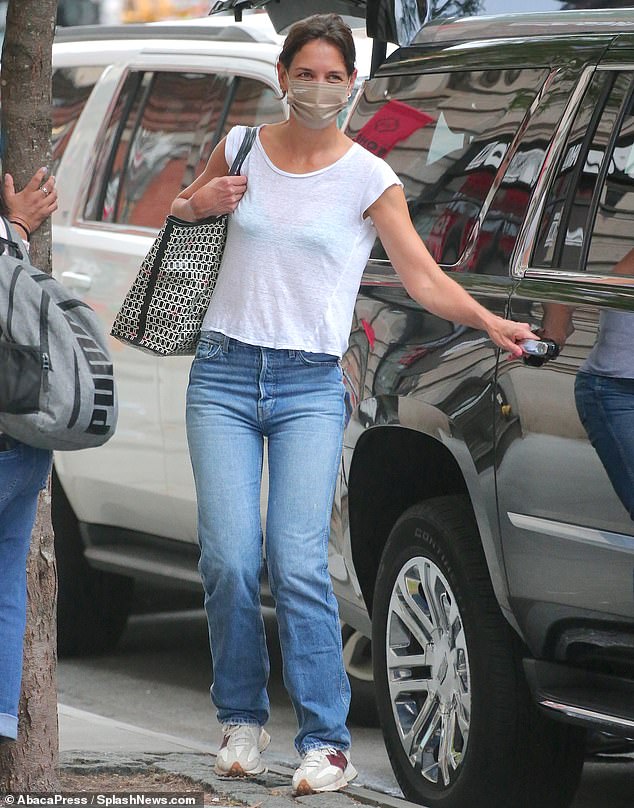 Dressed down: Katie Holmes cut a casual figure when she was spotted leaving her apartment in Soho

The brunette beauty tied her hair back in a slightly messy ponytail and carried a black and white patterned tote bag.

She accessorized with several small gold hoop earrings and covered her face with a beige mask.

The Ohio native displayed a bright pink manicure as she opened the passenger door of her waiting SUV. 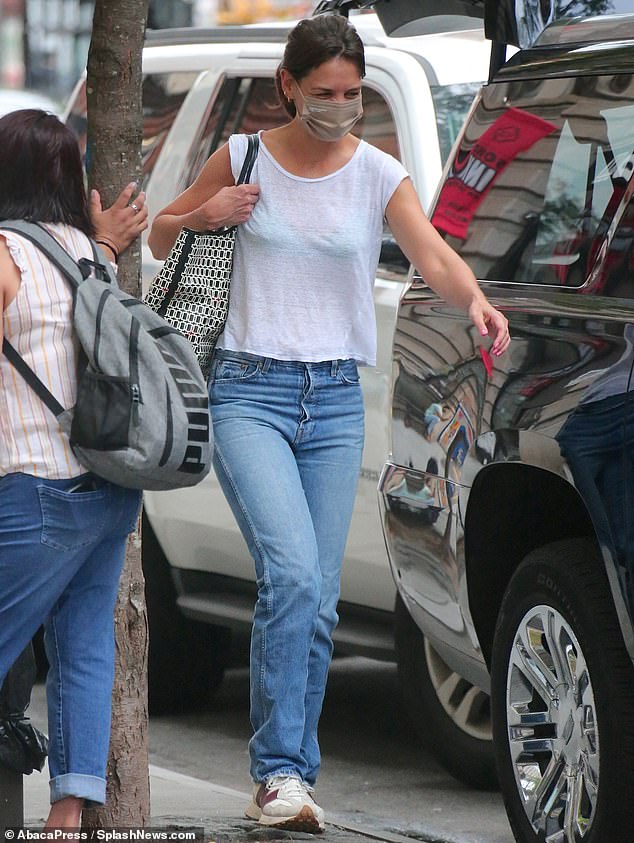 Casual: The 42-year-old actress was clad in a semi-sheer white t-shirt over a blue bra as she headed to her car on Friday

Katie later wore a camel peacoat over her dressed-down ensemble and cradled her dog as she walked across the sidewalk.

The Batman Begins actress adopted the brown and white rescue pup for her daughter Suri, now 15, back in 2014. Honey went missing shortly after being taken in by Katie and her child with Holmes offering $1,000 reward for her safe return.

The pooch was fortunately found alive and well a few days later.  The famous family later adopted another dog and are frequently seen walking their pups on the streets of New York City. 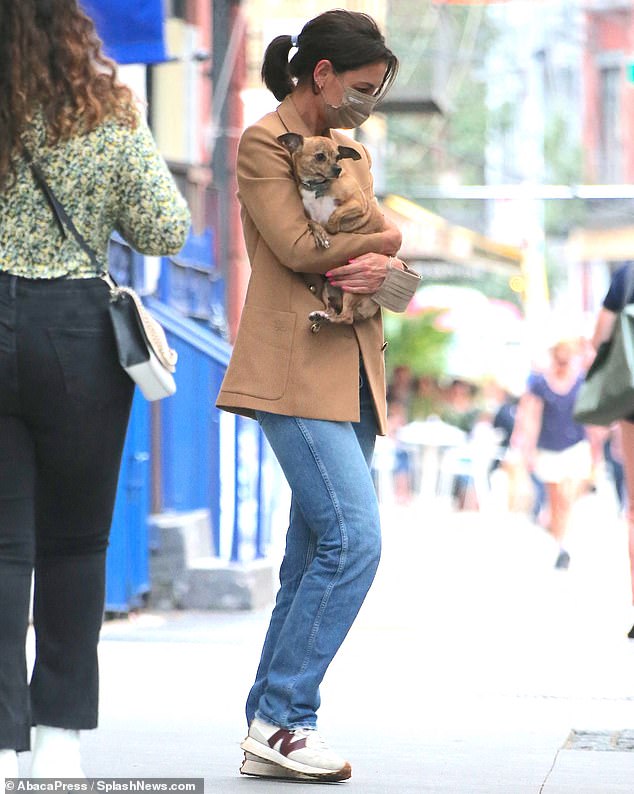 Puppy love: The Dawson’s Creek star was also seen carrying her chihuahua Honey while stepping out in Manhattan 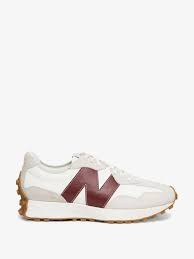 The story will follow an FBI special agent who tries to rebuild her career after an illicit affair damages her professional reputation.

Her other project, also still untitled, is a romantic drama following two strangers both in bad relationships who end up at the same Airbnb in upstate New York. 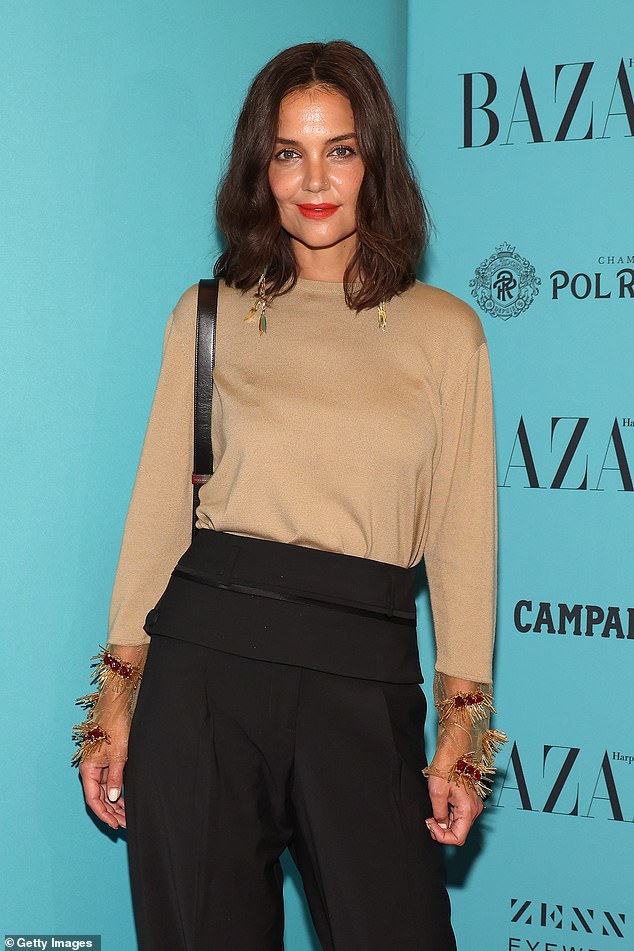 While the new film serves as Katie’s feature film writing debut, she has previously helmed one other movie – the 2016 drama All We Had.

Katie shares Suri with ex Tom Cruise. She split from Emilio Vitolo Jr., 33, in April after nine months of dating.

‘They figured out they’re better off as friends. There’s no drama that went down with the breakup and in fact, they’re still friends,’ a source told Us Weekly at the time.

Emilio collaborates with his father to run the popular Italian restaurant Emilio’s Ballato, a favorite of celebrity visitors including Tom Hanks, Bradley Cooper and even former president Barack Obama.

His romance with Katie reportedly faded after she left for Connecticut to film her second feature as a director.

She stars in the untitled film with Jim Sturgess as two strangers stuck in unhealthy relationships who find themselves forced to quarantine together at an Upstate New York Airbnb, according to Deadline.

According to ET, Katie took a ‘wait and see’ approach to her relationship while she was out of the state filming.

‘Before she left, [Katie and Emilio] were inseparable, but their relationship was existing in a bubble,’ said an insider. ‘Because of the pandemic, she wasn’t jet setting around the country for jobs and he wasn’t tied up every night working at his family’s restaurant.’

But once their regular social lives resumed, the couple found they were not ‘as compatible anymore.’ 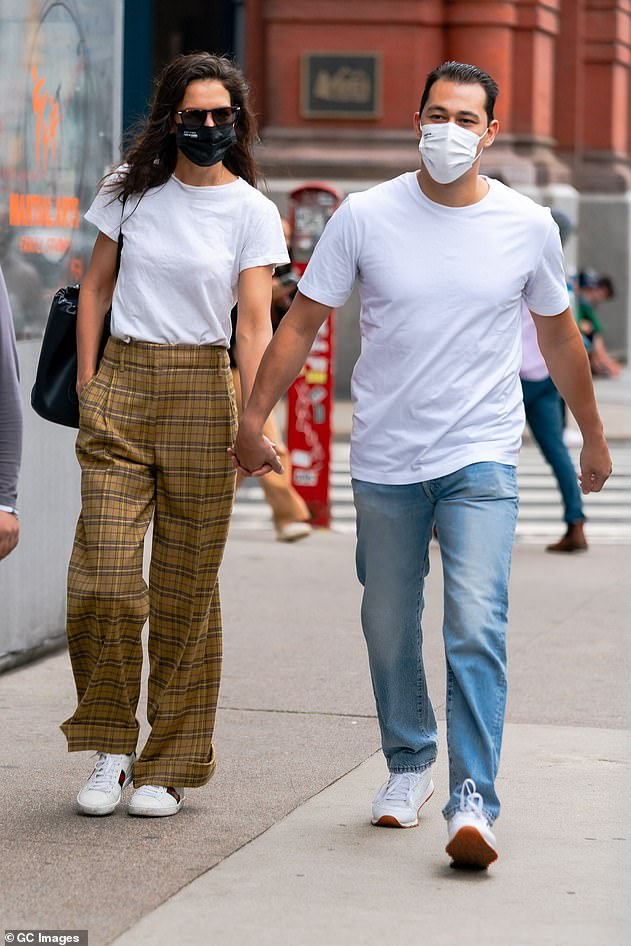 Breakup: Katie split from Emilio Vitolo Jr in April after nine months of dating (pictured together in October 2020)